But I Know I'm Gonna Change That Tune, When I'm Back on Top, Back on Top in June.

What's going on here? It's gettin' so a person can't even enjoy his misery in peace! 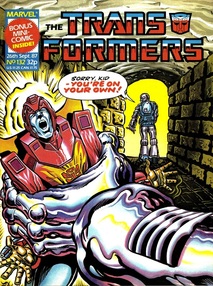 On the surface we seem to be faced with a rather inconsequential issue this week, as a one part story (not only the first one parter since Christmas, it's the first completely standalone 11 pages outside of the seasonal issues) it's almost the very definition of a throwaway issue. Indeed, it's more than likely one of the main reasons it exists is to make sure things synch up properly for the next Christmas issue. Coming as it does slap bang in the middle of a run of British stories that feed in and out of the Bigger Picture it's very easy to overlook.

This, as ever, is somewhat unfair, and this is a story that not only has an important job in dealing with some continuity issues created by the introduction of the Headmasters, but also is more influential than you'd expect.

The continuity issue is, on the surface, one that has such an obvious solution it might seem surprising it's been addressed at all. Kup, Blurr and Hot Rod have previously been firmly established as part of the future cast with no presence in the 1980's at all. However, unlike the repurposed Decepticon Targetmasters they're not specifically created in the future (the pack of elephants in the room of the last story that will require a longer build up to explain), so them hanging around in the present with Fortress Maximus shouldn't present any problems at all.

It's the Mysterons!
But the future stories are the backbone of the British stories at this point, and Hot Rod/Rodimus is on a particular character arc, the next piece of which begins in the following issue. Just having him and his counterparts reduced to minor speaking parts in the new backup is something that just isn't going to fly with readers.

So the firm purpose of this story is to extend the lives of the Autobot trio into the present (and indeed, several hundred years into the past), giving what are effectively the UK's lead characters a How It All Began story and putting the notion firmly into the readers mind that they're more important to Fortress Maximus than they will ever actually be shown to be in Uncle Bob's work.

It's also possible that, with the previous two parter being mostly focused on the Headmasters, Furman was required to do something a bit more Targetmaster-ey as part of the big new toy promotion, though he turns that to an advantage and completely ignores the new Targetmaster toys (and the gimmick itself) so as to deal with the issues of his own stories.

In terms of influence... Well, the story opens with Kup a washed up broken soldier give to hallucinations and bouts of psychotic rage. Does that sound familiar? This is basically how Nick Roche will introduce the IDW version to great success in a rather wonderful little Spotlight that finally- especially considering that fan artists had been used by the modern comics almost since the moment they came back- paved the way for writers from the fan community to get their foot in the door.  The current  brilliant work being done by James Roberts is in large part down to Roche getting things off to such a good start with his story influenced (albeit possibly unintentionally, it's fair to say the Marvel UK stories are in his DNA) by this one.

This is also the first Transformers story in any medium to actually look at the psychological consequences of endless war, something that the aforementioned James Roberts in particular has taken and run far and wide with. The idea that Cybertronians are virtually impossible to kill is fairly well established by this point, so Furman here looks at what happens when their minds break even if their bodies carry on indefinitely.
﻿﻿
The concept he comes up with to explore this is "Combat fatigue", where the endless killing and fighting finally saps the will of a Transformer leaving them an apathetic wreck, useless to anyone resulting in them being put out to pasture on a ship, drifting through space.

The sequences of Kup by himself, lamenting his lot in life and wallowing in his own misery are extremely well done and have a marvellously melancholy feeling to them. This is where Dan Reed excels as well, as what might otherwise be a fairly dull sequence visually is given a lot of flare as Kup sweats, contorts and is surrounded by hallucinogenic circles of light. All of which add nicely to creating the feeling of a character under deep stress and neuroses. ﻿﻿ 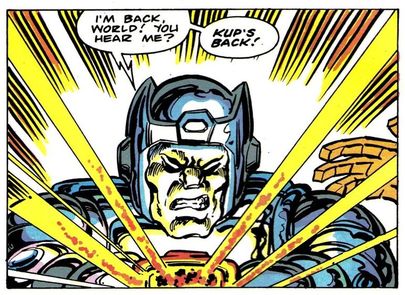 This is cured Kup.
It's almost a shame a plot has to intrude upon this character study. Though it's usually Reed's magnificently memorable multi-arm aliens that people tend to remember about this story, there are very few surprises when the main action kicks off. When Kup sees a ship under attack you know he'll briefly overcome his condition to save it. When sole survivor Hot Rod comes aboard and fails to convince Kup to help him rescue Blurr (in a tie-in to the backup they were scouting planets for Fortress Maximus when they were captured) you know he'll go himself, and when Kup realises this you know the cure for his plight will be to go save them.

Despite there being no surprises, this is very well done, with the banter between Kup and Hot Rod effectively setting up the best odd couple sitcom we never had; though as a sign of things to come for poor old Hosehead, Blurr winds up being pretty much just there.

Kup's cure is also not as pat as it might have been, when rescuing Hot Rod and Blurr he has a manic moment of pumping one alien full of holes long past the point of being dead and has to be stopped from carrying on by Hot Rod. The story may end in a superficially upbeat way, but there's an underlying feeling that all Kup has done is trade one neuroses for another, and he's only now considered sane because it's a psychosis his comrades all share. It certainly throws a new light on his blood lust in the first part of Ring of Hate!

The story ends with everyone bickering as they go to meet up with Fortress Maximus, neatly tying things into the backup and completing the story's job of bringing everything together neatly. But it's also a very good strong little adventure that is rather overlooked. 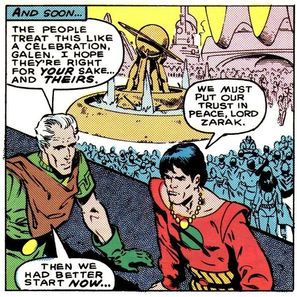 "You're not even a monkey from one of the films, just the TV show!"
Ring of Hate! Part 3 is mainly concerned with establishing our two main Nebulons: Lord Zarak and Galen (not to be confused with the monkey. Which is really difficult. Actually, with Planet of the Apes being so heavily merchandised it's not impossible that the name was still under 20th Century Fox's copyright, which may be another reason why it wasn't used for the toy even though that was clearly Bob's intent), something achieved through their debate about the threat posed by the alien visitors.

In a deft move, despite being the "Nice" one, Galen isn't devoid of common sense. He doesn't want to end Nebulon's eons of peace, but equally even when accepting Blurr (sans his speech impediment in this so him being chosen actually makes some sense) as Maximus' envoy he still works to have Duros and his palace guards keep civilians at a safe distance and to be prepared if things go wrong.

Zarak is equally not quite an out and out villain, he doesn't trust the Transformers (and having seen what they've done to Earth the reader has the advantage of knowing this mistrust is not misplaced) and is prepared to resort to trickery to expose them, but genuinely believes he's acting in the best interests of his planet.

And yes, him using a magnetic weapon to make it look as if Blurr is attacking a statue (complete with "BONK" sound effect that means this panel is the most widely seen part of the whole miniseries) just makes it even more obvious how much he looks like Magneto. Though his immaculate white quiff means he also has quite a striking resemblance to Max Clifford. For American readers... you don't want to know.

The issue ends with Galen reluctantly breaking out the vast amount of weaponry the Nebulons have kept locked up Just In Case and attacking the Autobots. Rather nicely- and of course completely unintentionally- we have things tie back into the lead comic as the issue closes with Kup being absolutely gleeful that the Nebulons are going to give him a fight. 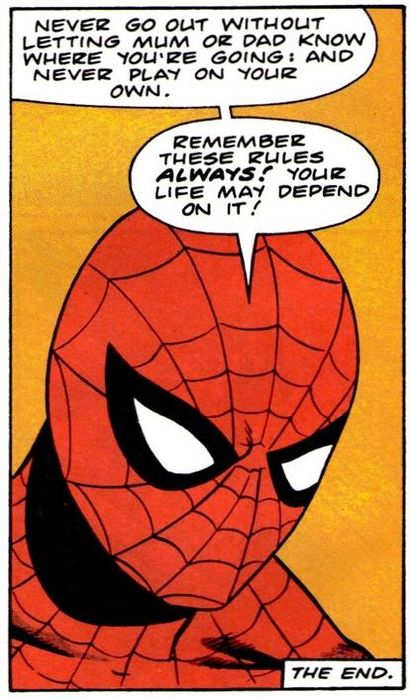 Also: Sending that letter to Jim'll Fix It would be a mistake.
Elsewhere, Transformation makes it clear that, as editor, Furman is aware that the issue of the reused Targetmasters is something readers are going to be concerned with and which does need addressing.

On Grimgrams a letter letter from Iain Craigen of Lancs asking about the Dinobots original names (for the record, Swoop is the only one to have changed) is used by Grimlock to recap the What's in a Name? Annual story. This isn't actually promotion for the hardback- indeed, it isn't even mentioned- it more seems to be about ensuring readers are well up to speed with its events before the regular book picks up on it in a month.

There's an extra special bonus this week as Furman (along with the returning Barry Kitson on art) gets to handle a major Marvel character for the first time with the pullout Spider-Man comic Children in Danger. This is a straightforward PSA with Spider-Man covering an American football game in the UK and rescuing a child who has gone off with a stranger (it is perhaps pushing it that any British child could be lured off with the promise of meeting some poor man's rugby players) before delivering a speech directly to the reader warning them of the danger.

It's a harmless enough story with its heart in the right place (though with one prominent member of UK fandom in the noughties recently jailed for prolific child molestation you have to wonder if all the readers got the right message), but from a grown up perspective the most interesting thing about it is that Spider-Man's status in the UK was so low at the time a page has to be given over to explaining who he is.

Next week- hopefully with less mention of convicted sex offenders- we begin the road to both dealing with the Cyclonus and Scourge problem and start the build up to the 150th issue. All that, and a special celebrity cover artist. 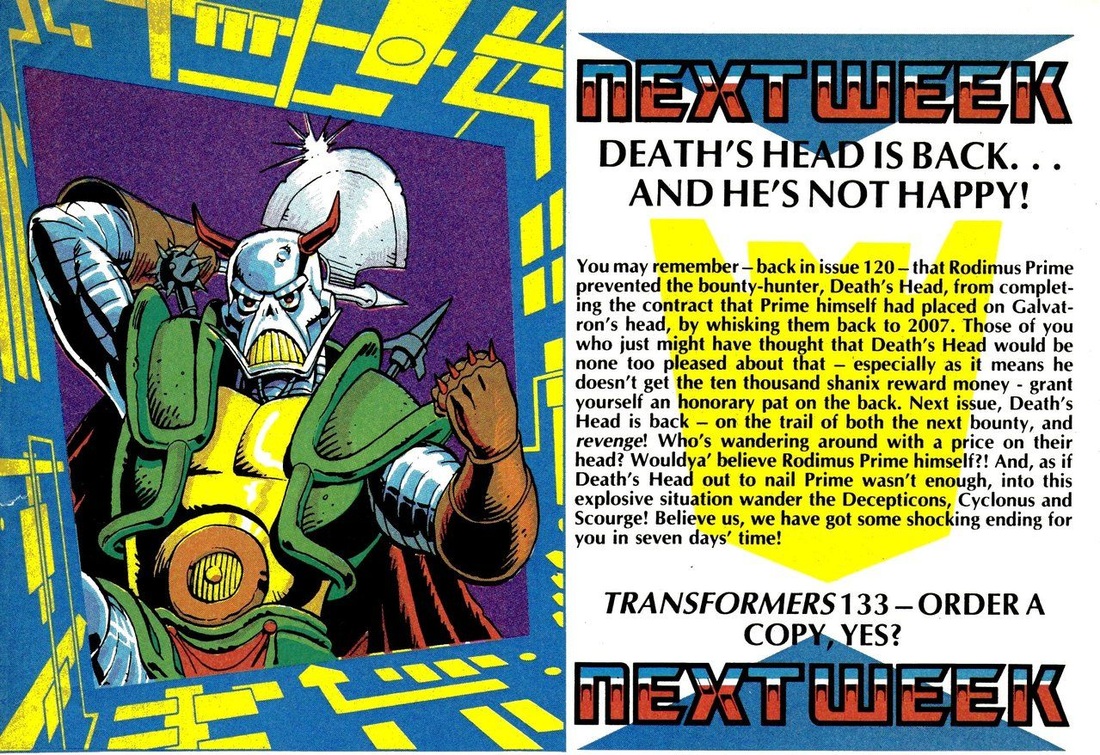