I Can't Live, With or Without You. 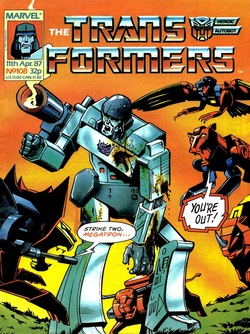 Megatron will go where no one can ever follow him!

We're now into the half of the issue from which most of Prey!, was recycled, though perhaps surprisingly the text alterations stop after the second page as the set up is now out of the way and the stage is set for the robot rematch equivalent of Froch and Groves.

Yes, that was almost topical sports reference, go me. Expect Wayne Rooney gags in a fortnight.

Visually the edits are slightly more obvious this week, especially on the first page, as the person altering the text (presumably Furman) struggles to fit the new dialogue in the predetermined space. Despite the best efforts of the UK team this is where the attempts to fit the two stories together start to falter as we get text boxes introducing each Predacon in such a way that only makes sense if this was their first appearance.

In Florida, Megatron is forced to hang about by himself whilst waiting for Vortex to come and fly him over to their new island base, which is perhaps a bit odd as not only are most of the Earthbound Decepticons incapable of flight at this point but it feels unlikely the currently super paranoid Megs would agree to a headquarters he can't travel back and forth from under his own steam. As I can't imagine Shockwave demeaning himself by acting as mass transportation that means poor old Vortex and Blast Off will be working overtime as air ferries for the immediate future (in theory, as far as the British stories are concerned, Thundercracker is back but he seems to be on holiday).

One of the things I praised Budiansky for last week was how seriously he was taking this important story by avoiding the obvious comedy moments he'd normally indulge in. He mostly maintains this mood in the second half but Uncle Bob clearly can't resist the one gag as a fat human, running from a clam bar, insists on going back to grab just one more because they're just so damn good. It's a moment that doesn't really gel with the rest of the issue but considering the remarkable restraint he's shown thus far in reining in his usual wacky tendencies one moment of weakness is acceptable.

Tantrum has the horn for Megatron.
This is where we get the centrepiece moment of the entire story as the Predacons stalk and fight Megatron. It's some of Bob's best action writing, a tense sequence with some delightfully violent moments as Megatron's face and side are ripped apart.

There's also something interesting in being put so firmly on Megatron's side in the fight, you actually want this despot to win and when he successfully whups their asses and regains his mojo as he realises he's just too damn awesome for anyone to survive his wrath you actually feel pretty good for him.

The problem with this isn't one of Bob's making, but the result of Prey! There's no escaping the fact that the fight is basically identical to the earlier one (even down to Megs losing his fusion cannon), in a way that for anyone reading unaware of the context can't help but seem a dull rehash. Whilst Furman's last romp for the two leaders was overall better that Budiansky's arc removing them, this issue by itself is good enough to make this pre-emptive recycling all the more annoying. Frankly Bob deserved a co-writers credit on the earlier story and the entire when read in context feels even more unprofessional of Furman, however much he is generally on fire (writing wise, not literally,  that would be silly) at the moment.

The attempts to make the two stories feel part of the same Universe also totally fail here, whilst we've been given a reason for Megatron falling into the same trap twice it makes absolutely no sense for the Predacons to repeat the same mistakes as the first time around-most notably underestimating their foe and only forming Predaking too late in the battle to be of use- as they still have their memories. It has the net effect of making Cybertron's greatest hunters seem really stupid. Especially when Shockwave, who also remembers what happened last time, reveals he was guiding their actions through a floppy disc in Razorclaw's head.

Of course, none of that is Bob's fault, and there is one interesting moment at the end of the fight as Shockwave flies over and pretends to offer Megatron help, is the super logical one contriving an excuse to be there to watch for the sake of a secret gloat? 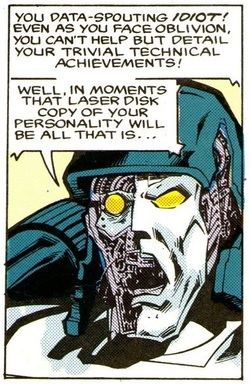 Two-Face.
So the issue looks as if it's going to end with the victorious Megatron giving Shockwave a good spanking, but the twist comes as Shockwave reveals he doesn't fear death as he's backed up his personality on his floppy disc.

And that's when the penny drops for Megatron as he realises that Optimus really did survive their fight. The epic full on mental breakdown is brilliantly done, as he rants and raves and fires his gun all over the place before wandering onto the active space bridge, resulting in a massive explosion. As the new leader Shockwave (and we'll discuss Bob's interesting choice of new leaders in a couple of weeks) points out, he didn't defeat Megatron, the memory of Optimus Prime did.

Sadly this is another moment that somewhat loses its impact thanks to Prey! as British readers already know it's possible to survive being on an exploding space bridge (and of course Straxus did it as well), so Megatron's seeming death doesn't seem as impressively final- there's no "The end... OR IS IT?!?!" style coda as there was with Afterdeath!- as it would have come over as to their American cousins.

However, the blotches in the presentation can't take away from the fact that this is by far the best of the quartet of Budiansky's stories about the change in leaders, a taunt tense tale that shows him at his best since he first returned to Cybertron. It's just a shame the UK comic tries to make him look like a derivative hack on an occasion when it's not justified.

The art also continues the upward swing in Don Perlin's work, his disfigured Megatron is probably the most memorable image he'll create for the comic, and one other artists will revisit in the years to come. Herb Trimple's cover is also of note as the UK team have added some new speech bubbles to try and emphasise that these characters have met before, though it mainly draws your eyes to how badly drawn Rampage is.

Topical film gag ahoy!
Transformation also continues to play the game by reiterating this is the second time the Predacons have hunted Megatron. You do have to wonder at this stage if it wouldn't have just been easier to use one of the other teams in Prey!

It's time for the first reprints of the year as the Decepticon Dam-Busters! Collected Comics and the badly misnamed Complete Works Volume 2 are out now. Surprisingly there's no advert for either book, just a mention in the side bar on the editorial, apparently the dam story is "Highly acclaimed", though who by is undisclosed. We'll talk about these in more depth come the end of 1987, but it is worth noting that Raiders of the Last Ark! becomes the first British story to not manage a reprint.

Blue Streak and Blitzwing get the A-Z treatment whilst Grimlock gets a letter from Alan Jones of my local stomping ground of the West Midlands, pointing out anyone who wants a Swoop toy who has a friend in America should do what he did and get them to send one over. Grimlock suggests this could be done with any of the increasing number of toys not being released in the UK, which is almost a precursor of getting Masterpiece Prowl direct from Japan rather than paying ToysRUs's ridiculous £60 RRP.

Inhumanoids sees our heroes do some research into the monsters as they discover they've been knocking around for centuries. There's also a bonkers moment of one character being attacked by a living forest as he tries to track them down.

Next week, will Ratchet's efforts see Optimus Prime back already?

Property Damage: 3 [Added one truck and one clam bar].

Implied Human Deaths: 2 [Only half of the four people at the clam bar are seen to get away, and the position of the other two suggests they should have been crushed by the falling roof. Other staff may have been in the back] 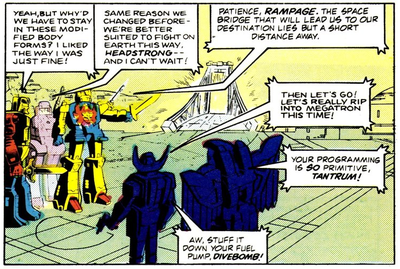 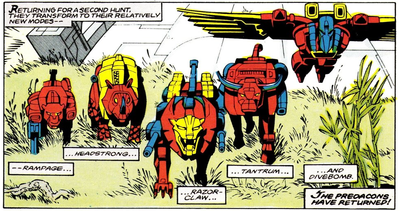 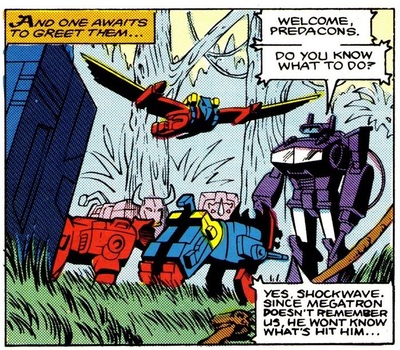 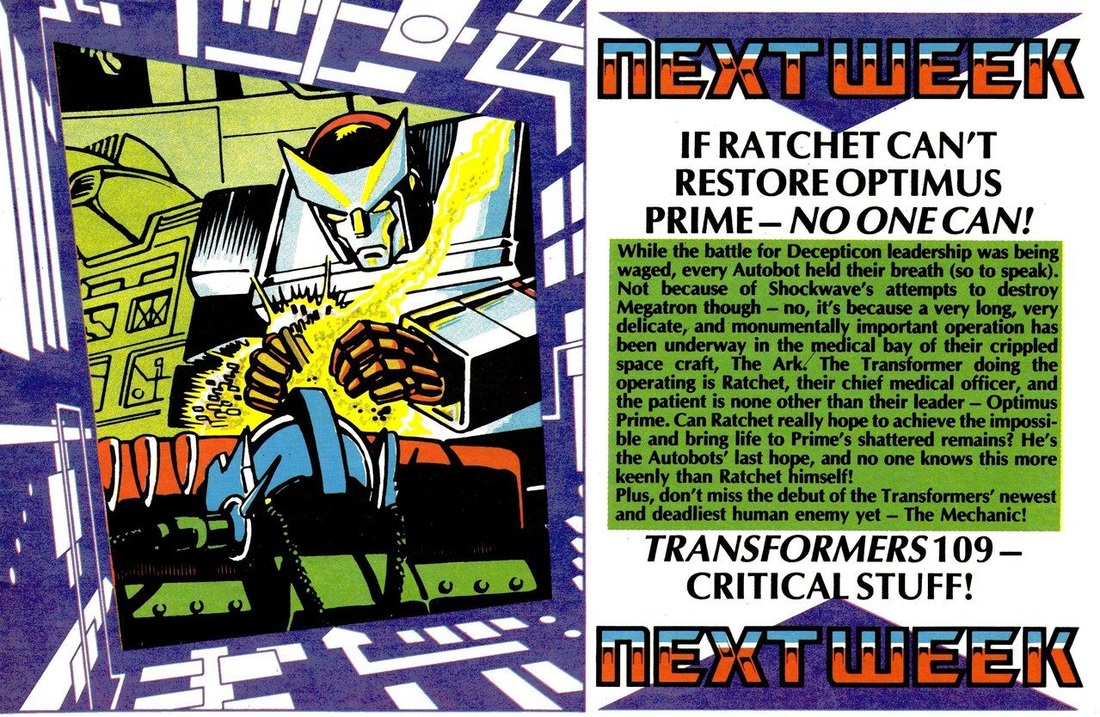