I Can't Get Any Worse, People Say I'm Obsessed. 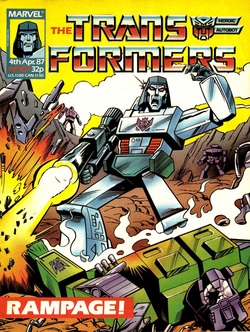 C-commander, do you see? That wasn't Optimus Prime--it was only a truck!

This is the point where the decision Furman made three months ago to borrow elements from Budiansky's forthcoming American stories comes back to bite the book on the ass. This will be the most heavily re-edited of all the American stories as the (presumably newly installed in the role Furman) editor has to jump through all sorts of hoops in order to make things fit.

A few changed panels here and there might not seem like much, but the American reprints are essentially money for old rope, the more they have to be mucked about with beyond localised spelling the more that eats into the books overall budget and therefore profits. The struggle and cost of making this work is likely why the colour British stories will generally try to keep as separate as possible from the American adventures as much as they can from now on.

It doesn't help that the edits aren't just to cover the Prey! discontinuity, a reference to the G.I. Joe crossover (ignored by the UK at this point due to both the Action Force comic being years behind the point where it occurs and the comic itself being crap), a continuity error where Dead End is coloured and named as Drag Strip and some of the text in the last panel in order to make a better cliff-hanger all have to be mucked about with as well.

With all that, and the fact that for British readers this is a rerun, the actual story can be fairly easy to overlook. I was fairly harsh on how Prime was written out (though the comments last week show Afterdeath! does have its fans), how well does Megatron's last story stand up in comparison?

It helps that unlike Optimus, Uncle Bob has actually taken the time to set up Megatron's mental issues, his last couple of issues firmly establishing the Decepticon leader is fully loco and his troops are scared of him. The cause of his final descent into complete instability here also works really well, the idea he has become so used to Optimus as a part of his life he can't cope with him being dead is a smart one brilliantly played to the hilt.

Things open-after a pointless page of a Walter Barnett led army team approaching the coal mine-with a bit of scene setting exposition as Shockwave sends a message to Cybertron explaining about how the Decepticons are moving to the Florida Keys to take advantage of the ocean for generating power (he also has some guff about the Hydrothermocline, but with the reference to Cobra removed this has no bearing on anything).

Eeek.
It's our first glimpse of Megatron, sitting on his throne of smashed cars, that really shows how Bob is going to handle this differently, and in my opinion, better than was the case with Afterdeath!.

The most important difference is this is actually a story about Megatron. Optimus was an almost incidental character in the bulk of the previous story, present and doing the leadery things but it is fairly easy to imagine a situation where Budiansky had just been ordered to kill him off and had little choice but to stick it on the end of that month's "Throw the Transformers into something from pop culture for wacky hijinks to ensue" story without having much chance to make the departing character front and centre.

Conversely though, Megatron's state of mind drives Gone But Not Forgotten!, his frustration at not having killed Prime personally and his rising paranoia that his old foe might still be alive push the story forward, give him lots of great scenes and motivates the actions of all the other characters. It's exactly how the last story of one of the major leads of a series should be handled.

The second advantage is how seriously this is played. There's no light comedy here despite several moments (such as Megatron- in a scene coincidentally very like that of a Masterforce episode from a year later- blowing up a random red truck that just looks a bit like Prime) that could be played fully for laughs there's a very dark tone throughout.

Previously Megatron's increasing madness and tendency to whack his own troops has been portrayed in a comedic style, here it's genuinely terrifying and makes this the bleakest and most serious story Budiansky has produced since The Smelting Pool! the best part of a year ago.

This all comes together perfectly in the best scene of the issue as Brawl tries to cheer up the moody Megatron by pointing out they all saw Prime die. To which Megatron's response is to grab him by the head and crush it, slowly and viciously, whilst giving one of Marvel Meg's best ever speeches. "Did you wrap your hands around his neck and feel its smooth steel skin? Did you squeeze and feel its infrastructure begin to buckle under the pressure? Did you keep squeezing until there was no longer any reason to squeeze? DID YOU?! WELL, NEITHER DID I!!"

What's especially bleak about it is that Brawl, a character only properly introduced two weeks ago and only in his second appearance as far as American readers are concerned, is to all intents and purposes killed here. He won't show up again for a while, just long enough into the year for it to be likely Bob just forgot what had been done to him here. Whilst that's likely another sign of the author's disdain for the Special Teams, it also really adds to the dark tone of the issue and is arguably the most memorable moment for any Combaticon in the whole of Marvel.

It might be worth mentioning at this point that the true mark of a real Transformers fan is they not only never get Brawl and Brawn mixed up, but that they never even notice how easy it would be to get the two names mixed up. 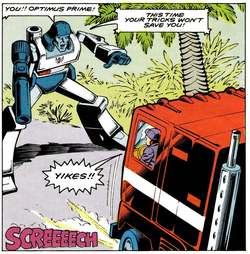 Ginrai was not expecting this.
That does mean the issue peaks before the end, but whilst not as gripping the drive down to the Keys still has a tension to it- tellingly the driver of the above mentioned Prime style truck doesn’t get in the customary “The insurance company is never going to believe this!” quip because this isn’t remotely that sort of story. The sequence of Shockwave playing Iago to Megatron’s Othello by putting the idea that Optimus might really still be alive in his head is rather brilliant as well, especially with the reader being aware of the irony in Shockwave’s choice of lie.

It’s only really the Predacon summoning part of Shockwave’s plotting that feels a bit flat, but that is of course due to it having been recycled into Prey!. Despite that, the edits are at least well done, and if you were unaware of the real order the stories were written in you’d be convinced this was how it had been all along. This sequence also ends with Shockwave flying away on the Hydrothermocline like he’s escaped from Doctor Strangelove, which is a pretty damn awesome visual.

The two moments in the issue that don’t really work are both fairly inconsequential- The first is the army business that doesn’t really do anything or go anywhere and only seems to serve to give Walter Barnett a cameo.

The second is the page that flashes back to the events of last issue, which is written in a rather clumsy way that sees it start off as showing Megatron remembering what happened, before a forced switch to omnipresence so that the scene of Ethan saving Prime’s floppy can be included.

Other than that, this is top draw Budiansky with some lovely Don Perlin art (it’s a small moment, but the poses the Combaticons are striking when Shockwave barges in on Megatron are lovely), even the cover is fantastic this week.

Though it’s something that gets a little lost amidst all the changes the book is undergoing, this issue also sees the Decepticons leave the coal mine base they’ve occupied for the last year. It’s off to the Florida Keys now, a location literary types may associate with Ernest Hemingway but which just makes me think of Licence to Kill. 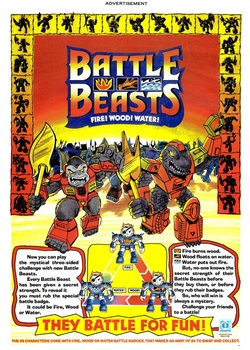 Who on Earth battles for fun?
Nicely Transformation emphasises that Megatron is even more unstable than usual thanks to what Lord Straxus did to him, a nice way of solidifying the links between the British and American stories even as the need for editing makes them creak at the seams a bit.

The third and final Captain Rik is also somewhere in the issue, but once again I can’t find him. This sadly means I will never be able to claim my felt tips.

For those who’ve been laying awake at night wondering, Grimlock reveals he regards his “Birthday” (as Transformers don’t really have them, I wish someone had told Daniel that before the TV episode Surprise Party) as the date he took over the letters page, 23rd August 1986. He also assures kids that all letters get read even if they don’t get printed, which is surprisingly nice of him considering the direction his personality is about to go over in the comic.

Inhumanoids enters the reprint of its second issue, and oddly the recap at the start reveals that eye patch wearing villain and ripped clothes in a sexy way scientist woman are in fact related, which I don’t recall the first instalment actually spelling out.

Next week, it’s Megatron chased by Predacons onto an unstable space bridge. What a great idea for a story.

Before we go, all the altered panels: 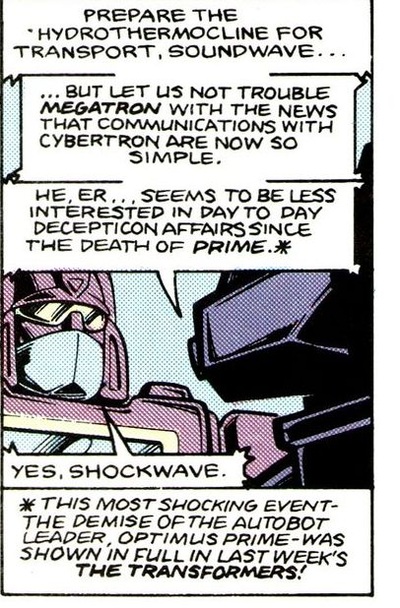 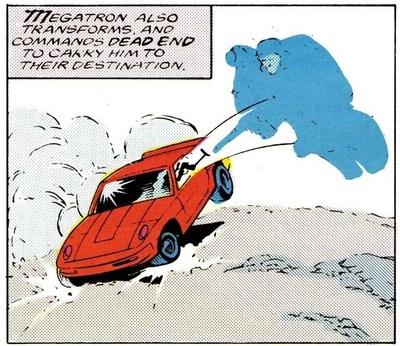 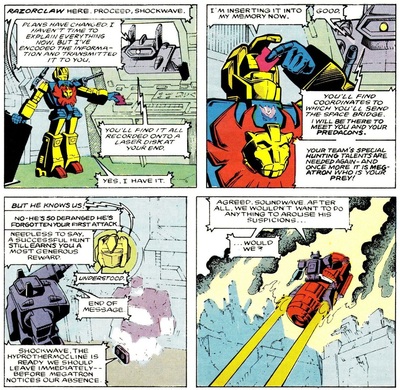 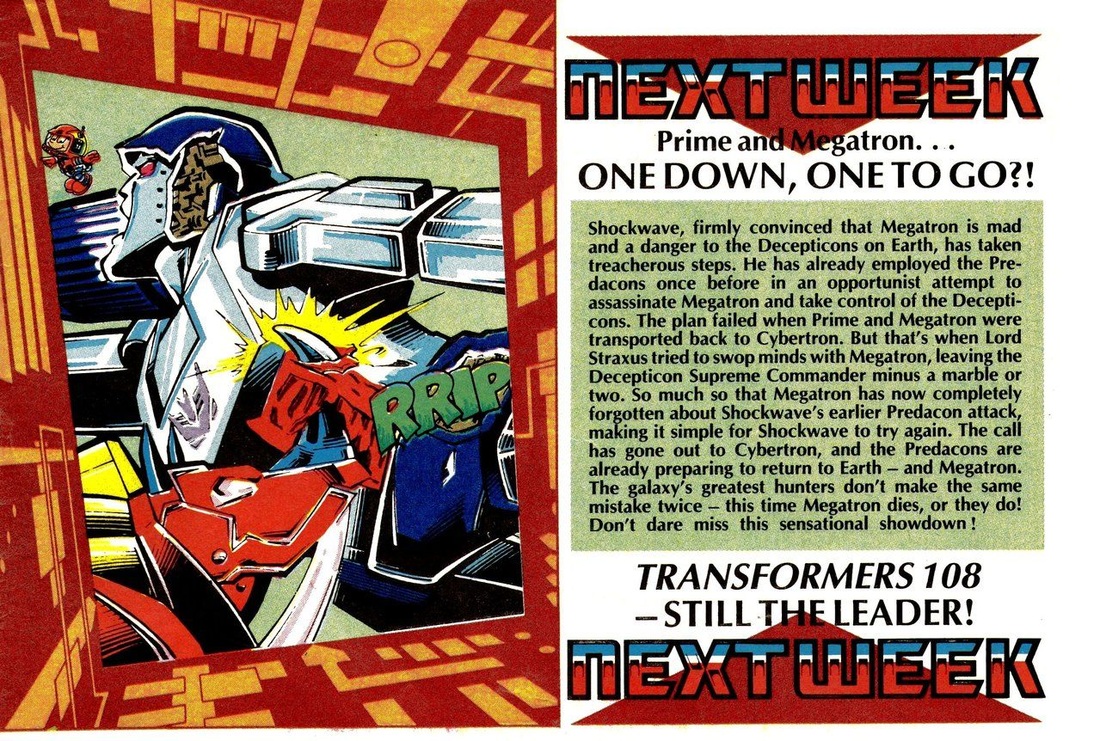