I'm Half the Man I Used to Be. 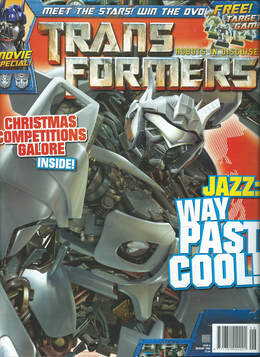 
‘Cause I figure, why should they look so nice, when I look like this!


So do you want one Transformation this week? No? You want two? Well, today is your lucky day as I hit the final issue of the film comic’s first year, and with it, its attendant annual.

Now, I know this is going to be a divisive issue, especially for reader President of the Rose Tico Fan Club (as you can tell from their twitter handle, their favourite character of all time is Bumblebee. I can literally name all my readers at this point. Hi Charles!), who have felt their legs cut out from under them every time I’ve made a Jazz joke.

But I’m nothing if not someone who doubles down on a joke, so expect a lot more as I look at the focus story on the one Transformer to be both a top and a bottom. 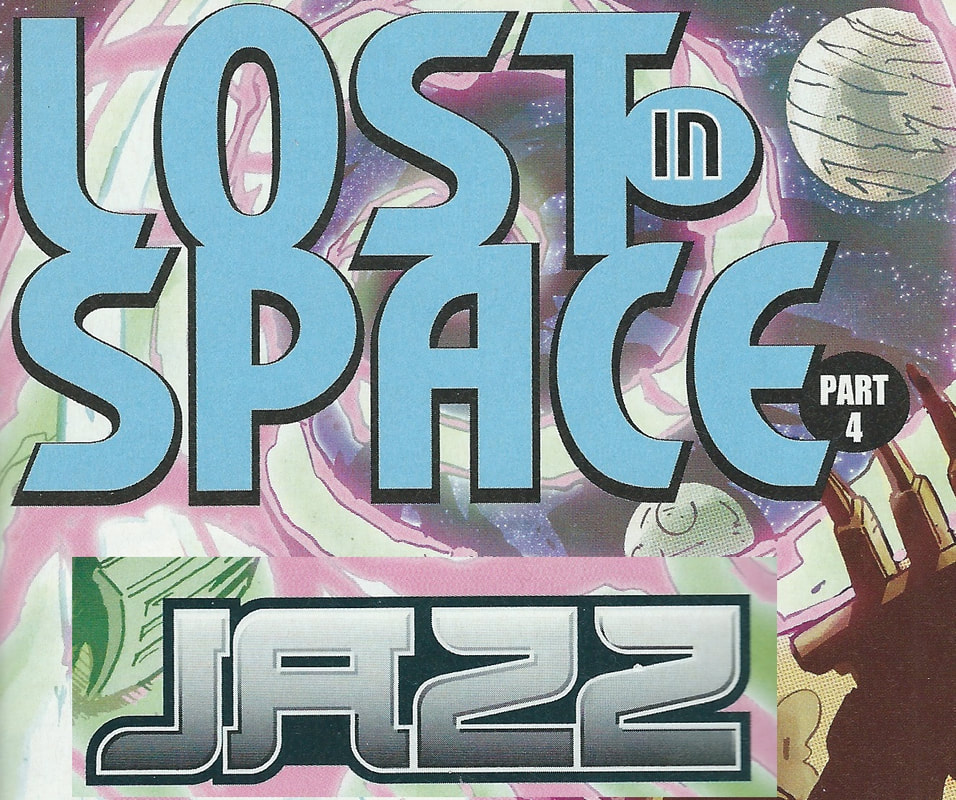 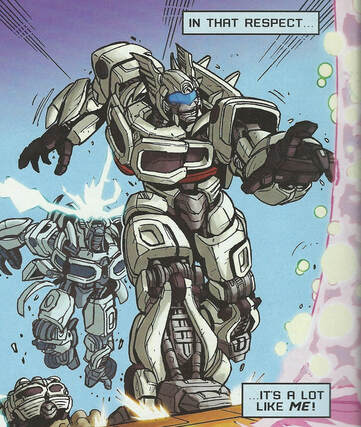 Jesus Jazz, what happened to your face?
Unfortunately the jokes are perhaps the most interesting thing about the conclusion to Lost in Space, which is no less than the third story in a row (meaning all but one in this arc) in which weird alien technology gets inside the head of the titular Transformer, dregs up their memories and uses them against them. In retrospect, it’s rather a shame Devastator didn’t run last, as at least that’s the most subversive of the three.

So Jazz has decided to ignore Ratchet’s message and is bumming around on a planet that’s like a living information super-highway. But it turns out it gets all its information by draining passing tourists of their memories, leaving him trapped and about to become a husk before his own distress signal brings Ratchet and Ironhide to his aid.

What is interesting here is that, for once, we have a good excuse for Jazz not talking like the character from the film. That was explicitly a faux persona he adopted after absorbing the local internet, so this, it has to be said fairly stock Furman serious and overly wordy take, is actually the “Real” Jazz rather than the what’s up bitches version.

Indeed, you might say he has a split personality.

In character he’s rather like Furman’s version of Sunstreaker from the Marvel comic as, in flashback, we see a wounded Jazz being dragged along by another Energon repaint, Clocker as they flee from Bonecrusher. 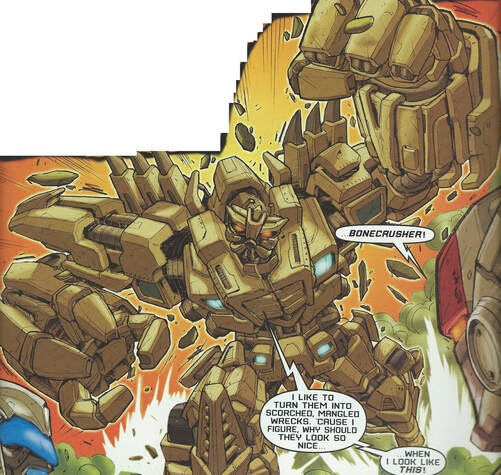 And whilst I’ve been proven almost immediately wrong when I said we’d seen the last of Bonecrusher two issues ago, he’s great here, wanting to smash up anyone prettier than him as he has severe self-esteem issues over how ugly he is. Poor guy.


It turns out Jazz is so badly injured because he’s foolishly “Externalized his spark core forcefield”, to protect his shiny lovely bodywork. A vanity move that gets Clocker killed as he has to try, and fail, to fend off Bonecrusher so the wounded Jazz can limp off and escape.

As with Sunstreaker, this is pretty dark for a kid’s comic designed to sell a current toy (about the only conceit to younger readers is Clocker is dismembered off-page), and helps this one aspect feel fresher and more interesting than the rest of the story.

Though Ironhide getting to attack an entire planet when he shows up is pretty much peak for the character.

The issue ends on what feels like a definitive note as everyone gets to go home to Cybertron, adding to the sense that this comic was originally commissioned to run six issues and the extension from next month is something that wasn’t really expected when this started.

On art, Marcelo Matere, one of the more unsung members of the contemporary IDW crew, does a nice solid job, even if his Baybot faces look terrifying at times. But that, and some interesting bits of character work, isn’t enough to salvage an issue that feels like the author has run out of interest in the book.

Amazingly, after a couple of water treading issues as a rethink goes on behind the scenes, the title is going to undergo a rather spectacular reinvention in the new year. 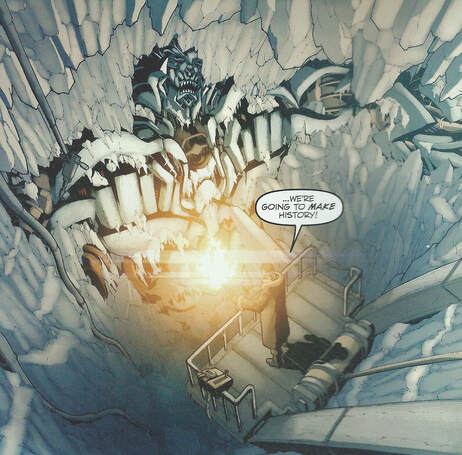 Megatron on ice.
The sixth part of the Movie Prequel closes out the second of the original issues with nothing but laborious and over extended glimpses of moments the film successfully and succulently covered in about five lines of dialogue.

So Megatron is dug up, the Allspark is found and the Hubble telescope (suggesting the inclusion of the ripped from today’s headlines Beagle 2 was a late addition to the film, perhaps explaining why it’s called a NASA mission rather than an ESA one) provides picture of “Relatives” of the Mega-Man on Mars.

It’s an unengaging box ticking series of events that shows many of the flaws the IDW movie books will have going forward. The best part, and it’s completely tonally out of place, is a bald NASA technician having a massive afro in his ID photo.

I think the big problem is that this story has become focused on some of the film's McGuffins. Of which it probably has too many. The Allspark, Megatron (at least till he wakes up and becomes a character) and (to a lesser extent) the glasses. Which is a very fannish thing, to want to fill in and explain every gap. It even in theory works with the idea of showing not telling.

But Hitchcock, who coined the term, wisely pointed out that treating the McGuffin as anything other than a plot device is a severe mistake. What the secret plans actually do is irrelevant, you just quickly establish why it matters to the characters and use them to set them off on the chase. You don't bog yourself down in it because most of them do not stand up to the sort of close scrutiny this comic is giving them. 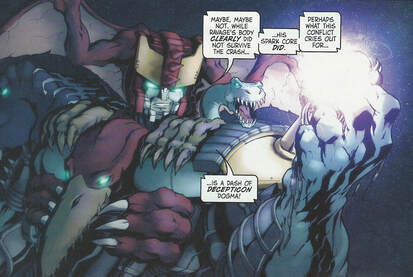 Ravage truly has 9 lives.
Beast Wars also concludes its original second part, reaching a pause in the action as the Maximals manage to fend off Magmatron and get the part they need, only to realise its broken. Luckily all the spare parts to fix it they need are over on the Ark, meaning some characters from Beast Wars might be about to appear in this Beast Wars comic.

We end though on a moment that, like the prequel comic, signposts some of the problems the book is about to have, though it’s not immediately apparent. Megatron has found that Ravage’s spark has survived the explosion in The Agenda and plans to revive him.

Which is fine on the surface, Ravage had a decent sized guest role in the cartoon and had another toy that could be included. But the desire to focus on a G1 guy over the main characters of the series this is spun-off from is where lots of issues are going to spring from. 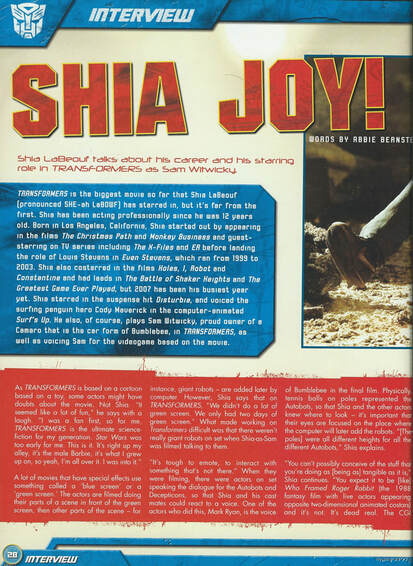 First page of the Shia interview.
This issue is not just a Christmas one, but also a “Movie special” thanks to the release of the DVD. Though the contents page (Jazz Clubbed this month. Imagine making puns out of Jazz) suggests the editor isn’t completely up on either the film or the comic he’s editing as it describes the lead strip as showing how Jazz came to Earth. Which it doesn’t, as that was seen in the major motion picture Transformers (2007).

Character Profile covers Starscream, and just talks about the G1 version rather than the loyal tough bruiser from the actual film.

Cybershop Until You Drop! promotes the new (and now long defunct) Transformers online store, giving you the chance to win a £20voucher if you know if Blackout was an Autobot or Decepticon.

The big thing that makes it a Movie Special is two interviews over five pages with Shia LaBeouf (Shia Joy!) and Megan Fox (Megan-Tron!). These are likely just transcriptions from one of the press junkets from the film—it’s only halfway through the Fox interview that you realise they were actually together rather than being spoken to one on one—but it’s a solid quick bit of insight for kids. Even if it does talk down to them a little (did you know “Sick” is slang for “Awesome”?).

There is something of an insight into attitudes towards the two leads though, LaBeouf is called an amazing new actor and is heavily praised, whilst Fox is super hot and gets to talk about how great LaBeouf is. She also tells a more family friendly version of the infamous “Michael Bay had me wash his car in a bikini” audition story by saying she was asked to “Fix” his Ferrari.

She’s also glorious honest about whether or not she’ll be back for Transformers 2: She likes to work and is contractually obliged to do it anyway. 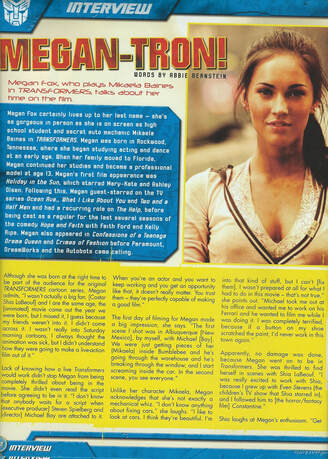 Foxy.
Top Gear looks at and has competitions for the Transformers watch, Cyberstomping Bumblebee and some pillows, plus an overview on IDW’s The Best of Don Figueroa.

The notable thing though is the competition for The Best of Simon Furman asks you to name the Bounty Hunter he created, with Rick Deckard and Durham Red as the other two options. Whilst the book has always had an older audience on top of the target demographic, this is the first time a competition has a question kids (or indeed anyone who doesn’t remember a failed twenty year old British comic) have no chance at getting without a guess.

The irony is, that Mech Mail gives the strongest showing for the kids yet, with lots of enthusiasm and drawings of their own original creations. Though it’s older fan Gary Miscandlon who gets to go all Paxman as he asks how readers in issue one had managed to see the film before release. Which gets a “How indeed?” style response.

I hope no one who pirated the film got into legal trouble, or else like Jazz they could be left feeling all cut up.

2007 was arguably the biggest ever year for the franchise to date. Indeed, looking back, the sheer amount of tie-in merchandise seems insane compared to even the last couple of films. Today you’re lucky if half the on-screen characters get a toy, the idea that random normal vehicles in the film would be turned into Transformers and a gut of repaints of older toys would be pressed into service to meet demand seems to be from another world.

Add in books, comics, pillows and potato heads and we end the year in a much healthier place than seemed the case back in January when people were expecting an embarrassing flop.

Of course, that leaves us with one key bit of British merchandise to cover, the Annual! 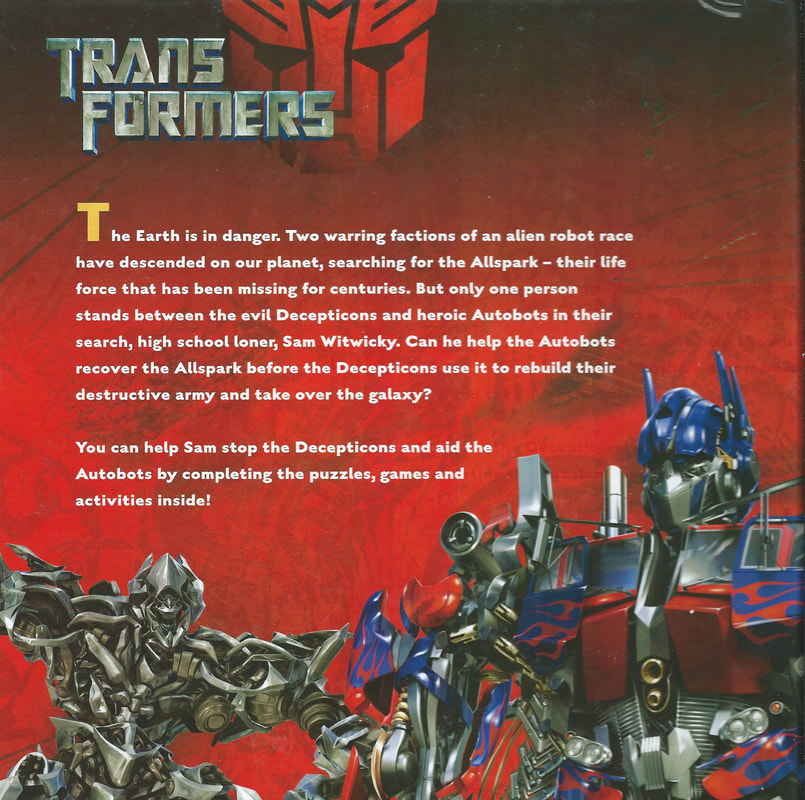