Don't Give Us None of Your Aggravation. 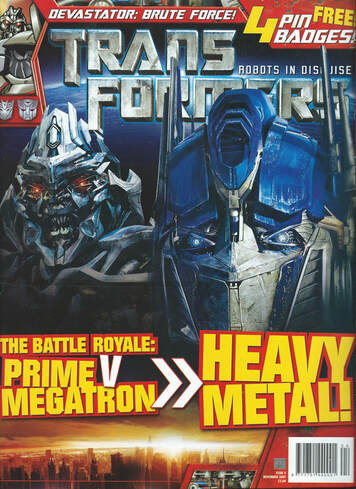 
You needed subtitles for the hard of thinking.


If I felt a little sorry for Ratchet being left off the main cover last issue, things are even worse for Devastator (who, you may remember, is not the character called Devastator on-screen in the 2007 film but an entirely different guy as that was Brawl) here. The cover itself is just a cropping of the film poster given away with this issue that makes the Smackdown feature on Prime and Megatron look the main selling point.

Devastator doesn’t even get to be in the corner box that has “DEVASTATOR: BRUTE FORCE!” written next to it, instead we get a picture of Starscream. Oddly the preview of the cover on the NEXT page of #3 did use a Devastator, Roche art from issue 2 to be exact. Clearly someone thought that the final version should use art from the actual comic and got confused by the character model, again, being completely different.

To really run salt into the wound, Devastator doesn’t even get the character profile this month, it instead going to Blackout, who I don’t believe will ever even appear in the comic. 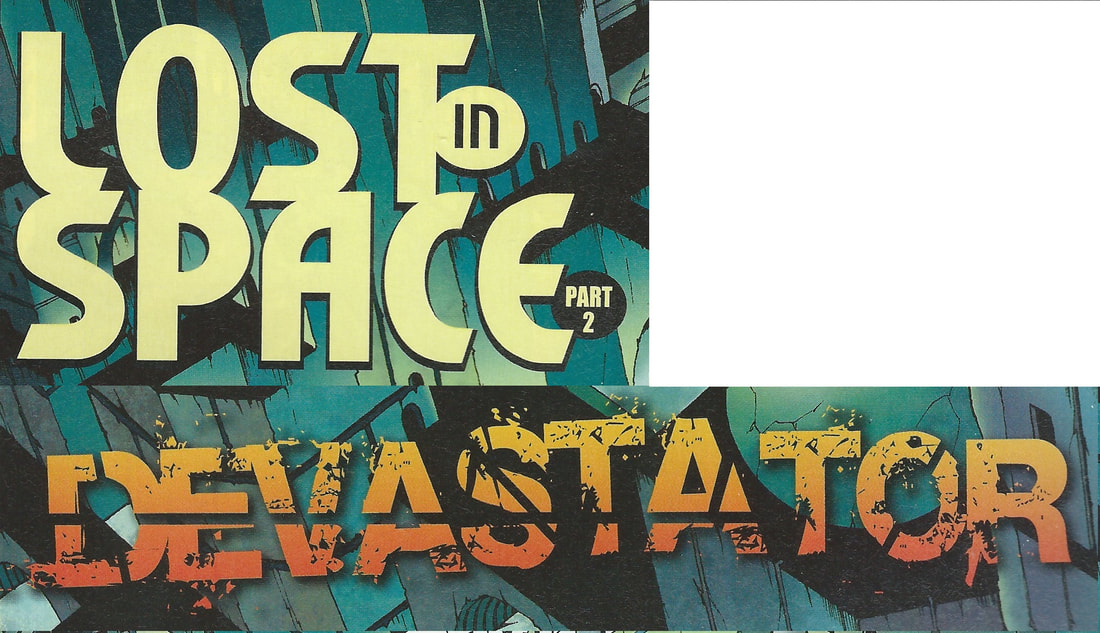 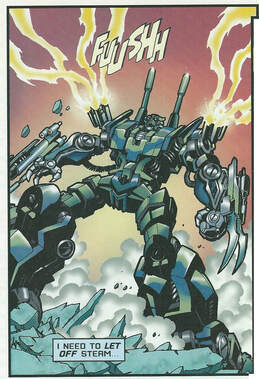 He's had a respray since issue 2.
All of which makes it sound like the second part of Lost in Space (one thing I didn’t mention last week was that the contents page is still just calling the lead strip a prequel, suggesting the decision to sell it as a proper multi-parter was late in the day) sound like another bit of slightly reluctant filler. Which it is to an extent, but there’s a nice twist in here.

The plot is the single most basic Furman idea imaginable, being effectively the third recycling of Distant Thunder!, with a little bit of Ghosts from issue zero of Generation 2. But there’s a very smart twist to the story.

Devastator has been teleported to a devastated (ha) city on an abandoned planet, where he feels an overwhelming urge to devastate it some more. He is then beset by a big giant head warning him to leave as “The Flame” will turn him to violence as it did the population, before he’s confronted by Starscream, Barricade and Bonecrusher, all of whom mock and belittle him whilst he has no idea if they’re real or not.

So far, so familiar. With the even the youngest reader being likely to expect that the solution will be for the lead to overcome their baser instincts and not give into violence. 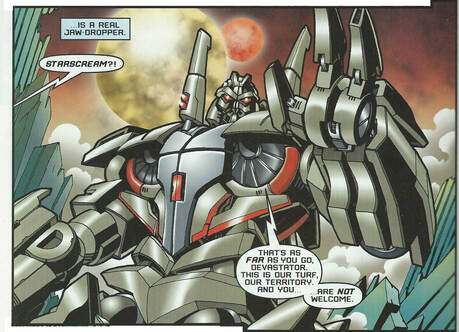 It’s a fun gag, and adds some new spice to an old meal. It also tells us a lot about Devastator as a character, meaning it feels more relevant than the Ratchet story did as there will never be a chance to revisit this Decepticon in stories after the film.

Some nice art also helps. Don Figueroa was at the peak of his adoration here, just before his first disastrous attempt to leave Transformers forever, as shown by the fact he draws the entire issue. And the art is sharp, clear and fun, with Starscream especially deserving the caption of “Jaw-dropping”. The only let down comes right at the end, where what is presumably supposed to be Devastator turning into his spaceship protoform mode instead looks like he’s blasting his head off into space.

Ultimately, perhaps still not the greatest issue, but a big step up from the last one and probably the most fun of this arc. 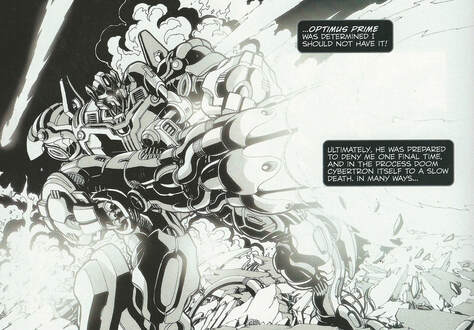 Bringing out the big guns.
The fourth part of the Movie Prequel is the opening of the second original issue, and it rather shows how slight the plot is as the only thing that happens is that Megatron flies to Earth after the Allspark and lands even after the ionosphere blinds his sensors, on uncertain icy ground.

In the Marvel days of course, many an issue would struggle with the need to recap things for readers who may have missed last week/month. But the environment had changed by this point, readers of a comic can now reasonably be expected to still have the previous issue to hand rather than having chucked it out. So this is just incredibly extensive padding that could have just been cut down to two pages easily. Only some more nice black and white flashback art stops it being a complete waste of time. 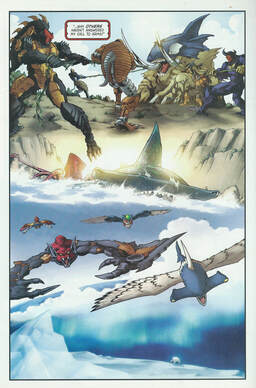 All your favourite characters that won't do much in the book.
The opening of the second Beast Wars instalment also recaps the plot, but does it at a faster rate of speed and more naturally as all the new Maximals need bringing up to speed from Razorbeast.

Magmatron also gives a big speech to the new troops that did manage to become Predacons, which basically shows he’s just Beast Wars Megatron if he said “Yes” a lot less. This is probably a mistake, if you’re providing a substitute for one of the most beloved villains in the series, just going for a straight substitution can only feel unsatisfying.

Both speeches basically boil down to the same thing: Ravage’s ship from the end of season 2 will have a means for Razorbeast to call home amidst its wreckage (apparently none of the regular Beast Warriors thought of this) and it becomes a race between the two sides: Maximals to grab the transmitter and the Predacons to destroy it. With the good guys badly outnumbered as most of them haven’t answered the call due to getting into fights with different groups of Predacons.

It’s basically a perfunctory opening, but feels it has about ten times the plot and incident of the other reprint. 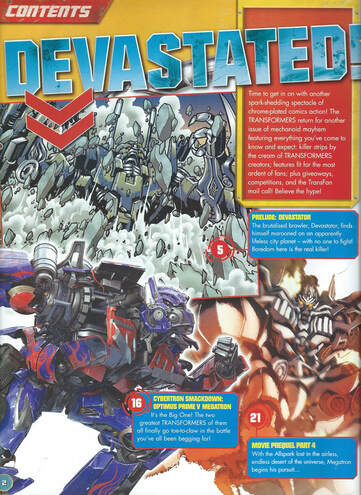 An example of the contents page.
The contents page, titles Devastated! this time, calls Devastator the “Brutalised brawler”, though of course he shouldn’t be confused with the brutalised Brawl.

The Autobot Vs Decepticon Smackdown earns its prominence on the cover by being extended to four pages, and by covering Prime and Megatron it gives us a fight we’ve actually seen in the film. Apparently Megatron’s one weakness is battle is he’s slightly less awesome than he thinks he is. But still very awesome. Did Becka write this?

The poster is a little different this month, being the one sheet poster for the film, meaning Sam, Mikaela and Lennox appear in the comic for the first time. Which shows the difference in priorities between the source and its spin-off.

Blackout’s incongruous profile doesn’t mention Scorponok, but does claim he has multiple expandable drones he calls “The Swarm”. If this includes old crabby, that neatly covers the later issue of this comic that kills him before his return in Revenge of the Fallen.

Top Gear covers Barricade, Ratchet, The Ultimate Guide (no competition for this one, presumably because it has been a prize already) and the single greatest tie-in to the films in the entire history of the franchise: Optimash Prime. What a legend.

A new feature begins with How to Draw...Optimus Prime. Written by Steve Marchant and drawn by 2000AD legend John McRea and Lee Bradley. It’s a nice idea, but the famously difficult to grasp nature of the CGI models means it basically boils down to “Draw a vague shape... then add loads of detail” that I doubt would be of any practical use to a child trying to join in. Cool Photoshop of Prime holding a giant pencil though. 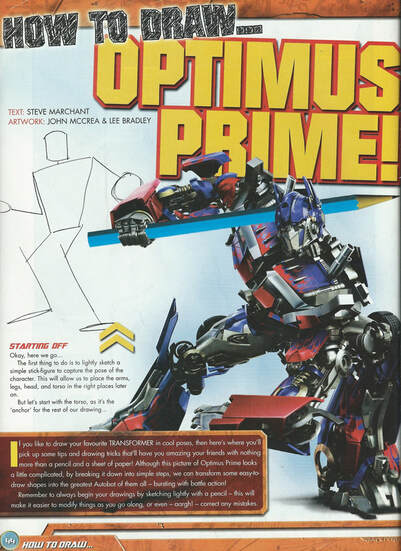 Imagine getting from that stick man to the image on the right with a pencil.
Mech Mail is only two pages this month, presumably to make room for the extension to the Smackdown, but the gauntlet is thrown down by old Marvel fan Jon Miller, who suggests the letters be answered by a Transformer. Readers are asked to write in with their suggestions, though they are limited to 07 characters.

The art oddities we’ve had over the last few issues continues as a familiar name to modern fandom appears with a nice drawing of G1 Mirage, Ben Pirrie. The TFNation veteran—who is, roughly speaking, a contemporary of mine and would have been no younger than his mid-twenties at this point—is described as a 9 year old. Ben didn’t actually put his age alongside his letter and, when I asked him about it, was a little put out by the assumption based on his art. However, I think they’ve just accidentally copied the formatting from the adjacent art of Devastator (though labelled “Barricade” by the child, will this confusion never end?) from Sidney Cavell, age 9.

Though do feel sorry for another familiar name, Ralph Burns, whom the comic entirely believes is an “Old” man of 29 with his letter.

The most dangerous musing however comes from Stephen Parry, who suggests doing crossovers with things like G.I. Joe. No, Stephen, no!

Next week, Ironhide makes first contact. With his fists. 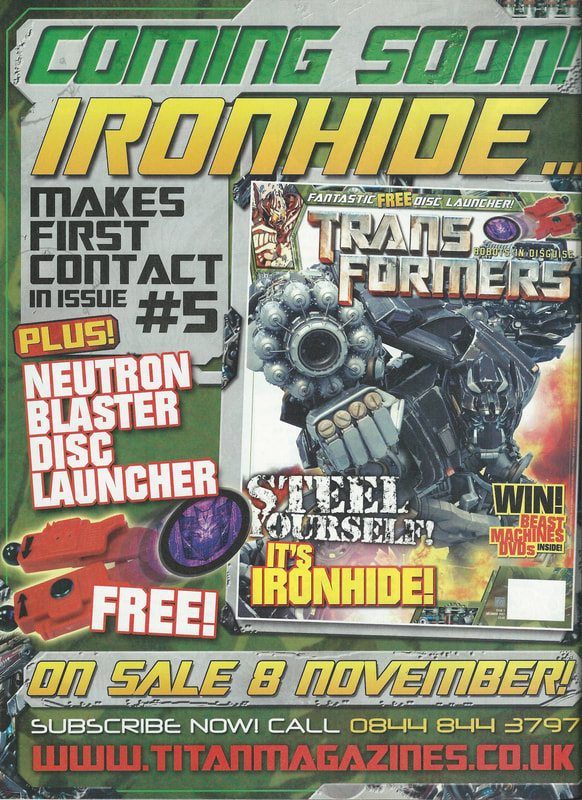