Look Who's Back, Back Again. 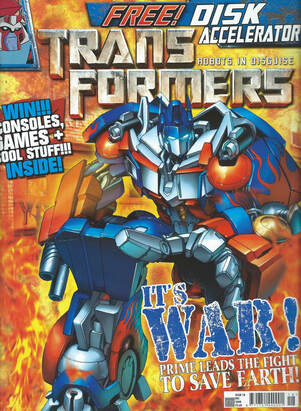 
If that means “I think you’ve taken leave of your senses, Prime”, then that’s an affirmative.


First up, a couple of quick corrections to last week, though I think I caught every instance and corrected it, the amazing new Autobot was called Afterburn, not Afterburner. Also, Animated did not end on a cliff-hanger, it was just wrapped up very quickly.

Over in the other continuity, the cover this month is clearly a last second job, as the “Next” page last issue used a stock CGI Prime (as does the poster). Which, though it’s nice and chunky, you can tell as it’s about as generic a drawing of film Prime as possible. 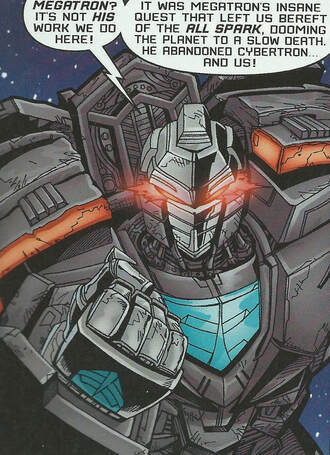 Like his brother Stockholm, this guy grows on you.
Generic certainly isn’t what you can call Return to Cybertron though. We open on a nice comedy scene of Ironhide being desperate to punch Stockade again, despite the nucleon advantage making this a very stupid idea.

Stockade himself, though perfectly happy to deliver a two fist punch to shut Ironhide up, is wonderfully different for a Transformers villain in that he doesn’t actually want to kill anyone. As he explains, he has nothing but contempt for the Megatron approach and only intends to help the scattered Decepticons regroup and bring life back to Cybertron. He’s like a sincere Sentinel Prime.

Said Decepticons include a bright yellow repaint of Cybertron Thundercracker who was naturally called Sunstorm...

Err... Divebomb. Don’t know how Sunstorm let that one slip through.

It turns out that he and the other Decepticons have used their sparks to send a signal that has drawn “The Entity” to Cybertron, something that would only happen to a thing directly connected to the Allspark. So Stockade is going to open up the planet (using the sort of levers you change railway tracks with), let the mysterious thing merge with Cybertron and revitalise the planet.

What can possibly go wrong? 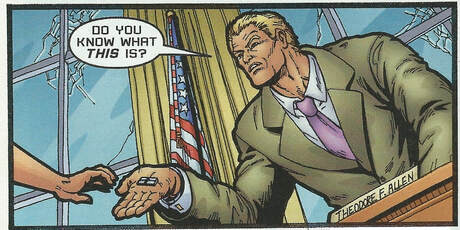 Jesus *Checks nameplate* Theodore F Allen, who hurt you?
Back on Earth, more random volcanoes are erupting and the one and only team leader Camshaft is perfectly prepared to give Prime the shaft as he takes him apart for thinking nucleon is the solution. It’s actually impressive to see someone have no time for Optimus in such a blunt way.

On Cybertron, the captive Autobots decide a distraction is needed, so Ironhide, figuring he can’t outfight the Decepticons but he can outrun them, barges down Sunstorm...err...Divebomb and a chase ensues as Bumblebee sneaks around the back and tries to decide how to stop them.

In the Oval Office we get what should be a fairly straightforward scene of President Allen calling in Mikaela to his office, revealing he’s a baddy and preparing to put a control chip on her.

The problem comes from Dan Khanna’s art. His robots are chunky but fine, but he is one of the long list of Transformers artists who cannot manage humans. Everyone is ripped to hell and looks like John Cena. So, unrealistic for a human. I don’t believe the real US President has a nameplate on his desk, but Allen desperately needed one because you’d never recognise the steroid fuelled terrifying inhuman sight here.

Khanna is also another artist who only remembers two things about Megan Fox. 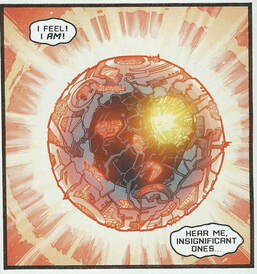 Me, talking to you.
But that’s small potatoes compared to the ending, where the energy enters Cybertron and the planet comes alive with a voice declaring itself... Unicron!

The Decepticons “Oh shit” faces are glorious as well.

There’s a lot going on here as the story juggles three plots, and the pacing and exposition are all handled extremely well. Stockade continues to be fantastic, and the fact Furman is pre-empting so many future bits of Transformers lore means he feels more like he has his finger of the pulse than in any of his IDW stuff. Dodgy art on the humans aside, this continues to be a strong story. 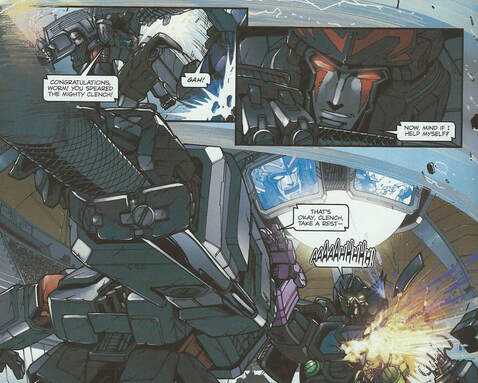 Not a killer.
Megatron Origin is effectively concerned with a series of gladiatorial combats that culminates in Megatron killing Clench, his original team leader.

The plot is furthered in a cutaway to Senator Ratbat, a conniving double dealing politician (who, amongst other things, is pushing for a “No deal” on a particular vote), who sees the tape of the fights and decides there’s money to be made.

More excitingly though, we have a UK edit to the American material, for the first time in ages! The opening page shows a crowd cheering Megatron, with various “Hooray!” and “Yaaa!” captions. These looked so cheesy that I wondered if Titan had added them to give some extra context to what is now a cold open.

So I got the original (or at least the Hachette version) out, and it turns out the cheers were not only there, but Titan have actually removed some. In particular cries of “Killer!” and “Kick ass!”. Presumably because the younger market this comic is theoretically aimed at should not be exposed to mild swearing and the idea Megatron might be a killer.

In an issue that ends with him skewering Clench. 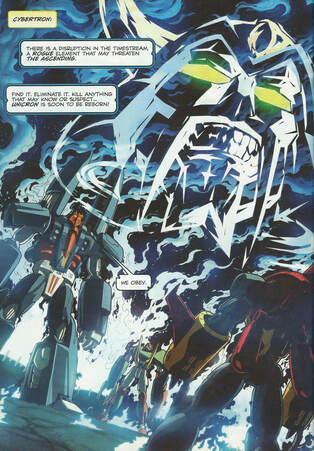 Hey, that guy...
Beast Wars reveals Unicron... for the second time as a gaseous energy form. Though here he can make the shape of his head. He want the angolmois collected and also sends Rartorta to go to Earth and sort out the time shenanigans.

Which is the only real plot advancement this month, the rest being given over to the continuing big fight between the Earth based Beast Warriors. Though we end on the left alone Ravage waking up and looking sneaky.

he sure loves dinosaurs.
The free gift is another disc shooter, and Team Titan! is back in print, possibly because the Team Titan Talks! is entirely devoted to editor Steve White and his love of dinosaurs and robots.

And suckling on udders that produce chocolate milk apparently.

With all that, Top Gear is only a page, but it has a competition for some Animated voyager toys. With a cute question about the Autobots human ally that has Sari’s voice actress Tara Strong as an option. 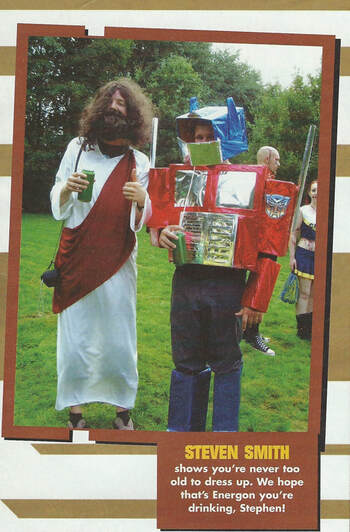 Your own personal Jesus.
Star Screams is especially bloodthirsty this month, with lots of people demanding more violence in the sequel. Standout though is Matthew Collins, age 10, asks Starscream to make his mother into a coffee table for making him tidy his room. Which even Starscream is taken aback by.

Luckily we have the ultimate man of peace present as Steven Smith sends in a picture of himself in Optimus Prime fancy dress standing next to... Jesus.

Next week, back to Animated! 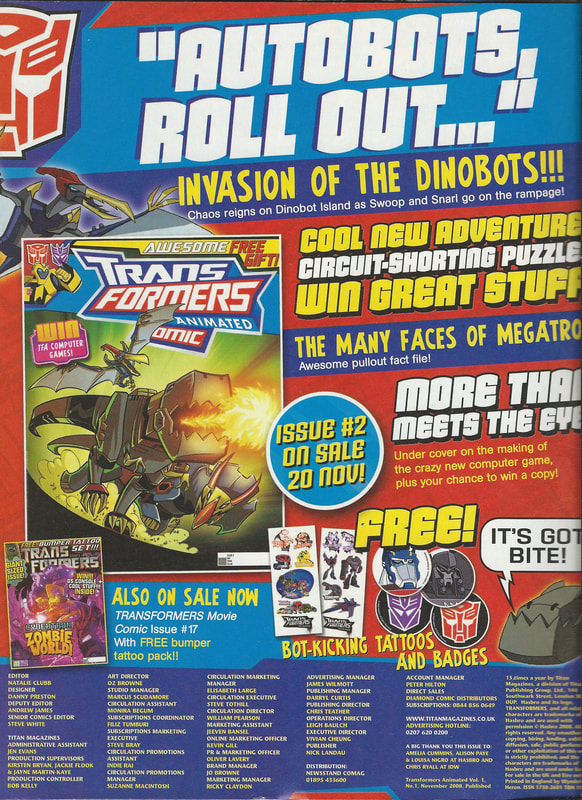