I Ain't the Worst that you've Seen. Oh Can't you See What I Mean? 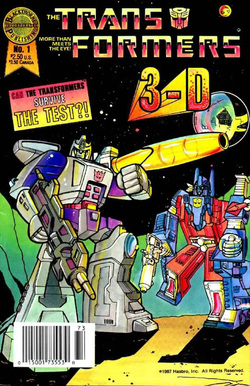 Issue 3: The War Against the Destructons, Chapter 1 of 3.

*Exactly publication dates are hard to come by, but even assuming the cover dates (starting in “Fall” 1987 are a few months ahead as with Marvel, the third issue (dated March) still has a copyright of 1988 suggesting it did indeed come out in that year.

Ah, Scourge, did you ever get the feeling you’ve reached the epitome of evil?

So here we are again, another anniversary of the Transformation project done and dusted, and in what is now a tradition (as in I’ve now done it twice, that automatically makes it a tradition) I’m celebrating my second birthday with a special Addendum.

However, before jumping into the third dimension, whilst on my week off I attended the Comics Unmasked exhibition on the history of British comics at-amazingly- the British Library, despite what the Sunday Times review would have you think (which is basically that anyone who would read a comic should be sterilised) it’s generally a very good show and well worth a look. There’s no representation of Marvel UK’s golden age of licensed comics (perhaps surprisingly as there’s a heavy focus on Alan Moore and Grant Morrison, so you’d almost expect the work that kick started their careers to get a mention), but considering the width of the subject and the difficulties of pleasing everyone it does a very good job.

I *HEART* Ratbat.
Ironically, what I’m talking about today is the first Transformers comic I’ve covered to not have been published (or at least republished) in the UK. Indeed, it’s also the only comic I’ll be covering from the ‘80’s not to be from Marvel. Blackthorne were a relatively short lived company that is best remembered for its 3-D comics on various licensed properties, which despite being successful initially ultimately destroyed the company when they paid over the odds for the 3-D rights to that classic Michael Jackson film Moonwalker.

The fact they sold their titles outside of normal comic retailers (at places like Hallmark) probably explains why they were able to grab the licences for things like Transformers, G.I. Joe and Star Wars whilst Marvel still had them. Considering they were only going for three years the amount of published titles on their Wikipedia page is basically insane, and I suspect (with no evidence whatsoever) that the vast majority of 3-D comics ever published ever were put out by them. My favourite is the Bravestar in 3-D comic, I don’t even like Bravestar that much but I’d slap a nun to read that.

This is actually after the great 3-D cinema boom of the decade, which had peaked between the release of Friday the 13th Part 3 3-D in 1982 and Jaws 3-D in ’83, so with interest dwindling more and more it’s likely Blackthorne would have folded anyway even if their titles had been much better, tellingly even today with 3-D film back with a vengeance and forcing itself down your throat (almost literally) there’s been no attempt to revive it with comics in recent years. 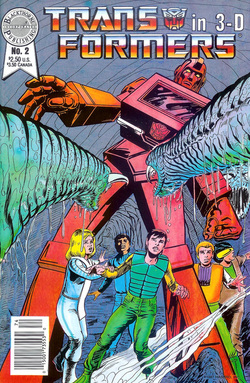 Before I glance over the issues themselves, I should say I can’t see in 3-D. So even though I read these comics (or rather the first two, I only have 2-D scans of the third) with my Friday the 13th Part 3 3D glasses firmly on my nose I’ve no idea if the effect actually works or not.

As we’ve got three issues by three creative teams it’s not a surprise that all three issues feel very different. The first, The Test, is by far and away my favourite. Presumably Tim Tobolski, credited (not in the issue itself but in an advert beforehand) for script and co-art duties with Bob Versandi is the man to thank for this.

It’s basically a slight issue of a group of Autobots and Decepticons having a fight over some aliens who crap energon (the first time in any media it’s displayed as a naturally occurring thing) that eventually turn out to be working for the Quintessons. It has two main pluses, the first of which is it’s genuinely very funny, being played as a farce as Searchlight and Ratbat spy on each other’s bases before accidentally leading both armies right into one another as they flee.

The best gag here is that Galvatron (and I should say the continuity on these first two issues is very vague) thinks Ratbat is his pet whilst Ratbat is actually super smart and plotting to his own ends. But you’ve also got Searchlight being annoyed at receiving a call to arms when he just wants to explore the dark (and hey, it’s Searchlight doing something!), Cyclonus being all jealous at how Galvatron strokes Ratbat and Lightspeed being worryingly keen to do evil experiments on small animals.

The art is also fantastic, being far more stylised and, well, fun than anything we’ve seen on the American issues to date. All in all, if you’re only going to sample one 3-D issue, this is the one to go for; cute Sky-Lynx and Hot Rod talking about Rodimus as if he’s a different person are just icing on the cake. 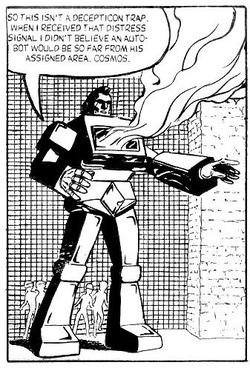 Special Guest Star.
The second story however, is so bad the title doesn’t even want to be associated with it. Poor toy based art that seems to struggle with the 3-D concept (there’s lots of odd framing of characters backs) hides a deeply dull story about Ironhide and Cosmos saving the parents of some dull kids with a magic psycho cube. Or something. The only real item of interest is the inclusion of Ironhide in an 1987 comic, the opening text seems to be aware this is a bit odd and thus tries to make a big deal of it being a tale from the “Bygone” days of the Transformers, but as he’s fighting against Galvatron and Octane it just leaves you scratching your head. I guess author Dennis Francis just really liked Ironhide?

The third issue manages to get a name, The War Against the Destructons, Part 1 of 3. Yes, in a major development for Transformers comics, we’ve arrived at the very first example of a storyline that will never reach completion. Amazingly Furman isn’t involved, but he will make up for it by being behind the bulk (but by no means all) of them in the years to come.

It also feels very prescient in having the Autobots and Decepticons team up to take on a bigger and deadlier new robot race, effectively pre-dating Generation 2 by about six years. The art (which, along with the story, seems to have been worked on by just about everyone in the office) generally has a nice solid Lee Sullivan feel to it as well. 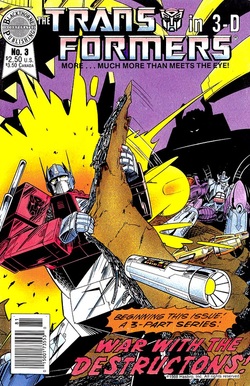 However, whilst it’s a competent read it’s also a little dull. The Destructons are a dull bunch and, as there’s only five of them, it’s hard to see them as that much of a threat. An awful lot of the issue is spent on non-Transformers as well, suggesting an old script dusted off for use with the robots in disguise.

The best bits involve Optimus Prime (this seems to be vaguely aiming for cartoon continuity), firmly taking names as he violently deals with every Decepticon in front of him, resulting in a fantastic panel of him giving Slugslinger what for. There’s also a fun sub-plot of Galvatron and Scorponok having a rather petulant fight.

Whilst this is probably the one for people who prefer their Transformers more serious (unless one of the following parts would have contrived a get out for him, Kup dies!); it really doesn’t come anywhere like being as much idiosyncratic fun as the first issue. It also seems to be by far the hardest to get hold of.

With only three issues and a gimmick that would involve extra outlay than IDW’s normal cheap as chips reprints (though I’ve no idea how much 3-D glasses would push the profit margin down) these are unlikely to see the light of day again- the best bet might be a straightforward 2D version akin to the scans I have chucked together with the G.I. Joe issues. Or even just their non-3-D How to Draw Transformers series. Sadly we’ve just passed a golden opportunity to get one issue out there again as it would have been an excellent rarity for IDW to include in their 30th Anniversary Collection over some of the more widely available material. Ah well.

He's been slug-slung.
All in all, the first issue is highly recommended, the third is a decent enough read and the second can be safely ignored. However with a hit rate like that it’s hard to feel it’s a great loss that the series didn’t continue. If they’d settled on one writer/artist this might have found the focus it needed to become a decent series.

As is now also traditional, I’ll close out by thanking everyone who has been good enough to read this website over the last two years. Especially those who have now become a happy bunch of regular contributors to the comments section (which is always worth checking as they point out all my mistakes. The gits). We’re now nearly a third of the way through the Marvel UK series, and no force in the Universe will stop me reaching the end!

Or loss of interest.

Or Kelly Brook moving in next door.

But other than those things, on we go to the bitter end!

Join me over in the regular weekly (back on a Friday for this week) for the exciting conclusion to Afterdeath: One shall stand. One shall do a cosmic facepalm. 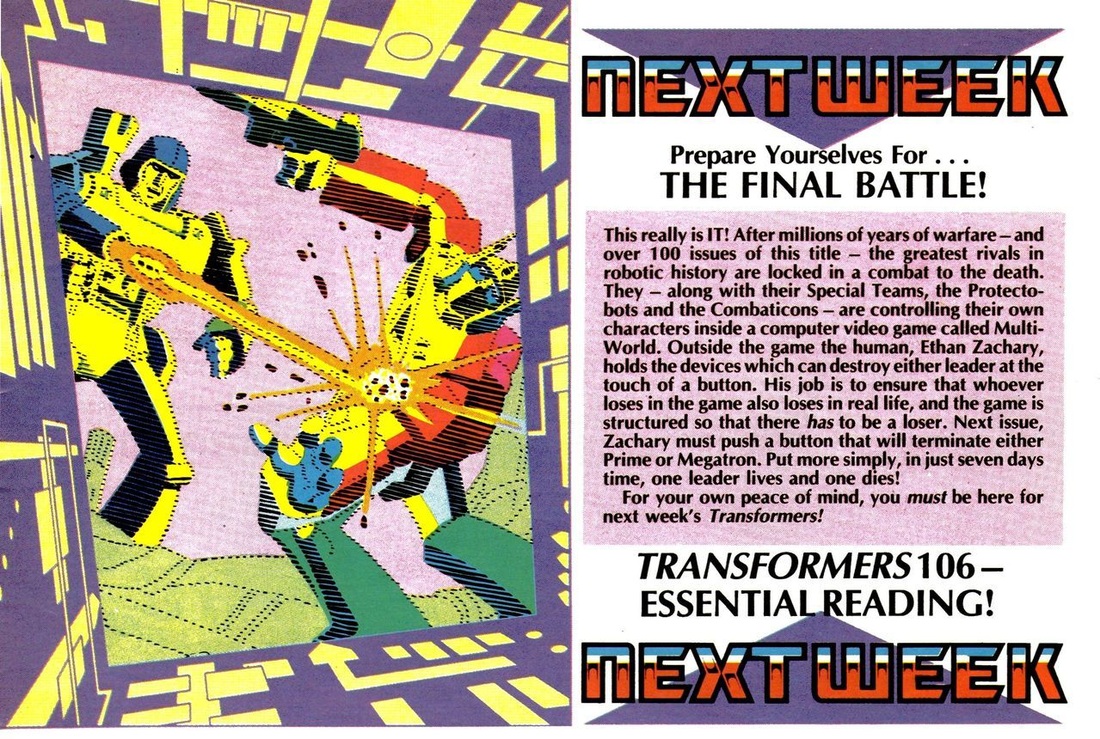