We Can't Escape the Games We Play. 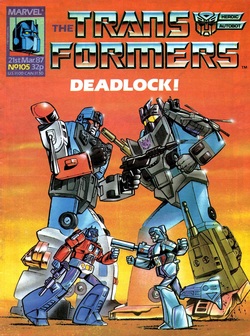 You will be called junk when I’m done with you!

It’s fair to say it’s pretty much a common consensus that Bob Budiansky stayed on the American book too long, getting more and more ludicrous and half arsed as he went along. In some ways I’d say this is unfair as there is still some good (or at least fun) stuff from him to come, but Afterdeath! is the tipping point, the moment where even his biggest and most forgiving fans shake their heads and go “This is the point he should have left”, and that’s an understandable reaction when you read it.

This is the big controversial Uncle Bob story, the one that even people who are only vaguely aware of the comic know as the Bad One. There’s at least one forum poster I know who will bring up the end of this story as their one and only counter-argument whenever anyone criticises the cartoon. Coming right after a strong run of Furman stories it’s also easy to see why it became the poster child for why the UK material is better.

However, all the stuff that makes this story really infamous is going to be in next week’s issue, these first 11 pages have plenty of head scratching “What were they thinking?” moments but they’re more in the typical Budiansky oddity vein than the full on facepalm we’ll get in Part 2.

The real surprise is both the Transformation page and the Next Week box make great play right from the off of the fact one of the two leaders is going to die. I don’t know if the American comic blew that in advance (the cover proclamation of “Game Over Optimus Prime!” is more ambiguous if you don’t know a real death is actually coming), but once the idea is put in your head this opening half can’t help but be read in a very odd way- This is the story that’s going to kill one of the main characters?

Things get off to an odd start as we get a waste of a splash page showing some computer game robots blowing up each other. They’re not real and as characters aren’t important (well, unless you’re the sort of person who’d blow themselves up over a computer game, but who’d do that?) and only serves to show that this week’s guest human Ethan Zachary is a fan of playing games on his work computer. Which is an insanely large monitor, as if someone was expecting that one day it would need to be in frame with giant robots.

Now, the portrayal of computer games in this story would be one of the things that would be very easy to rip apart and it does feel very much as if Budiansky has never played one in his life and everything he knows about them comes from having seen Tron once. But hey, that’s not uncommon in this genre (though it is odd to think that as a man in his early 30’s he’d have been too old for computer games considering how ubiquitous for people of all ages they’ve become in the decades since) and frankly the artistic licence taken with how computers work are for the betterment of the story. Imagining what this would be like if Prime and Megatron were having a realistically portrayed computer battle over the tiny monitor of a Commodore 64 ensures that becomes one area where this gets an easy pass. 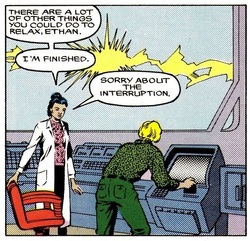 What a shirt.
The opening conversation between Ethan and his fellow scientist is quite fun as well, it’s mostly exposition- setting up both the Afterdeath cheat that will come into play next week and his day job of working on the energy McGuffin that the Decepticons are going to try and steal. But it also has a nice friendly banter to it as she’s obviously trying to hit on him (“There are a lot of other things you could do to relax, Ethan”) whilst he’s completely oblivious and more interested in playing with his joystick.

Things remain OK when we cut to the Ark, where Optimus is having the Cerebro Shell implanted way back in issue #91 removed by Wheeljack, who turns it into a reverse bug so they can listen in on Megatron, there’s some more nice banter here between the two characters over Wheeljack not removing most of Prime’s brain that results in the only moment in the entire story Optimus isn’t written in a really odd way.

No, it’s when both Autobots and Decepticons arrive at the plant Ethan works at that things start to go really, really odd. First up we should mention the Combaticons and Protectobots. There’s not even a one line explanation of where they’ve come from, making them effectively the first characters on Earth the American book wouldn’t give even the most token of origin stories. It would be nice to think that Bob was treating the audience with the intelligence to put the pieces together themselves- that both have been recently built via the Matrix in the same way as the Aerialbots and Stunticons were- but frankly it feels more like he hates these new Special Teams and just wants to get them out of the way as quickly as possible. The fact the previous two teams got an issue each for introductions but these are bunged together only helps that perception as well.

It’s here we do have to be glad Second Generation!, as poor as it was, did a lot of the groundwork for the Special Teams as a whole. However, it would perhaps have been nice if, instead of the Predacons, Furman had used the Combaticons in Prey!, they’d have fit the bill as a new combiner and that would have helped it feel less like a rip-off Gone, But Not Forgotten! (the later would have need less reworking as well).

Bob has never been particularly comfortable with “Straight” heroes and villains (and boy, his replacements for Prime and Megatron are going to be much more up his street), and the writing between the two leaders here is just really weird, mainly consisting of them posing at each other whilst playing a game of Top Trumps that ends in stalemate as it turns out that as well as five troops each they’ve also got a combiner as well. They’re about to give each other a good spanking when Bruticus captures Ethan, and another solution rather than a massive physical fight presents itself... 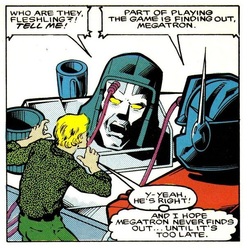 Just push the button!
This is actually a fairly neat idea, neither side wants to risk destroying the plant (Prime for the loss of human property and life, Megatron in case the hydrdrothermocline he’s after gets destroyed. Plus he actually seems scared of a one on one fight) so taking up Ethan’s offer of having it out in the virtual computer game world actually makes sense.

Well, almost sense. It’s amazing Megatron cheerfully wires himself up to a brain bomb, nor that Ethan- who is given a fairly clear sign of who is the Evil one (“A Decepticon needs no button to destroy a fleshling, the heel of his foot will do”)- doesn’t just kill him right off the bat.

The issue then ends with a rather unexciting cliff-hanger as everyone arrives in the computer world (hey, just like Tron!), and have a look around. It’s slightly edited from the original issue- removing Hotspot’s last speech bubble so a conversation doesn’t carry over the week- and gives very little sign of the true oddities to come.

This first half is a very strange one, but by itself is pretty much typical for an oddball Budiansky story, indeed “Computer games” was likely as inevitable a subject for one of his issues as rock and roll was or wrestling will be. Frankly thus far its biggest issue is being a bit dull, mainly consisting of characters posing at each other and giving cod action quotes. It’s fair to say that, whatever else it might be, the second half won’t be dull.

Art wise, Don Perlin does OK, but does struggle on the action poses in a similar way to Jeff Anderson, without the advantage of his basic art being as good. The cover is worth a mention this week as well, not only will Lee Sullivan- ahem- homage it for the cover of the Second Generation trade from Titan (indeed, as it’s basically a more “Pulled out” version of one of Perlin’s panels that winds up a homage to a homage) but it’s also unusually poor for him, being almost Pat Lee-esque in its proportions.

Hasbro UK have taken the opportunity presented by all the Special Teams having finally shown up for real to run the advert for them again for the first time in a while. That’s the advantage of the way ‘80’s toy releases worked; today you could guarantee that doing this six months later would be fairly pointless as the Teams just wouldn’t be on shelves anymore.

Grimlock is missing again this week; something Transformation assures us isn’t permanent when it rather cheekily suggests this story is likely to invite a lot of reader comments. 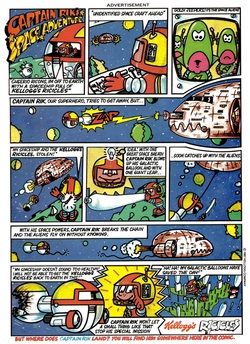 The tie-in comic to the competition.
Grimgrams is missing so the double paged Action Force advert can be run again, which frankly feels a bit of a waste. Still, to make up for it, there’s the beginning of a competition where, over this and the next two issues, an image of Captain Rik (you know, Captain Rik! The mascot of Kellogg’s Ricicles) is hidden somewhere in the comic for you to find. Send off all three and you’ll get in return... some felt tips. Doesn’t seem quite worth the effort. I couldn’t find Rik myself, buy at the very least I hope he wasn’t loitering in the main strip. Though if there’s any story a floating tiny spaceman wouldn’t seem out of place in, it’s this one.

As my first exposure to Inhumanoids continues, I must admit I’d always thought the toy-line was about monsters, so it was a surprise here to see the human characters plonk on costumes that are blatantly based on action figures (they look like knock-off Centurions), with a nice gag over the yellow one- or “Liquidator”, which sounds more of a villain name- wearing the most gratuitous poker dot boxer shorts as he changes.

Robo-Capers is probably the highlight of the week, with a nice simple gag about a robot gardener. It goes to show that even in a lacklustre issue; you can always count on Lew Stringer.

Next week, things get odder. But before that, Monday is the second anniversary of Transformation! Party hats and 3-D glasses all round as I celebrate by looking at the one English language comic of the decade that wasn’t put out by Marvel. 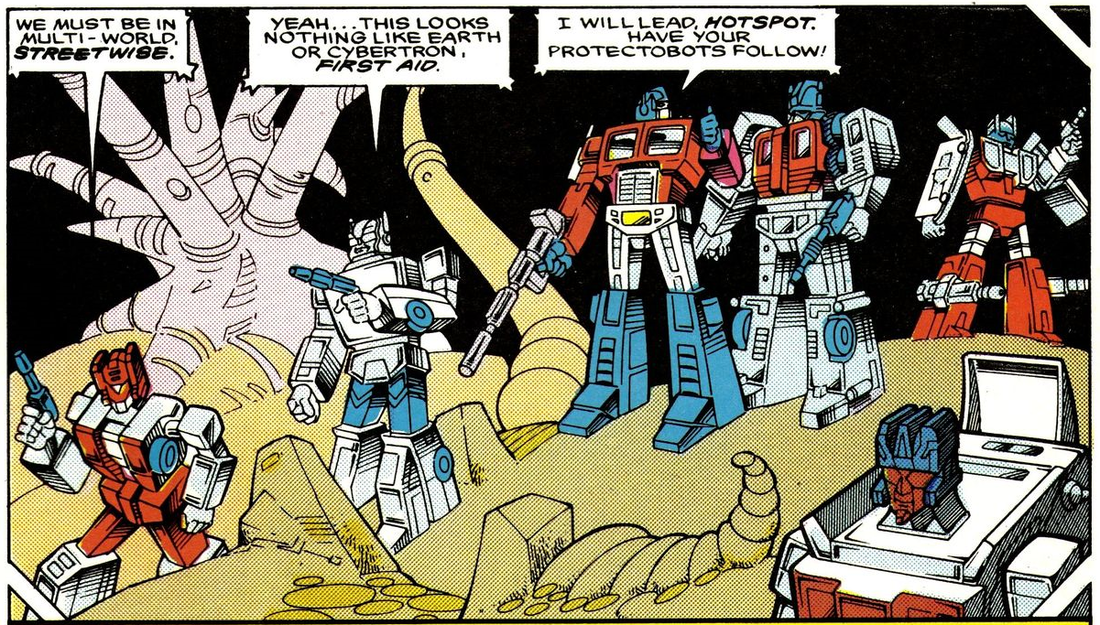 The panel with deleted dialogue.