I’m Through With Taking Falls, and Bouncing off the Walls, Without That Gun, I’d Have Some Fun, and Kick You in the... Nose. 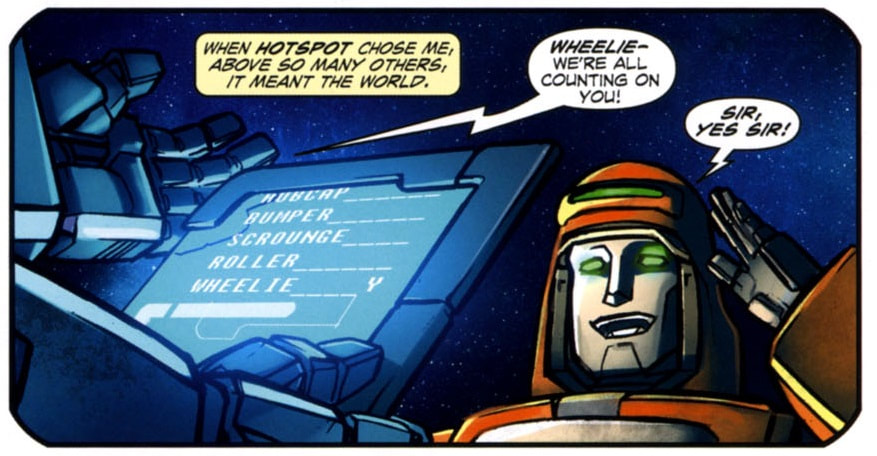 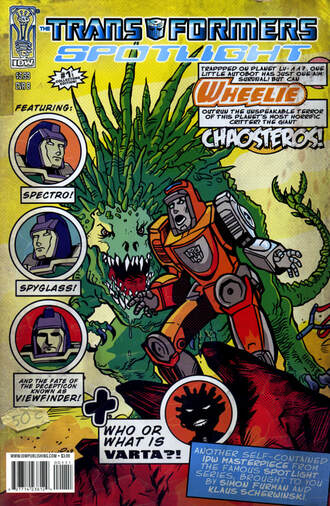 Quick update to last week, I forgot to mention the Mosaic that was included with Grimlock, Rank, by Josh van Reyk, with art by Matt C. Adams (presumably not the same Mathew Adams of Thew fame on YouTube). It can be read HERE, and is a solid attempt to square the circle of Prowl being both high command and assigned to a nowhere planet like Earth.

And starting my piece on Spotlight: Wheelie by talking about another comic is rather appropriate for a comic that is often overlooked because of two factors. First, that it came out the same day as the first issue of Furman’s solo Spotlight that I’ll be talking about next week, that will begin the grand wrap-up of his era.

The second is that the lasting legacy of this comic is that there’s a relatively easy to explain continuity error in relation to some comics later in the year (another sign of IDW editorial snoozing at the time), which will, rather than being simply explained, be made the loadstone of  a massive and convoluted storyline from John “Continuity” Barber just long enough after this comic happened for everyone to have stopped caring.

Which means, the actual 22 pages can be a little forgotten. Which is a shame because it’s another new writer (Furman is credited with the script, but he’s always been insistent his involvement was a minimal amount of helping a novice out) and artist combo, in German Klaus Scherwinski. Who had done some variant cover for previous issues and (following a gag sketch of a loaded for bear Wheelie) had enthusiastically pitched the idea of a redemptive story for the most loathed Transformer of Generation One. 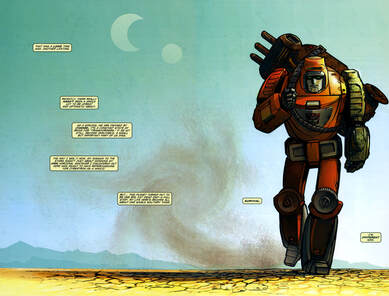 Mad Wheelie, Fury Road.
​And Wheelie was loathed. This was well before fandom was comfortable with unironically loving the child friendly comic relief character. And even now, Wheelie and his rhymes and being a general dick is more met with disdain than affection. The most natural route in the world for this to take would for it to be a full on comedy, and that’s how it starts.

At some undisclosed point in the past on Cybertron, Wheelie is the excited, enthusiastic and completely overlooked part of the war effort, doing things like handing Ultra Magnus ammunition and hoping for a more important role. Something he thinks he gets when Hotspot picks him for a deep space recon mission, though we can see from his pad, that the other’s on the list that were rejected include Hubcap, Bumper (who is dead) and Roller. Which is a joke that will be slightly ruined in years to come by Roller turning out to be Optimus Prime’s best friend.

Jetfire, for some reason taking an interest in minor space assignments, even asks if this is a wise idea once Wheelie is out of earshot, but Hotspot regards their resources as spread too thin as it is.

And with that ringing endorsement, things get more serious as Wheelie, with a blackened dead arm, walks across a desert some great time later, full of thoughts of loneliness, depression and abandonment. 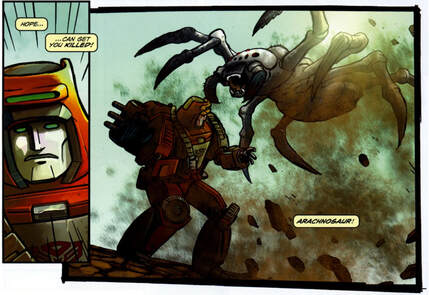 Lord of the Wheelies: The Two Towers.
​The first half of the issue is then devoted to him having seen a spaceship crash in the distance and journeying across the wilderness whilst thinking on how he got there. Which is that, as he came into orbit of planet LV-117, some strange radiation forced him into a crash landing (all of which will be expanded upon by Barber). The planet turns out to be useless, so he and his synthetic energon converter are forced to try and make a base whilst he hopes that the emergency distress call can break the atmosphere.

Which, as we’ve already seen in Spotlight: Optimus Prime, was being received, but no one cared.

His skill as a survivalist is show by him having run into a fearsome “Chaosteros” (is he making the names up himself?) and attempting the Universal Greeting on it. Which got his arm mauled and left him in a state where even thinking of transforming is painful.

His bad luck continues on his journey, as he (possibly in a nod to The Return of Optimus Prime if the Chaostreros is from, well, Chaos) a giant spider. Which he actually manages to beat off, but in a very telling sign of where his mind is, the fact he broke a fang off the beast just has him focusing on how it retreated because he was hurt rather than because it was scared of him.

He then faces a choice, carry on walking and take forever to get to the mystery ship, or try and transform with his dead arm. Something he struggles through and actually manages. 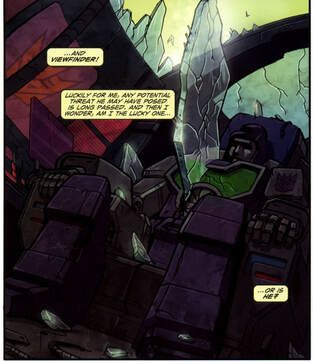 He won't be finding many views from there.
Now I must admit, upon first rereading this, I thought the comic was rather badly padding itself out with this journey that takes up a good chunk of the issue. The ship could have just crashed closer too him, and two pages devoted to a transformer deciding to transform is a bit much.

However, I realised that I may well be influenced by the comic is best remembered for what happens next, making the preceding scenes feel like stalling. And though it could have been trimmed a bit, the art is great, the present and past monster fights fun, and the broken boy take on the survivalist well done, even with “Trauma!” as the root of every 1980’s idea’s reinvention is now very tired.

Still, even if only with hindsight, it’s at the spaceship things get really interesting, and he spies that it’s a Decepticon vessel, with two of the three Reflector guys, Spectro and Spyglass (who will soon be appearing in All Hail Megatron), gleefully beating up a tied up alien.

Wheelie views this as an opportunity, using his slingshot to disable the alien’s restraints so he can do a runner, with the Decepticons pursuing, allowing him to get aboard the vessel. 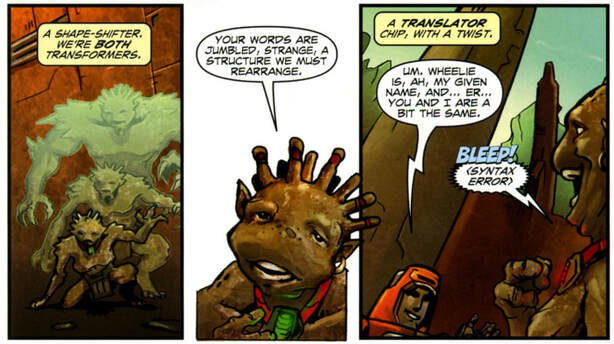 I'm not even going to try and think about how two characters not really speaking English are rhyming perfectly when translated for us.
​Which will never fly again. This is also the point he remembers the “Two of three” thing, but luckily Viewfinder (who is about to appear in All Hail Megatron) has, in an impressive visual, been skewered through the chest by a massive shard of glass.

So you can see where the continuity issues begin.

Wheelie now realises what he’s done, betrayed the Autobot code and let an innocent alien be his fall guy. So, with more commitment to the ideal that Optimus “Abandon Earth” Prime has shown recently, he sets off to correct his mistake.

Luckily, two thirds of a polaroid camera turn out to be rubbish at everything they do, and Wheelie finds the alien first, at his own den where, after an initial misunderstanding (and an odd moment where it turns out the alien can change sizes, an ability he doesn’t use when in real danger), they start communicating... by rhyme. Because their Universal translators have some sort of glitch.

It’s a little tortuous, but not the worst excuse for the gimmick we could have gotten. Though it surely must be taking the piss that the alien turns out to be called Varta, which doesn’t really rhyme with anything (though Llama God on Twitter suggested John Carter when trying to convince me to write all of this in rhyme. I haven’t, because doing exactly that is what makes Wheelie’s TFWiki entry almost entirely useless), so he has to introduce himself off-panel, with a narration box from Wheelie covering it. 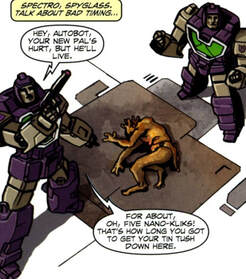 Take a photo, it'll last longer.
​What Varta really brings to the table though is his own spaceship, which is close to being repaired, but has no power. Luckily, Wheelie has his synthetic energon syphon! Though how much power does he need if his lunch box can also fuel a spaceship?

Repairs are completed and a friendship made, but just as they’re about to leave, the Reflector Two Thirds find them and take Varta hostage. And even though he could go without him, this time Wheelie immediately makes the right choice and hands over the ship. With the gleeful Decepticons leaving and laughing that their one remaining gun was out of ammo anyway, it was entirely a bluff.

But they’re not the only bluffers, as Wheelie had sabotaged the energon syphon, ensuing the ship explodes upon take-off.

So all three characters who are going to appear in the big soft-reboot comic in a minor supporting role die here. Now, of course, with the issue being set over a great deal of time, the nice simple solution for anyone who cared would be this is a great while after All Hail Megatron. But the actual explanation... is something to talk about in a few years. 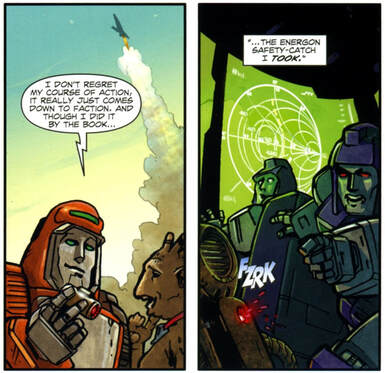 "That will teach them with whom not to fuck"
​And the issue ends with Wheelie now accepting he’s going to be there for a long time, but now with a friend who actively encourages him to chill out and relax. Leaving him feeling like he’s refound his belief in the badge he wears, so the issue ends with him saluting it.

Well no, the issue ends with the reveal of the origin behind the various hints of a fallen civilisation on the planet, as a ruin has Quintesson wall art on it. But that’s something not even John Barber would revisit when following up on this.

I’ve actually talked my way into liking this issue more than I did when I finished rereading it for this piece, and I quite enjoyed it then. The main flaw is that it really doesn’t have time to actually develop a friendship between Wheelie and Varta, so perhaps the journey aspect should have been shortened to give some page time to them working on the repairs together to show some bonding over more than rhymes.

But, this is a gorgeous looking book, and as a standalone Spotlight, it’s fun and energetic and gives Wheelie a strong arc that gets paid-off in the end. It’s a victim of timing, but whilst this is still not the moment to be doing a standalone, it does it better than Blaster or Mirage. And, even with Furman’s help, it’s a promising debut from Scherwinski that should have been the foundation for more comics. 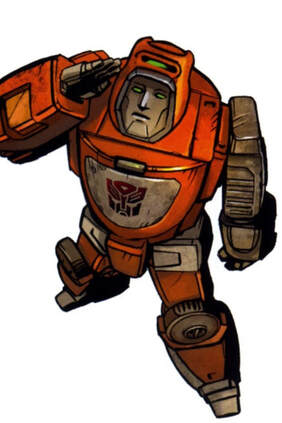 I salute you!
So, naturally, IDW didn’t use him for anything but covers again after this. His TFWiki page doesn’t mention any other writing work after this, but I hope he found other creative outlets as he shows some real potential here.

And this is where the original concept for the Spotlight series ends. There are three more runs after this (with one additional odd outlier issue we’ll come to in time), and all three of them are presented as part of a connected miniseries, even if those connections are sometimes very tenuous. The Furman wrap up volume, the All Hail Megatron tie-in and the Dark Cybertron prelude. The idea of a series of character focused one-off stories, which the series has never done very well with any consistency anyway, dies a quiet death with Reflector. Which is a shame.

But, that new Spotlight direction started on June 18th as well, and that (plus the special teaser for the other major series that’s about to start) will be what I’m talking about next week. 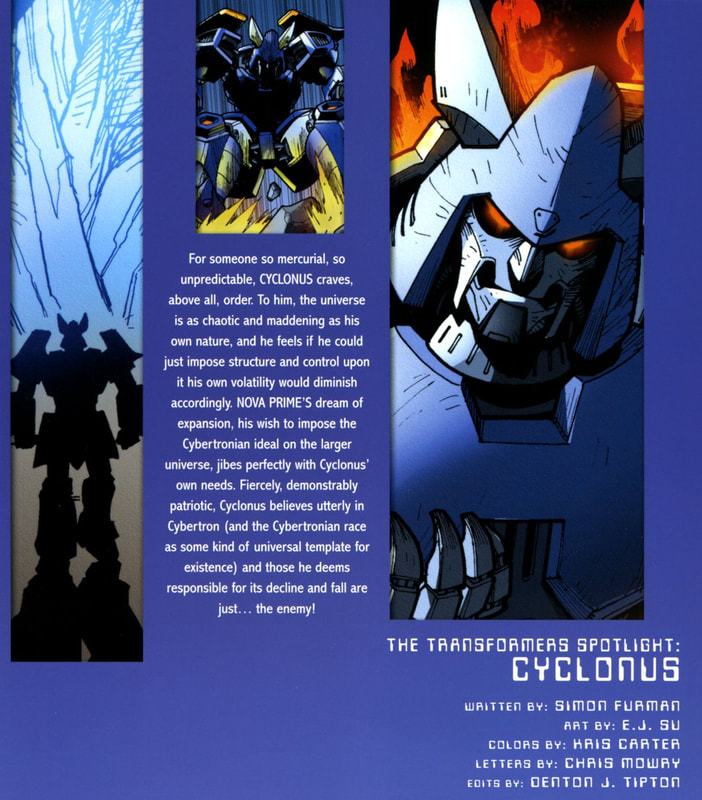