Yeah, are You Questioning Your Size? Is There a Tumour in Your Humour? Are There Bags Under Your Eyes? 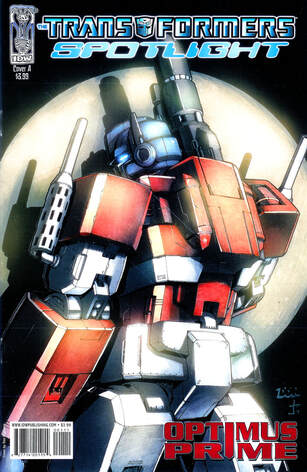 Help us? If you want to help us, die quickly.

Though I am being a little tongue in cheek there, this was probably down to a combination of a desire to improve sales (there’s only one more regular volume of Spotlights to go and it’ll be trying hard to shake things up) and have something Optimus focused as a counterbalance to the concurrent Megatron Origin.

The first thing to say about the issue itself is that it really is the last time Figueroa was the unassailable top Transformers artist. Two months later he’ll start on the second Beast Wars miniseries before walking off it halfway through (probably for good reasons, IDW treat artists like crap) as the first step towards pouring lots of oil on his bridges and then asking for a match.

It’s also an issue that is both key and not key to the ongoing lore. In that we get all sorts of backstory, much of the exact details of which will be (in some cases almost immediately) retconned, but at the same time the spirit of what it’s trying to say will be stuck to, till almost the very end of the first IDW continuity. 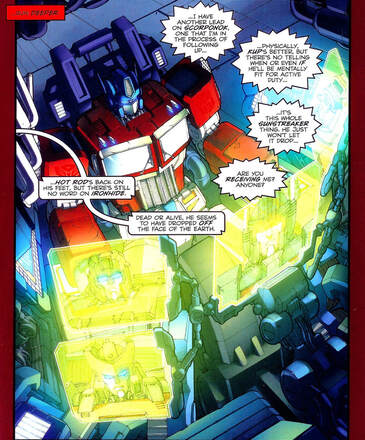 Haha, imagine if they made that Wheelie gag a whole comic. Unless...
​The opening is a parallel to how we first saw Prime in Escalation, sitting in his command chair and listening to different messages from the likes of Springer, Ultra Magnus and a being ignored by everyone Wheelie (a gag in one line that will become an entire comic next year). But his mind is elsewhere as, rather as Furman previously did in the Marvel UK story Cold Comfort and Joy!, he mentally deals with the trauma of his recent death.

Not so much the scars of the fight itself, but the face he saw when in “Infraspace” that he recognised, as that of a previous Prime.

Which means Prowl can’t get his attention as he tries to advance the ongoing plots (including that Ironhide has been completely misplaced), instead thinking of the great lineage of Primes, his two immediate predecessors Sentinel and The Mystery Face (plus previous ones in shadow), and his worries about how the evil he felt from that visage is now making him doubt their supposed great strength of character.

This is probably the big irreconcilable with later stories elements as more Primes will be inserted between Floaty and Sentinel and Sentinel and Optimus. Also, many flashbacks will reveal Optimus is well aware and deeply involved with trying to change the corruption of the Autobot government. 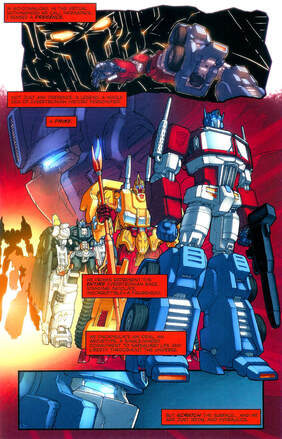 "I remember every Prime that I see, from Prime A to Prime Zeta..."
​Of course, you can’t blame this comic for subsequent retcons, but it is bad editing that this came out alongside Megatron Origin, which reveals the Autobots were a totalitarian evil regime and Sentinel is a very angry violent cop. So, Optimus is either an idiot or has a very broad definition of “Good”.

The worry the Primes may have been the wrong sort of fascist means Optimus decides to give up on Prowl entirely as he tries to explain what’s happening in the geopolitical situation (very wise, it’ll never really come up again) and instead to go see someone who knew his predecessor personally: Omega Supreme, on an asteroid in the Muta-Gaath nebula.

Now this is Furman being clever and playful, Optimus going to see the big guy for a story of the old days immediately puts you in mind of The Secret of Omega Supreme, a TV episode that reveals the secret origin of a combiner team.

Though it won’t be the one you’re expecting.

Omega is indeed a giant, plugged into his chair for reasons that don’t become apparent (though some of the plugs go into his groin, so maybe Prime was disturbing a private moment). Intercut with a spaceship approaching full of 6 Transformers that want A Word with Omega, Prime asks the question that finally puts a name to the floating head: What was the deal with Nova Prime? Because Optimus now has an overwhelming sense he might still be alive. Which isn’t great for Omega as the two of them... disagreed. 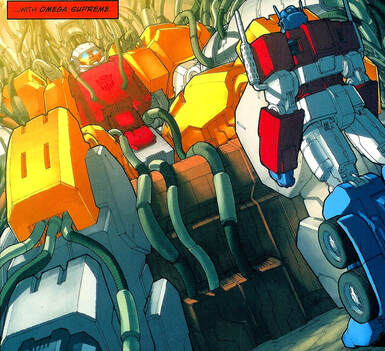 "It's really not my bag baby"
​It turns out Nova was, as we’d say now though I don’t think the phrase had passed into common (Western) usage in 2007, a coloniser. Who wanted to go out and carry out an “Expansion”, subjugating and conquering the lesser species as Cybertronians are clearly better. With the whole Ark 1 mission being a front for the start of his empire building.

And because he hasn’t read Megatron Origin (lucky bastard), Optimus is shocked and horrified the Autobots could have hidden corrupt agendas in government.

But he doesn’t have time to let this sink in as the room shakes and in bursts...

Which is probably the last great moment of innovation from Furman, in the spirit of Headmaster Sunstreaker. The first combiner, the desperate template that many have tried to copy but no one has yet managed, is a gestalt that made his first comic appearance in the February of that year (in the final G.I. Joe Vs The Transformers comic from Devil’s Due), 17 years after the toys came out. Which was probably a record that only some of real obscure Action Master partners can have beaten since. 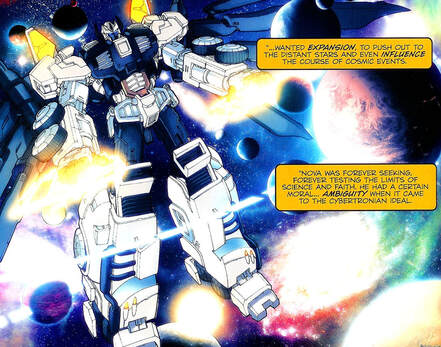 A fascist Prime? In this economy?
This is a good point to mention that though the combiner team (the individual members of which had appeared in one Marvel US issue) are the Decepticon Pretender Monsters, they’re not Decepticons and they’re not Pretenders in this continuity and never will be.

One surprise for me is I’d forgotten that there weren’t more historical flashbacks in this issue, instead the remainder is largely a huge fight scene between Omega, Optimus and Monstructor that blasts all the way from Omega’s asteroid home to the icy surface of a comet.

It’s visually great, with lots of lovely moments that real sells the scale of the two giants as even the Ark that bought Prime there gets casually used as a blunt object.

The only real misfire is an addition from colourist Josh Burcham that initially looks cool till you think about it for a second: The hilt of Prime’s gun is made a power gauge, glowing blue and getting lower as he keeps firing. Which is actually a really stupid thing for any soldier to have on their weapon, you really don’t want anyone your in combat with to be able to see how much your gun has left to go. 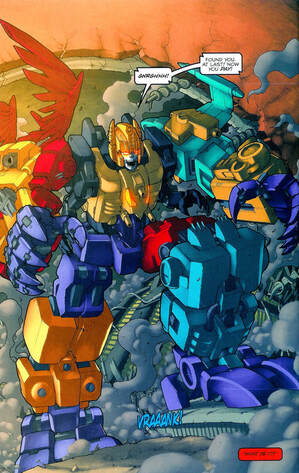 Daddy's home.
​In-between the punches, Omega has time to explain that Monstructor was the creation of the as yet unseen chief scientist Jhiaxus (the first Marvel created character to have been ported over as more than a background extra, though he’ll ultimately be just a name and a colour scheme in common with the original), intended to make the ultimate fusion of mind and body in keeping with Nova’s eugenics ideas. Instead of evolving, they de-evolved into a monster that Omega had to lock up in a “Dimensionally displaced prison”.

Boy there are a lot of times a dimensionally displaced prison would have come in handy in the next 12 years. It’s also completely ignored here how the not-Pretender Monsters escaped from what sounds like a pretty tough prison. Maybe this will be a mystery that gets explained later (Twitter suggested not though when I asked), but it’s not even a question here.

Optimus is horrified that what are effectively victims of medical malpractice have been treated this way and now considers Omega to as bad as Nova himself.

In a nice touch, he tries to his best to apologise to Monstructor and offer legitimate help, but for now at least the beast is too far gone and he has to use the handy secret weak spot Omega points out to take the combiner down. But even then, he’s still determined to do something to help them. 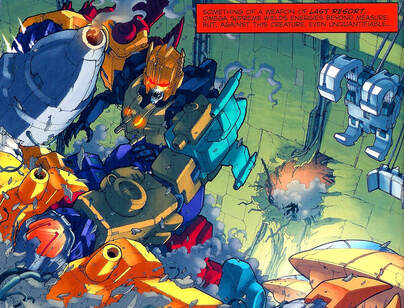 First Buzzsaw. Now Monstructor. Keep away from the animal guys Omega.
Though it’ll turn out this will mean sending them to a non-dimensionally displaced prison so maybe he’s not so different after all from those his criticising.

The issue then ends with him worrying about the scars that won’t heal because of all he’s learnt. Even though it’ll turn out it’s lessons he already had learnt. But some people need a few smacks around the head before they get it.

It’s probably been helped by coming off the back of some very bad issues, but I actually really enjoyed that. It is fairly light (the big fight could have lasted one page or another 20 depending on how drawn out it needed to be. There's also lots of pages with very big panels), but it’s just good fun and the ridiculousness of Monstructor as the great and great and terrible McGuffin is both hilarious and inspired. 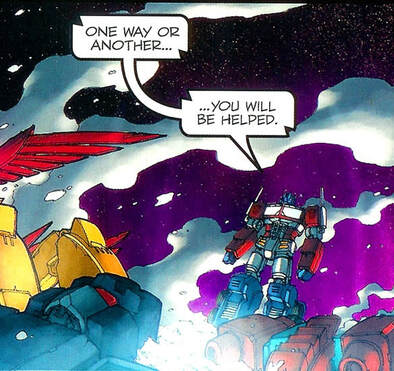 Prime has a strange definition of help...
​The first-person narration is also much lighter than in any Spotlight to date, only being full on at the start and end, which goes to show how overdone that device has been so far.

It does have a lot of strange elements when read now after all the retcons since, but on its own merits it is a much-needed return to form.

Now next week, will Megatron Origin keep this momentum going? 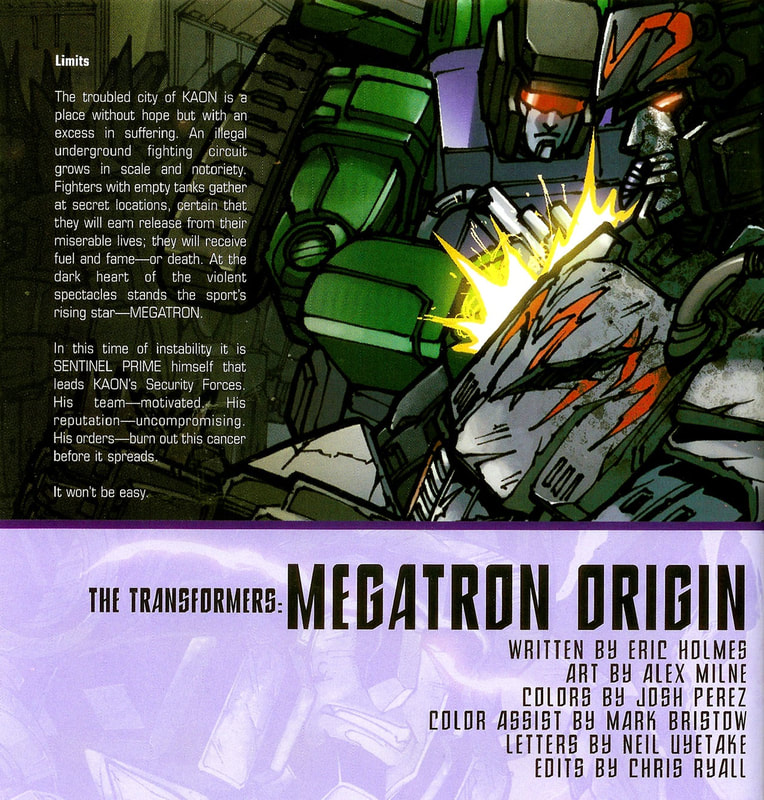