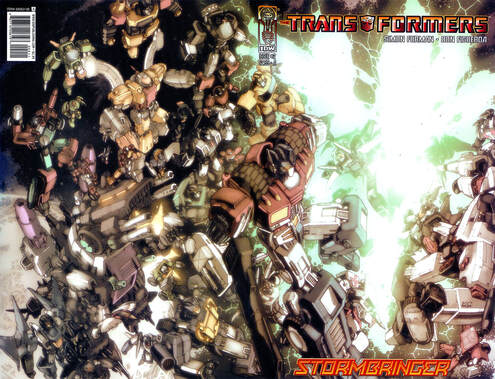 
If issue 1 of this series was getting itself nice and comfortable in the safety of Dreamwave nostalgia, the second takes us all the way back to Marvel. Starting with an opening full page spread of a city on Nebulos.

The actual context of a high shot of a city on another planet won’t become apparent till the closing sequence that gives the issue a Nebulon bookend, but there is one very notable thing that hit me when I got to the end.

Both Nebulos sequences have exactly the same type of “We saw the signs, the portents—the dark clouds gathering on our horizon” ponderous narration the first issue was filled with. And I initially assumed it was all Optimus Prime again.

But the opening narration is in red framed boxes, whilst the closing is in blue framed. Which made me wonder if it was actually meant to be two different characters. So, looking back through the first issue, I think the red is meant to be Jetfire (meaning I misattributed some of the narration that wasn’t from Jetfire’s specific flashback) and the blue Optimus. 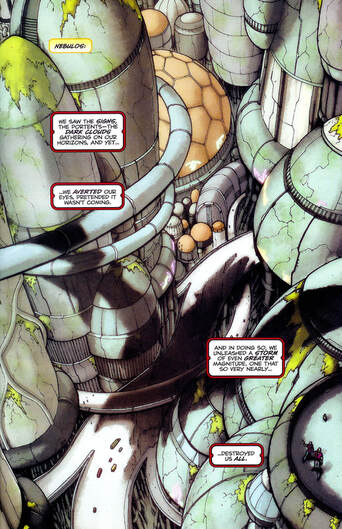 A boring page, but note the exciting narration caption border.
The italics is there on thinks because if it is meant to be two different characters, there’s literally no way of telling them apart in how they’re thinking. Not something that you should really be able to say about the thoughtful rational scientist and Robot John Wayne.

It doesn’t help that when you turn the page and we return to Cybertron, Bludgeon is talking in exactly the same “We visited this apocalypse on ourselves, we took something magnificent and turned it into a wasteland” pretentious bollocks.

Though at least this reinvention of the ninja master actually would talk like that, as he’s now a crazed cultist in comparison to his more chill Marvel days.

He is also our first real sign of something that will become a mania for Furman, taking classic Transformers gimmicks he didn’t get to introduce to the original comics and show how he’d have done it.

This will have variable results and create the problem of a book that doesn’t have any toys to promote still feeling like a toy advert as it churns through each gimmick, but the (Decepticon at least) Pretenders are rather a fun one.

The idea is simple: Rather than being robots with a weird looking organic shell, they’re just robots that look weird. With some fantastic redesigns from Don to merge each character’s original inner robot and Pretender shell. Bludgeon is not as overt as some of the others, it’s largely that his jaw is missing, and half his face is a mess of wires to represent a skull. But he looks good (and it has inspired a few toys over the years) and the other former Pretenders who are part of his cult all look fantastic. 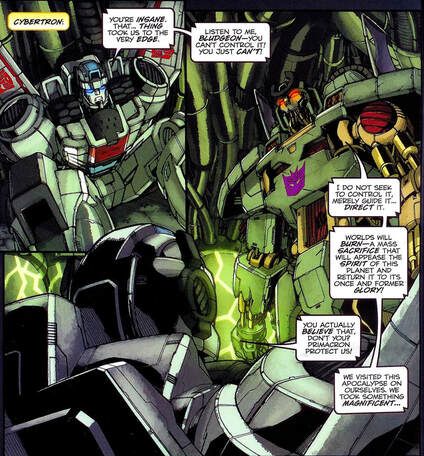 #JusticeForTheSpaceMonkey
It’s also something that works whether you’ve heard of a Pretender or not before, there’s supposed to be something odd and unsettling about these characters, and that comes across well.

Though, having come up with the simple idea of the Pretenders just being robots that look strange, it is perhaps over-egging the pudding to also have the story revolve around them trying to put a protective covering on themselves as well. With Bludgeon horrifying Jetfire by revealing he’s revived Thunderwing’s (and thanks to Jetfire having a flashback to his flashback from last issue as Bludgeon tries to guilt him over not listening, new readers realise little doom filled scientist guy and scary monster guy are the same person) “Grafting process” for surviving on Cybertron.

Though obviously taking it from other Transformers is bad, I’m not sure why the idea of a shell to protect a Transformer from atmospheric radiation is considered such a violation of science when we’ll see the Dinobots doing the same a long time before this is set in just a few issues.

There is however one quite fun gag from Furman of Jetfire swearing by Primacron (the monkey that created Unicron in the original cartoon) rather than the more usual Primus, avoided because IDW wanted to keep their options open at this point. Imagine how different the following years would have been if they’d fully committed to the SPACE Monkey. 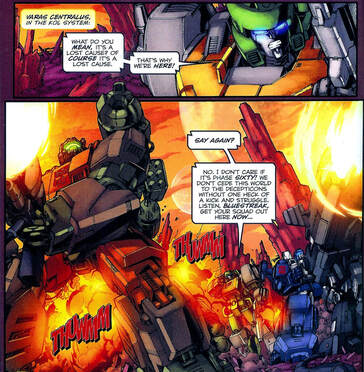 Roadbuster, thinking about spiders.
Back at Autobot command, Secretary Searchlight makes Prime aware that the distress call from the Calabi-Yau did indeed get out. And Prime, possibly glad that something vaguely connected to his endless inner monologue has come up, decides straight away he needs to call in the Wreckers.

Which is quite a big moment. As I said in my discussion of the Generations comic, who actually owned the concepts created by Marvel wasn’t completely clear to Dreamwave, who carefully renamed or didn’t directly outright state what anything they used was. Notably, a sequence of Ultra Magnus and some characters who were in the Wreckers has him saying they’ll teach the Decepticons they’re up against “The meaning of the word wreck”   and leave the rest up to your imagination whilst hoping Marvel’s lawyers weren’t reading.

Bringing the Wreckers properly to American comics is of course indulgent of Furman. But they fit the story need of some muscle and frankly it’s a fun indulgence that kicks the story up a gear.

After an issue and a bit of characters talking in faux Biblical quotes, it’s a tremendous relief to have Springer come barrelling in and be fun, making jokes about how the planet they’re on (Varas Centrallus) isn’t going to fall to the Decepticons, even if they initiate Phase 60.

The two-page battle looks great and includes all our favourite original Wreckers. As well as Springer, you’ve got a chunky Roadbuster; Topspin; Broadside; Sandstorm; Whirl; Twin Twist and of course the deeply beloved and the iconic Scoop. 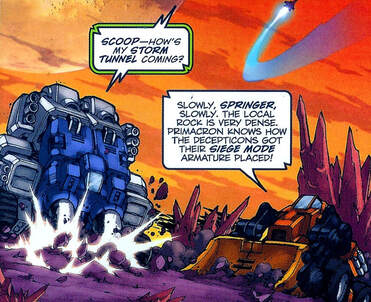 How the hell did he get in there?

Years later, Scoop will become a major character when IDW do have to promote toys, and the religious zealot (amusingly for someone who also swears by Primacron here) will only seem remotely likely as a Wrecker when it turns out Roadbuster went that way as well. Oddly, John “Continuity” Barber will completely ignore his role here, not even giving a “They just brought him along to dig a hole” retcon.

Sadly, before deadly warrior priest Scoop can do his thing, Prime calls Springer to summon the Wreckers to Cybertron. Letting the planet fall to the Decepticons.

Which is actually an important bit of foreshadowing as Devastation will end with Earth being similarly abandoned for the Bigger Picture. That they leave an entire world on fire here neatly establishes what the stakes will be there. 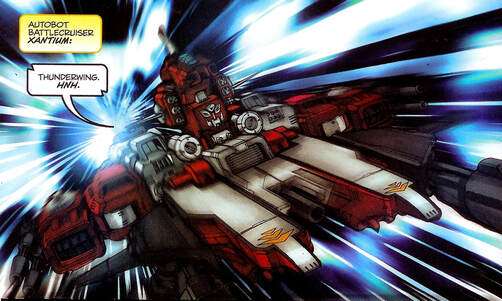 What's the story of this guy then?
After quite a fun sequence, the rest of the issue suffers from some padding. Back on Cybertron, Jetfire and Thunderwing talk in “That’s what she said” innuendo (“It’s just too big” and “Rouse the entity”) whilst establishing that Bludgeon intends to use a “Neuroscope” to control Thunderwing’s mindless body to set it off on a rampage for reasons that probably make sense to Bludgeon.

The padding comes in with Jetfire attempting an escape and, in the best tradition of padding in classic Doctor Who, immediately getting recaptured. Before being dragged off and missing Iguanus mentioning Ultra Energon. Which sounds suspiciously like what Starscream found on Earth, I wonder if there’s a connection?

In space, we get one of the most important contributions to Transformers lore IDW ever made as the Wreckers fly to Cybertron on their spaceship the Xantium.

And I’m sure I don’t need to tell you that the Xantium would also be the name of the Wrecker’s space shuttle in Dark of the Moon. 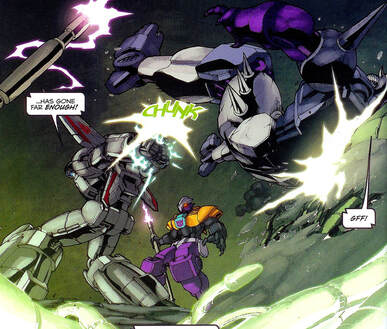 Panel 1 of Jetfire's exciting three panel escape.
Interestingly, Figueroa has designed the ship to be a Transformer itself (it has visible hands), though as this version will never appear again (indeed, Furman is going to be surprisingly restrained with the Wreckers going forward, most of their big come from other authors) there will be no follow up on this tease.

Aboard, Springer is talking with Prime about the need to destroy Cybertron if Thunderwing is indeed up and about again. Which Optimus (aboard his own Ark, rushing to the same destination) hesitates over as he has another flashback to Megatron giving him the same nuke the world from orbit (it’s the only way to be sure) advice when they fought Thunderwing all those years ago.

As this issue doesn’t otherwise follow the flashback interludes of the first, that feels a bit odd. As does a clearly padding sequence of an eager (and with a very odd face) Dogfight telling the Autobot leader how happy he is to be there and Prime being cold with him. 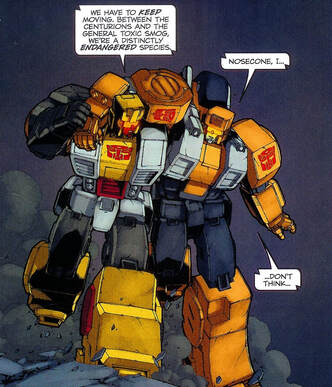 "Leave me, this badly pasted on logo is weighing me down"
The real drag though comes as we return to Cybertron and find Afterburner and Nosecone survived the ship exploding and we get five pages of them stumbling around feeling sorry for themselves (with some very poorly pasted on Autobrands) before being confronted by some Centurion (another Marvel UK call-back) Drones.

This is definitely where you get the biggest feeling this was supposed to be a subplot in another series originally and Furman has had to draw some things out to get the amount of plot up to four issues. Especially as, at this point, I can’t remember these two contributing anything to the second half that makes it worth them not just having been captured with the other Technobots.

The issue ends back on Nebulos, revealing there is also a Decepticon Infiltration unit there. For UK readers, Dreadwind and Darkwing being present was the most notable thing at the time, but in retrospect it’s future stand-up comedian (it’ll make sense when we get there) Skullcruncher that stands out. And he’ll even do a comedy routine about his job as an infiltrator, even making a similar joke to Springer’s about the nonsense that is the Phases system. 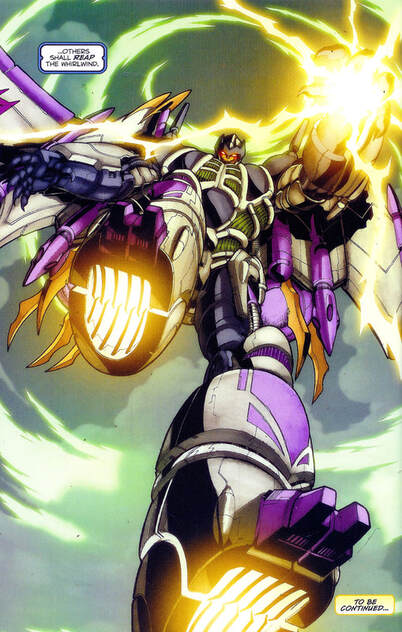 You tell me if that's a different narrator to the first page or not.
There’s no time for comedy here though as they detect the arrival of a faster than light ship... which turns out to be the accompanied by ominous narration from Prime (possibly) Thunderwing. Active, controlled and ready to wreck a world.

I rather enjoyed that, though often in spite of itself. This is still a comic with overwrought and frequently terrible dialogue and some seriously padded sequences, but the Wreckers interlude is great, and the art remains gorgeous.

And, even if it gets buried under half the characters having the same voice, it’s full of interesting ideas and Bludgeon himself is a marvellous mad bastard.

I just wish he didn’t talk like the supposedly sane guys.

But, halfway through, I think this is holding up better that its reputation would suggest.

Next week, we’re going back to the Victorian era and the second issue of Hearts of Steel.