Hold Me, Thrill Me, Kiss Me, Kill Me. 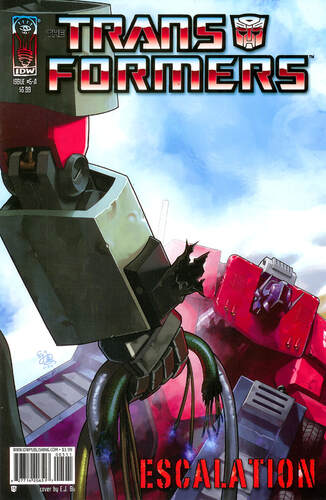 
As far as I can see, all this Ore-13 has done is loosen your vocal routers!


This is, as far as Escalation (and arguably the entire Furman run) goes, the big one. The centrepiece first fight between Optimus and Megatron that you’ll have noticed I’ve been half-expecting the last few issues, that the impact this impressive showcase for E.J. Su has.

Which does have the side-effect that nothing actually really happens in the issue outside of that fight, with the barest minimal advancement on the ongoing plots. Which is a risk to take, but occasionally some grandstanding is good, and this is grand grandstanding.

So, having played my hand early, it’s actually the opening page that gives over the most new information, being set in a Machination base in Tampa Florida that just happens to look like the one Scorponok was working from on Nebulos.

Inside, Dante is talking to a mysterious and all in shadow giant head hung from the ceiling that is uncannily shaped like Scorponok’s. 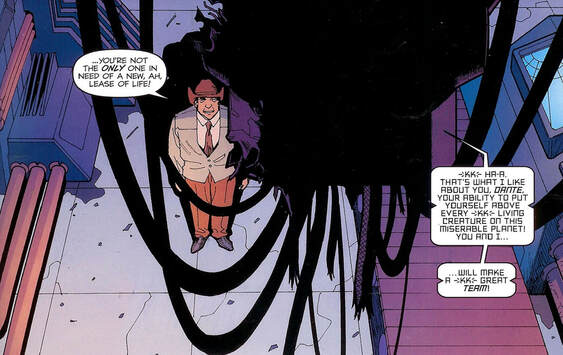 Mystery villain going to mystery.
Mr Mystery and Dante discuss how the latest test subject (Hunter by inference) has been a success and not rejected the implants, unlike some previous poor sods. Which is lucky for the two of them as they both need a new lease on  life.

Sure sounds like the sort of thing Scorponok was up to.

OK, it could only be more obvious if Dante revealed his first name was Mo and Scorponok started talking about giant purple babies, but it’s at least an intriguing opening and ties the main series into the spotlights reasonably well.

But, we’re not here for intrigue. We’re here for action. Action delivered on in Brasnya (still called Soviet in the caption, even though the Wiki claims that had been corrected from this issue onwards. Different editions having different fixes?) as Megatron opens fire on Prime.

I run the risk of repeating myself a lot here so let’s put it all here: E.J. Su’s art for the fight is brilliant, top game stuff. It’d be career defining if not for the fact he’ll go one better next year with the best drawn Transformers comic of all time. It cannot be understated how good this is, both for its action, pace and storytelling. It conveys the character of Prime and Megatron through the various stages of the fight perfectly. You could remove every word and still follow it. It is, frankly amazing. 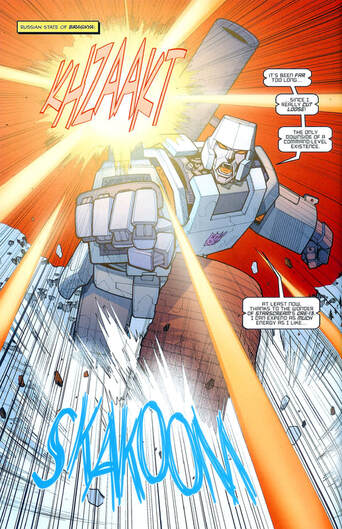 Shit gets real.
Though removing some words is definitely something that could have helped, as it’s another instance of an over verbose sequence from Furman. Not quite as bad as Stormbringer, but perhaps more noticeable as a lot of it—in order to sell the ending—is evoking the 86 film (“Bare hands”), and compared to the much tighter back and forth there, it’s a Tolstoy novel.

Starting with Megatron recapping how Ore 13 and Starscream’s antics have given him this new power and countered his usual caution. Whilst his gun fires so loudly the odds aren’t great Prime can hear a word of it.

What makes it funnier is, unlike last issue, there’s no indication of a time difference between the A and B plot, so it’s possible Meagtron has been recapping his life so far for three hours.

It’s also amusing in retrospect that Optimus is surprised by the fact that the calm measured Megatron has become a loud brash psychopath off the back of Ore-13. Sweetie, if you think this is an extreme personality shift, wait till he’s been through four more writers.

It is incredibly appealing how direct and no-nonsense Prime is through all this though. None of the doubt and insecurities that will come to define the IDW version (starting with the very next issue), here he’s all fists and determination and, whilst not quite going as far as saying it, “No matter the cost”. It’s refreshing to have the John Wayne Prime on page, and something that we could have done with a little more of down the line. 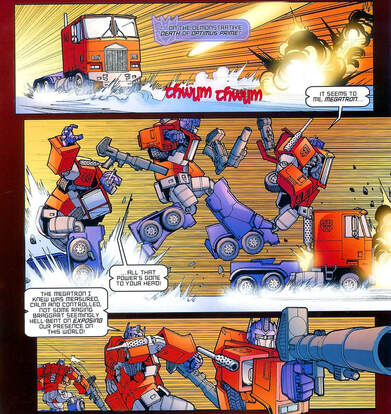 Would make Geoff Senior go "Damn".
Amidst all this, we only get one cutaway to Fort Indiana this issue, a simple three pages of Ironhide smashing into IDW (not that one) and finding Jimmy and Verity knocked out and with the countdown coming up to three minutes. These advances this plot such a small amount that it’s mainly just there so as not to avoid it entirely for an issue, with the most notable puzzler being that they have a KISS Players poster on the wall in place of the traditional girlie calendar that I suspect was already an anachronism (at least in public parts of a garage) by 2006. Though it is a funny sight gag reference to a very different contemporary merging of humans and Transformers such as the completely unknown Mr Mystery is planning.

There’s somewhat more forward momentum on Koska, literally as there’s a wonderfully comedic moment of him walking towards the Russians, waving his arms and shouting “Death to the invaders!” as he attempts to goad them into killing him.

With the Decepticons temporarily held back (though Skywarp, after a funny moment of him failing to make his teleporting skills work to his advantage as Wheeljack and Jazz just shoot everywhere, has gone for reinforcements), Prowl and Hot Rod can try again to make up for their prior screw-up. With the frustrated Prowl and eager Hot Rod making a fun team, even if Hot Rod winds up with some of Prowl’s dialogue (again, your edition may vary).

And this time they pull it off, with Hot Rod successfully knocking down Koska (I hope FCs are tougher than humans) before grabbing him in a panel so adorable that it nearly beats all the fight sequence for best moment of the issue. It looks like he’s hugging his official Transformers Koska (tm) Plushie for dear life. 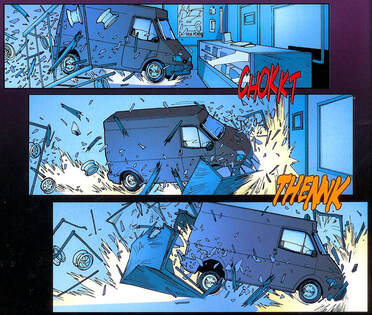 Sealed with a KISS.
Prowl also gets to be effectively stern, telling the Russians (and to be fair, they are called Russians outside of that opening caption) to GTFO. Which they do at great speed.

Amidst all this, the fight takes a turn for the worse (it’s interesting that, in the original Stormbringer comes after Escalation plan, we’d not yet have seen the fatal flaw in Ore 13), with what should be a silly moment of Megatron using his toxic breath turning the tide in his favour. But under Su’s expert hand, it becomes genuinely terrifying.

There’s also a lovely bit of misdirection from Furman where it looks like we’re meant to think the clever bit is Optimus going to repeat his Roller trick from last issue, only for Megatron to be deeply unimpressed and simply smash a rock face, burying and crushing the Scout. 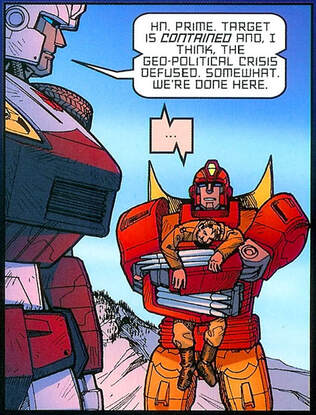 Even robots have their comfort teddy.
RIP Roller. You worked with Prime longer than your namesake.

As well as it being quite funny Megatron is used to Prime pulling this trick, the real purpose of the moment is to place Roller right there in the moment of the kill so he (and more importantly, Prime’s connection to his parts) are very much at the forefront of readers minds.

And it is the kill, with a wonderfully unsettling moment of Megatron taking great pleasure in being in at the death of another in person, before the Roller distraction means he actually misses the moment and gets to be disappointed, looking down at Optimus’ vacant dead eyes, bemoaning there wasn’t more of a speech as there was from previous Primes.

With the fact Megatron has been there as other Primes have died suggest Megatron: Origin is already well into the planning stages.

This whole fight is just perfectly executed, in both writing and art. I think most readers would have guessed it wasn’t going to be too permanent, but all the pieces for Prime’s return as well set up in plain sight without it will be a satisfying out, but at the same time not so obvious that it’s easily guessable and has a sense of anti-climax to the death itself. 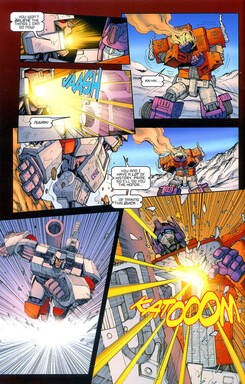 It's increasingly hard to separate the panels as the fight goes along, so have a full page of awesome.
And the art. Oh the art. From simple moments like Prime transforming and pulling his gun out to the dead eyed final panel, it is amazing. Especially if you’re reading in one of the oversized hardbacks or on a large tablet. Visually alone, this is a very special sequence that entirely justifies the slowing down of the story progression around it.

Of course, for the second issue in a row, the natural cliff-hanger is not where we end, as over in Eureka Nevada, an archelogy dig is shut down by Skywatch (who’ve moved on from hasmat suits to full men in black) as Shockwave and the Dinobots have been dug out.

Whilst it’s funny how Shockwave is waving, I do wonder what anyone not buying the Spotlights would make of any of this.

And I’m going to save my full thoughts on Skywatch for when they actually do something of note (none of this has anything to actually do with this miniseries), but it’s worth pointing out here that Furman’s Movie comics were published alongside this, so he was well aware of Sector 7 and their dig up buried Transformers and studying them antics.

Despite ending on a bit of a underwhelming moment, this is everything I remembered Escalation as being when I thought of this miniseries as the peak of Furman’s IDW work. 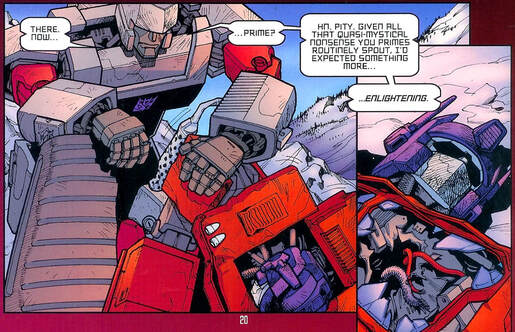 You'd think Megatron would know better after all these years...
And it’s not just the art, brilliant as it is, that’s responsible for that. He is on very fine and smart form with the writing, at least of the centrepiece sequence, as well. Very special stuff.

He even gets away with the odd indulgent slipping of old story titles into dialouge ("Another time, another place" and "In the national interest").

Next week is equally special as we get our first (intended, remembering Hearts of Steel was not canon at this point) writer other than Furman playing in the ballpit. It will indeed be the case that our Kup runneth over. 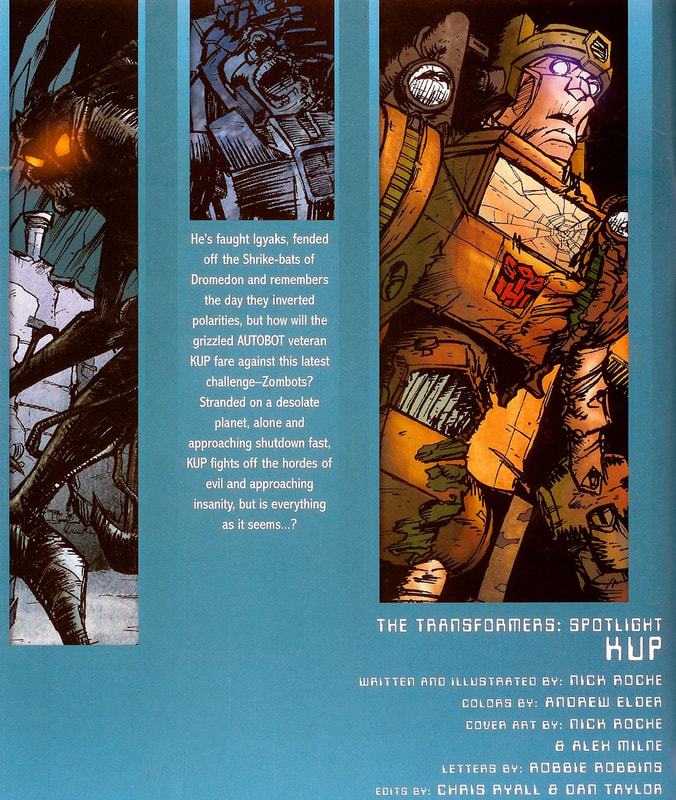 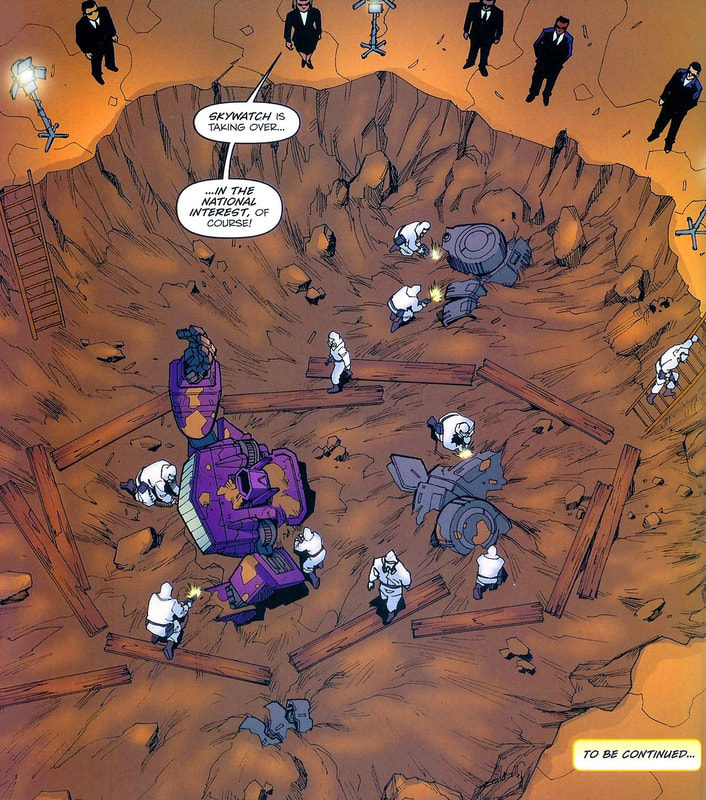