There Ain't No Tits on the Radio. 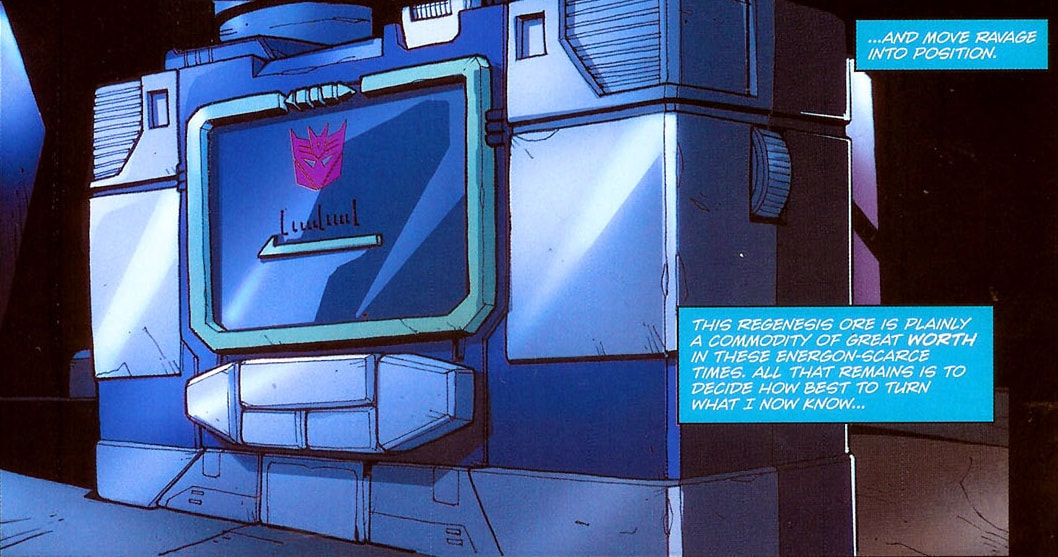 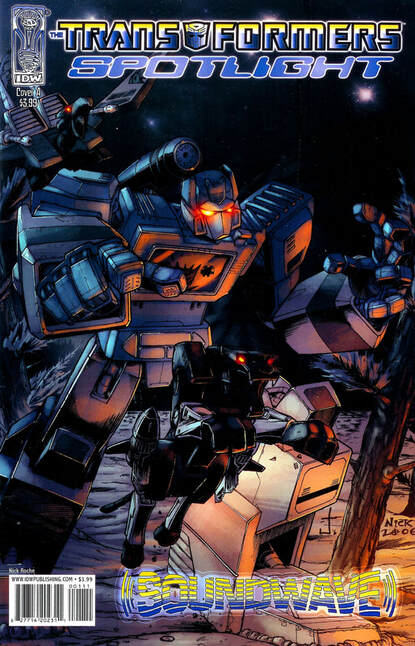 
Soundwave is, by a considerable margin, the most notable absence from the IDW comics so far, one of the top three remembered by real people characters with an iconic voice and gimmick. He’s such a fondly recalled part of 80s pop culture, generally any lazy nostalgia shows of the 90s and 00s discussing Transformers would have a Peter Kay style “A tape deck? What was that all about then?” moment.

Indeed, if you have the original UK DVD release of the ‘86 film, it has an introductory clip from BBC2’s I Love 1984 where you can see a member of the fandom later revealed to be a prolific paedophile doing just that.

Which is where the problem, and why Soundwave wasn’t initially involved in a very 21st century reboot from the off, lies. His iconic “[Tape Name] eject: Operation [Adjective]” personality is entirely down to the effect on Frank Welker’s voice, something that does not translate well to the printed page. And his alt mode is both too famous to easily drop entirely but also anachronistic and a bit of a joke.

This is going to be an issue every writer at IDW is going to wrestle with, resulting in him (and his cassettes) going through multiple personalities before John Barber eventually settled on a standard take for the character surprisingly late in the day. 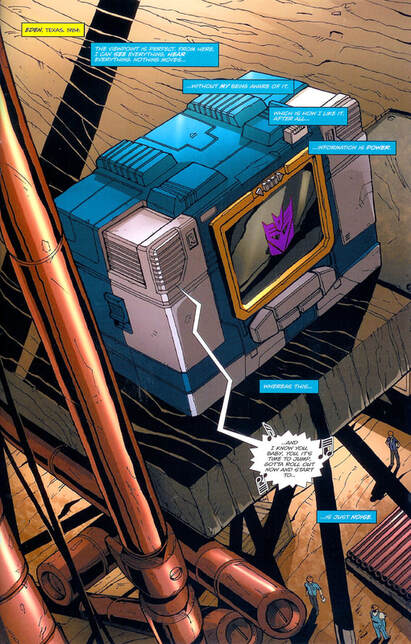 Lucky Hiro seems fine with the radio and never wants to play a tape.
So, without wanting to show my hand to early, Spotlight: Soundwave is largely a comic devoted to explaining why Soundwave turns into a tape deck in 2007.

And the answer, unsurprisingly, is he came to Earth in 1984. Where, as we open, he has become a tape deck owned by a worker on a Texan construction site where two Facsimile Constructs are overseeing work that—though no one else there knows it—has uncovered Ultra Energon for Bludgeon and his team of Pretenders.

How this came to be is explained via a device that will become even more common in later years as the continuity becomes even more involved, a flashback to events we’ve already seen that expands upon it.

In this case, the end of Spotlight: Shockwave (and from a trades perspective, it’s nice the opening of the second book calls back to the start of the first) and Megatron ordering Bludgeon to investigate Shockwave. With it turning out that immediately as Bludgeon left, Megatron ordered Soundwave to investigate him.

Which Soundwave does, but as Bludgeon investigates Regenesis Ore and digs something up from beneath Cybertron, he decides this is far to juicy to tell Megatron (who is being fed lies and misdirection by Bludgeon) about.

As we’re learning all this from Soundwave’s narration, it’s no surprise to reveal that Furman is firmly on Team Verbose Soundwave. Not just because it’s the device he uses for the Spotlight series anyway, but because he’s very much writing the plays his own game without rocking the boat too much Soundwave from the Marvel comics. 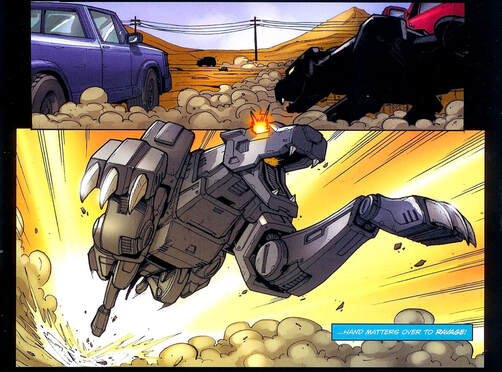 Faster pussycat.
As the work day ends (and it initially looks like there’s going to be a subplot about Soundwave’s Japanese American owner Hiro having to deal with workplace racism as he declines to hit the local bar with a dismissive colleague, but it’s a detail that doesn’t go anywhere) and the duplicates, their work finally finished, head to report back to Bludgeon, Soundwave can finally send Ravage and Laserbeak to follow them to their boss.

Which, thanks to Bomb-Burst airways, takes them across the country to Oregon and Mt. St Helens.

Transformers? In an Oregon volcano? In 1984?

This will end well.

It would perhaps though, considering how the issue ends, have made more sense for this to be set in 1980 and around the famous eruption that inspired the Transformers origin story.

In contrast to Soundwave, Furman writes Ravage and Laserbeak as their animalistic silent cartoon portrayals, with Ravage only getting one line during the final battle (“Much as I love lurking in the shadows, this is more to my taste!”) that is so like the awkward self-introductions of the first Marvel issue, I suspect it’s a deliberate homage considering the setting.

In the volcano there’s a full Blofeld style base, which is fitting as the facsimiles turn out to be called Fleming and Markham. Which, in a joke even the Wiki hasn’t noticed (at the time of writing), would be Ian Fleming (creator of James Bond) and Robert Markham (writer of the first James Bond novel not written by Fleming, Colonel Sun). 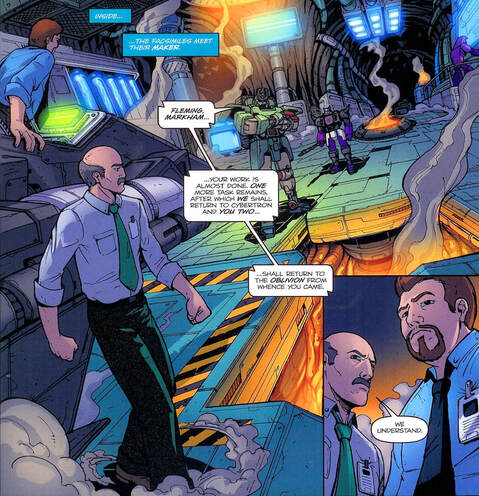 You only clone twice, Mr Markham.
Presumably that’s less an intentional nod to the source of a secret volcano headquarters (as that isn’t in the novel of You Only Live Twice), more Furman just glancing at his bookcase when naming them. But it’s nicely meta as Robert Markham, being a pseudonym for Kingsley Amis, isn’t a real person either.

Turns out Decepticons have a real thing for talking to their pets like they’re people as, just as Megatron is doing with Koska in Escalation, even though they’re going to die as soon as the job is done, Bludgeon takes the time to explain his evil plans to them despite being mindless meat slabs.

This being that they will plant a McGuffin device at the construction site, which will cause a break in the mantle and a massive explosion, letting his team go in and grab the Regenesis ore.

With Laserbeak having overheard this handy speech, he returns to grab Soundwave from his confused owner’s hands in the morning, ensuring that when Team Bludgeon is raiding the site, he will be waiting for them back at the volcano.

Amusingly, and oddly considering it’s such a thing in the concurrent Escalation, Soundwave can mass-shift easily and will no destructive side-effects despite only being on ordinary Energon, as he reveals himself with a Steve Buscemi style “Greeting fellow Decepticons” and, in the finest tradition of his tec-specs, is prepared to ignore all this and not tell Megatron in exchange for a payoff. 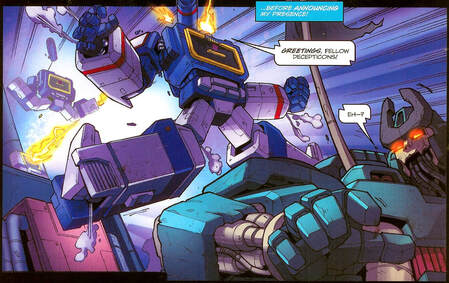 Soundwave: Undermining the entire central concept of mass shifting introduced a whole issue ago.
Which gives us the best character beat of the entire issue, as Bludgeon declares Soundwave is an idiot, there’s no sneaky greed going on here, they’re bringing back Thunderwing. Which absolutely horrifies Soundwave. He’s fine with energon laundering, but at heart he’s a patriot and remembers all too well what Thunderwing did the last time he was out. So, he fights.

Of course, this also reveals the big problem with this issue, Soundwave is investigating a mystery and given a shock reveal we as readers already know all about. A lot of this is very redundant.

Still, artist Marcelo Matere, who has already been doing good work on the issue so far, gets to have a great time with the following Soundwave and the Tapes Vs Everyone fight, with an especially notable moment of Bludgeon taking down Ravage by targeting his one weak spot, the midriff. 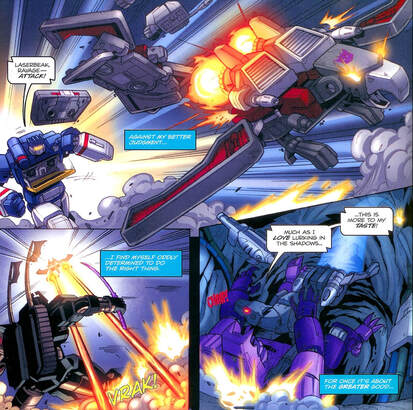 They've had enough of you trying to cut the DJ out when you tape the Top 40.
He should get that checked out before something lethal happens.

Things end with Iguanus pulling out a super-secret Shockwave weapon that deals with Soundwave simply by forcing him into his useless tape deck mode and trapping him in it.

Shame Iguanus must have put that down and forgotten where in the following two decades as it would have been handy in Stormbringer.

This is of course a meta commentary on those aforementioned Peter Kay style jokes about a tape player war machine and, to add insult to injury, Bludgeon has some of those make lava explode bombs left, which he cheerfully chucks into the volcano before beaming out. Resulting in a massive eruption.

Just don’t go near a volcano if you’re a Transformer.

Which you’d think would be the end for poor old Soundwave and friends, but two epilogues reveal otherwise.

The first is set in 1985, and has a group in has mat suits called Skywatch dig out Ravage and Laserbeak, as their head, the latest ridiculously named human in the series, Joshua Red is excited that this will get them their full funding. 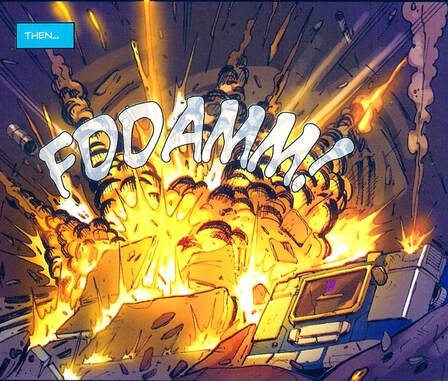 Oh no, not again.
Now you’d think that with the Machination, the books don’t need another sneaky human organisation. Even if this one is the Feds. And you’ll be right, everything to do with Skywatch is going to be terrible, as I’ll go into more as we go along. But suffice to say, you’ll never believe these guys have been doing this for twenty years.

The second epilogue is set in 2007, and reveals Soundwave can survive a volcano exploding in his face without a scratch and is now in a pawn shop, being looked at by two kids, one of whom wants him as a retro plaything whilst the other intends to stick with his IPod.

Which has an irony to it in 2021, where (largely off the back of Guardians of the Galaxy) tape has made a comeback, largely as an indulgence considering it doesn’t even have the “Better quality” argument of vinyl bores. Indeed, Robbie Williams’ 2019 Christmas album was the bestselling cassette release in 30 years.

Now, on the other hand, when did you last see an IPod now we all just listen to stuff on our phones?

Though no doubt they’ll be making a retro comeback in about ten years as well.

Yeah, stick with your IPod, loser.
This is a very awkward issue. Soundwave gets some nice characterisation and the art is lovely, but it’s almost entirely redundant, repeating information we already know and spelling out things that didn’t really need it like how Bludgeon raided Earth to get the ultra-energon he used to revive Thunderwing.

The actual new material that’ll be key to ongoing plots—that Soundwave came to Earth and had an accident—could easily have been covered in about two pages of flashback when it becomes important. Especially as the Skywatch side of things with Ravage and Laserbeak is going to be a dead-end that makes the Reapers look like the most essential characters.

Which is something of a disappointment as a way of bringing someone as iconic as Soundwave into the comics.

But, if this issue is largely pointless, next week hits one of the key and most memorable moments of the era, in Escalation issue 5. 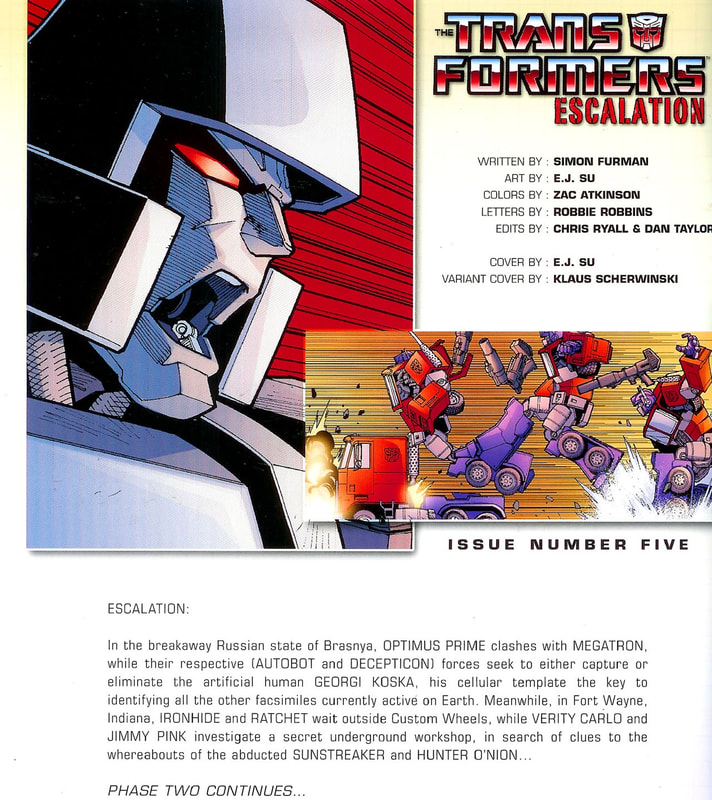