Russian life Was Very Sad, and Such Was Life in Leningrad. 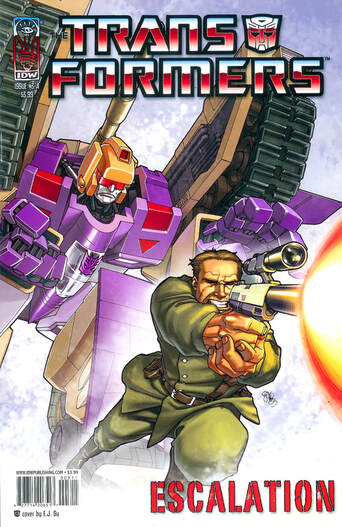 Trust me, I’ve been a commissioned officer for seventeen years and haven’t yet fired a shot in ang-AAH!

Before diving into the first issue of the main arc in 2007, a quick bit of housekeeping. Long-time reader Charles EP Murphey has found an old interview with Furman that goes back to before even Infiltration started and confirms Stormbringer was indeed always going to be its own miniseries, but was meant to come after Escalation. Of course, with the change happening before even issue 1 of Infiltration was released, we still can’t be sure exactly what form it would have taken or how the different series would have connected, but it’s still a useful nugget of information.

What we do know is that the third issue of Escalation is by far the most Ultimates so far. In particular, an extremely Noughties attempt to make superheroes (or robots) look cool and relevant by asking how they’d impact real world politics, most heavily represented by “What do you think this A stands for? France?”, but there were lots of running about the Middle East and George Bush showing up in mainstream comics of the time.

Furman, perhaps because of Hasbro, perhaps because he’s at heart an 80s writer, draws back from using real world countries... But it’s incredibly clear here that Brasnya, a former Soviet state in a state of near permanent conflict with the Soviets (apparently the USSR is back from how often that word is used in the issue) where rebels are constantly fighting for their freedom is Chechnya. 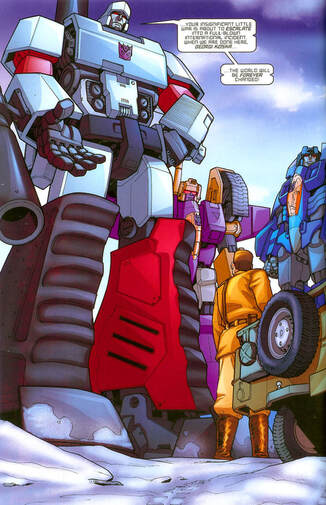 Big Bois.
A Chechnya where Megatron has in fact put a Facsimile Construct, one Georgi Koska, in charge of the rebels and is now stirring up what will become a major international incident by destroying a Soviet (see) oil pipeline and pushing the two sides into confrontation.

And I’ve kind of compressed an entire issue’s worth of reveals into a paragraph there because I’m not entirely sure it’s not in bad taste to take a very contemporary and real conflict and boil down the legitimate cause of one side to “An alien made them do it”, even with the name changed.

Especially as, in a song I’ve sung a few times now, the forced shortening of the main arc means Megatron’s plans will ultimately never get far enough for this to get any sort of real payoff.

Certainly, I don’t think a comic now would be quite so on the nose, but you certainly can’t say Furman is not successfully capturing the style of the time.

What is fun though is how Megatron, on the scene with Skywarp and Blitzwing, treats his new pet. Largely by giving his mindless flesh puppet long speeches carefully spelling out his plot for no reason (again, you can take Furman out of the 80’s comic writing, but you can’t take the 80’s comic writing out of Furman), something that actually ends up so ridiculous it becomes quite endearing. 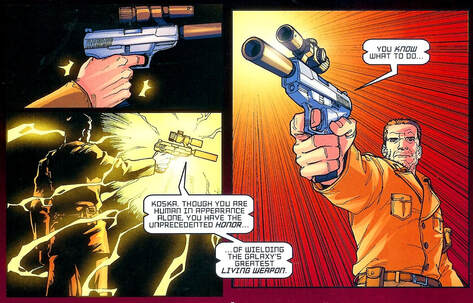 The Man With No Uncle.
He also transforms into a handgun for the fake rebel to wield. Which, because of two decades of joyless fans asking pointless questions on forums, is given a degree of pomp by Megatron spelling out for the first time in Transformers fiction (though it had reared its head in the Dreamwave guidebooks) that mass displacement is involved and is so difficult, everyone needs to stand back.

I always felt the need to explain the implausible shrinking of Transformers a fairly odd thing considering the franchise has as much relation to real science as a turnip does to the Manga Carta, so this leaves me rather cold.

But what is fun is how full of himself the Ore 13 powered Megatron is, telling Koska (who literally can’t care) he has “The unprecedented honour of wielding the galaxy’s greatest weapon!”

There’s no believe like self-belief and that Megatron is starting to go a bit peculiar with this new fuel source is going to be a key plot thread going forward. He’ll have so many personalities over the IDW run, it’s easy to lose track of the fact this is already very different from the taciturn holds humans beneath his contempt guy we met in Infiltration.

With an oil pipeline destroyed and Blitzwing ordered to turn invisible (a meshing of two Brosnan Bond films, like the Vanquish, an invisible Blitzwing is pretty pointless in a snowy environment where he leaves tracks), it’s time to visit Ark-19, where Prime is both being sensible and ridiculous. 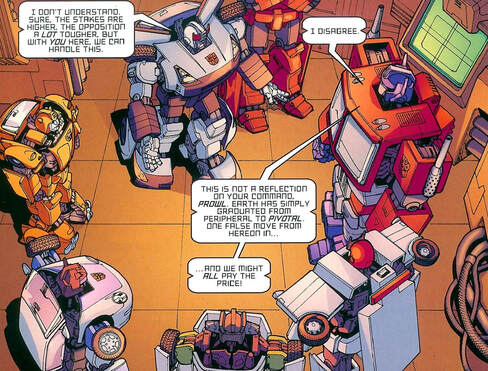 Prowl: Prime's biatch.
Sensible, in that, with Prowl’s unit having lost a trooper and unknown threats everywhere, Prime decides to call in extra reinforcements. Something Prowl is upset by as he feels it undermines his command, but he’s told to suck it up. Which I love as a reminder this is just a lowly crew that have accidentally stumbled into something much bigger than actually important characters.

Prime’s second choice is much poorer though, refusing Ironhide’s request to investigate Sunstreaker’s disappearance. Which is apparently so out of line it pisses of Prowl as well. But it makes complete sense as the only lead on a new and dangerous foe, and what is the point of bringing in reinforcements if not to let them spread their resources? It’s especially galling as all Prime has for Ironhide to do is monitor things.

It’s an incredibly fake way of creating some drama and conflict that doesn’t hold much weight and most of what follows would be exactly the same if Prime had given the OK. Not a great start to the Ironhide Investigates storyline that will become quite famous for not ending.

Back in Brasnya, I must admit I started to get a little confused as to who is who. But simply, the Soviets arrive and investigate their pipeline and are attacked by the rebels (who have either all been replaced or have no questions about their leader waving a monologuing super Walther about). Then the Brasnyan government troops turn up and are attacked buy the “Soviet” Blitzwing. Creating tension that, with the efforts of other facsimiles within the different governments, will lead to a bigger destabilising war. 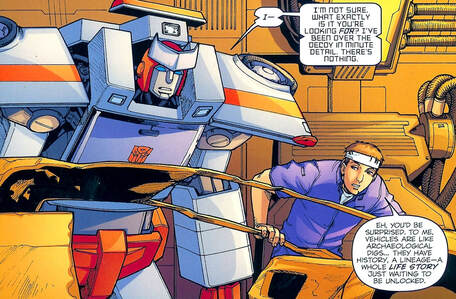 Dude works in a Quick-Fit.
This definitely did not need three different faction of almost identical human soldiers and would have been much simpler if it had been one group of Brasnyans Vs Soviets.

Intercut with all this is some detective work back at the Ark. First, Jimmy, is a rare and possibly unique example of him doing something only he could do, has worked out the Sunstreaker shell is made out of a pretty rare car alloy that would be easy to trace with the Autobots resources. But dare Ratchet disobey orders again? Especially with a camera behind him making ominous “I am watching you” noises?

In the command room, Prime, Jazz and Prowl are watching the international situation and work out from a satellite image that the Decepticons are behind Brasnya because Optimus would recognise Megatron’s discharge anywhere. 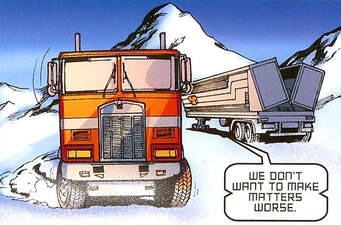 Watch that trailer.
It’s ambiguous (as Prime has seen mass displacement before, but not in a long time and with no clear context), but from Prowl’s “Crazy as it sounds, we think this is Megatron”, it seems this is the first ever time he’s a handgun, something that will later be retconned in quite a funny way.

So, the plan becomes to orbital bounce in (oddly without taking on new alt modes despite wanting to try and be secretive), capture Koska and use his McGuffin genes to uncover all the facsimiles on Earth.

And when they arrive in Brasnya (alongside some nice comedy of Jazz having to be ordered to put his tire studs on) there’s a lovely sequence of visual storytelling from Su of Prime’s trailer beaming in after and opening up in the background, easy enough to miss, but vital for the next issue. 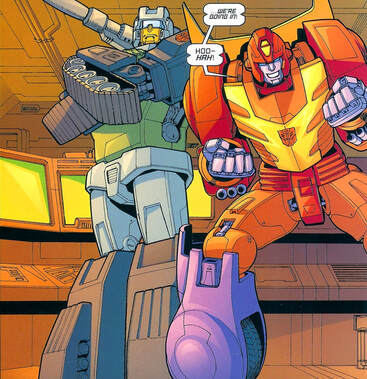 He's going in.
Why he might need some backup is apparent from the invisible Blitzwing spotting him and (clearly excited, in keeping with the “This isn’t an important planet” theme he may not have seen Optimus Prime before), calls in for permission from Megatron to take the shot.

Oh Blitzwing, no spoilers for next issue, but you should have just fired mate.

Getting permission (and Megatron ordering Skywarp and Astrotrain to deal with any other Autobots) forms a fairly mild three-pronged cliff-hanger alongside Ark-32 arriving in orbit with Nightbeat, Hardhead and Hot Rod aboard (and Hot Rod not caring about their hang back orders, he wants in on the action. It’s amusing in retrospect that Nightbeat is his boss) and Ratchet and the humans working out the Sunstreaker shell could only have come from one of three garages...

Leading Ironhide to come out of the shadows (why are the lights all off?) and ask if they’re thinking of going anywhere... without him.

An issue of mixed fortunes this one as it’s mainly about moving pieces into place for the big signature moment of this miniseries in the next issue. The art is great, and Megatron being so completely in love with himself is hilarious. There’s also lots of nice little character moments, including for, of all people, Jimmy. 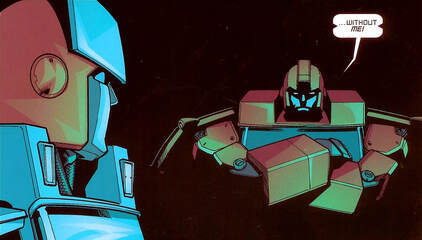 Ironhide watches you in the dark.
But the politics are needlessly complicated and hard to care about whilst bordering on bad taste. It also seems a lot of effort considering Megatron could just replace the sitting American and Soviet leaders and have them go at it without all the faffing about build-up.

Still, even if you can feel the plot wheels turning, it’s still enjoyable and my memory is that it leads to some iconic moments in the next issue.

How that holds up we’ll see next week. Or is it the case that in Soviet Russia, the memory cheats you? 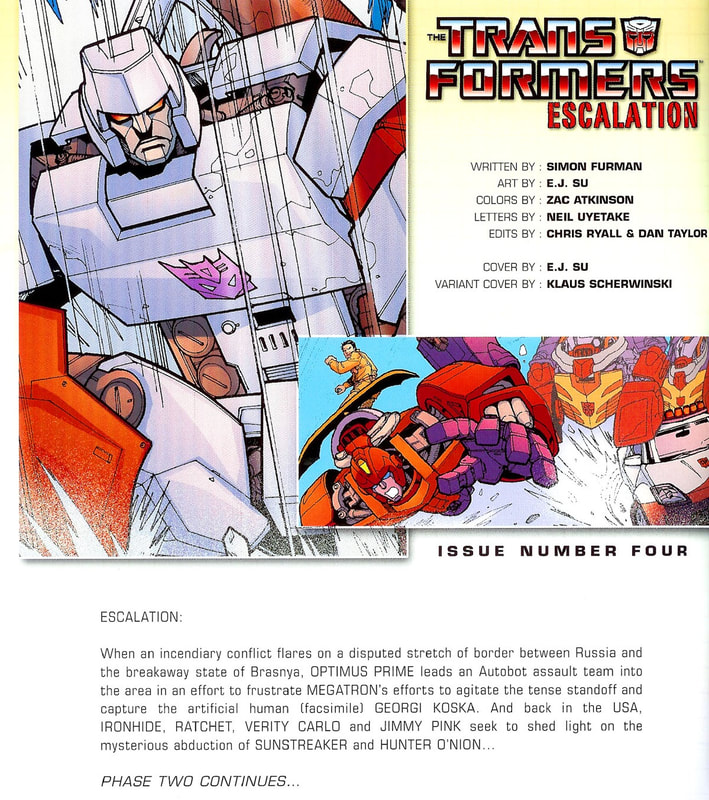