Nab Him, Jab Him, Tab Him, Grab Him, Stop That Pigeon Now. 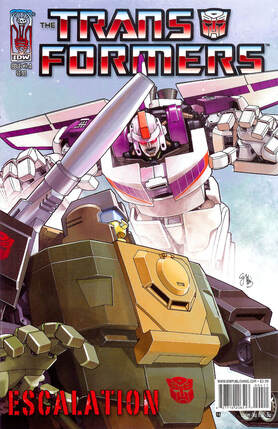 We appear to have an American F-22 Raptor being shot at by some kind of rally vehicle. And a police patrol car, also American... under attack from a space shuttle?

Some housekeeping first, for the entire month of June and in support of all my LGBTQ+ friends, all of my share of the profits from the Transformation books will go to Stonewall. Along with an equal amount, plus a £100 top up from me. You can find where to buy HERE (though I do get more direct money from Lulu over Amazon), so there’s no better month to buy and help an important charity.

For the comic itself, I must admit my memory had cheated me as I could have sworn this was the issue of Escalation with the big iconic fight scene of the series in it. Instead, it ends just before that, but that doesn’t mean there’s not a lot of very interesting stuff here.

Including opening on the reveal Hunter is alive, but strapped to a hospital gurney, confused and with no idea as to what’s going on as some doctors begin to prep him for surgery. The X-Files imagery is of course unmistakable, but works because of the irony of UFO mythology nut Hunter getting a taste of the nastier side of what he’s been chasing all his life. 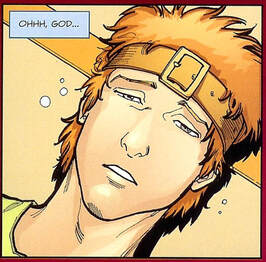 Hunter's Rambo look was not a success.
Then we switch to a rarity from E.J. Su. It’s quite common for Transformers artists to fill their work with little gags and in-jokes, but he more normally avoids that. But for whatever reason, this issue has several. Beginning with the garage in Fort Wayne, Indiana, that Team Verity have pulled up to being called Idea and Design Works Custom Wheels.

Maybe someone was sick of being asked what IDW stood for (not a lot). But the issue also has Binaltech Air filters; Seibertron car magazines and a random banner with the 07/04/07 release date of the film across it (this issue also came with a preview of the movie prequel comic, so we are definitely into the exciting built up phase here).

It’s not completely clear if they’ve already been to both the other garages, but they’ve definitely hit pay dirt this time as Ironhide can detect the place is chock full of super sensors and shielding. Including protection that makes it impossible to send a holo-avatar in (hey, like the protective equipment in the secret lab at Mo Zarak’s place. What a coincidence). Leading to the humans once more taking the risk, with Verity getting to give one of her speeches about it not being too dangerous, especially as she (understandably, though we already know she’s wrong) thinks Sunstreaker was the sole target for the kidnapping and they need to get a move on before Hunter is dumped in a ditch somewhere. 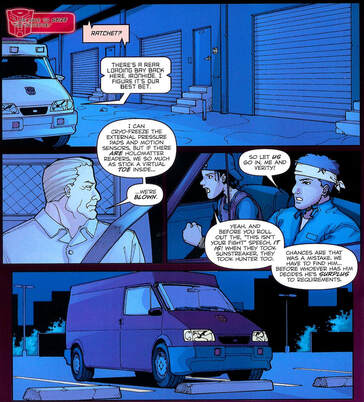 The logic here is so close to making sense.
Instead of moving forwards though, things move back three hours to the end of the previous issue’s Brasnyan action. Which is a bit odd structurally as there’s no particular reason for the A and B plots to be out of sync, suggesting a last second caption as someone realised there was no chance Ironhide and Ratchet could take a road trip to at least one garage in the time it took Prime to drive three feet.

As he repeats the importance of capturing Koska alive—handy for new readers but showing a lack of faith in his troops as within this timeframe, it’s about a minute since he last explained this—Blitzwing takes his shot...

And is blasted to hell by, gloriously, Roller. With Prime barely even noticing as he keeps on giving orders. I think the last (and only) time Roller appeared in a Western comic was in Plague of Insecticons way back in the 1986 Annual. This one goes one better by showing in the background the first (again, as far as I can recall) ever comic appearance of Prime’s trailer in full Combat Deck mode.

Not only is this an incredibly cool moment for Prime, it—and Jazz’ “Watchin’ your own back” line that emphasises the link between Prime and his components (that again, last appeared in an Annual two decades earlier)—is vital and casual setup for how Prime is going to get out of the predicament he’ll find himself in next issue. 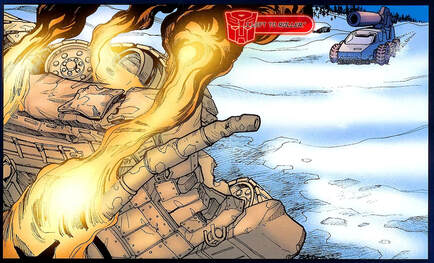 Living up to his namesake we'll meet in a few years.
Megatron decides to just have Koska fire him at Prime, but an Autobot intervention blows up the jeep they’re in, with Prowl ordering suppressing fire to keep Megatron in gun mode as they grab the facsimile.

Which is probably the last good call the other Autobots make in the issue as Skywarp and Astrotrain arriving starts a Stop the Pigeon style chase amidst massive explosions as they try to grab and preserve Koska before he can follow through on his last order from Megatron, to self-destruct. Will the newly beamed in Hardhead and the just jumping straight into the fight Hot Rod be a help, or a hindrance? 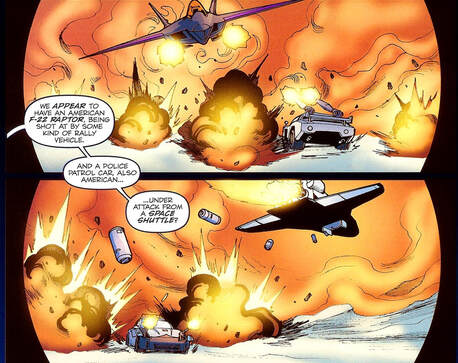 They may have given themselves away.
Three hours later, things get somewhat contrived as it turns out for all their advanced Cybertronian beating technology, Machination security is terrible. There’s a hidden door in the auto-shop that’s so badly hidden Verity can see the join, and all it takes is a penknife to force it open. Effectively, ordinary burglars could have found their way into the secret room that Jimmy cheerfully lets Verity go into first. A decent Yale lock and an alarm on this door would have been much handier than what we’re about to see.

Which is nothing compared to what the Brasnyan troops are seeing three hours earlier, as the Captain is confronted by the sight of a police car fighting the space shuttle (the only vehicle now more anachronistic that the still mentioned Soviets). Which is a brilliant and hilarious sequence that also sells how Megatron going off on Ore 13 has completely changed the keep things undercover and secretive idea the Decepticons have previously worked to.

Having had enough of fighting the one space shuttle you can’t make explode easily, Prowl decides to do something that the later, Flanderised, version of the character would have a heart attack over. A mad, impulsive dash straight into enemy fire so as to grab Koska, something even Jazz thinks is a crazy idea. 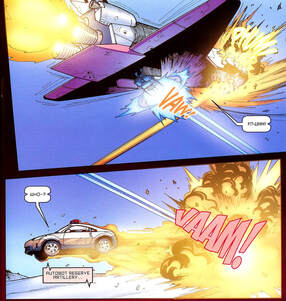 Saved by having a hard head.
And it would have been a lethal idea as well, if Hardhead hadn’t appeared to rather brutally take out Astrotrain (Su is definitely enjoying inflicting a lot of visceral damage on the characters). But it’s swings and roundabouts as Prowl is them thwarted in reaching Koska by Hot Rod blithely crashing into him as he tries to do the same. Paving the way for their future relationship and a smart call-back to the 86 film without actively repeating the “No you don’t Megatron” moment in an obvious rehash.

There’s an odd reaction from the Brasnyans (no Soviets actually appear this issue), where the Captain doesn’t seem that surprised by there now being giant robots on the playing field, instead refusing to explain to his troops what he can see (even though they’re not that far from the battle they apparently can’t see robots without binoculars?) and trying to call a specific Major using a sinister sounding “Alpha-Nine-Nine” code. Implying this small breakaway state that doesn’t even now the Soviet Union ended nearly two decades earlier has some sort of awareness of and procedures for dealing with aliens. 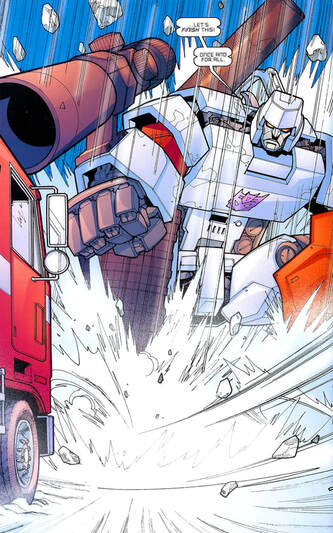 Su sells the landing.
Or it’s just meant to be a shocked call in for more troops and the art and dialogue make it seem a bit too casual. Either way, he’s not getting his backup as Megatron transforming to robot mode somehow takes out all local communication (I wonder why going the other way didn’t have the same effect last issue?) and he’s very excited to see Prime again. Like the ex you know you shouldn’t have sent that text to, he’s really into the idea of “Combat” between them after so long, and we get an amazing full page spread of him confronting Optimus that really should have been the cliff-hanger.

Instead, three hours later, there’s an incredibly awkward scene of Very and Jimmy going into a secret cellar full of car shells suggesting the Machination were ready to grab any Autobot (therefore it’s amazing the Autobots found the place as their online search last issue was based on locating a dealer that had only brought in a small amount of the special alloy) and begin a mildly rubbish search.

Verity finds an otherwise blank M business card that, though it’s not completely clear, seems to be sat atop a small sensor and this is finally what sets off the alarm, filling the room with gas and starting a ten minute countdown that ends the issue.

Now, not to jump ahead, but it’ll turn out to just be knockout gas, even though the countdown is for the auto-destruct. So why not pump the place full of poisonous gas if the plan is to kill anyone who moves the card? Why not blow up the place immediately? It’s a Dr Evil level contrived death trap that seems to have been designed to give the intended victims a sporting chance to escape if they have support on the outside that could come in and rescue them. 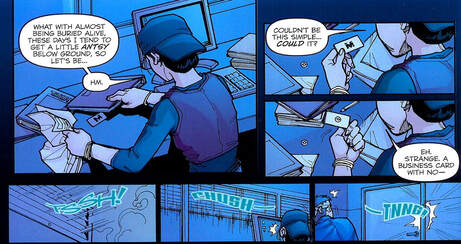 Your guess is as good as mine tbh.
It’s a shame the issue decides to end on the less successful of the two plots as the Brasnya stuff is huge fun, with some strong and smart writing from Furman and Su effortlessly switching from the more “Realistic” approach the IDWverse began with to the almost Michael Bay level ridiculous action here. Even with silly death traps, it’s probably the strongest individual issue of one of the miniseries to date.

But things can only get even stronger as next week it’s a Spotlight that can only be described as superior. 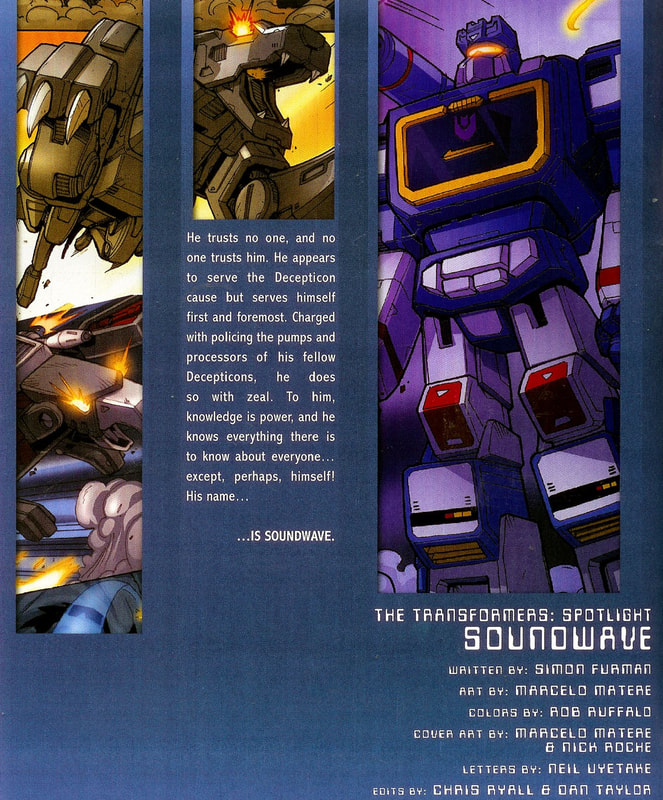