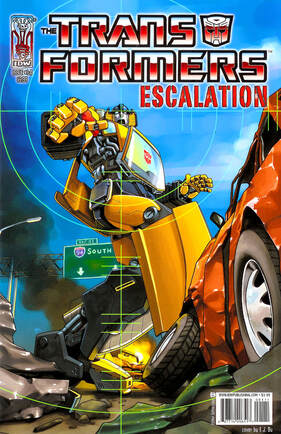 I mean... I never even knew the smile was freakin’ people out!

So, after various sidesteps and diversions we return to what is technically, though perhaps not actually, the main thrust of the IDWverse with the second in the ...tion series. My memory is that Escalation is the best run of this era, hitting a head of steam before outside forces started to affect the end of the follow-up in detrimental ways.

How well that memory will stand up is immediately called into question by the opening. Which starts fine, using a framing device Furman has adopted many times (such as Infiltration 4), where the start and the end of an issue mirror each other.

Here, as we get a POV shot of a car being targeted, fired at and exploded by a very big gun as a voiceover describes “This is how it goes down...”, before going into isolating the target on an open road before immobilising it. And then “One less alien mech”. 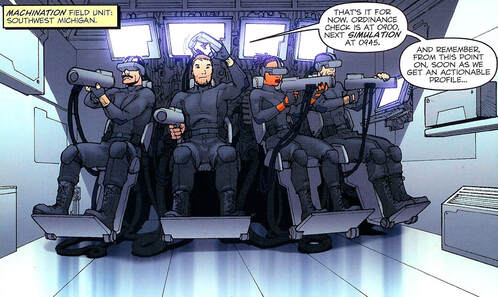 VR.5.
Which is a decent tease, until it turns out it’s all a VR simulation in the “Machination Field Unit” (which is a Breaking Bad style campervan), where Agent Drake and his team have been playing in a very 90’s looking setup that’s faintly ridiculous in 2006. It also has them sat down, but using prop guns, so I’m not sure how that works in relation to their physical movements when acting out the exercise.

Nor am I sure why they have to give over a huge amount of their field headquarters to a VR room when they could have just practiced this shell game before leaving. Though it is lucky they bought some entertainment as they’ve been waiting by Lake Michigan (according to the Wiki, everyone’s movements around the lake in this issue make no sense geographically, but as I don’t know the area, I’ll take their word for it) for days with no sign of so much as an “Extraterrestrial hubcap” for days.

The addition of a bit of time between series just seems to be because Furman realised there’s not really been any chance for the Autobots and the humans (both sides having known each other for hours, maybe a day or two as far as Ratchet goes) to become as close as the next scene needs them to be. Because otherwise most of what follows would make more sense if we were in the immediate aftermath of Infiltration. 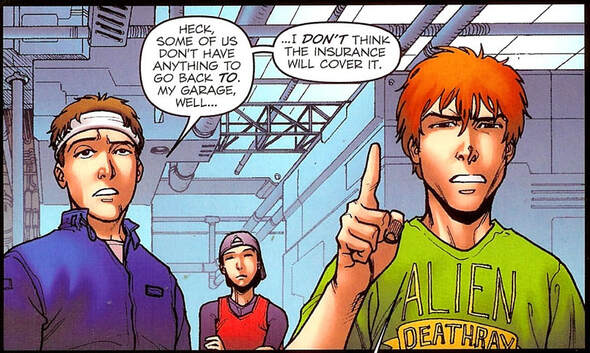 *Boris Johnson pointing meme*
The reason the Autobots and the humans need to have become close is that it’s time to say goodbye. Despite Hunter’s hope that they might become “Honorary Autobots” (both a dig at the Armada cartoon and foreshadowing of his own fate!), Prowl has decided the humans need to go home. Something Ratchet can’t really argue against as, with the palm computer having given up its secrets, there’s no longer any threat to the kids.

Oddly Hunter and Jimmy are deeply upset up this, even though their lives have been nothing but death and disaster since meeting Ratchet. Jimmy even points out he has nothing to go back to thanks to the destruction of his garage (and that the insurance probably won’t cover it), without seeming to realise that having buildings explode around him is exactly the sort of thing that makes getting out now a very good idea.

Verity, though still using sarcasm to hide her abandonment issues, is the only one to take a pragmatic approach, simply snarkily going “I’ve not been wanted anywhere, by anyone, since I started crawling” and storming off. Whilst Ratchet, Jazz and Ironhide look very sad.

Jazz and Ironhide have basically had no interaction with the humans, so the level of their concern has to be down to something amazing having happened in that gap of days. 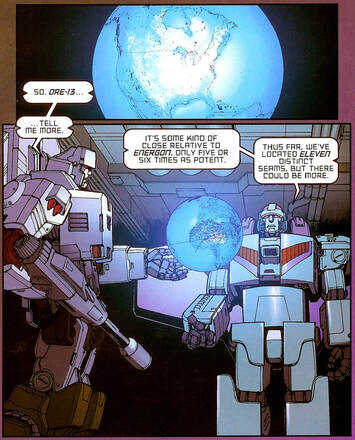 "But it sounds like an ore"
What hasn’t happened in the time between series is anything at the Decepticon base, as Megatron is only now going full T-Bird by asking Astrotrain to “Tell me more” about Ore-13 in a scene that is mainly to bring any new readers (or ones that haven’t read Spotlight: Shockwave as Megatron wonders if Earth has had a mysterious helping hand in the past) up to speed about everyone’s reason for being interested in the planet. It also leaves Megatron a little more impressed with Starscream than he had been previously.

Back at the Ark, there’s a very strange gag of Verity playing a Sunstreaker themed arcade game where he races and battles Runabout and Runamuck. I’m assuming the parallel to the opening VR fight is intentional, but I’m not sure what it’s meant to be saying. And whilst it’s amusing of Verity to point out the ego in creating a computer game around yourself, I’m not sure why Sunstreaker did when subsequent scenes are going to make it very clear he really doesn’t like the humans.

A connection between Autobots and humans that makes more sense is established with Jazz, who comes into their room in holomatter form to thank them for all their tips on Earth culture and especially for pointing out his holo-smile needed work.

Now, if all the humans have been doing the last few days is playing Grand Theft Autobot and giving grinning lessons, Prowl really does have a point about it being time to get rid of them. 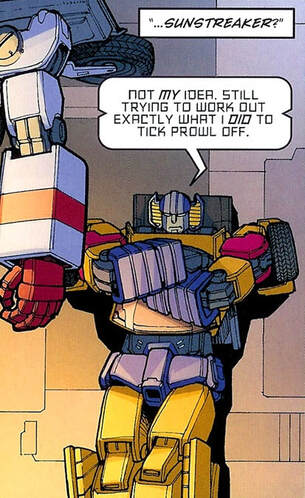 I sense an odd couple comedy coming.
And that time has come. Ratchet hasn’t been allowed to take the journey himself as a minor punishment for his own rule breaking, so Ironhide will be taking Jimmy and Verity, whilst Sunstreaker gives Hunter a ride.

And Sunstreaker emphatically hates the idea because he really, really doesn’t like humans.

Let’s hope nothing ironic happens to him.

Of course, the big thing at the end of Infiltration was the arrival of Optimus Prime to take charge. Something that may have had some of its anticipation robbed from up by his heavy involvement in Stormbringer, but we now finally, a good chunk into the issue, get to see what exciting thing he’s up to...

Yes, Optimus has really mastered working from home as he sits and listens to multiple messages, largely setting up other stories (so Ultra Magnus is talking about having found someone “Up to his old tricks”, which will turn out to be a reference to his own Spotlight). Though the important one is Jetfire passing on more info about what he found in Bludgeon’s files, allowing Optimus to explain to Prowl they weren’t the first Cybertronians on Earth, again bringing readers who haven’t read the other books up to speed (and adding that Soundwave has also been mucking about on the planet). 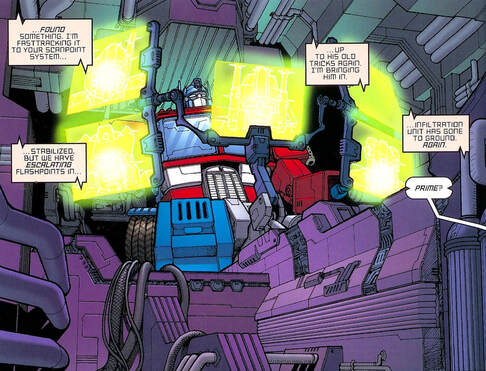 Time to return to the office Prime.
The deftest detail though is, after Prowl has been getting all the flak for it, it was Optimus who ordered the humans gone because forming attachments is a bad idea.

Especially if they have to sacrifice the planet.

This firmer and more military streak to Prime is far more appealing than indecisive brooding Prime, and of course sets up a fairly obvious character arc for him that won’t quite pay-off with the plot fudging to come.

The Machination are thankfully spared having to play another game of Madden NFL 07 (which I don’t need to tell you was the bestselling console game of 2006 in the US), as their targets finally drive out of the lake. With it being a nice touch that, out of Ironhide and Sunstreaker, Drake goes for the sports car as the one to take down.

Probably the only nice touch about the character ever.

The humans are incredibly depressed about being driven away from Certain Death, with Hunter not helped by Sunstreaker moaning about how much he hates having a creature that sheds skin sitting within him. 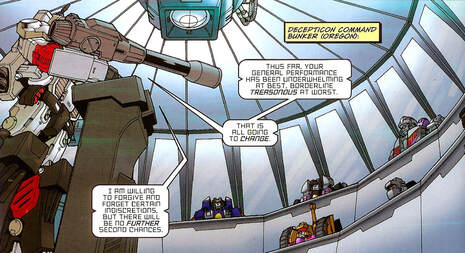 Can't believe Megatron missed a chance to read some poetry.
Back at the Oregon bunker, we learn the real difference between the two leaders as it turns out Megatron is the sort of boss who’ll demand you come back into the office after the pandemic, calling a meeting of Starscream’s team in their nice meeting room. Where (as he did at the end of Infiltration, this is again bringing new readers up to speed) lays down the law about how they’ve had their one moment of forgiveness and there will be no second chances.

He also actually compliments Starscream for having laid the ground for their plans so well, whatever his other flaws, and then very dramatically orders Astrotrain to “Activate the facsimiles!”.

Which, once you know where that plotline is going (or rather won’t go), is absolutely hilarious.

Back on the road, the trap is sprung as the campervan and Mobile 2 (a truck, the implication being they had one ready for each Autobot they knew of, depending on who showed up out the lake first) come at the Autobots from each end and create a diversion by launching little Roller type drones that cause a massive car crash by firing missiles at the traffic. With clearly a lot of human death.

This leaves the two Autobots separated by a sudden traffic jam, something Ironhide doesn’t like. So, before he’s even confirmed it’s not an accident, he creates space to pull out by ramming forwards and backwards, clearly killing everyone in the cars either side. 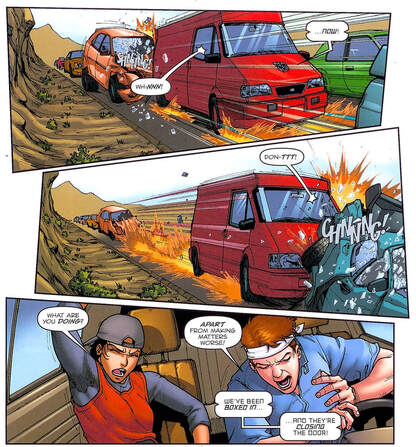 No one tell Jazz that Ironhide got away with this.
Bloody hell Ironhide.

Amusingly, if Ironhide is being too much of a bastard, it’s Hunter not preparing to be enough of one that dooms him. As a smokescreen is released from the campervan and armed, and ridiculous looking in battle suits, humans emerge, Sunstreaker goes to fire his roof missiles, but Hunter stops him because there are still civilians in the area. Which is rather making an assumption about the advanced alien robots aiming skills, and the delay costs them as it allows the Machination guys to fire stun bolts at the car.

Way to go Hunter, all your future pain and misery comes from that mistake.

Amid the confusion and chaos, we then get a repeat of the “This is how it goes down...” narration as the destruction of a car by a big gun is played out for real this time, with Sunstreaker seemingly being destroyed.

Though the “One less alien mech” line isn’t repeated, which is suggestive.

Which means the issue ends on Ironhide, Jimmy and Verity looking on in horror at the smouldering wreck. A moment of drama possibly undone for Dreamwave readers who may remember this is a more elaborate rehash of a cliff-hanger from Furman’s Energon comic, where Alexis got into a taxi that then exploded (SPOILER: She was fine after).

After a variety of issues that have been better than I remembered, that was the first that really came in below what I recalled it being. 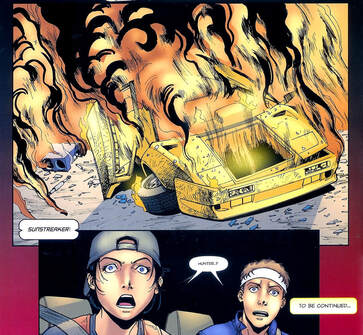 Alexis!
The angst about saying goodbye to the humans doesn’t really work when so much of the relationships depend on things we never saw (not helped by Bumblebee, who did spend time with the humans on page, being entirely absent) and the Machination just aren’t very interesting.

Having a gap between series where nothing has happened doesn’t help either, that all sides have apparently spent the time playing computer games (or in Prime’s case, checking his email) definitely robs the series of any pace and it’s ridiculous some of the conversations we see, especially amongst the Decepticons, are only happening now.

The main selling point remains the art, with E.J. continuing to do great work. The final trap is very carefully laid out so it all makes visual sense despite the potential for confusion amidst the smoke and deliberate misdirection, and it continues to be a visually stunning series.

But overall, it feels like a few steps back from where we ended Infiltration.

Which leaves the question of whether next week and the second issue will pick up the slack once more. 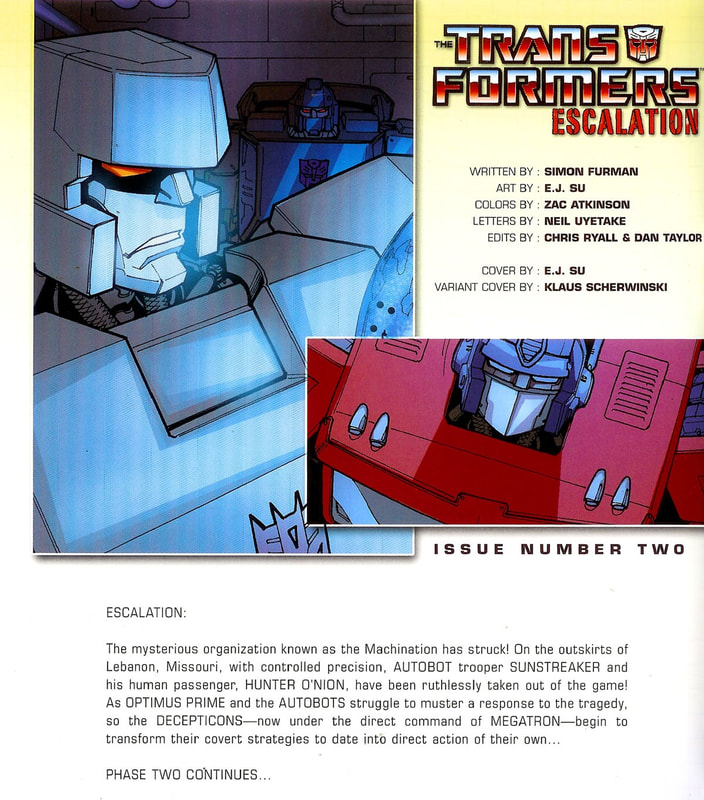