Slowly Walking Down the Hall, Faster Than a Cannon Ball. 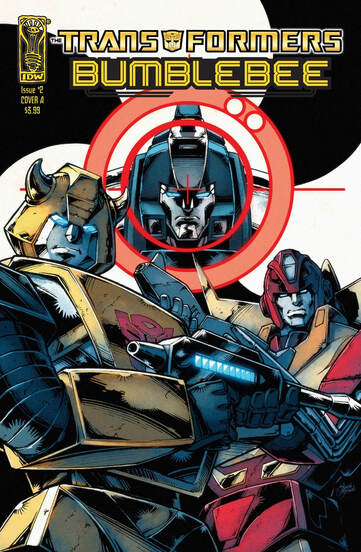 Hurrah for… ah, Blaster. Who made us that excellent energon soup tonight. Well done, Blaster. Thank you.

After we started with some odd continuity between the two books running at the moment, no one can accuse this second issue of Bumblebee hitting the ground running with a direct link from the preceding Costa issue, as we open with Blurr on the run after the Skywatch attack, calling to Hot Rod for help.

Well, it would be seamless if not for the fact that there, Blurr had an Earth mode and here he’s in his coming to a toy store near you soon in 2022 Spotlight design. Very sloppy.

Even worse is how he talks. Whether comics try to repeat his fast TV speech patterns has always depended on the author (in the Marvel days, Budiansky didn’t, Furman did), but this is I think a first, where the same writer has Blurr talking like a normal person on the first page and suddenly switching to TV all words together style for the rest, all in the same issue.

Perhaps Bumblebee also having a different design from the ongoing shocked him into going hyper, as ‘Bee standing in the middle of the road with his hand out is definitely something he wasn’t expecting. Skywatch’s ability to detect Transformers anywhere really is amazing. 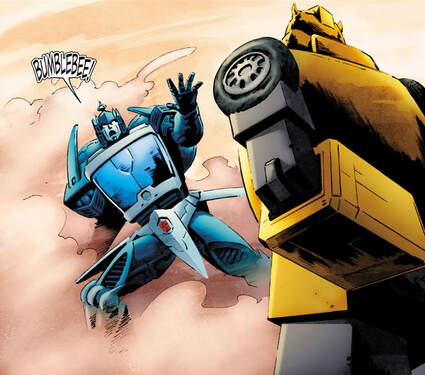 "Why do we look different?"
Bumblebee is very apologetic and friendly but has to tell Blurr they’re bringing him in for the same humans (well, as far as Bumblebee knows) that Blurr has just escaped from for… well, the reasons weren’t that convincing last month. And Blurr, understandably, freaks out about being taken and turned into ballpoint pens, and so shoots Bumblebee in the chest.

Getting an assassination attempt from his own side so soon really does make it seem like Bumblebee may be the worst Autobot leader of all time.

Luckily, it turns out Bumblebee’s Skywatch blast (somehow) took the hit like a World War I cigarette case, and Blurr can be led off by the surrounding Autobots, moaning all the way.

What is clear from both Blurr’s reaction to the Skywatch badge and it deflecting a shot dead centre of his chest, is that the art is at odds with the writing. The badge is clearly meant to be covering Bumblebee’s Autobot logo—and presumably doing the same for the others—rather than being a smaller higher up thing.

Now, maybe Chee got this wrong from misreading the script, maybe someone felt if they had the badges be less overt them being completely absent from the surrounding issues of the Costa series wouldn’t stand out so much. Either way, a competent editor would have caught this and simply had the dialogue about the badge covering the brand changed, at the very bare minimum. 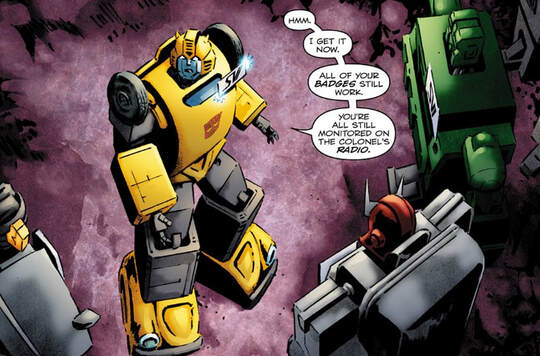 Brains of Britain here.
In their own base, an ally trying to kill him has Bumblebee decide this whole deal is getting worse all the time, so he’s not going to hand Blurr over to Horiuchi. Because that sort of thing is only good enough for Decepticons.

This makes the Colonel decide to give Bumblebee a taste of being force transformed, only for it not to work because of the previous damage to the badge. At least until Ratchet very unsubtly nudges his leader into pretending it has, going into Beetle mode and acting like the real malfunction is the punishment won’t turn off.

Somehow, the humans fall for this, saying they’ll come over tomorrow to fix it, and for now, Ratchet is in charge. Which frankly could only be an improvement.

With these masters of deception having gotten away with it for now, a returned to robot mode Bumblebee is surprised when no will talk to him, until he realises that, as their badges are all working, they can’t say anything without being heard, but he can talk to them without being heard because microphones are a science beyond the understanding of Zander Cannon. This realisation and deciding that they need a Volkswagen that looks like him to act as a decoy, somehow makes Ratchet decide he’s doing a good job.

An odd, albeit nicely surreal, page then follows of Skywarp, in a comfortable blanket, sat on a roof and using a satellite to send out a message to Megatron, telling him of the wonderful weapons he’s collected and just how gosh darn much he loves the guy. It’s borderline poetry and not very Skywarp (who is more the dumb goon in the rest of IDW1 than the waxing lyrical one), but actually quite fun. 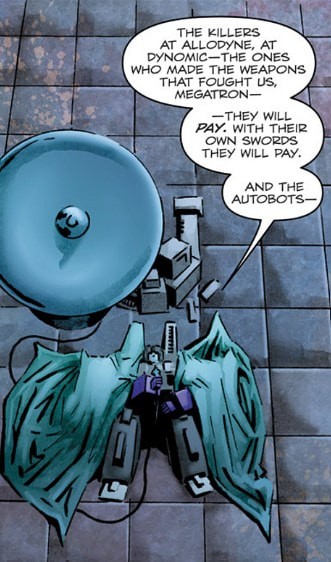 Who doesn't have a special blankey?
We then get three pages, two of Blurr racing the city to find a yellow Beetle (and eventually succeeding), sandwiched by a quick flashback to Bumblebee persuading him by…err… saying they’re friends and teammates and Blurr owes him one because of the shooting to kill thing.

Which feels like two mutually exclusive ideas, but Blurr using his powers in a plot way and the idea of having to go round every parking lot in a wide area to find one relatively obscure old car is actually very nicely done.

More so than Bumblebee’s speech to the Autobots about how, yeah he fucked up getting them into this, but now he’s going off to find a solution, so they all need to stay there and silent. With him dramatically removing his own Skywatch badge to reveal his Autobrand not working as a visual because the Skywatch badge is not covering his Autobrand.

Somehow, this gets a cheer, which Ratchet, in another nice and sarcastic bit of humour, turns into a cheer for Blaster’s excellent energon soup.

The problem here is, the Autobots already know how to beat the badges. Get Blurr to shoot them. But rather than doing this for everyone, Bumblebee decides to go find the source. And after Wheeljack examines Bumblebee’s broken badge and invents texting, he’s able to point their leader at a shipyard where one of the main components of the “Radar cloak,” a substance called “Darmstadium” is being imported in. 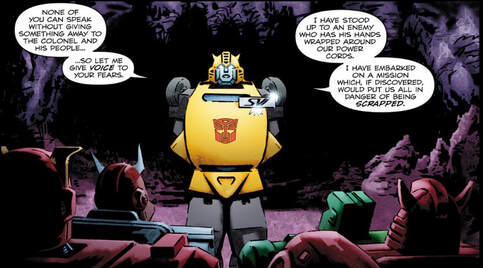 "It is all my fault, but I shall not be resigning"
Of course, as Bumblebee no longer has his radar cloak, why can’t Skywatch (either official or unofficial branches) spot him as soon as he’s on the road? Or Blurr for that matter? Or the about the appear Scavenger?

This whole trip to the shipyard is really a side-quest, to let Bumblebee spot a brown construction vehicle is really and obviously the Constructicon in a cunning disguise. And that this has successfully fooled people for years is a decent gag.

Scavenger is annoyed at the world and does not take kindly to Bumblebee pointing out that things aren’t great for the Autobots either, so maybe if they all teamed up, they could be friends with the humans.

Which, considering that Hot Rod trying the team-up thing is a main point of contention in the ongoing is a strange thing to introduce here, and makes for an odd cliff-hanger of Scavenger chasing Bumblebee off. 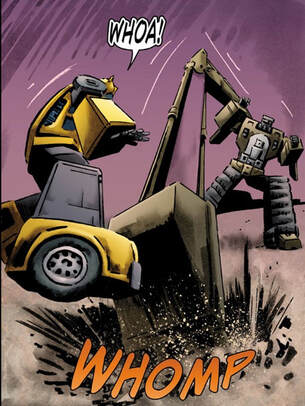 WHOMP
Odd is basically the whole issue, there’s some genuinely nice and even intentionally funny moments, but the “Fooled by Bumblebee’s acting” bit is painful and there’s a great feeling of keeping the wheels spinning in place to drag things out to four issues. Frankly, Skywarp and Ratchet get all the best bits, with the titular star being more an embarrassment in his own book, so disliked even his friends want to kill him.

Chee’s art, for all the odd character models and whatever misunderstanding messed up the pretty vital badges placement idea, continues to be very much to my taste, but it’s not really enough to elevate a book that is meandering. For the target audience of kids, this must have been very boring.

Boring is not something you can accuse next week’s early because it’s TFN weekend issue of being though. Seminal is probably closer to the mark, so come back on Thursday to Wreck and Rule.