I Don’t Want to go to Work no More. 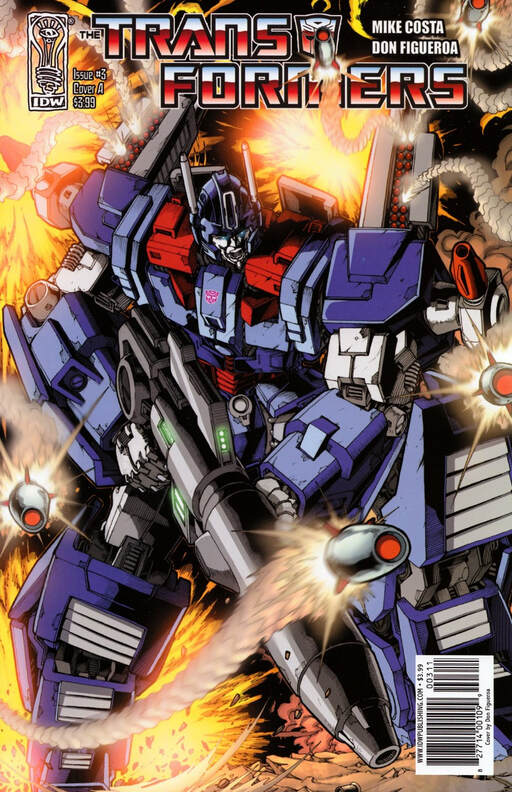 I’m not sure exactly what that particular idiom means, but it sounds like something I’d probably object to.


As with the previous issue, the title here is taken from a Brian Aldiss short story, but it perhaps shows how disconnected both Costa and IDW were from the actual Transformers fandom that it didn’t occur to anyone we’d see the title “A Rude Awakening” and not automatically think of the Dr Smoov YouTube video.

This is another story I’m not familiar with, so perhaps the title has some meaning that’s not apparent, but it’s fair to say it’s hard to read this and work out who is being rudely awoken.

Unless it’s Jetfire, who’s sitting in a hanger and feeling incredibly depressed (and drunk on fuel barrels) about living in caves, trapped on a planet with terribly slow communications. Now, a Transformer dealing with chronic depression about being stuck on Earth is a decent idea, though explorer and scientist Jetfire feels an odd choice for it, he’d more likely love being stuck in a cave studying Earth and its curious Shockwave related history. I also don’t remember anything Jetfire did in this series, so it’ll be interesting to see how this develops.

Unless the reason I don’t remember is because it goes nowhere. 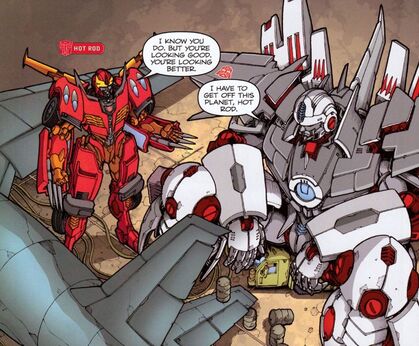 Same, mate.
Hot Rod, having failed with Omega Supreme (maybe he should try again now that the big guy is also stuck in a cave), is now turning the charm fully on the depressed Jetfire, trying to convince him to help him both rescue their captured colleagues and get off the planet now they don’t have a spaceship. Oh, and meet their new friends, the Decepticons.

So, what happened to the idea in Bumblebee that Skywatch can detect any Transformer who’s above ground? There’s a whole bunch sat in and around this hanger, not moving.

Back in the caves, and before the first issue of that miniseries (as was released last month) and after the still to be released first issue of Last Stand of the Wreckers, Magnus is holding court, saying no one has anything to worry about as he investigates Prime’s “Defection” (or as Bumblebee insists, “Surrender”). And there’s actually quite a nice bit as he attempts to use Earth slang he’s downloaded to fit in with the acclimatised local Autobots, completely baffling them in the process. It feels like exactly the sort of thing that the later Magnus would try and fail at as well. 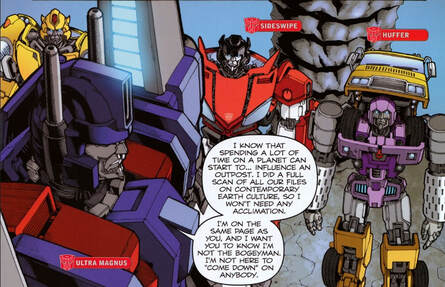 He is trying, bless him.
At the end though, he would like to see the baby.

Costa is at least trying to make the issue flow though, with scenes blending into each other. So here, we go from Magnus trying to use local idioms and asking where the body is, to Optimus in Skywatch jail, being confronted by Spike using the phrase “The guy who knows where all the bodies are buried” to describe him and deciding he doesn’t like it.

What follows is basically a nothing scene though, as Spike tries to have a conversation with Prime, even threatening him that it’s better to talk now than to wait for the General, only for the Autobot (who has apparently not put any thought into what happens now) to simply refuse to cooperate, and even welcoming whatever nastiness is coming his way. Giving us Spike’s first ever good line, “I’m being stonewalled by a talking truck with self-flagellation issues.” 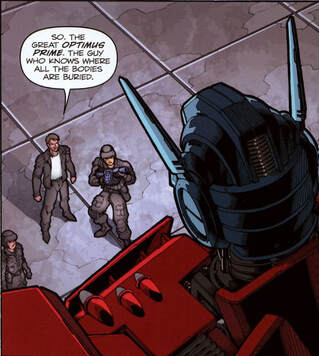 "The only body I buried was your mom. With my dick"
Less good is, when one of his men points out they don’t actually need to do anything but hand over Prime to General Witwicky, is Spike making it clear he wants more before Pops gets there because of his daddy issues.

Again, that’s why children do not serve directly under their parents in the military.

Meanwhile, Magnus has examined Ironhide and found nothing of interest because the body has been moved. He then becomes even more annoyed when he finds out the team leader on the mission actually has really defected. We even get a POV of Bumblebee through Magnus’ eyes, though after we had proto-Magnus vision with Omega Supreme last issue, it’s a shame we only get Bee’s name on his HUD. He makes his feelings clear though as he point-blank refuses to care about Bumblebee’s problems and goes to find Hot Rod instead.

But before he leaves, Bumblebee’s embarrassment is complete as another group of Autobots walk out—Tracks, Hoist, Beachcomber and the we already saw the aftermath of him leaving in the Bumblebee series Blurr—because whilst they weren’t convinced by Hot Rod before, they’ve no intention of being sent to sing-sing by Magnus.

No wonder Bumblebee had his head in his hands by the start of his own series. Magnus also pulls a face that makes it very clear he is thinking of arresting everyone, but for now decides to go focus on just Hot Rod, and the turned off transponders won’t slow him down.

Life's a beach.
What does slow down is the pacing on this comic, as we get a fully pointless page of Hot Rod talking to Jetfire about building a ship as the other Autobots are still unsure about this whole team-up thing.

What Spike is sure about is he needs more leverage and decides to send a team out to capture some Transformers. But rather than the ones standing stationary and having a chat, for some reason he put his people on the moving Hoist and co.

This take-down is the big action scene of the issue, and does have a couple of nice moments, such as Hoist still won’t let humans be hurt, plus a possibly unintentionally hilarious moment of Tracks, upon seeing Beachcomber become trapped in vehicle mode, screams “BEACH” at the top of his lungs.

But it’s also far to easy, with one human even being smug he took Beachcomber down with one inhibitor clad hand. They don’t even bring the mechs out. It adds to a general feeling of Autobot ineptness in the whole issue.

Inept is what Prime may be feeling as well, as Spike is able to confront him with three (as Blurr got away by just going fast) new prisoners, asking if he’ll like to talk now as surely he cares about these guys.

As Skywatch still has Autobot prisoners, the ones Hot Rod wants to rescue, I can only assume those are all people Prime doesn’t like. 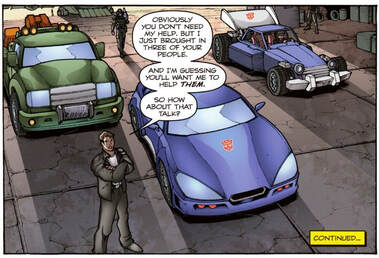 "Tracks? I hate that guy. Fuck him over!"
Maybe I’m succumbing to Stockholm Syndrome, but that did feel more like a step in the right direction. There’s some good lines and character moments, and for the first time in a while it’s an issue that feels like it has some thought put into the structure and how the story flows.

Plus, Don is starting to reign in some of his excessive movie-ness on the art, even if his Bumblebee looks to already be in a design that will dramatically be revealed in a few issues time in his own book.

But it’s also dragging its feet, especially with the drawing out of Prime refusing to talk and Hot Rod hanging around a warehouse giving pep talks.

It’s as adequate an issue as we’ve had from Costa yet though, if the upswing continues at this rate, we should be onto the gold by issue 50.

Next week, it’s all a bit of a Blurr for Bumblebee. 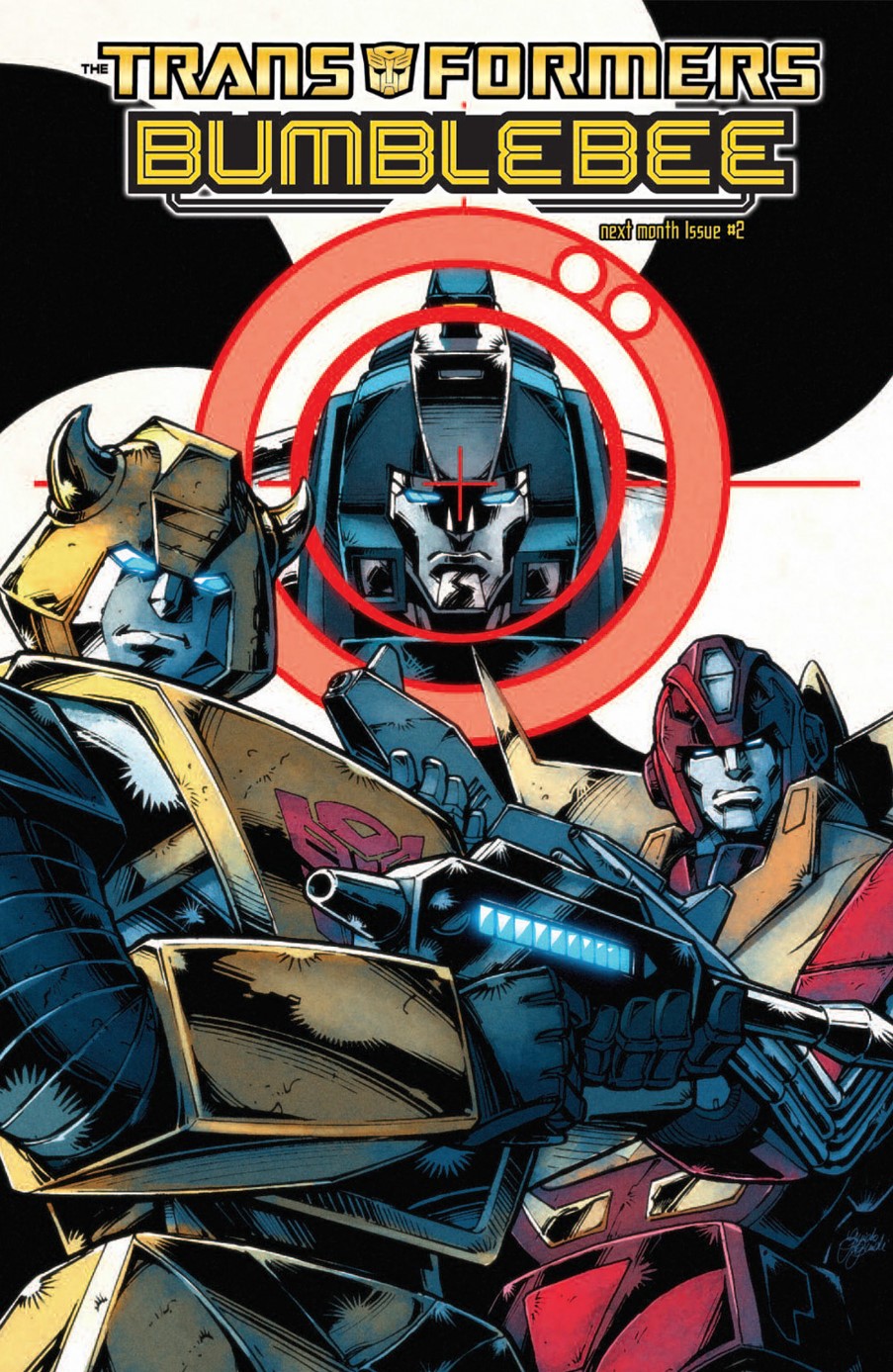