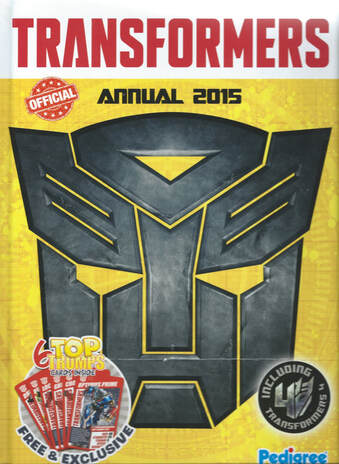 
Text Stories:
Age of Extinction.
The Dark of the Moon.
Revenge of the Fallen.
Arrival From Cybertron.


Meanwhile, at an industrial plant, the Savoy Strike assault team track down the Autobot Ratchet who has received an alarming message from Autobot leader, Optimus Prime.


Well, it’s been a while since we’ve done one of these. Three years after the last attempt, we get a brand new Annual. With an odd twist.

Though it is effectively the Age of Extinction book and all the content is Bay based, the cover gives as much prominence to this being a Top Trumps book and the exclusive push out playing cards that are included.

The advert in the back for other Annuals that year reveals that it’s not just Transformers, there was a distinct lack of faith in the format, with the various books split into three tiers.

Transformers naps a spot in the top line, alongside things like Pokemon, of having “Added value gifts”. Which is either face masks or Top Trumps.

The second tier is “Super interactive annuals with augmented reality features”. I’ve no idea, but it includes the likes of Angry Bird Star Wars and Temple Run.

The third and final row is “Bumper Annuals”. How dull. 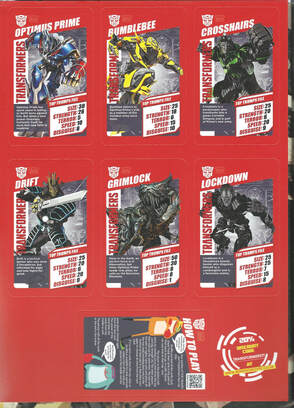 Exclusive cards!
For the record, the exclusive cards (I’m guessing for the art rather than the characters) are: Optimus Prime; Bumblebee; Crosshairs; Drift; Grimlock and Lockdown.

Now this had me expecting the Annual inside would be not terribly good, a quick and nasty bit of tat to stick the cards on. So it was actually a pleasant surprise.

First up, all the quiz and activity pages you’d expect are present and correct. But, are generally better written and more coherent than the last few books. There’s also an unexpectedly heavy presence from Ratchet, on the meet the Autobots page, with his own riddles and even a full profile (something Galvatron doesn’t get despite what the contents page says, Lockdown replaces him and is firmly Not A Decepticon).

Which makes me feel that someone is in pretty serious denial.

As is whoever insisted the Twins appear as well. Right to the end, I couldn't escape them.

The supplementary material also gives us one of a few places suggesting they were working from an early version of the script. With so little tie-in material to this one, we don’t get many nuggets of “Las Vegas rather than Mission City” or the original ending to Dark of the Moon, so this is like gold dust. 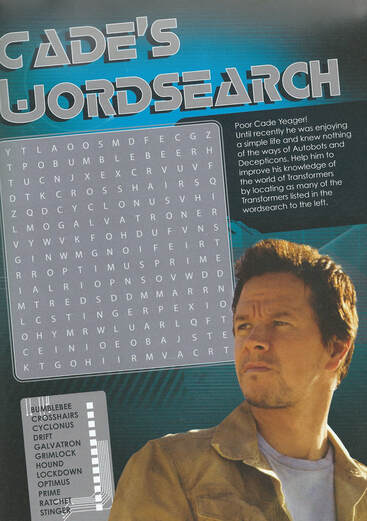 Poor Cade Yeager indeed.
Here, twice (once in a wordsearch, once in a true or false quiz), Cyclonus is treated as a Decepticon from the film. Colin on Twitter suggested the character now known as KSI Boss.

Unlike some of the others I’ll mention, the final name is the one that sounds like an early placeholder. As he didn’t get a toy till years later, I wonder if he was supposed to be called Cyclonus in the end, but the documentation with the abandoned name is what people saw and what wound up sticking?

The exciting thing is the prose retelling of the films though. Which, even though Pedigree have published all the previous movie Annuals, is all new text rather than reprints. And in reverse order for some reason. The first film being called Arrival From Cybertron confirms at least one big nerd worked on this, which might be why it’s stronger than it really should be (though Dark of the Moon does gain an extra The).

The older films get four pages a piece which are well written and succinct, but it’s the 8 pages given over to Age of Extinction that are most interesting.

The Wiki mentions that the Dinobots are referred to by different names (and there’s only four of them): Warpath (the T-rex); Spinosaurus; Triceratops and Swoop.

Of the various ultimate names featured, I think these were definitely just placeholders, mainly just being descriptors rather than names. Warpath I’d say was deliberate misdirection to go on emails and memos to try and keep Grimlock, and thus the Dinobots, being in the film a secret. 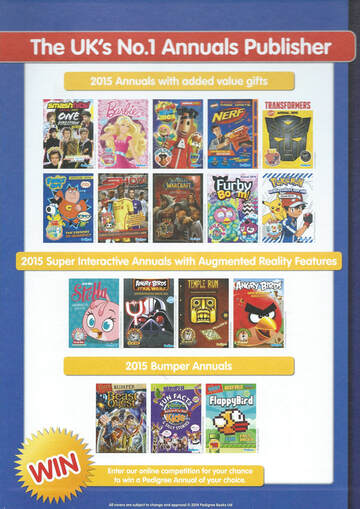 All Annuals are equal, some are more equal than others.
Sucks to be Warpath.

More interesting though, is that Cemetery Wind is called Savoy Strike (Attinger is called their team leader as well, but that’s probably a simplification for the length). Which feels reasonably authentic as a serious intended to be used name rather than something stuck in the script whilst they sorted out trademarks and ran focus groups on possible real names as the Dinobots (who are called by their correct names in the rest of the book by the way) do.

However seriously these names were intended to be used though, this means, right at the end, this project is still throwing up interesting little known nuggets. Which makes me feel like it’s a job well done.

But, speaking of little known nuggets, there’s one final comic to talk about before I... sign off.