Come on Baby, do the Locomotion. 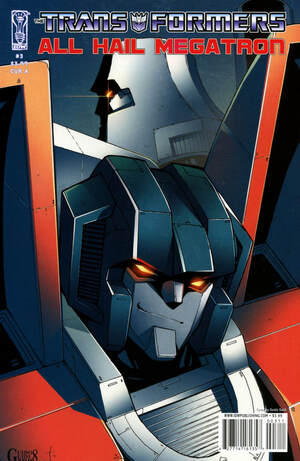 [STOP PRESS! Literally as soon as I'd finished putting this web page together on the night of the 20th January 2022, it was announced that IDW had lost the Transformers licence. That means there's no chance to really discuss it here, but click on the "Comment" link below for my very quick first reaction. Back to your regularly scheduled comic...]

The third issue does at least suggest that McCarthy is at least getting a handle on the structure of a comic, as it’s written with mirrored opening and closing bookends, creating the sense that this is a distinct unit in its own right and not a random chunk of movie storyboards.

Said bookends occur in New York subway stations, with the opening four pages devoted to desperate and cowed survivors hiding on a platform in what is clearly meant to evoke the use of the Underground in the London Blitz, with special focus given to a traumatised father dealing with his oblivious to the situation son.

Then they hear a train approaching and hopes are raised... until it turns out to be Astrotrain and he start crushing everyone, including the children, to death with his hands.

This opening not only has the same “Silly 1980s cartoon character doing a murder” problem the second part had (though at least, in a sign of things to come, Astrotrain in in his classic toys design rather than G1. Though as the character is treated as a lovable comedy idiot by every other IDW writer, that doesn’t help much), but for some reason Guido Guidi draws Traumatised Dad to look almost exactly like (current) series lead character Andy. Possibly it’s deliberate to add to the mirroring with the end of the issue, but it’s needlessly confusing it takes half a page to realise it’s not the same guy. 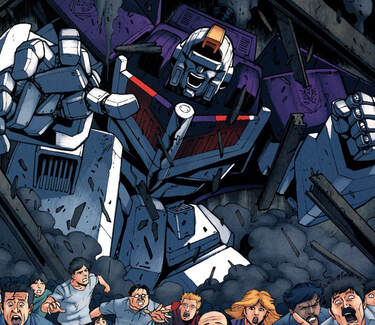 I cho-choose you.
Outside New York, it turns out at least a few days have passed, and the Decepticons have not only solidified their control of the island, but also launched attacks on other American cities such as the constant butt monkey of American SF (it got destroyed in Babylon 5 as well), San Diego. Which we only learn about through reports coming in over the radio in Colonel Witwicky’s tent as, according to McCarthy, Hasbro put their foot down over more mass death and city destruction in a “Kids” comic.

Maybe they weren’t paying attention to the pitch. It could certainly explain why not a lot happens in this issue. It likely does explain why how far the Decepticons have spread outside New York will be all over the place across the series.

What we do get to see is that the US Navy has been sunk, and Air Force One downed, with the implication that the President (depending on when Devastation was supposed to be set and what this means for the “One year later” thing, this would either be on his way out the door Bush or just sworn in Obama. Cheer or be sad accordingly) has died with it.

Both of which are played as huge, tragic events but seem a bit silly. First, though I know there are fans that find how the human soldiers can go toe to toe with the Decepticons in the films annoying, this goes too far the other way. How many Decepticons are on Earth won’t be specified (new ones appear this issue and later writers will retroactively add troops), but let’s say it’s around 20. That doesn’t seem enough to take on the entire might of the US army, let alone the other nations that would add their support to stop an alien invasion. Especially compared to how humanity have done both in the Furman and subsequent writers’ stories. 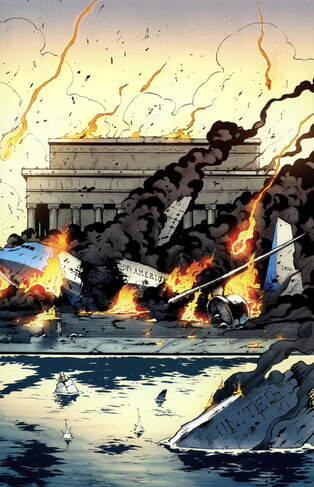 But are the Ding Dongs OK?
It’s strange because the story actually offers a good reason for the Decepticons being able to hold up in just New York (oh, and I forgot to mention this last issue, but an island city cut off from the mainland and descending into anarchy has a clear Batman: No Man’s Land influence and means it winds up feeling like a Dark Knight Rises precursor). Their ability to scramble targeted weapons only leaves the US with carpet bombing options, and that would kill their own people. Which is reasonable and means if they didn’t go out attacking military targets and winning, there’d be no issue here.

Mind, Witwicky talks about this hide behind the civilians plan as part of him being awed by the cunning and planning of his mysterious opponent, but as we’ve already seen the Decepticons are moving to kill everyone left in the city, hiding place by hiding place, it seems to have been quite unintentional on Megatron’s part.

Meanwhile, the destroyed Air Force One, is an arresting image, but why, days into a war on US soil, is the President flying about rather than nice and safe in his bunker?

Back in the city, we get the best part of the issue and our first actual character moment for Megatron. Starting with him having to reassure Hook that he respects his sacrifice in making do with substandard human materials in doing their special building project, and that even though New York is a “Hovel”, this is the place to do it as it’s a famous city and that will really get humanities attention.

Which is followed by Starscream arriving and Megatron actually chilling out for a moment, taking his fusion canon off and giving it a polish with a flag taken off a building. 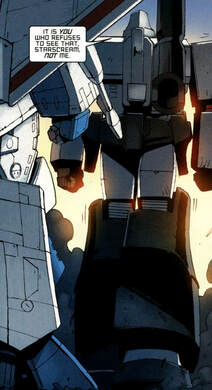 Hates to see him leave, loves to watch him go.
As well as revealing that Starscream downed Air Force One off his own back (surprised he didn’t declare himself the new President), we also learn someone was betrayed by someone (something very vague, but will get more significance in later issues), leading Starscream to wryly comment that treachery is in the nature of all beings, before being surprised at an actual compliment from Megatron. Making his leader point out that Starscream is in fact the perfect Decepticon, the only person holding him back from fulfilling that potential is Starscream himself.

Which ties into the idea McCarthy had, in the first of a few “Why does Megatron keep him alive?” solutions we’ll have over the years, that Megatron views himself as the solution to the problem that needed the creation of the Decepticons, but not the guy who’ll lead them when the job is done and that will be Starscream when he fully realises what he is capable of.

Which isn’t a bad idea and plays well.

But that this really is a padded issue is best shown by the following scene of a bored Rumble, and his pals the continuity busting Reflector trio, blowing up any random yellow Volkswagen he sees because he really doesn’t like them, and he has nothing better to do. 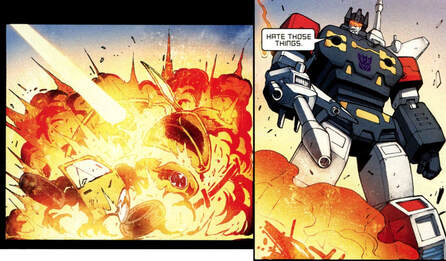 Hasbro when VW wouldn't give them the licence.
Andy and Bridge on the other hand, do have better stuff to do, having coordinated their own subway station full of survivors, organising food runs and prepared drills for a quick evacuation, something Bridge gives Andy the full credit for (Sarah is off doing something deeply interesting, no doubt).

They even find time to joke about Andy mistaking Ravage for a dog (though how the hell Bridge knows he’s specifically a jaguar is a mystery in and of itself), whilst Andy is taking the time to look in the crowd for his dead best pal DJ’s wife. So, it’s the closest thing to some solid character work he’s had so far.

Then Astrotrain shows up and kills him.

It’s an odd scene. Starting with, right after we’ve been told Andy has really gotten everyone working well together in his drills, everyone ignoring him when he calls a “Code yellow” as a train approaches, because apparently they think that, after days, the subway will have started running again. “The train drivers will save us” comes from the same mentality as the “If you think a police officer is going to rape you, run to a bus driver for help” advice the UK Met were giving out last year.

It’s a lazy tired Joss Whedon trick to do a “Surprise” death of the seeming lead character in order to shock the readers into thinking anything can happen. Especially when this comic had already done it with the DJ character in the first issue. Andy was only just starting to get established as he died, there’s no investment in him here, just mild annoyance that we wasted time on him explaining why he’s looking for some woman when it turns out to be completely pointless (and just in case you think it might become significant, no, she’s not going to appear later on). 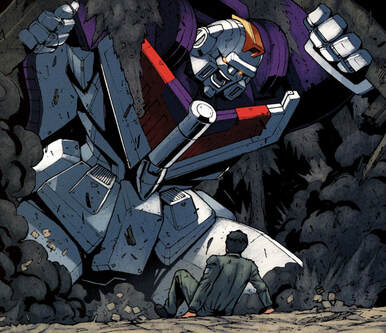 De ja vu.
And bluntly, I’m also cheating a bit in talking about Andy’s death now, because whilst that is actually the end of the issue, it’s so poorly conveyed (Astrotrain looms over him, then we cut to an explosion outside), it won’t be clear till the next issue that the cliff-hanger was not a “How’s he going to get out of that?” one. I only mention it here because there really isn’t much else to talk about.

Indeed, this may be the shortest Revisitation I’ve done yet, because it’s an issue bookended by two set pieces that are really the same set piece repeated, with only a few bits of new information and one nice Megatron and Starscream scene in-between. If you’d opened with the Andy Subway sequence and then had one page of “The navy is down, the President is dead”, you could have pretty much gone straight into the next issue’s content with very little lost. For something aiming for the pace of a movie, it misses why the Michael Bay Transformers films were popular despite being mostly nonsense: They did not slow down to give normal audiences chance to actually think “Why does this man have a “I am not a child molester” card?”.

This on the other hand, is so languid you just wind-up obsessing about things like the type of train Astrotrain is drawn to turn into couldn’t actually fit on US subway tracks. It’s a bad idea for something this light and frothy and bodes ill considering we’re only a quarter of the way in.

Next week though, it’s definitely not going to be short as we hit the first of three Furman final issues before he leaves this continuity for good. 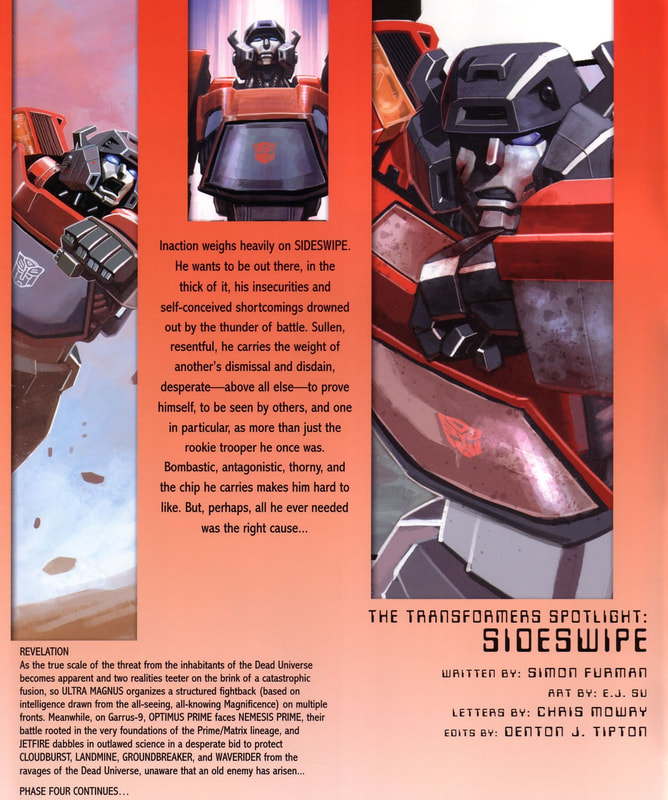