Hot Town, Summer in the City, Back of my Neck Getting Dirty and Gritty. 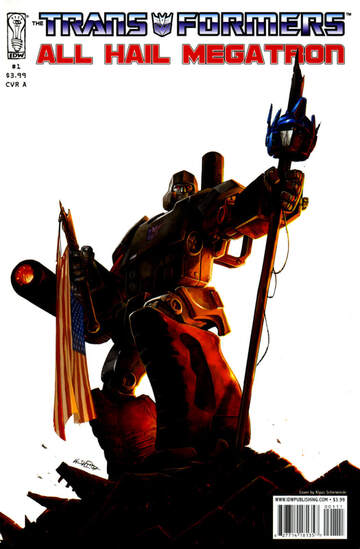 
You wanna see terror, wait till Megatron gets here.

​
The big issue for IDW during the next couple of years of this project is their desire to get sales back up to at least as high as they started with, maybe even to recapture some of the Dreamwave glory days. Something they’ll be trying to do without being able to face that the exact circumstances that made the first DW miniseries the number one selling comic book when it launched are almost impossible to replicate now the 80’s nostalgia boom is no longer at its peak and actually had very little to do with the comic itself.

So, after the downturn of the Furman sales figures, it’s going to be relaunches and revamps and changes of direction until John Barber takes over as editor and “This is actually the peak we’re going to achieve” becomes an accepted fact that things settle down.

This first attempted course correction, All Hail Megatron, starts from a position of having made some sensible choices. If readers, in theory, found the Furman stuff too dense and confusing, this is a return to cartoon style Transformers, very deliberately (mostly, more on that later) going for the look of the show. Coupled with a straightforward action adventure “Blockbuster” movie plot (as signposted by the title coming from a scene in the 2007 film) and the edgy “What if the cartoon villains could actually be bastards?” stuff Dreamwave did, albeit not as ham-fistedly as some of its contemporaries like the Thundercats Rape comic.

Now, ignoring how the transition from Furman to new boy Shane McCarthy is being handled, that sounds like a recipe for success. Every franchise needs to clean the decks and touch base back with its roots every so often, and there’s nothing wrong with a shameless romp as a pallet cleanser. 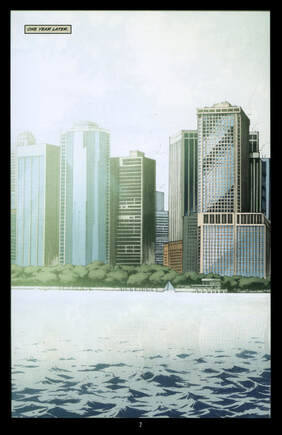 Imagine getting paid to write this page.
​The first warning sign comes from McCarthy having said that his original pitch, presumably when he chanced his arm at Ryall at a Comic Con, was a six issue series, but someone at IDW decided to make it bigger, a 12 issue maxi-series. A romp is fine, but can you drag it out over twice its planned length?

There’s also a question of continuity. The most sensible thing for this comic to have done, would have been for it to be a total reboot, letting it fully embrace its cartoon roots without having to worry about connections to the Furman stuff and easing the conflict between this starting before that has ended.

But, somewhat bafflingly (and not for the last time), IDW decided to stay the course with their timeline and therefore the attempt to both appease long time readers and quickly bring the hoped for new readers up to speed without feeling like they’ve missed anything is an opening shamelessly nicked from All Star Superman. One page of four panels, fighting on Cybertron (“A civil war”); the exodus from Cybertron (“A world in ruins”); Earth (“An unsuspecting planet”) and both sides fighting in their Infiltration designs (“A new battleground”).

I’d mentioned last week that this page wasn’t in the preview, but I’d forgotten that the next page was also skipped, for good reason. It’s a full page of the New York skyline and the caption “One year later”. And nothing else.

The three Stooges.
​In keeping with the blockbuster pretentions of the comic, it’s clearly meant to be an establishing shot like you’d get in a film. There’s almost an identical one in that classic of cinema, the 1998 Godzilla. In a film lasting two and a bit hours, it’ll take up about five seconds of screen time. Giving one page of a 22 page comic over to the same would be like the film holding an establishing shot for 20 minutes. It’s a writer who thinks he understands the medium without really having much of a clue how to translate the cinema style to comics and wastes an entire page and makes it feel like there might not be too much going on here.

Especially as the next page, a series of panels of New York’s Times Square bustling with activity before a green construction vehicle pulls into view does a much better job of showing the location, selling the bustle of a normal day and introducing an ominous threat the audience will recognise as being where things are about to go very wrong.

The reaction to the Constructicons transforming and revealing themselves gives us the worst and best of McCarthy in one sequence.

The worst comes in a gag borrowed from Bob Budiansky’s Dark Star, of the crowds being excited and wondering if a movie is shooting there. 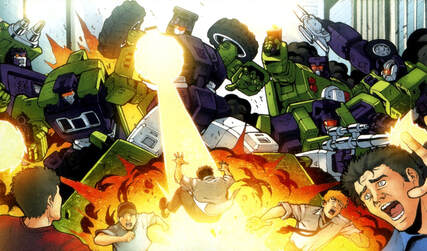 First blood (in the original edit).
​And of course, everyone being excited about these mysterious machines seems completely irreconcilable with Escalation, creating that immediate tension with the existing fanbase.

The best of McCarthy though, comes from Scrapper doing a “We come in peace” gag about how they’re there with a message of kindness and unity... before the entire team break down in laughter. It’s a nice moment that feels both real for these characters and raises a smile, and as dialogue it’s much better than Mixmaster later talking about “Soft” human construction materials. It’s also, ironically considering the one Transformers comic McCarthy will write that has no connection to this series, very Mars Attacks.

But then it’s time for less jaw-jaw and more war-war, as, after they’ve had their joke of the day, the Consturcticons just start shooting everyone (though now in a bloodless way, unlike the preview), before being joined by the Seekers, including a Starscream who is very dismissive of the idea that the real terror won’t start till Megatron gets there, until Megatron appears in an appropriately nice big panel for the title character. That Starscream and Megatron are full on cartoon mode here also effectively sets up their relationship for the series to come. 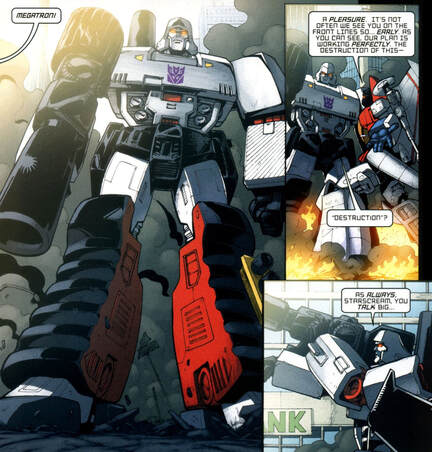 Big Thigh Energy.
The wrecking New York sequence that follows is gorgeously drawn by Guido Guidi, perfectly capturing the city wrecking scale of a Summer blockbuster in a way the actual films will take till Dark of the Moon to match.

Unfortunately this is then followed by the silliest sequence in the whole issue, as, cribbed from Independence Day (but with just white guys, probably luckily as for whatever reason the black background people have very odd skin tones), two USAF pilots, “DJ” and Andy, come out of their briefing, have some Best Mate Banter and fly into battle. But because their missiles don’t work against the aliens (thanks to Soundwave’s jamming in this case), one winds up dying.

There’s an attempt at a twist that it’s DJ, the one presented as the lead, but his actual death of failing at a suicide run on Megatron in every way except the suicide part as he looks at a photo of his wife in unintentionally hilarious. Especially when Megatron shouts “I AM MEGATRON” as he swats him aside like a fly, suggesting this is going to be the second IDW Megatron series to not feature great lines from him.

The aerial battle does add to the canon confusion somewhat—they know about the robots, but think they’re hoaxes and don’t know they transform—but does give one great moment where seeing a giant flying metal bird in battle just completely baffles one pilot. 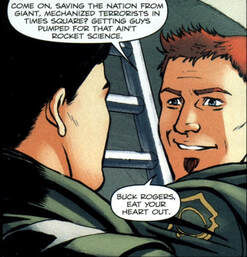 "Now that's what I call a close encounter!"
​Unfortunately, there’s more shameless stealing as a moment where a pilot has a POV shot of seeing a Seeker transform in front of him (explaining where the F-15’s came from) in taken wholesale from the first Devil’s Due G.I. Joe Vs the Transformers miniseries. And as this scene of city wide destruction is already evocative of the first Dreamwave miniseries (comparisons to which are only going to grow as we go along), it feels like there’s very little new on the table here.

What is on the table can be seen as we leave Earth and Megatron having a great time to go to Cybertron. Where a group of damaged and destitute Autobots are huddled. With, in a the first sign of IDW having to do toy advertising (though in a more hesitant and inconsistent way that will become the case later), some of them are in their contemporary Universe designs. 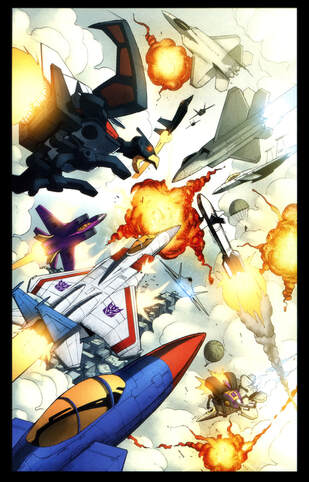 G1 Vs Movie Starscream.
We see Prowl take a tablet to Jazz, who throws it away in disgust (giving Prowl some ideas about tables), before we see Optimus Prime is lying, either dying or dead, with a massive hole in his chest.

Because Prime has to spend at least some time every year dead for tax reasons.

I’ve been fairly harsh on All Hail Megatron over the years, including when I covered the Titan UK comic’s reprint of chunks of it for Transformation (though don’t worry, I have not reread and this is an all new 2021 hot take). But, writing as I am on Christmas Eve, a seasonal miracle seems to have happened as my heart has grown ten times this day and, I didn’t mind this opening issue.

Largely thinks to Guidi’s art, it a big stunning action set-piece where the visuals compensate for the plotting beats that don’t work. And there’s some nice lines in here as well.

Indeed, I think it does what it sets out to do better than Spotlight: Cyclonus.

But, what it’s setting out to do is much less ambitious, aiming lower to fall far less short of the target. And what it wants to be is very cynical and soulless, there’s not a moment that doesn’t make you go “This is just like film X” or “Prior Transformers moment Y”, it’s desperately chasing the coattails of other, popular things with no thought to its own creativity. 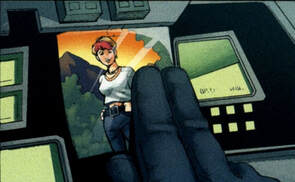 He doesn't actually know this woman.
​Which isn’t automatically a bad thing, most of the fandom love the Bumblebee movie despite being just as cynical in its bashing together of better things, but it would be very hard to sustain a year’s worth of comic from that. As we are going to see.

And as for the attempt to recapture past glories, this big heavily promoted relaunch famously sold nearly exactly the same as the “Oh yeah, better do that as well” Spotlight: Cyclonus.

Now, in the days when I still spent much time on forums and we had a good laugh at this, Shane McCarthy himself turned up to say that no, in fact All Hail Megatron had sold loads more. 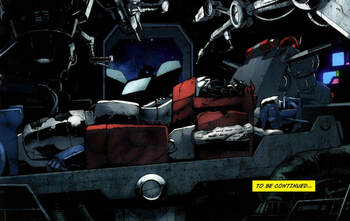 Oh no, not again...
Oddly though, when asked how the Diamond figures had missed loads of copies in a way that would not have also meant Cyclonus also having inaccurate sales, he vanished in a puff of logic.

Ultimately, you can chase past glories, but you can’t go home again.

Next week, how hardheaded will Furman be in sticking to his own plans? 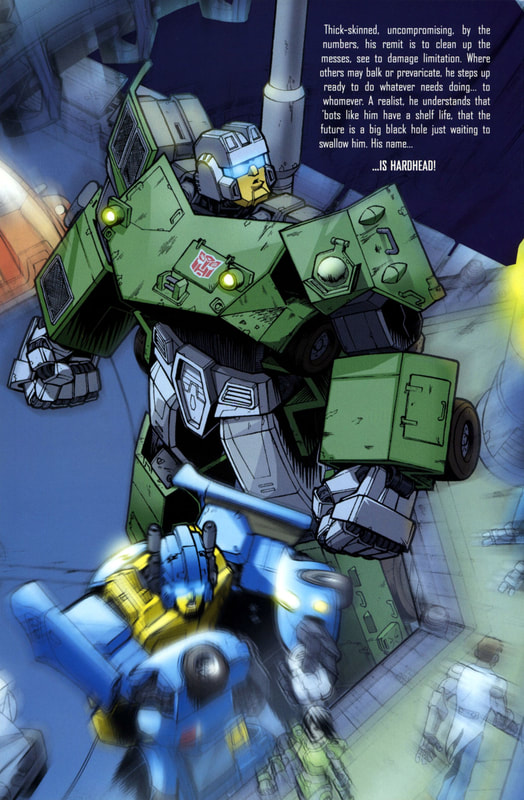