All the Lonely People, Where Do They All Come From? 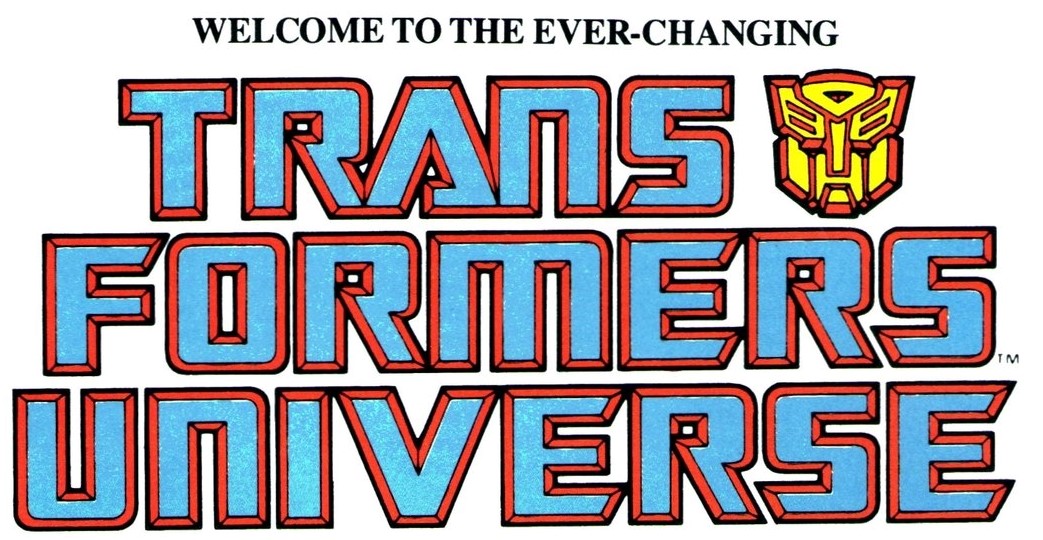 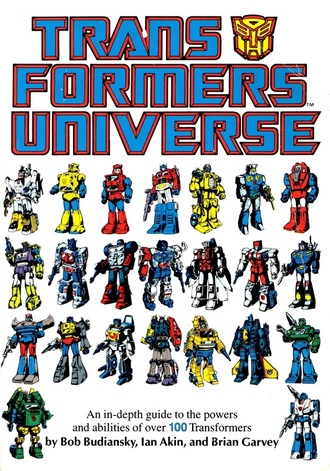 Transformers Universe is of course one of the absolute keystones of the entire franchise, a four issue limited series collecting and expanding all the character profiles Bob Budiansky had created for the toys, profiles that had made even the ones ignored by the cartoon and comic so much more than lumps of plastic to the children buying them. Profiles that paid a key part in helping Transformers take Gobots out into the middle of an abandoned field and burying it after putting two bullets in the back of its head. What is contained in this book (and this collected edition is a book, it’s the first Transformers trade paperback) is effectively what made Transformers as fiction a hit.

So to an extent that makes talking about it rather redundant as the contents are wired into the soul of every fan. From the iconic (“Freedom is the right of all sentient beings”) to the tiny thoughtful little details that helps to flesh characters out (First Aid’s OCD. Which oddly would be ignored by contemporary fiction but put to good use by James Roberts 30 years later) fans basically know all of this backwards. Especially as—despite it taking a very long time for any of this to be formally reprinted—scans have been widely available on the internet for years.

Even for children buying at the time there would have been something very familiar about all of this thanks to the British comic (once plans to republish the series as two specials fell through) repurposing the entries as the AtoZ feature. They were slightly simplified but the essential “Profile, abilities, weaknesses” setup was kept exactly the same. That’s hardly surprising considering the format was effectively cribbed from the extremely successful Marvel Universe series. It’s equally unsurprising that every other attempt to produce a Transformers character guide has doggedly stuck to the same structure. If it aint broke, don’t fix it.

So, with the basic content being so well known, what is there new to say about this collected edition? I think the most important thing to note in terms of its impact on British readers is that—despite a a price in pounds and the odd overtly optimistic addition of a “Volume 1” to the title—this is identical in every way to the American version published a year earlier. Indeed, it stands a good chance of being unsold American stock that has been re-covered.

Jim Salicrup's introduction.
Why is this significant? Because after years of the UK comic dancing back and forth on the existence of its transatlantic cousin in a way that generally came down in favour of the British version being the best even when acknowledging some of it was reprints, a lot of the contents of this book must have come as a bucket of water in the face to most readers.

This starts from Jim Salicrup’s entertainingly enthusiastic introduction talking about the genius of Bob Budiansky. We now know of course that Budiansky was a genius, but for a British kid who paid attention to the writers he was clearly (unfairly) the second best of the two recurring names and the total absence of any mention of Simon Furman must have seemed bizarre.

This is accentuated by the profiles themselves. Each entry lists a characters first appearance, but of course it uses the American issue system. So, to take the example of the first name in the book, it declares Air Raid first appeared in issue 21. And characters who never made it to the US (Red Alert) don’t even get that. I suspect there will be some confused letters about this to Dreadwind in the weeks and months to come, but for British readers this was the first exposure to the idea that the American book is actually the parent one, the one that matters and the British stuff is just some weird little offshoot of little consequence.

This is a world view that will, annoyingly, be the prevailing one once fans from around the world get on the internet and even in 2016 is still very present. As you may remember from my interview with James Roberts at the start of last year, there are a surprising number of people out there who will buy the trades of the American series but not even look at the British. With a lot of fandom based in the States this is the first glimpse for us poor Brits how the big fish in the small pond our comic will come to be viewed as.

Once you get past the “Wrong” first issue appearances, it’s actually amazing how readable this is in one sitting. It would be very easy for this to be dry collection of synopses (which many of the subsequent attempts to replicate this have often wound up as), but instead it manages to walk a fine line between not being so overwritten as to be useless as a reference but at the same time having enough of a lightness of touch as to be entertaining. It’s easy to see from this why Budiansky would be a success working in children’s’ educational publishing in later years as this would be a very handy skill in that field.

It is however obvious in places which characters Budiansky isn’t terribly fond of. The most overt of those he had a hand in creating is poor old Broadside. He’s a guy who turns into a plane and a boat who hates flying and rusts. The poor bastard. 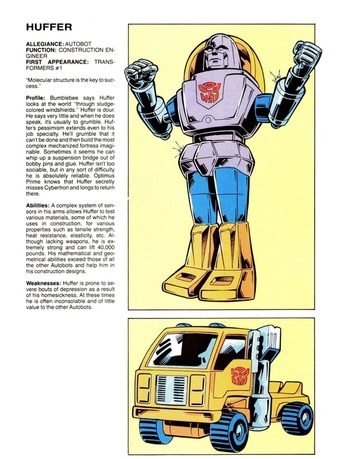 Huffer's profile with the abandoned "Round hood" character model.
The real victims however are the film characters. We’ve seen from how he did the best he could to ignore them entirely that Uncle Bob has pretty much total disdain for the Sunbow created Transformers, and that also shines through here with Hot Rod and company only gets the most token of efforts that have none of the style of the main body of the book and which often wind up feeling like a synopsis of their actions in the film rather than a description of their character. The film boys (and girl) being shoved into their own section at the back rather than alphabetically only adds to the feeling of apathy.

On art, Ian Akin and Brian Garvey do deceptively simple work, taking the front animation models and streamlining their overall look. Though the poses aren’t as flashy as future such guides would be, this makes for a better guide to how to draw the characters (considering how he struggles with Starscream’s ear, God knows what Jose Delbo would make of some of the poses in the Dreamwave More Than Meets the Eye book), and even now it still remains the definitive visual reference to the characters.

There are however some oddities, seemingly as a result of final animation models having been misplaced. Most notable is Megatron’s robot mode using an early design as seen in the first couple of issues of the comic, but Huffer and most oddly Prime’s truck mode also suffer. We do however get a bonus of Jazz’ Cybertronian mode from the cartoon (as seen by UKers this time last year in the 1987 Annual quiz page). The film characters all also use early designs (which would become the standard ones used by the UK stories), though that is more understandable considering this series was originally published alongside the release of the film. 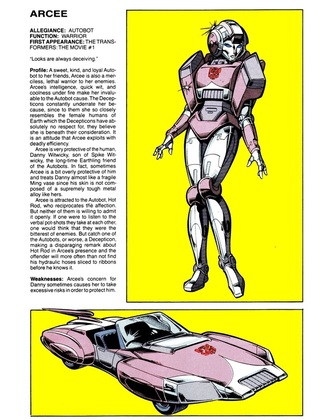 Arcee's old character model and insipid profile.
The book itself is an extremely solid package, as you’d expect from Marvel. Sadly however several profiles from the individual issues have been left out (Eject, Rewind, Inferno, Steeljaw, Sandstorm, Tailgate, Top Spin, Twin Twist and Pipes being the full list by the wiki), presumably for space reasons. That means that, even ignoring the profiles for subsequent characters which were never collected, this isn’t quite a definitive collection of the series. Many years later in 2015 IDW would attempt to rectify this in their final (black covered) Transformers Classics book by including every single profile published by Marvel. Sadly the attempts to remaster the art are very heavy handed with lots of detail having been lost thanks to the recolouring and the piece seems to have been put together by someone who misunderstands the alphabet as the new entries are all over the place. It also fails to include profiles for characters such as Hubcap which were created by not used and have only recently been rediscovered. However, in terms of getting everything that did see print in one place the IDW version is probably the best one to go for.

Despite some of the flaws in the presentation of the collected editions, this is an absolutely essential series, perfect for both dipping in and out of and going from cover to cover. There’s barely a page that doesn’t contain some detail or idea that adds to the richness of the relevant character or the overall Universe. This, more than anything is Bob Budiansky’s legacy to the franchise, and something that must have fired up the imagination of every child reading. 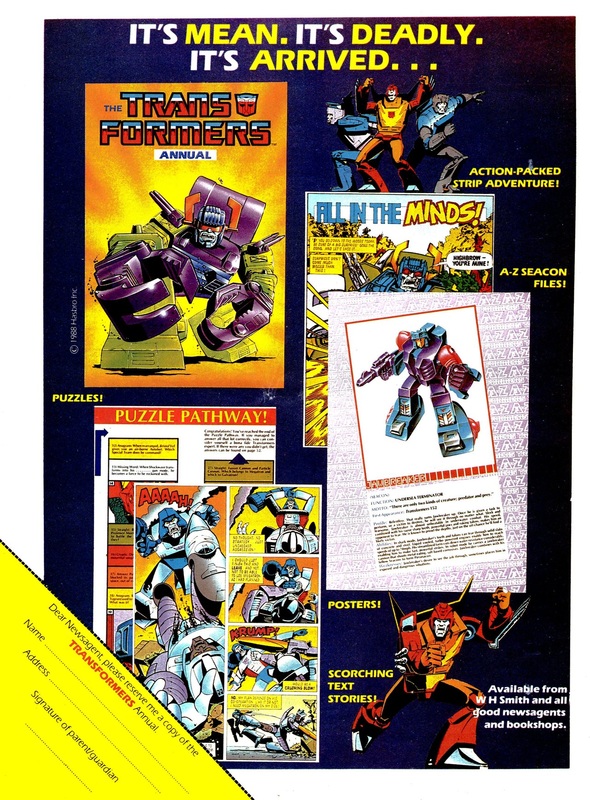