The man I used to be, I can only see by looking beyond me. 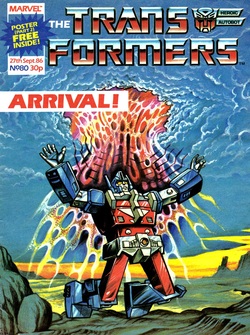 
Does that sound normal to you!


Happy birthday Doctor Who! Or possibly not. Depending on when I manage to get this up (still unsure as I start to write this) you'll be reading this either just before or just after the 50th anniversary. Or of course you might be reading it one, ten, fifty or a thousand years from now. Or possibly even not at all if Jenna Coleman's security gets hold of me before the big convention on Friday. Wibley wobbley timey wimey and so on.

Another person having trouble with his chronology is Cyclonus as he's confronted with an unexpected ghost of his future as Ultra Magnus makes it to Earth, which if nothing else shows the characters are as confused by all this time travel malarkey as the readers.

I've been banging on for the last two weeks about how Furman has been taking advantage of the length he's been offered by this story to build up the tension and pace in a more gradual and suspenseful way than usual and our opening this week is another fine example. In theory it's simple, two and a half pages (one of them a splash) of Hound and Jazz spying on Team Galvatron and watching the Constructicons build a big mysterious machine, before they're spotted and Cyclonus comes to blast the midsection out of Jazz and start roughing up Hound for fun.

In practice, the sense of unease is very carefully cultivated and there's room for small perfectly time beats like the incredibly sinister moment where it's clear to the reader that Scourge has spotted the Autobots and reported it to Galvatron without them realising,  all conveyed through pure visual storytelling by the on top form Will Simpson. There's also room for some desperate speculation on the part of the two observers that manages to plant what Galvatron is actually planning in plain sight amidst some more inaccurate but still plausible theories such as the idea it might be an immense energy transmitter for Cybertron.

We also get a lovely moment where Hound completely breaks down at the sight of the dead-looking Jazz emphasising the emotional impact the loss of three Autobots already this story has had. Again, all these little touches would get squeezed out by a smaller story but really add to the tone here. 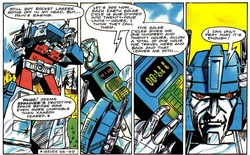 All that effort, and his clock is upside down.
Small is not the word to be used to describe the arrival of Ultra Magnus as the sky is ripped apart with his arrival via the use of continuity as it turns out Spanner had built a prototype space bridge that had one small advantage over the final version in that it didn't need to be cannibalised from his own body. There's a slightly awkward moment where Furman seems to forget that no one on Cybertron has had any contact with Earth before (indeed, we're taking it on faith that Perceptor bothered to tell anyone else they'd discovered Prime's location), as Ultra Magnus not only knows how humans subdivide their days but also talks out loud to himself explaining the time left till he has to be back on Cybertron.

Forced as this is it at least tells up the rest of the story will take place over five days (as even at this stage you just know he won't waltz back into Impactor's office with enough time left to put his feet up and discuss the weather), add in what can't be more than a couple of days for the opening issues and we have the irony that the story that takes three months to tell can't be set over more than a week.

Luckily for Hound the inexplicable knowledge of Earth in the guidebook at Autobase includes the rough location of the Transformers, meaning Magnus arrives within screaming distance of the little green jeep rather than, say, in Japan. This is less lucky for Cyclonus as this issue is his chance for some solo promotion action and Ultra Magnus intruding cuts short his one and only chance in the story to have a bit of a chat with someone.

Whilst what he gets to reveal about his character isn't all that surprising (he's a sadistic git), it's the glimpse into his back-story that's interesting as we follow up on the clue from last week that these characters have not always been as they appeared as he gloats at Hound about the time he was in a similar near death position before Unicron recreated him.

This revelation is our second glimpse at this story being written from an earlier draft of the film script as Cyclonus refers to having been rebuilt from "Life Spark", which, a decade before Beast Wars, was the term Ron Friedman used to refer to Transformer souls. For years before that (well, I say "that" but Furman was likely working from a later version that still retained the term as what Cyclonus describes is more like the final film) early script came to light fans found this a bit confusing and the best guess was Life Spark was Furman's attempt to name the person Cyclonus used to be, as we at least knew the final script was unhelpful on that score.

Even with our new sexy knowledge this might still be the case as Cyclonus seems to refer to Life Spark as "He", though it could just as easily be either Furman wanting to be ambiguous so as not to give away these are characters we know, or even that the script itself was a bit confused and that's why the whole Life Spark idea was dropped. Either way, the wistful glaring into the middle distance expression Simpson gives Cyclonus whilst recounting his story is a very nice touch.

Ultra Magnus however is a bigger and more expensive toy and interrupts Cyclonus' attempt to promote himself by showing how much better he is. There is actually more to it that that though as Cyclonus' reaction of pure fear followed by running away continues the trend of Impactor and Xaaron where characters treat Magnus and his abilities with awe without him actually doing anything. Effectively this is building up the anticipation in the reader of the moment where he will eventually cut loose and unleash the powerhouse that has everyone else bricking it. 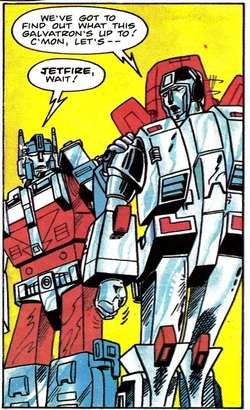 I used to be the new toy!
One shame visually here is there's no sign of Cyclonus grabbing Jazz as he flees, which we have to sort of assume happens unless Magnus couldn't be arsed to bring his body back to the Ark. Still, the scene of Cyclonus reporting to Galvatron continues the third person build up of Magnus (and masks a casual mention of Autobot City Earth which will become important later) as the Decepticon leader considers the Autobot more of a threat than all his colleges combined. The two are now on a collision course, even if Magnus doesn't know it yet. For now though, Galvatron has a plan to draw the Autobots into rash action...

Back at the Ark, you'd be forgiven for thinking that the guy promoted as the New Leader would wind up being the New Leader, but Jetfire (and much like Hound it's been absolutely ages since Jetfire has done more than pad out crowd scenes) isn't having any of it as he finds another mysterious new arrival highly suspicious and has exactly zero interest in his mission to find out what made Optimus Prime explode when there's new Decepticons to deal with.

Any attempt at rational discussion where both Autobots can come to some sort of understanding is rendered impossible as Galvatron plays his trump card, phoning up with all the suave sophistication of Roger Delgardo, mildly reprimanding the Autobots for their uninvited house call and for leaving something behind...

Cut to how the story ended for those of us reading the Collected Comics version as Jazz is strapped to a torture machine (presumably knocked up by the Constructicons in a spare five seconds), withering in agony as Galvatron casually invites the Autobots round to collect him. That's a hell of an image to be left on for a decade, and Simpson again plays to his strengths with it. 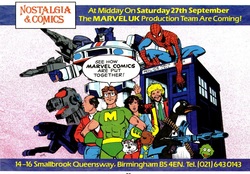 The closest to a Who/Transformers crossover we may see.
It's strange to say that this issue has by far the least actual events of the three instalments to date, but at the same time gets away with it as the build up of the sense of terror and foreboding is the perfect example of an exercise in mood and helps increase the doom laden atmosphere the rest of the story will trade on.

The atmosphere in Hercules is suddenly a lot more doom laden as well, thanks to all the alien allies he's made in the last two weeks being brutally killed by servants of a Universe threatening God who even have the power to tie our hero up with no problems. Herc's assistant is able to free him despite losing his legs, but for the first time in the series there's a sense of genuine jeopardy.

Grimlock gets the first letters written directly to him, beginning his era in earnest and the way forward is signposted by him having to explain twice that the cartoon is completely wrong in how he was portrayed. Remember this once 1987 is well underway.

You might be wondering why I've not mentioned the second half of the poster yet, but that's because my copy is missing it meaning you'll have to use your imagination there. We do however get another fun Nostalgia and Comics Marvel event, this time for the Brum branch and with Transformers in the advert, hanging around with Frobisher from Doctor Who Magazine. This sounds like where we came in.

Next week, back on schedule, it’s a bad day for Ironhide as he goes digging for ideas. 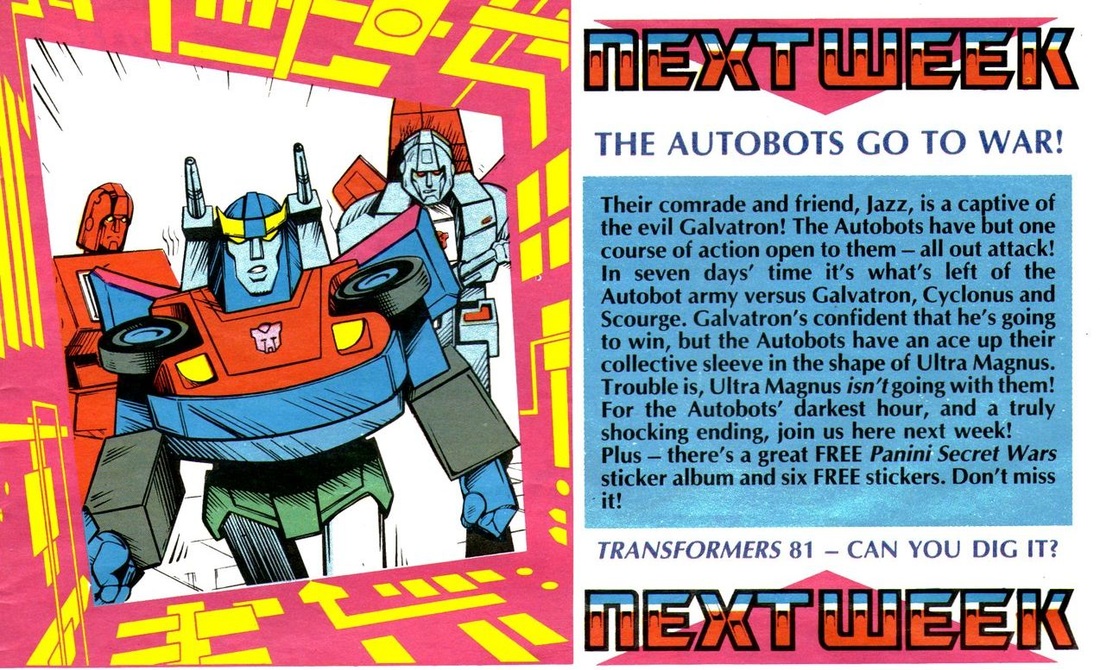