You're A Monster Mind of the Future. 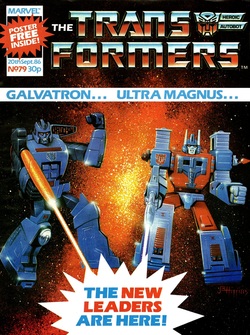 
I have to wonder how many comics (even in 1986, when, as all we old farts know Things Were Better) with a target audience of the under tens would kick off the first page of an issue with a narration box containing the word "Somnolent", I had to think really hard to remember what it means now and almost certainly found it a bit of a head scratcher back when I first read this in Collected Comic form.

It's only the smallest of small details, but it shows the extent to which Furman is determined not to talk down to his audience and instead drag them up to his level. Though for those not impressed by multi-syllable words we also open with a smashing splash page of Cyclonus and Scourge blowing up stuff real good.

Effectively this instalment is the show-off issue for the new Decepticon toys, featuring their alt modes (even managing to squeeze in Galvatron's little seen "Hmm, a cannon doesn't really have much play value, lets fiddle about with it a bit and see what we can come up with" handgun mode), abilities and roughly sketching in their personalities. Though in the case of Cyclonus and Scourge we are talking really roughly, even if there are a couple of moments that foreshadow things to come in a completely unintentional way.

There are three things to note about the scene of carnage, the first being that there's even more human death slipped in under the radar by not being directly commented on as a passenger train and garage are blasted to bits. 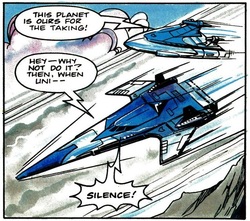 Foreshadowing!
The second is Furman does at least make the token effort for this to not just be a toy advert by giving a plot based motivation for it: The two jets are testing their new "Forms", cleverly making contemporary readers assume they've taken on new alt modes as the original Autobots and Decepticons did. Said readers might even be puzzled as to why they've gone to the effort but not adopted a more convincing Earth disguise. What the line really means will be of some significance next week.

The third is the first, and perhaps surprisingly one of only three examples throughout the entire story, overt sign Furman and the artists were working from a (seemingly not remotely final) script for the film with few visual aids beyond the character models. Hence either Furman or Anderson has interpreted the scenes in the film of Galvatron riding in Cyclonus' cockpit as happening with him in his small handgun mode, presumably thinking it was the only way he'd fit in it. So a moment that's clearly intended to evoke the movie winds up feeling oddly different to it.

Meanwhile, over at the Decepticon base in Wyoming we get what is in theory a very nice scene that combines both a recap of the previous issue with a look at how shell shocked the Autobots are as a result of having seen Optimus go BOOM, they're spying on the Decepticons because they've got no better ideas and Ironhide stumbles over his words as he tries to avoid describing Prime as "Dead".

However, the whole melancholy mood is somewhat buggered by what may well be the most infamous part of the whole story. Last week Furman went to the effort of explaining why the Dinobots wouldn't be involved in a fairly sensible way, here he tries to do the same with Omega Supreme (who is presumably too new a toy to be seen getting the arse kicking all the Autobots receive over the course of this adventure and must thus be kept safe) with much more mixed results.

Smokescreen makes the perfectly common sense suggestion of setting Omega on the Decepticons as a way of venting their frustration and is almost immediately shot down as the future Decepticons arrive because Hound (who isn't even in charge) thinks 12 Decepticons are too many for the big Autobot, as if he thinks the plan would be the rest of them would sit around eating popcorn whilst he did all the hard work.

This attempt at hand waving is far less effective than simply ignoring the Omega question would have been as it simply draws attention to the fact that no matter how dire the situation gets they never bother to call him up. Tellingly this is the last time there will be any sort of effort to keep track of the entire cast, from here on in the comic will just sort of hope you don't wonder where the bulk of the increasingly vast number of transformers are.

For those curious, and who are able to track down a copy, the top notch T25 fanzine done by TMUK for the 25th anniversary features the short story Target: 1986 by none other than the just about pre-fame James Roberts that features a cracking and rather unexpected explanation of what Omega was up to that, in typical Roberts style, is both hilarious and perfect whilst being a throwaway detail.

Starting as they mean to go on.
This musing from the Autobots is interrupted by Galvatron's arrival and we get the big buzz of Megatron and Galvatron meeting for the first time. For kids at the time this is exciting as it's the Old Leader meeting the toy promoted as the New Leader. For those of us in the know it's the equivalent of a multi-Doctor story, or Joseph Gordon-Levitt and Bruce Willis facing off against each other.

It's fair to say that if most of us were to meet ourselves from 20 years ago we'd find ourselves to be a complete and utter tit. Why are you wearing that? Dating her? Thinking that job was a good idea? This is especially true here as Galvatron does he best to be polite, friendly and truthful to Megatron (the latter is especially respectful as it would be much easier to go with Megatron's assumption that the new guys are the troops Straxus was supposed to be sending over the space bridge) in his request to borrow the Constructicons for a bit in the benefit of the future Decepticon cause.

Unsurprisingly Megatron responds to friendliness by shooting Galvatron and telling him to STFU NOOB. This, in the aforementioned hint of things to come reveals Cyclonus and Scourge are actually impulsive enough to want to kill Megatron outright, before Galvatron reminds them this is A Really Bad Idea. Still, Galvatron has clearly had enough of his idiot younger self and does what most of us would probably like to do our idiot younger selves and buries him (and the ever loyal Soundwave) under a ton of rocks before taking the (hilariously unbothered) Constructicons for himself.

This need for grunts to do the building work on his mysterious project is yet another nice little detail as it deals with explaining why Galvatron has come to 1986 rather than before the Ark was reactivated when he could carry on in complete privacy. It's only a small thing but neatly covers a potential plot hole before the reader has had time to think of it and really shows how Furman has thought this through. The whole sequence is easily the highlight of the issue and a sign of how well most of the future Galvatron/Megatron interaction is going to come off.

You may be wondering why I haven’t yet touched up the fact Galvatron doesn’t remember any of this happening in his past, but what this might mean and possible reasons for it are things we can look at when we get to issue 88. And issues 96-98. And 101-104. And 106-107. Plus most of the rest of the series. 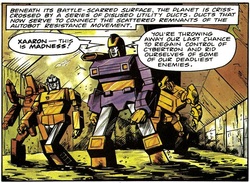 Whirl!
We then cut to Cybertron where we get the debut of an important and vital character.

Yes, it’s Whirl. Sure, he’s block coloured and standing behind (the oddly less impressive looking than last issue despite Anderson being on art again) Impactor, but you can still feel his star quality shine through.

Also, some dude called Ultra Magnus. The scene of Impactor and Xaaron discussing the wisdom of sending their best warrior to Earth right before the important Operation Volcano nicely keeps up the political bickering from last week and helps gloss over some of the logic flaws in the Matrix Flame idea (the Autobots have had a sign Optimus is alive for four million years have they? So why did Perceptor and company think he was dead? Why did they never bother with any sort of rescue mission? No wonder they lost the planet), and the splash page reveal of Magnus at the cliff-hanger is pretty damn cool. Though yes, it is now impossible to read him referring to himself in the third person without expecting the full Duly Appointed Enforcer of the Tyrest Accord title to follow.

This issue again shows how Furman is revelling in the length of this story, in a more conventional four parter the need to show-off the new toys would really hamper the forward momentum, but here he can take his time to pimp the future Decepticons and have some fun with the whole My Two Megatrons idea, safe in the knowledge he can afford the slow burn build up. The perfunctory nature of the Autobots cameo does drag it down a bit, but there’s still lots of good stuff here. 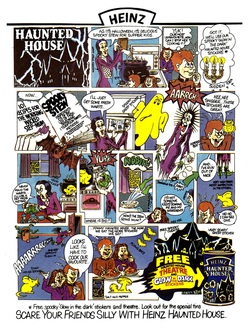 How dare parents try to cook for their kids!
As there is in the rest of the issue, we get a poster! A giant poster no less, being the first half of one showcasing Magnus and Galvatron with some extremely toy centric art. It’s nice enough, but it’s the sheer size of the thing that impresses. It even manages to fit in some foreshadowing with the first proper name check for Unicron and a cool visual of Laserbeak on Galvatron’s arm.

Hercules still feels as if the series is running out of ideas as we get yet another bar room brawl, but viewers of modern Doctor Who will be tickled by the stealing planets plot which suggests the Daleks are big fans of this comic.

Speaking of Doctor Who, I’m writing this the day after the minisode prequel to the 50th anniversary special The Night of the Doctor was put online, with the surprisingly exciting return of Paul McGann to the lead role. In a story which “Canonises” his Big Finish audio adventures. Which; as his name has been usurped by a mad fan for a recurring Time Lord in the audios (most recently popping up in Big Finish’s own 50th story); rather delightfully means that in the TV Who Universe there is a Gallifreyan by the name of Lord Straxus. This silly little kid’s comic has had the most unexpected influences.

Next week’s entry will be somewhat erratic in appearing as I’m both going to the 50th anniversary Doctor Who convention (not to try and touch Jenna Coleman, why would you suggest that?) and having my windows replaced on one as yet to be undecided day. So it will either be up on Wednesday or Sunday. Or somewhere in-between. But we will definitely be seeing Ultra Magnus come down to Earth.

Oh... it means sleepy/dozy. Why didn’t he just say so? 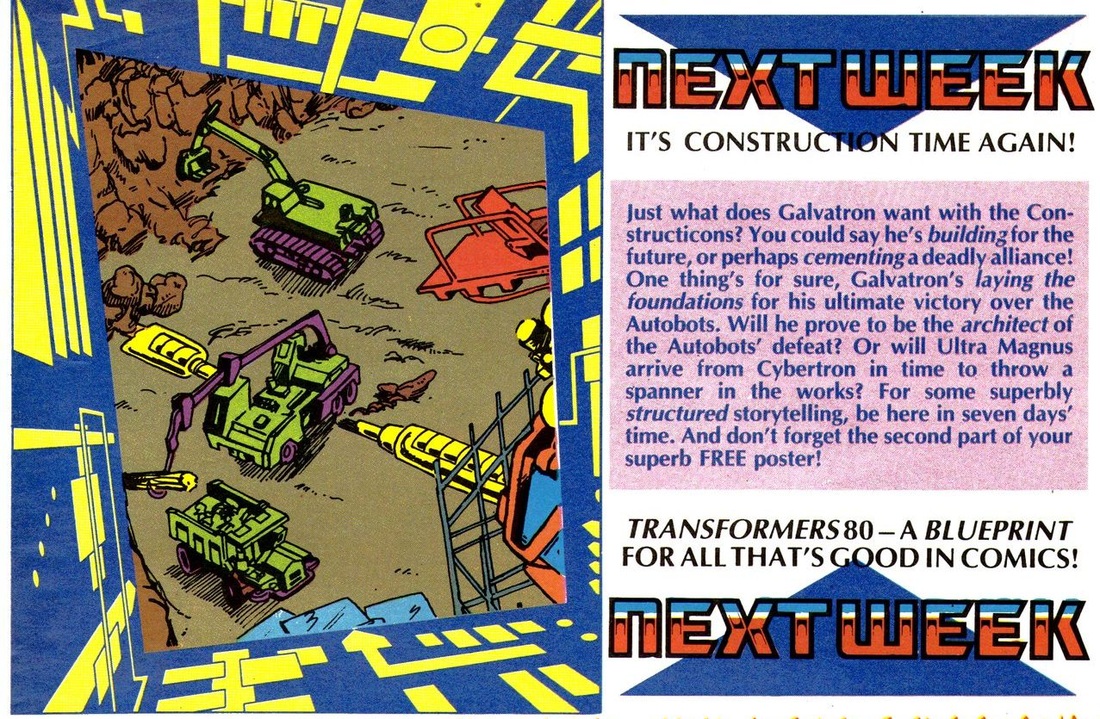