Come With Us, We are Free. 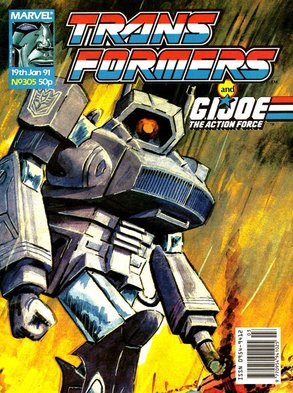 
The cover is especially interesting this week for two reasons. First, it’s the first cover of a great many to homage “...Are all dead” from way back on the front of U.S. 4. It’s also the first cover to be repurposed old art, in this case the art from the calendar from all the way back in issue 29 close to five and a half years ago. A later letters page will mention it was quite an effort digging this out of the archive, likely more than following the standard practice of this time of just commissioning new art. Did something fall through? Or was the original plan to simply reuse that classic cover itself, but they didn’t have a clean version to slap the new logo on, meaning a bit of a hunt for the tribute by Richard Fisher?

Of course, the reuse of the cover does rather blow the reveal of Shockwave at the end of The Human Factor!, but it’s been very obvious for months who Mr Mystery Purple One Eye was. Before that though, we’ve got to get through the mud of a very weak climax. After a couple of pages of the super-humans slapping each other about, Hector declares he’s had enough and will listen to everyone’s options before making his own choice. 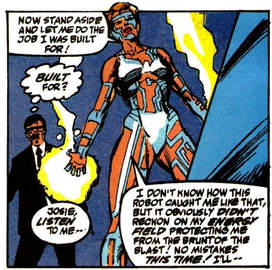 The good bit of the issue.
Starscream’s offer is to rule the world together, though it’s not really clear how even being a fancy Powermaster will achieve this. At least he has the sense not to say “And you’ll spend all your time plugged in my belly”.

Circuit Breaker makes the weakest offer of the lot, just assuming Hector loves destroying robots as much as she does (that is, once every couple of years or so). But she’s nuts, and so at least has an excuse.

Blackrock’s offer is just bizarre though. Rather than “You’ll be given American citizenship and immunity”, the things we’ve already established were the carrot to join the Neo Knights, G.B. goes on about how he can’t guarantee anything and the whole world might wind up hating them. 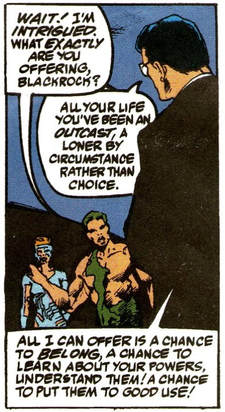 So offering nothing then.
You know, like The X-Men. Which makes literally no sense and is deeply unappealing. But just by offering “A chance to belong somewhere”, which is weak sauce, he seems to be swaying Hector over. So Starscream is about to pull out a tiny gun (why not the ones on his arms?), but luckily Rapture sees him and mind-zaps him again before Thunderpunch—and have I mentioned Thunderpunch doesn’t wear shoes?—kicks him to the ground and Hector cheerfully goes to be feared and hated by a world he’s sworn to protect.

The one good thing here is, of all things, Circuit Breaker. Mainly by how Furman really builds up her mental breakdown far more than Uncle Bob ever did. First by referring to her old self in the first person (“Josie Beller died years ago...”) and then talking about being built to kill robots. It’s actually very creepy, and when she takes Blackrock’s offer of coming along for help at the end as well it feels like a lifeline has been thrown to a much misused character.

And of course, having taken down a killer evil alien robot, our heroes then... fly off in their helicopter leaving Starscream behind without even a mention of thinking he’s dead or having called in backup to collect a prisoner. I suspect we’ll all be looking back fondly on RAAT at this rate. Still, that leaves Starscream (if not the reader) surprised by the emergence of Shockwave from the sea, offering the chance to take over the Decepticons and rule two worlds. Which almost brings us back to where we were in the UK stories last year, if not for Starscream being so insistent Shockwave is totally totally dead. 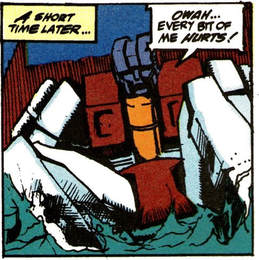 I know how you feel.
It’s still a well done dramatic reveal though, but not enough to save a padded dull story full of badly written characters. The terrible art doesn’t help, but there’s only so much that can be done to polish a turd anyway. Luckily, we’re about to enter the comic’s Indian summer, making this the final out and out failure of the series.

Transformation not only carries on the ruining of Shockwave’s appearance, it backs up the idea he died back in issue 159, with nay a mention of his many appearances over the last three years in the British stories. A line is being drawn here, one that Darn’N’Blast spells out more clearly later in the issue.

The editorial also does everything it can to try and put you off buying the comic. Firstly by admitting the art is terrible (“Don’t bother to complain”), then putting the boot into the end of G.I. Joe: The Action Force by talking about it ending on a whimper, “Fizzling out like a damp squib”. Well, I’ll certainly be getting this action filled issue. And yet it’s Euan Peters who is remembered as the rude editor. 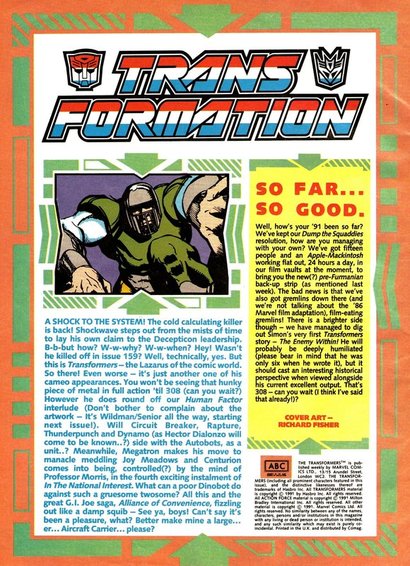 Normally I'd just include the sidebar, but there's so much to unpack here...
The sidebar fills in more details of the approaching new format, in particular that they haven’t been able to find the earliest UK stories in Marvel’s film vault (I suspect Man of Iron was never returned from America), so from issue 308 we’ll be seeing The Enemy Within! Great play is made of the chance to see early Furman (“please bear in mind that he was only six when he wrote it”) to provide an “interesting historical perspective when viewed alongside his current excellent output”. There’s also a very odd reference to Gremlins. No the film, but it’s “’86 Marvel film adaptation”, as if that would be better known to readers. It’s also especially odd as the comic of that film was reprinted by Marvel UK in the same year as its release, ’84. Typo, or did someone get confused by talking about a movie in this comic that didn’t have Orson Welles dying in it?

Speaking of old stories, the current reprint ends part 4 with Swoop seemingly crushed under rubble, so naturally the Next Week page assures us he’s OK, because why have any risk of drama in this comic?

In other Marvel news, Spider-Man is returning to British shelves with the appropriately named The Complete Spider-Man, promising to reprint all four of his American monthly books (adjective-less, Amazing, Web of, The Spectacular) in one super sized special, effectively a precursor to how Panini handle American reprints now. This will be eventually undone by the desire to be, well, complete and there often being more than four Spider-Man books in a month when you include crossovers and specials. Later iterations of this idea will do more to pick and chose. 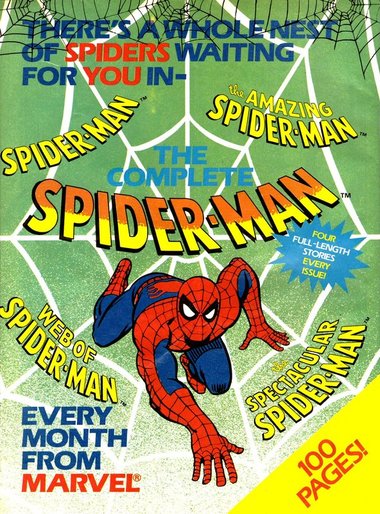 Who actually wants a whole nest of spiders?
The final ever G.I. Joe: The Action Force strip is actually far from a damp squib as the Joes invade, Hawk is kidnapped, Cobra Commander and Serpentor’s troops face off and in a massive not be resolved cliffhanger; Destro’s troops storm the beach. And amidst all the snark there’s no attempt to reassure readers this will wind up being continued in a Collected Comic (though only the third of the four parts would be included there. Almost as if G.I. Joe: The Action Force was deeply unpopular). I’m not a huge fan of the series, but this has been a decent storyline (probably the last one of Hama’s, after this the book goes completely off the rails, reading like what you’d get if Bob Budiansky was still writing Transformers at issue 150) and after more than two years it probably deserved a better send-off.

But let’s face it, the one thing people remember about this issue (helped by it being on the cover—the same used by the special—of the next part as well), is the Baroness being tied to Serpentor’s HISS tank in such a way that he boobs are thrusting out. The Joes exit the book doing what they do best, being kinky A.F.

And I’ll tell you this, normally on a Thursday I’ll tweet pics from the issue as I read it. Partly to build up interest, partly to test out some ideas and jokes, but mainly to steal all the best replies and pass them off as my own. And what I learnt from tweeting the Baroness image is a lot of my followers really do know the best way to tie a woman to a tank.

Blaster assures John Gordon from Norfolk the profiles will return in issue 308, jokes to Carl Oslar of Humberside that David Lynch is in talks to direct Transformers: The Movie 2 and deals with an angry letter to Dreadwind from Tanya Dean of N.S.W. Down Under about his inability to spell Mecannibals. Which feels like a personal burn. 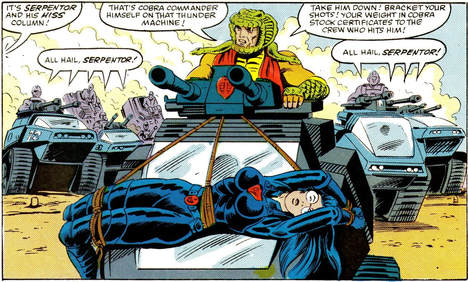 This is a storyline best remembered for two things.
The big thing though is an almost throwaway detail in a reply to Joseph Faulkener of Diss (great place name) asking about the Survivors: “Some have been written into the new continuity, Inferno in Rhythms of Darkness for example”. The “New continuity” part being key, from an editorial view a least we have slipped into a soft reboot without even realising. One where none of the UK stories happened, meaning the editorial can do things like claim Shockwave has been dead for years. Which handily also means there’s no future need to alter speech bubble to try and make things fit. Of course, Furman himself will remain a bit more flexible, doing a sequel to Demons! late in the book’s life, but we have basically left the local content behind now.

In a book that will continue to reprint the local content.

Talk about a mixed message.

This issue is also the end of the “Split each US issue into 4” period after close to two years, though the new format won’t bed in properly till the series goes fortnightly in a month. It’s fair to say this has not been a success for the series, even on the most basic level of trying to spread the American stories out enough to have one every issue. The British stories were often variable and it absolutely killed the pacing of the American, frankly this has been a very tricky chunk of issues to write about and I’m going to be glad to head back to some sort of normal service.

But before that, what is effectively the book’s final chapter kicks off as Andrew Wildman makes the leap to America and Optimus makes a very tough choice. 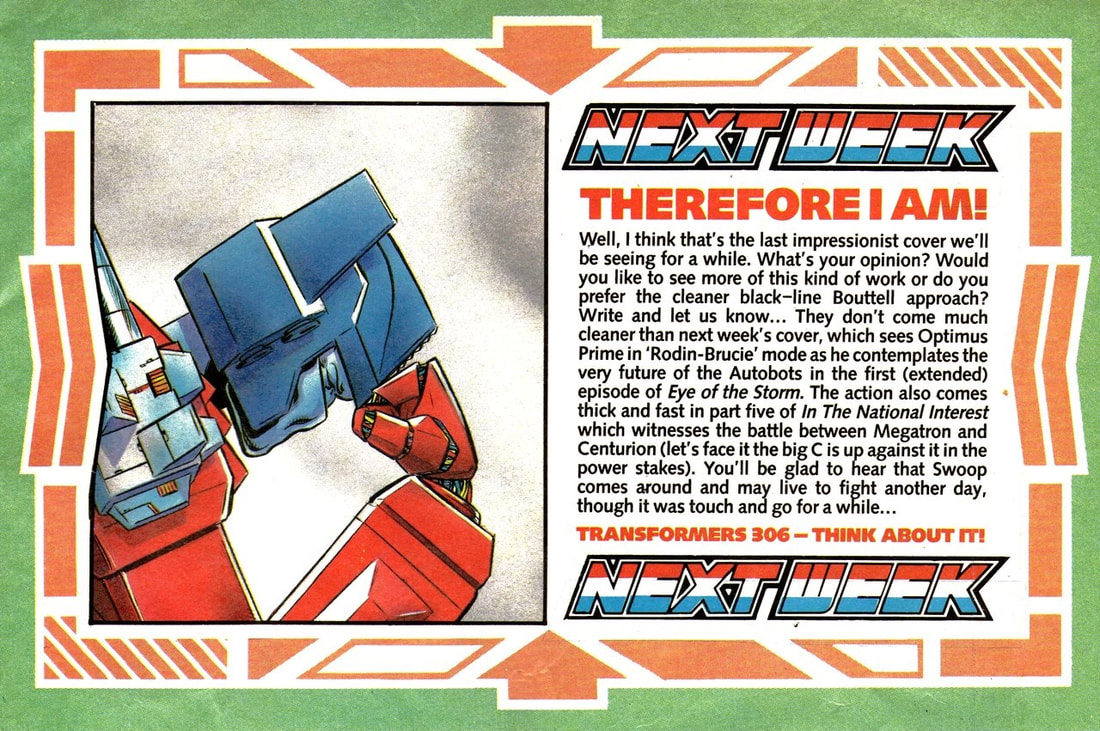