I Know Where You Are, You're Down Drinking at the Bar. 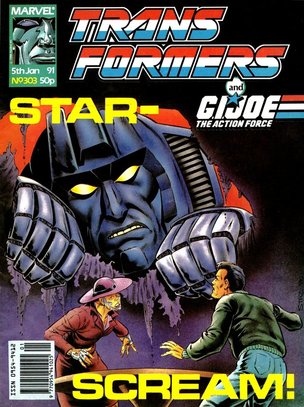 
Never be able to show myself at the bar again, ay?


The Staz cover this week isn’t be the best in the series, but it does prepare us for the return of Circuit Breaker, in particular setting up the way her character has evolved in the two years since we last saw her. She now wears a hat with her flasher mac. Because obviously the boobs and ass should be easy access at all times, but don’t go near the hair whatever you do. It’s probably lucky the lead reprint features one of the book’s more solid female characters in Joy Meadows.

Considering how cut up the stories are during this soon to end format the book is using, it can be understandable if the first of four parts winds up heavy in exposition (though last week over did it to a ludicrous extent). But it’s more worrying when you get to the end of the halfway point and it’s still nearly all talk talk. There is an attempt at an opening action scene as Starscream takes out a USAF fighter, but unlike the similar moment in Wrecking Havoc!, it adds nothing to the story beyond showing us Turner has no more idea what an F-15 looks like than he knows how many fingers a human has on one hand (he draws Lee with three at one point). 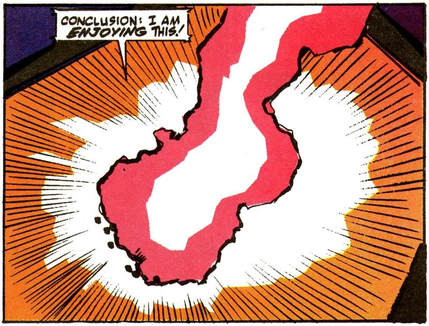 But who is this?
The point of this sequence is for Starscream, who is in a hurry to capture the mystery human for himself and therefore stops flying to walk the rest of the way, to deliver a long and quite dull speech out loud to himself. Why this isn’t being done via thought bubbles isn’t clear, but it boils down to him wanting the mutant to make himself a super-duper Powermaster. Because being a Pretender has worked out so well for him. All of this could have been covered in about three panels of him thinking as he flies, suggesting the problem isn’t just the art.

There is one bit of actual plot progression though, as our mystery purple one eyed logical Decepticon is back, and following Starscream because, whilst it might not be logical, it’s actually something he’s enjoying. Which is probably the only decent character beat in the whole story. 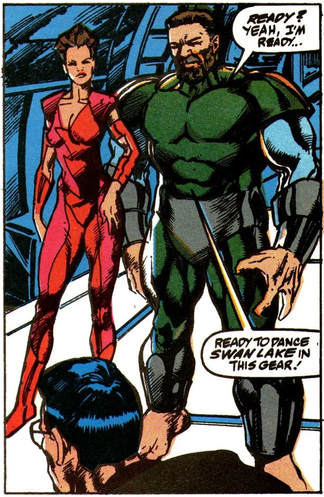 How many fingers does a human have, Dwayne?
Meanwhile, our new superhero team are flying by chopper to the area where Blackrock has (somehow) found Mr Mystery and (somehow) learnt he is illegal immigrant Hector Dialonzo and he’s basically going to be forced to join Team Blackrock in return for immunity and citizenship.

I mean, Blackrock makes it sound like an offer, but what choice would Hector have actually had? Especially as he’s wanted for destroying an oil refinery as well presumably.

Before that though, we get an incredibly painful sequence of Blackrock looking at a giant picture of Circuit Breaker. Not because he can’t last the course of a helicopter ride without a crafty wank, but because he’s still riddled with guilt over not having helped her properly, or indeed having seen her in over five years. Which makes sense, but the lead in to the full exposition of her backstory is awful as Lee asks about her because he thinks she might like to party, ay.

I mean, she’s a naked woman covered in sellotape, but that’s no reason to get all kinky. Sounds like it’s not Blackrock that needs the masturbatory aid.

It’s worth noting that Lee is presumably supposed to be Irish, but by constantly say “Ay” at the end of everything he seems like a mentally ill Yorkshireman.

This is where Lee and Katrina reveal their superhero costumes. Which are awful. Something Furman may have agreed on considering his later stated opinion of Turner’s art as Lee immediately lays into how rubbish they look. Whilst still finding the time to sexually harass Katrina by saying she’s not hot enough to wank over in her outfit. 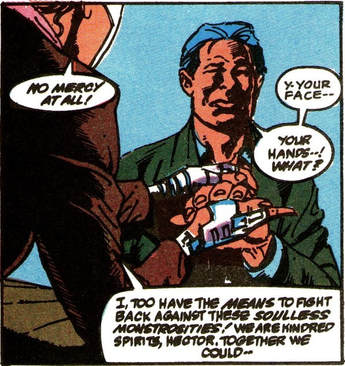 What does a Mexican look like Dwayne?
The final page does at least have a nice mood to it, as Circuit Breaker arrives at the bar Hector was waiting to meet Blackrock at (note she’s actually wearing a blouse under her coat this time!) and is creepily passively aggressive towards him about fighting giant robots with her.

Yes, in the last two years she’s totally failed to find any robots, but can locate one strange mutant human with no trouble. What has she been up to? Buying a hat and blouse?

Luckily for her, the robots decide they’ve had enough of waiting as Starscream bursts through the wall! Meaning the issue ends at the point it’s almost getting interesting. Frankly this is awful, full of dull talky stuff, a character who is meant to be a likeable Lad but is a sex pest creep and ugly art.

Transformation notably makes Circuit Breaker look more naked than usual by accidentally colouring her sellotape in pink on the image taken from the main strip. Which is enough to distract you from the winners of the Robocop competition in the sidebar. 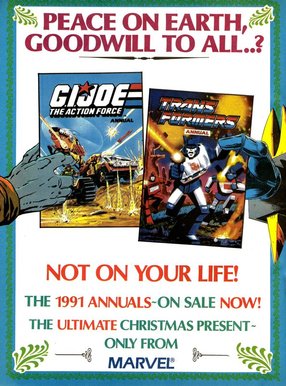 The perfect gift... for four days earlier.
With Christmas over, Combat Colin decides to phone Dr Peculiar for help with the demons, which lets Peculiar pretend to be helpful rather than the cause. Using a handy dimensional portal that’s better than the bus to get to “Flyzip Avenue” (!) he successfully sends then back to their home dimension, though his bottom gets burnt in the process. Most of the humour here is visual, with lots of fun to be had from the demons and our heroes fighting in an OTT way.

Blaster gets a letter from Martin McClurg of London casting doubts on his nucleon explanation from issue 300, which lets the Autobot set the record straight by saying that he was still in a space travel decompression chamber at the time and a fiendish stubbie made all that up from the back of a toy box. The real, Hydrus Four, based Action Master origin is coming soon.

Martin also suggests Blaster tries writing in blue rather than dull black, which, after some experimentation with shade, is duly done. We also find out the least surprising news possible: That the art for Darn’N’Blast is by Staz.

The best time to run a full page advert more focused on the Transformers Annual (it has to share with G.I. Joe) is of course the week after Christmas. Well done lads. The ad for the full Marvel range is also pointlessly rerun as well. Unless they think it’s only fair to encourage kids to get the hardbacks once they’ve been heavily discounted? 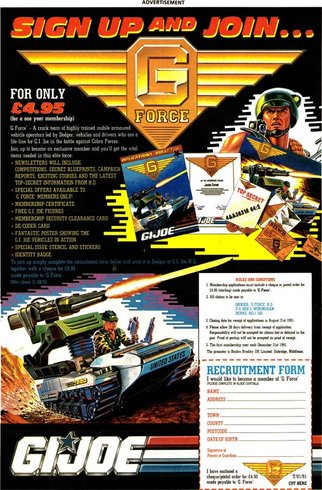 FULL G FORCE!
In the second part of the final G.I. Joe: The Action Force sees America formally come into the Cobra Civil War on Serpentor’s side in exchange for the return of the black box. Yes, no one has ever died for a typewriter, but elaborate tape recorders deserve our blood. This results in all the Joes being called in (including Battleforce 2000), though the highlight is Hawk reacting to the sight of Dr. Mindbender as if he’s the most ludicrous thing ever.

For a mere £4.95, signing up will get you newsletters, special offers, a membership certificate and free toys. But I doubt many kids would have bothered to fill in the form to find the G spot. And we still haven’t had a bloody Transformers club.

Next week: friends reunited. Though the big mysterious news is the promise of mysterious big changes for the comic... 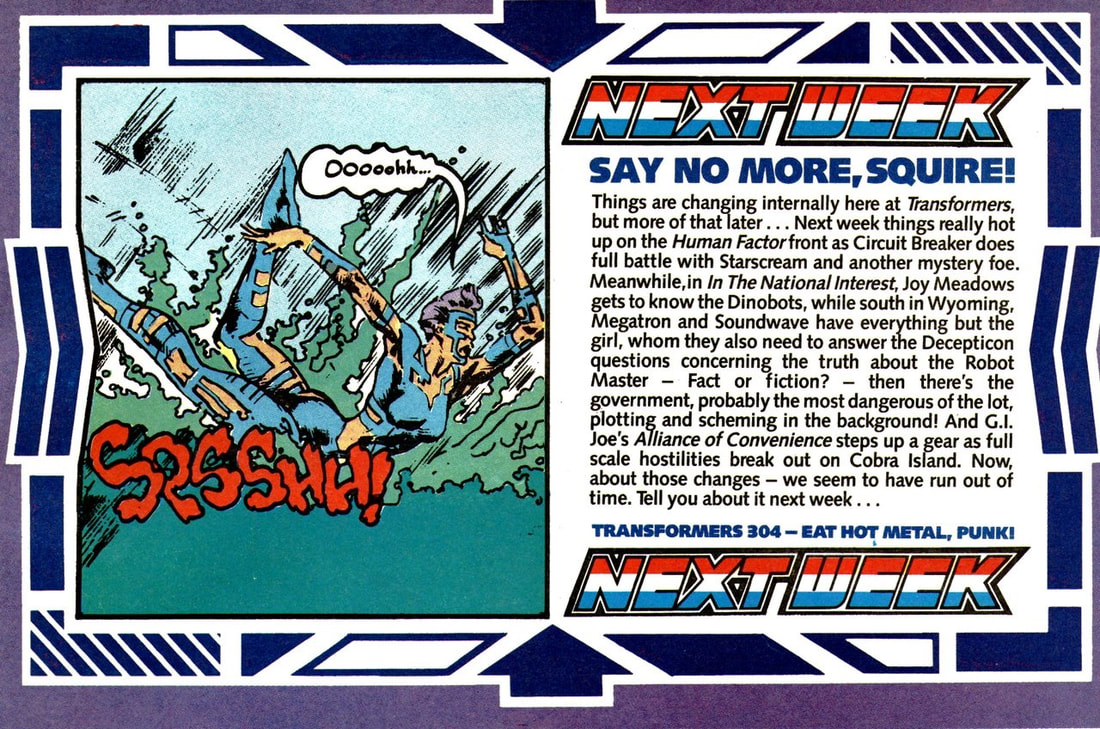 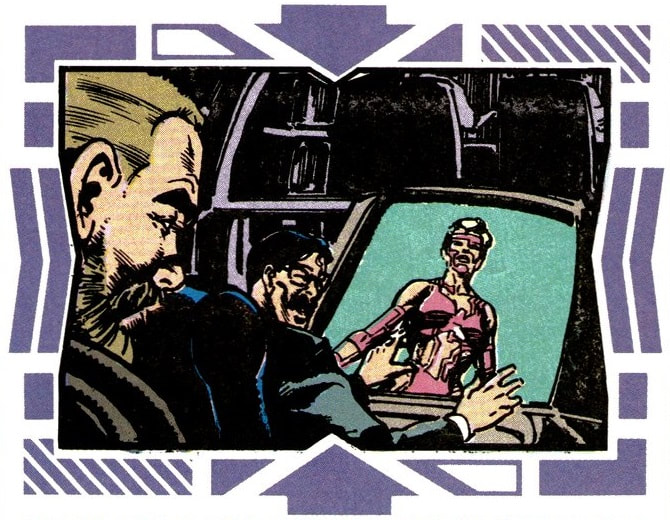