And Yes I've Been Bad, Doctor Won't Do With Me What You Can? 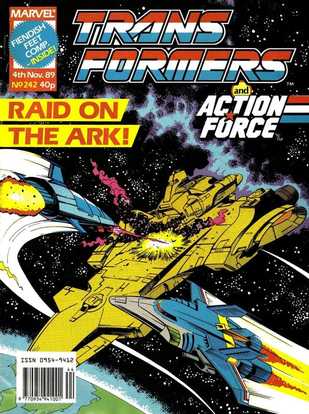 You have fallen into my carefully baited snare!

Happy New Year everyone! What a 2016 it has been. I hope you’re reading this before January 1st, we might not make it that far. Odd to think this time next year we’ll have passed the final British story.

There’s a degree of irony in the fact several of the attempts to sync up the British and American stories now they have the same author are going to fail (including the pub shenanigans a fortnight ago being slightly premature) but this issue has a completely unintended symmetry between the two stories.

That is to say, the British story features a lead villain attempting to do something audacious and failing whilst the comedy sidekicks in the American manage the exact same task with no fuss or bother whatsoever. Inadvertent comedy! 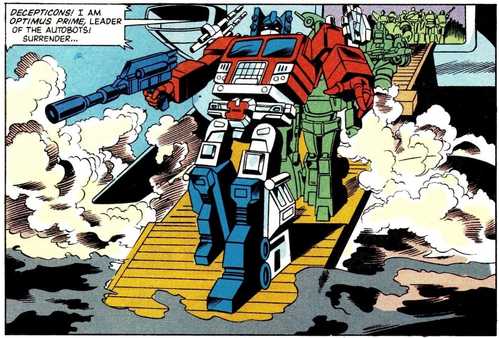 "Surrender or I'll detach my chest from my waist!"
Back From the Dead Part 3 is a hard one to judge from a British perspective as it’s building up to a punchline that’s specifically designed to work best for American readers. Before that though, the bulk of the issue is spent on set up for the rest of the story, getting the pieces into place for the rest of the arc (as opposed to Ark).

The least interesting side is once again the Earth stuff, with an Autobot shuttle (though as it’s able to carry the bulk of the Ark’s company it’s probably more of a fully fledged spaceship) arriving and the smug Micromasters declaring everything is going to plan and calling Scorponok for help as Prime disembarks whilst striking the single most Jose Delbo pose of all time, literally looking like his waist is going to fall off his hips he’s leaning back whilst pointing so hard.

Back on the Ark, there’s one advantage to the UK publication method as at least for us it’s been two weeks since we last saw Ratchet being menaced by the walking corpses of his own patients. For Americans there must have been a very strong sense of de ja vu to be seeing it again within ten pages of the same comic. 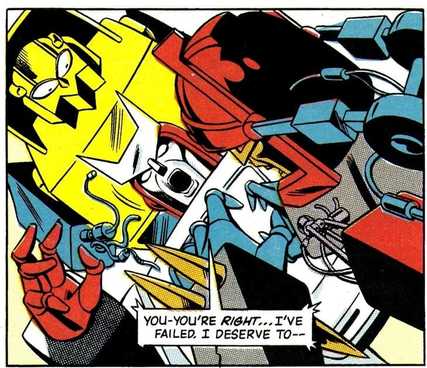 There's something very familiar about all this.
Whilst in theory the idea that he’d experience the same thing twice, once in dreams and once in real life, isn’t a bad bit of symmetry, the execution fails as there’s no difference between the dream and the reality and it becomes just the same scene done twice. If Delbo had the chance to go mad on the dream in the same way he did with Spike’s back in The Man in the Machine! there could have been a nice contrast, but the final result is basically a straight rehash and feels rather like more padding.

Ratchet does however remain a star, with both humour in him realising he’s not dreaming after stabbing himself in the bum on a sharp piece of machinery and drama in how when he realises he can stop the march of the corpses by turning of the bay’s life support, but instead chooses to let his patients kill him rather than sacrifice them. Because however the hell it is they’re up and about their lives are still more important than his. It’s a beautiful noble moment that is both perfectly in character and sets up the finale to the story perfectly.

We even get some nice comedy of the Sports Car Patrol realising their stunt to scare Ratchet and break his will has gone badly wrong and turning the whole thing off, leaving the Autobot buried in corpses as they walk in and completely fail to convince as visiting Autobots on their way back to Cybertron who were wondering if Ratchet might like to come grab some medical stuff from the old home planet. 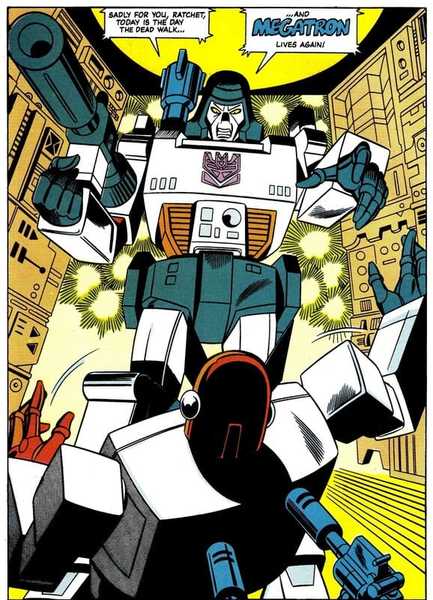 It's like he never went away.
It is of course incredibly unlikely Optimus wouldn’t have mentioned this generous offer he’s arranged when he was in the room just five minutes before, nor that Ratchet wouldn’t have been notified about a visit by four potential new patients. And it should be even more suspicious that when Ratchet tries to call Prime they’re cut off (in an event we’ll see the mirror of in the next story). But smartly Furman plays Ratchet as clearly realising this is all bollocks up not being able to pass up even the vague chance of getting his hands on the new medical equipment. If there’s a real flaw it’s that he doesn’t think to get on the buzzer to the Ark duty officer to tell them he’s off for a visit where he could have at least gotten some verification.

With just enough time to grab the three corpses with new toys out...err that were nearest (Goldbug, Grimlock and Jazz) and the immediate dropping of the penny when two (though thanks to some confusing art it quickly becomes just one) Micromasters stay behind. But that’s the least of his concerns once he arrives on Cybertron and meets the true mastermind behind everything and has a meltdown at it’s the definitely dead and not seen by anyone in close to three years Megatron!

In a part where the art struggles in places, Delbo knocks this splash page out of the park (though this being a 16 page adventure with two splash pages does add to the slightness of the story), and he’s obviously fond of the final result as he sells a recreated version as a print. And for American readers it must have been a hugely exciting shock to see the book’s arch villain back.

But of course, for us he’s never really been away and other than Prime’s brief thoughts on it two weeks ago and one caption back in The Flames of Boltax! there’s been no indication that everyone wasn’t fully aware he was alive. The reaction of Ratchet and the way the comic treats this appearance as a shocking game changer is therefore deeply confusing. We’ll talk more (a lot more) about this and the choices behind it and the attempts to patch them up over the next two issues, but suffice to say this plays very differently depending on which side of the Atlantic you’re on.

Overall, this has been a solid start for Furman in America, things petered out a bit as it went on, but it had some great imagery and wonderful moments for Ratchet. As with the recent first issue of Lost Light it’s a solid foundation rather than the author at their peak, but it still works well for the most part.

Delbo’s art feels more rushed this week, as if he ran out of time at the end and just threw it all at the final splash. 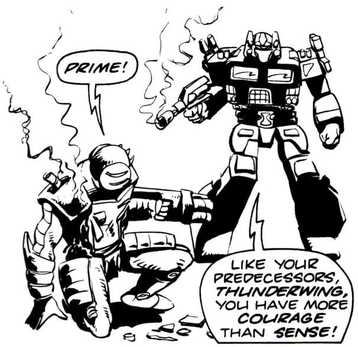 Thunderwing in a nutshell.
In the black and white section, Assault on the Ark! is probably the least consequential “Serious” monochrome story yet. Thunderwing attacks the Ark, totally fails in his goal of getting the three Autobots, is allowed to run away because he’s so completely rubbish and somehow still gets made Decepticon leader despite all this. Because it seems doing really stupid things repeatedly and attacking your own troops is fine as long as you listen to Ruckus in the end.


The main highlight here is one of the more inventive homages of the many we’ve seen to Transformers: The Movie over the years. Based on the “Hot Rod gets Optimus killed” moment, this sees Thunderwing get the drop on the Autobot leader because Nightbeat gets in the way to apologise for this being all his fault. Hilariously unlike the film there’s no “That’s Prime’s fight lad” attitude from the other Autobots and they all save Optimus by shooting Thunderwing in the face.


It’s also interesting for feeling like a dry run for the first Furman/Wildman collaboration on the American book, with the opening scenes aboard the Ark of the Autobots relaxing in the eye of the storm being basically identical to that which will start...well Eye of the Storm! It’s also nice how blasé Nightbeat is about Thurnderwing having survived in the face of Siren’s complete shock. Otherwise though, it’s the definition of mediocre and does serious damage to the character of the new leader that will haunt the rest of his character arc through to the next time he attacks the Ark.


The main fun comes from imagining if both stories had wound up happening on the same day, with Thunderwing leading his massive assault on the Ark to grab Nightbeat, only to find no one there thanks to the Air Strike Patrol. 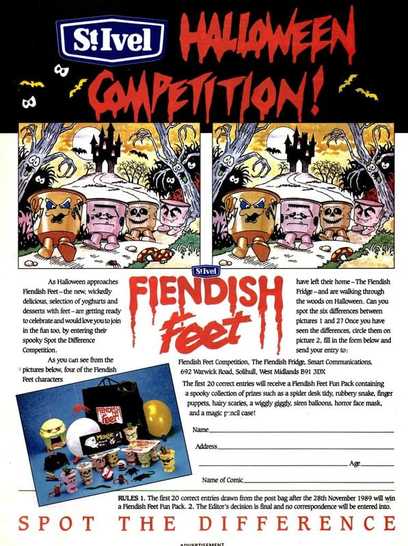 Fiendish.
Transformation is very excited by the Fiendish Feet competition in time for Halloween on page 9. These yoghurts are basically the poor man’s Monster Munch and the prizes are various pound shop horror goodies. The editorial is also apologetic for the fact the November Classic Covers Calendar won’t be appearing till the month is a week done.

Combat Colin sees Professor Madprof (and his sidekick, Moptop) invent the literal Bomber Jacket. Sadly his attempt to get the drop on Colin backfires when the bomb he drops lands in the new Combat Hat that Colin and Steve are stretching out to the right size and goes “BOING” back up into the air to badly injure its inventor. It’s a lovely gag, with a great surreal moment of Lew Stringer drawing in a random monster into the corner of one panel just for the fun of it.

Action Force sees the Madeupcommies put fire down the sewer, with Outback surviving thanks to advance warning from fleeing rats. It’s actually not a bad little action scene, but it feels much briefer than it really is.

Dread Tidings (which Transformation has become a little obsessed with the placement of, this week it’s delighted it’s on page 22 two issues in a row) sees two contrasting letters on the new format. A positive one from C. Cork of Ireland praises the black and white stories (whilst pointing out the reprint credit in issue 232 incorrectly had Will Simpson on art rather than Jeff Anderson) and is generally very positive.

Kevin Barron of Driffield on the other hand (who apparently even today provides a lot of letters for Panini’s current Marvel reprints) comes to bury the book, not to praise it. He even goes as far as to say the problems really started with the introduction of the Headmasters and the real issue is there are just too many characters by far. He then proceeds to create IDW’s Spotlight comic 17 years early with the suggestion of a new separate comic focusing on just one or two characters an issue. This gives us our first indication of the new direction the black and white stories will be taking in 1990 as Dreadwind assures him there will be a string of stories doing this with the old favourites in the new year.

Next week, the reason the black and white stories will be moving away from connecting with the American as continuity gets very odd. 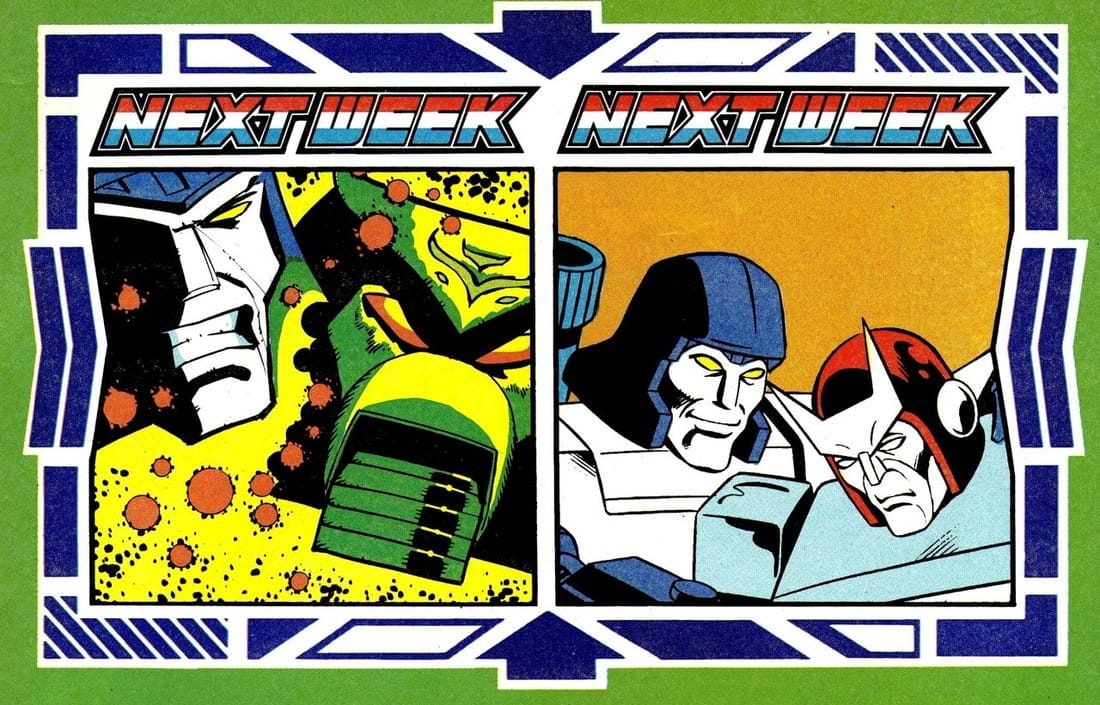