I’m a Sailor Through and Through, Nothing Nautic I Can’t Do, Though I’ve Hardly Ever Been to Sea. 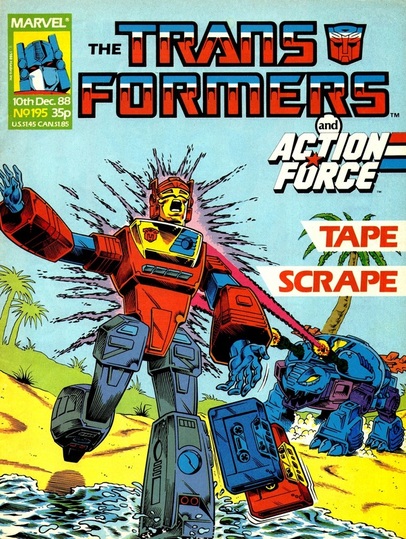 Thank you for coming, humans, and please...visit us again.

However drawn out Uncle Bob’s retirement from writing the American book might wind up being, we’re still approaching the end of his tenure and that means we’re starting to see some important “Lasts” from him. The concluding part of Club Con! is in particular notable for being the last time Blaster—who has effectively been the Budiansky’s lead “Good” Autobot (as opposed to Grimlock’s anti-hero bordering on outright villainy) for nearly two years—will play a major role in an issue. He’ll play a supporting part in the rest of the Underbase and Furman will occasionally use him in his TV persona, but we’ll never see him again so front and centre.

This means he gets to run through all his main Budiansky character traits for the last time. Though there’s sadly no mention of his Dead Best Friend, he continues to be short with Jesse (though he does acknowledge her help in the end), has little interest in actually rescuing Buster, is disparaging to the Seacons even as they best him and—in a rather fun subversion of typical Autobot behaviour—is more annoyed with a human child who wanders into his pitched battle than desperately concerned for their safety. Blaster’s poor man’s Wolverine routine grew tired pretty rapidly after his introduction, but he’s well handled here and it makes for a fitting finale for this version of the character.

The plot itself takes a turn for the serious, making the story as a whole feel akin to The Jem’Hadar episode of Star Trek: Deep Space Nine, a seeming throwaway comedy instalment that suddenly becomes a darker adventure that’s actually kicking off a major storyline

Pleasingly it’s Jesse who takes the initiative after seeing the Seacons, putting Blaster in a waterproof bag (to his incredulity as he insists he doesn’t get rusty) and diving back down to the secret entrance she saw the Seacons use. Wildrider continues his bang up security work by failing to notice Jesse having a loud argument with her tape recorder as they walk past him.

Once inside the SPACE island, we avoid the usual problem of humans wandering around Transformers scale buildings (in reality it would take you hours to walk across a room) by there only being one human sized door in evidence, cutting short the search for Buster. This also plays into coming up with a convincing reason for Blaster not rescuing the boy: Blaster could break the super strong chain holding Buster in place, but only in robot mode and the room isn’t large enough for him to transform. 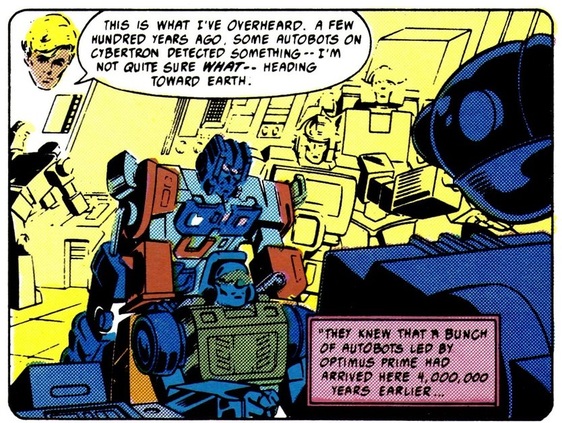 OK, maybe there was another Sunstreaker in a mind crystal, but what's Defensor's excuse?
It’s a pity some of the logic here has been well thought through when other aspects are rather slapdash (as opposed to Slapdash), as Buster’s explanation as to the thinking behind Club Con doesn’t stand up to even the slightest scrutiny. It seems that Ratbat decided the Decepticons needed a cover for their treasure hunt (more on that in a second) to stop the Earth authorities attacking them, hence both the holiday camp and “King Buster”, as apparently no government would attack an sovereign nation with a legitimate human ruler (!). Considering that the island hasn’t been troubled by humans since the start of the year and the Autobots only learnt of the whole escapade from the TV adverts it’s fair to say all this cunning plan has achieved is to give themselves away.

The treasure hunt side of things is even stranger. 400 years ago the Autobots on Cybertron discovered something (the exact nature of which is being kept a mystery for the moment) was heading for Earth and sent the cassettes Raindance and Grandslam—in what may well be the least enthusiastic bit of toy promotion Budiansky ever did as all they do is sit there in tape mode—to the planet to warn Optimus Prime of it. However, their ship crashed and the two Autobots wound up in a pirate treasure trove that sunk to the bottom of the sea and laid there ever since, before Ratbat started looking for them and their message.

Now, even ignoring the problems I’ll discuss when summing up the art, this makes no real sense. The Autobots knowing Prime was on Earth and in a revivable state is a massive, massive retcon, as if the fact it’s only seemingly this mysterious something that inspires them to send a rescue mission for their greatest hero. They also don’t seem to give enough of a fuck to ever try again. There’s also no attempt to explain how the Cybertron based Decepticons learnt of this, nor how they worked out the final fate of the tapes. Plus, Blaster was on Cybertron at that time (and the characters in the flashback who could have been there--Beachcomber and Perceptor--were part of his team), but all this is news to him.

Luckily though, this is followed by a rather neat sequence of the smug Seacons trying to present the tapes to Ratbat, only to find that Jesse has (again, much to Blaster’s annoyance) half inched them when they weren’t looking. It’s also worth noting that despite having been called Jawbreaker in every previous appearance, Overbite keeps his American name here (and on the Transformation page). 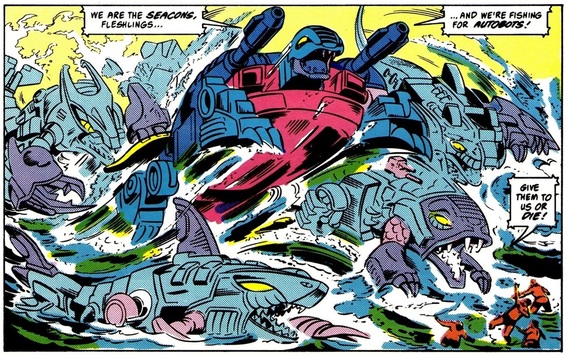 Actually, they're looking for a human at this point...
Back on the surface this leads to our big action scene as the Decepticons—who have put a huge amount of time and effort into maintaining a cover so as to avoid unwanted human attention—decide the best way to find the human who took the tapes is to attack everyone. Blaster—because he’s the best there is at what he does—actually manages to make the Seacons look rather pathetic until the aforementioned small boy mistakes him for a giant toy in a gag that doesn’t really make sense (a child probably wouldn’t mistake a rampaging grizzly bear for Winnie the Pooh) but is a rather fun bit of meta commentary. The distraction causes Blaster to take a nasty hit, so he literally coughs up the tapes so as to stop any future human threatening carnage.

This leads to a slightly odd ending. With their cover now blown and their objective achieved in finding the tapes there’s no need for the Decepticons to maintain their pleasant holiday resort pretence. But instead they let the now panicked humans leave in droves with a cheery goodbye and hopes they’ll come back soon. Rather than say, killing all of them to make sure the human who helped the Autobot doesn’t get away (you have to assume the Seacons didn’t recognise Blaster, or they’d have known his shrinking power and at least thought to search hand luggage).

Still, this is overall a strong conclusion despite some serious niggles, setting up a nice mystery over the message on the tapes and combining some decent action with deft humour. On art Delbo manages a more mixed bag. The fight with the Seacons is easily his best realised action scene to date, but his random use of character models (though that’s something that could perhaps be more blamed on vague scripting from Budiansky and poor work on the part of the editor) sees Defensor and Sunstreaker hanging about on ancient Cybertron.

As well as the last major role for Blaster, this is also the last time we’ll be seeing Jesse as well. As a character she’s often been handled poorly, frequently leered over and treated as more an appendage to Buster than a person in her own right (something that probably reached its nadir in Second Generation! where she is just standing there with nothing else to contribute). However, right at the end Budiansky gives her a strong dynamic and funny personality that actually makes it a shame she won’t be seen again, especially as we won’t get to see her reunion with Buster. 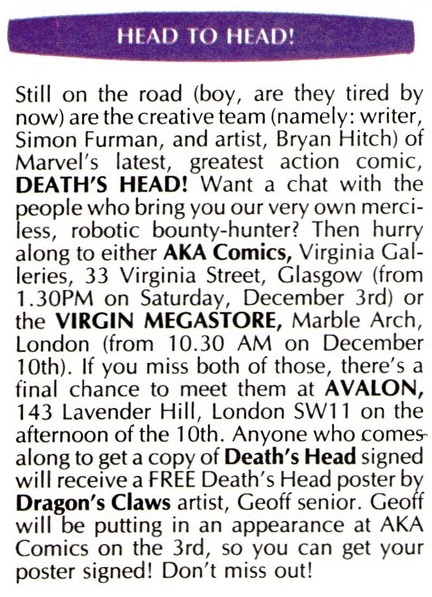 Who would have thought Transformers would outlast Virgin Megastores?
Transformation continues to promote the Death’s Head tour, which finally concludes in London with two signings on the tenth of December at Virgin Megastores (perhaps former guest star Richard Branson dropped in as well?) and Avalon comics.

W also get another lengthy letter—this time from Andrew Dornan of Fareham—really laying into how bad the American stories are, citing Big Broadcast of 2006 as a prime example (though being very careful to exclude the new UK created pages). The most damning critic being “Recently the American stories have been going from just action and nothing else to babyish”. As before Dreadwind is at pains to point out both UK and US series are part of the same wider tapestry, but equally as before it doesn’t sound entirely convincing. Amusingly when Mark Clapham of Harrogate writes in to slag off Visionaries, Dreadwind doesn’t even make a token defence of that series.

Action Force starts a new story, Jungle Moves, but not a huge amount happens other than Hawk asking Scarlett if she wants to go rescue Snake Eyes. Really, they wouldn’t be having this trouble if they’d just sent the more capable Flint in the first place.

AtoZ returns after an absence (possibly related to the forthcoming UK reprint of Universe?), covering Long Haul and Menasor in all their glory. Combat Colin also returns, insisting he and Semi-Automatic Steve need to get themselves into peak physical shape before going on Combat Patrol. After an extensive training session Colin then decides that what they really need is a sleeping exercise first...

What’s most notable about the Next Week box is the text seriously downplays the big selling point of the American issue it reprints—the presence of Megatron. That’s something we’ll see more of in the issue itself. Join me next Friday as Spike takes a trip on Ratbat’s holodeck... 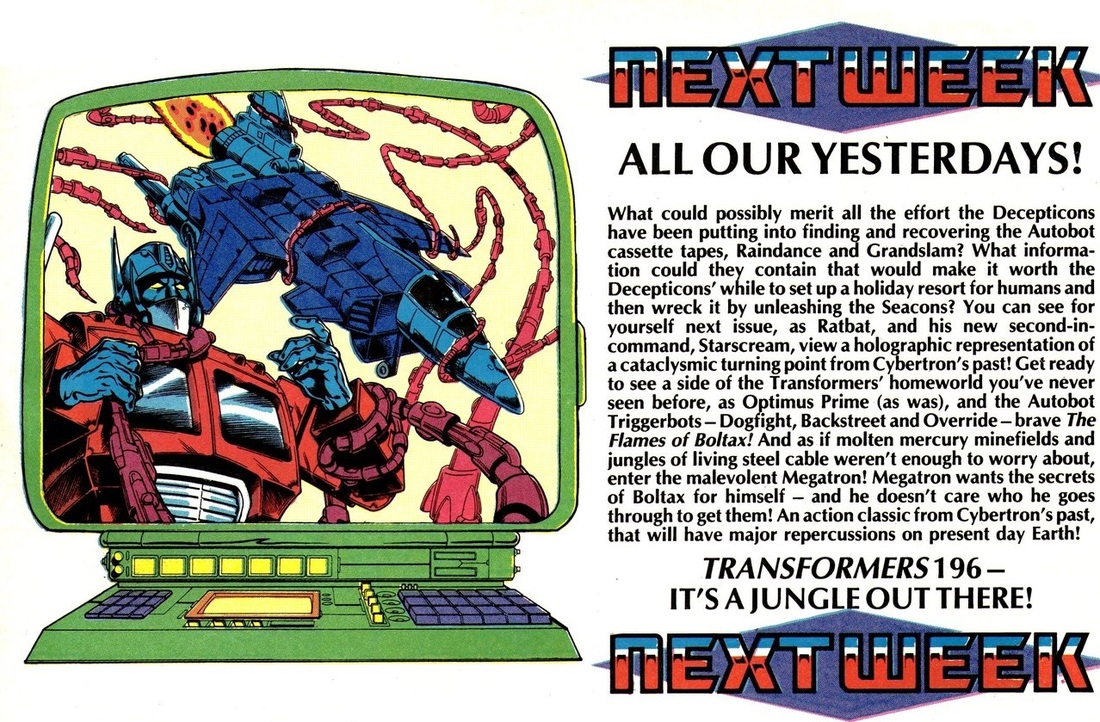