Bring it, Bring it on Now. 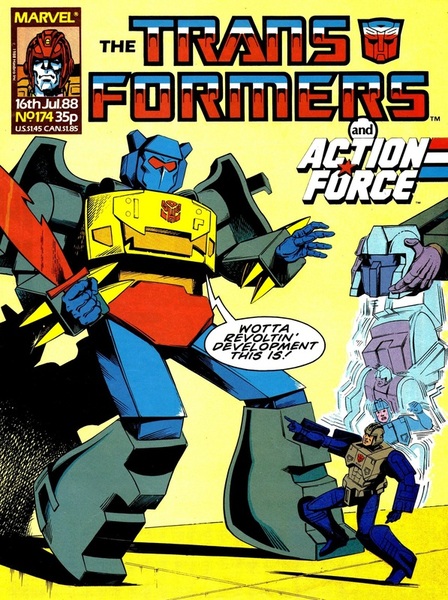 After his comments on the letters page last week, here we have a cover where Grimlock's shocked reaction to Spike Witwicky seems to be channelling Simon Furman's own views on the new gimmick toys, "Wotta revoltin' development" indeed. This is not the only place in this issue where you feel the British writer/editor is feeling snowed in with the increasingly desperate attempts to keep the toyline going.

Inside of course, we have a story that would likely induce similar sentiments from his American counterparts. This is the first real Big Battle story Uncle Bob has attempted, and though it's on a smaller scale than Furman has given us in The Legacy of Unicron!, even this first half gives us more named Transformers on panel than any other story to date. This is to a certain extent an inevitable consequence of the ever growing cast--sooner or later someone would do the "everyone together" plot and now the floodgates are open we'll be getting several more before the book ends--but it's also a slightly desperate attempt to try and do something with the unwieldy number of characters. It hasn't quite occurred to Budiansky yet that he could use this sort of story to kill off the older toys and thus free up space, but by the next time he does something like this that final piece of the Big Character Mesh Up will be in place.

This is also the first Bob story since the Return to Cybertron arc to focus almost exclusively on the Transformers with only a minimal human presence. In that case we got one of his strongest, most dramatic stories. Here we instead get one that is wildly uneven, with the strongest moments being the delightful comedic ones rather than the attempts at drama.

Part of the problem is simply that it's been a ridiculously long time since any of these plots have been touched upon. That's not all Bob's fault as we've just come off the back of two and a half months of British stories, but equally (as Transformation rather sheepishly reminds up) the Blaster/Grimlock plot has been ignored since issue 144 at the end of 1987. That's more than half a year and several Budiansky issues where this side of things has stalled, meaning the momentum has been well and truly lost here. 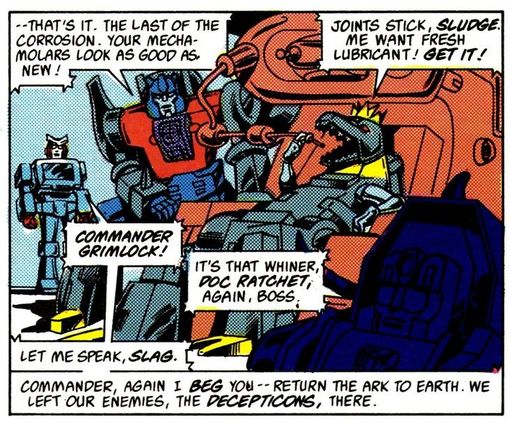 This at least is awesome work from Delbo.
The issue does however open with an excellent bit of fan trolling. We've been teased with the return of Optimus Prime for several weeks now, so starting with a homage to the original explosion of his body as the Steelhaven science team fail to make him a new form (you just can't trust that Brainstorm) is a rather fun bait and switch. It's also hilarious that the reason they can't make Prime a new body is because they've wasted their resources rebuilding Goldbug (the other Throttlebots are a long way down the list) and making the Pretenders. Now there's time well spent.

What follows is straightforward and--in pure plot terms--fairly uninteresting. The Steelhaven finds the Ark and attempts to team up so as to use their equipment to recreate Optimus, Grimlock is a bit of a dick about it (especially when he meets Spike, perhaps Bob disliked the gimmick as much as Furman), challenges Fortress Maximus to a fight he can't possibly win as he's still recovering from being shafted, so Goldbug persuades a grumpy Blaster to take his place. Meanwhile; Ratbat's Decepticons discover the Autobots about to have a smack down on the moon.

The problem is that the entire Grimlock plot has been extended at least a year beyond its natural endpoint, making it very hard to care about either the pathetic whining Autobots who have put up with this for so long or who is actually going to win this leadership fight. The potential revival of Prime is more interesting, but it's basically set up for the story we'll be getting in two weeks (his floppy disc stays behind on the ship with Joyride, Getaway and Slapdash. I wonder what will happen to all of them?) rather than an essential part of the plot in its own right. Blaster, having spent over six months locked up in the VVH, is initially bored and fed up with the entire thing and it's hard for the reader not to feel the same.

As said though, there's a lot of intentionally funny stuff here. Grimlock's shite leadership may have ceased to be entertaining, but his continued put downs of Fortress Maximus (including repeatedly getting his name wrong) is lovely, and little moments like having Snarl straighten his crown whilst declaring the boss is "beautiful" can't help but raise a smile. 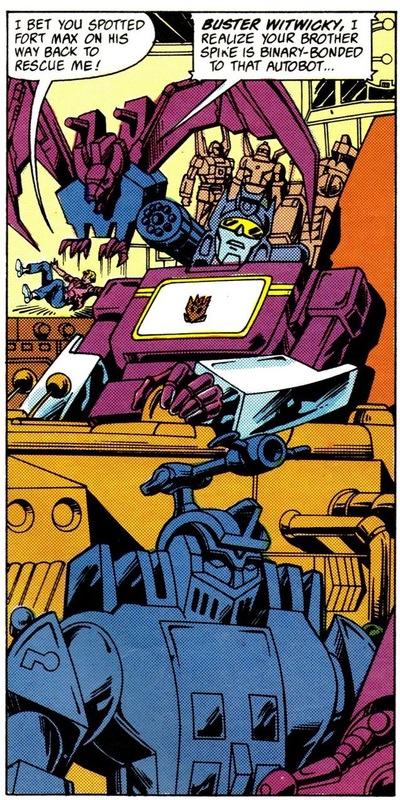 Leaning backwards...mouth on Soundwave. If he were pointing as well this would be THE Delbo panel.
Goldbug's rather bashful reluctance to meet up with Grimlock because he hasn't told the others about how he's a wanted bot is rather fun as well. I bet they wish they hadn't wasted their resources rebuilding him now. It's also a nice touch that the trial by combat Grimlock invokes is noted to be archaic and that no one actually pays it any attention now as too often aliens in science fiction go along with these old rituals without even batting an eyelid. It's just a shame Maximus didn't simply say "Piss off" before having everyone jump on Grimlock.

The Decepticon side of things is only a page, but Ratbat continues to be good value as he's first smugly rude to Buster and then gleefully excited at the idea of all the Autobots being lined up neatly in a row.

If you're a kid though, the real appeal is in seeing all the Autobots in one place at one time, even if the real action won't kickoff till next issue. That makes this the most important issue Jose Delbo has yet worked on as the success or failure of it rests entirely upon him. It's telling that, though his memory is vague on many of the details of his time on the comic (in the talk I saw he had to be reminded of Fortress Maximus' name by Nick Roche when trying to recall his favourite character) that Delbo remembers very well the ball breaking work that had to go into this story in terms of fitting everyone into it.

It's hardly surprising therefore that the work is fairly basic, everyone is present and correct and it conveys the story in a perfectly acceptable way but there's little passion or excitement in the resultant work. It does what it has to do and little more, it's easy to sympathise with this but it's not even as pleasingly bonkers as Dan Reed's work on similar crowd scenes in Legacy of Unicron! We do however get the very first example of what will become a Delbo trademark: Soundwave with a mouth as per his inaccurate Transformers Universe profile. There must have been a faceplate character model as the other artists have used it, but it seems Delbo has only been given the comic series to use as reference. There will be many fine examples of him cheerfully using these models during the rest of his tenure. Frankly he's clearly having much more fun with the mad Grimlock stuff, coming up with some memorable imagery of him sitting on his throne in t-rex mode that nearly breathes some fresh blood into the concept.

It goes without saying that, upon being presented with such a mammoth task, Nel Yomtov pretty much raises a white flag, resulting in barely a panel without block colouring on it, this rather ruins the impact of the money shot of all the Autobots coming off the Ark.

The other thing to note about the lead strip is the alterations made by the UK team. First, and perhaps most notably, the title has been Anglicised. Amazingly, considering how many words are spelt differently by Brits and Americans, this will be the one time this happens. Secondly, Skids has his head changed to effectively turn him into a different character when exiting the Ark. Considering he's in the background and barely a scribble, Furman would likely have gotten away with leaving this be. The fact he didn't shows a level of commitment to making things fit we'll be seeing more of next week. It can be seen at the bottom of this piece. 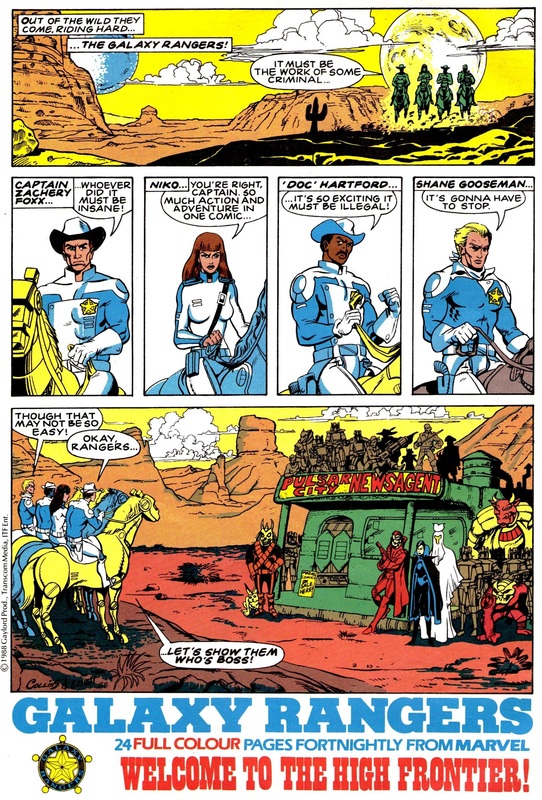 The baddies were only trying to find Dragon's Teeth.
As well as having to try and remind readers of things that happened the previous year, Transformation has to explain that the comic it has been promoting for weeks as Dragon’s Teeth is actually called Dragon’s Claws, and only after two issues have come out. It dances around explaining the reason for the name change (there was already an obscure indie comic with the former name and attempts to buy the rights to use it failed), but that’s a marketing fail that likely did the book’s chances of success little good. With all of that the actual main selling point of this story—the cast of “hundreds”, is relegated to the bottom of the sidebar.

On Grimgrams Philip Bowen from London writes in to suggest toys based upon what the characters turned into on Cybertron, inspired by Will Simpson’s good work on designing a pre-Earth look for Swoop in the last Annual. Tellingly Grimlock/Furman’s response is to be depressed that people want even more Transformers. Ironically Furman will be responsible for making Cybertronian modes a more sustained thing than the odd efforts of the Marvel comic and original cartoon when he authors the first War Within miniseries for Dreamwave in the early 21st century. And yes, there will be toys.

After what feels like a lengthy absence, AtoZ returns with Jazz and Jetfire, that’s rather appropriate for a story that brings old characters like these back into the action.

Action Force starts a new adventure, Pit-Fall, which sees some US generals tour the Pit; whilst only one of them believes Cobra is a real threat the others want Action Force shut down. One of them might be an Admiral rather than a general, there’s some subtle hints in dialogue like “It’s always better to batter down the hatches at the first sign of a blow”. Wise words. The rest of the plot is concerned with Flint sexually harassing Lady Jaye and Cobra being able to drive at the Pit because of the stupidity of putting in a base where most of the staff don’t know the truth and thus don’t think there’s anything odd in people going to the “Motor Pool” after it has been shut down.

Surprisingly, Combat Colin is the most violent part of the entire issue as Colin uses a thermonuclear device to kill Mr. Magno and in the process destroying the entire town (it seems Colin and Steve, like Batman, are immune to nuclear explosions). This gag at the gratuitous collateral damage caused by action heroes is nicely done, especially Steve’s expression as they stand in the rubble.

After comics for Dragon’s Claws and Transformers itself, the newest one page promotional advert is for the Galaxy Rangers comic. The Rangers have heard their comic is so good it should be illegal, but on the way to the newsagents (to, erm, stop anyone buying a copy?) they discover all their enemies outside waiting to twat them. If that’s the sort of reception every potential buyer received this may have the best excuse for its eventual cancellation than any of the other Marvel UK books of this time. Unlike the previous ones, the piece of PR fluff is uncredited, but the art looks like Lee Sullivan to me. Sadly there’s nothing akin to Peter Pez SPACE Policeman this week.

Oh, and my book is now available from The Book Depository as well. 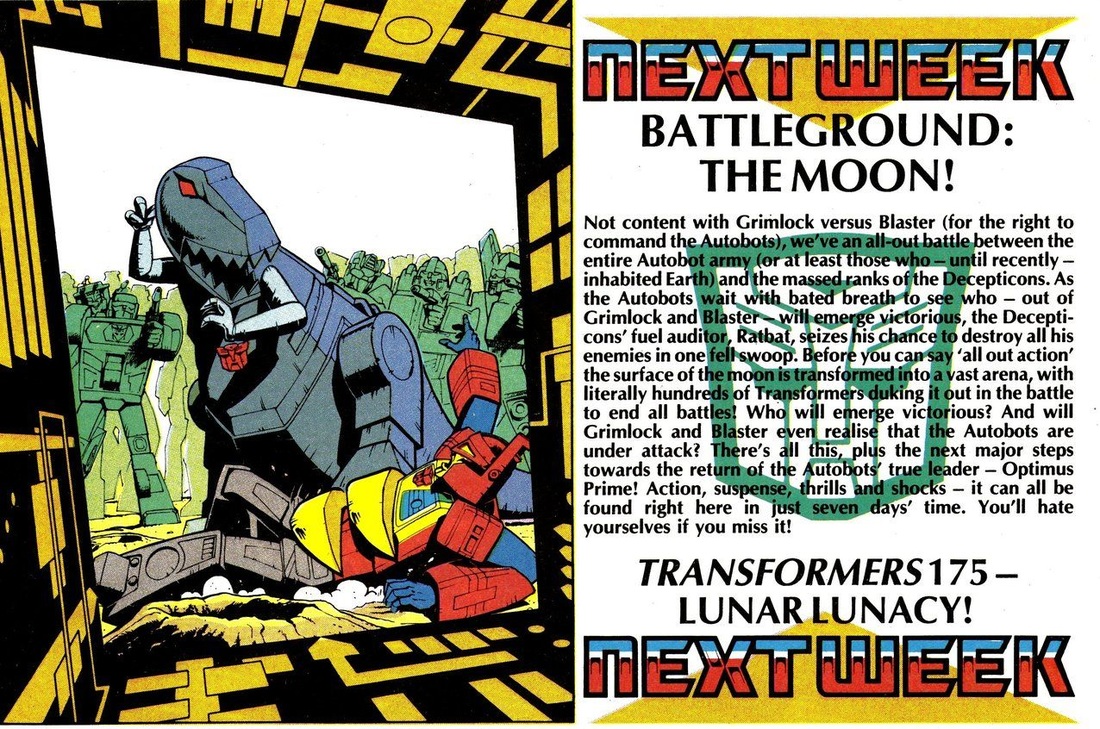 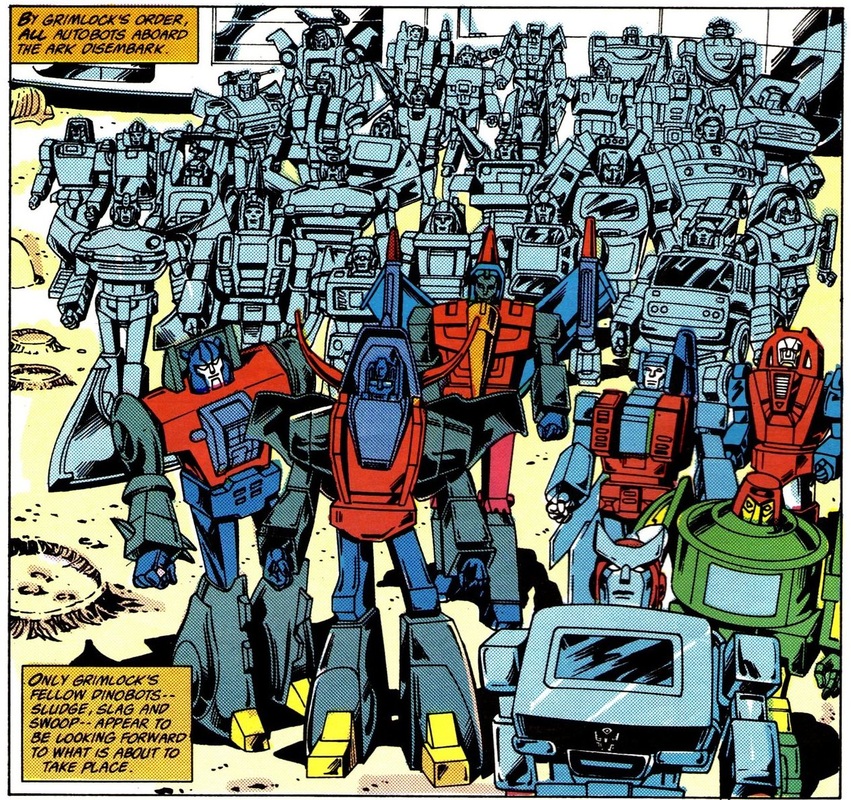 "Everyone stand in their character model pose!"