It's Going to be a Hot Time in the Old Town Tonight. 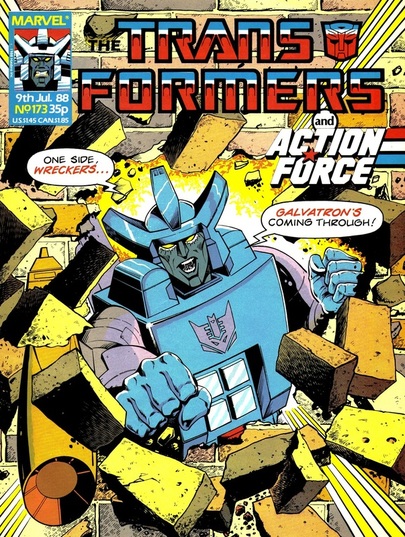 Your leader has found the chunk in Cyclonus and Scourge's armour--their stupidity!

It's fair to say the original Transformers comic is not generally thought of as an artist led book. We had Barry Kitson being given story input to try and keep him on the title way back in Robot Buster! and Geoff Senior was very much The Man before his departure at the start of 1988, but generally the high turnover of artists means none of the others have had the chance to indelibly imprint on the book in the same way that, say, an Alex Milne does today.

That makes the second part of Wrecking Havoc something of a rarity in that, as an issue long fight scene, it's effectively a showcase for the talents of Bryan Hitch in his last work on the book. I'm not sure at what point it was decided to make him the regular artist on Death's Head, but the feeling here is of an audition piece designed to let him flex his muscles and show what he can do. If this were the case, it's an audition he passes with flying colours as the end result is some of the most stunning and dynamic art we've yet seen on the title.

Indeed, it arguably shows the sort of work Hitch would become famous for better than the generally lighter and funnier Death's Head will, the scenes here of titans fighting their epic battles in the ruins of a town they've wrecked in pure proto-Ultimates. Every bit of action--my favourite being Springer using two (gloriously out of scale) cars as ear mufflers on Cyclonus-- is expertly handled with memorable moment after memorable moment. Hitch also excels at expressions; Springer's gritty determination, Galvatron's smug incredulity at the Wreckers and even Sandstorm's hurt face as the humans he's trying to shepherd to safety as they run in panic are all completely on song. This is basically a masterclass in comic art from a sickeningly young talent. 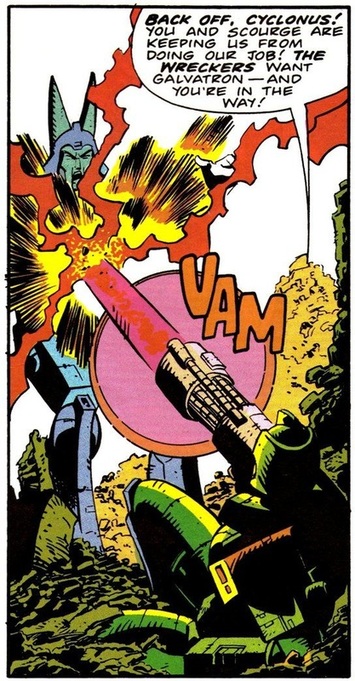 "You call Nightstick a gun? Now this is a gun!"
However, the best art in the world wouldn't matter if the story itself wasn't up to scratch. There are perhaps a couple of examples of Furman relying on a Terry Nation style recycling of ideas--the humans running from the helpful Sandstorm is a retread of a similar moment with Brawn in Devastation Derby! and Galvatron's commentary on the ludicrous nature of the Wreckers as he bitch slaps them is in the same vein as his treatment of the Seacons (Springer's reaction to Nightstick also firmly establishes a new trend after Galvatron's similar moment last week of characters being confused as hell by Targetmasters)--but even these are handled in a fun enough way so as to make them enjoyable.

The main bulk of the plot is actually a fresh take on the Transformers action scene. Many times in the past we've had characters, usually Optimus Prime, wax lyrical on the need to protect humans from their war. We've seen the implications of this on a smaller scale in stories like Dinobot Hunt!, but here for the first time we have a large scale battle wreck a densely populated area with a direct acknowledgement of the inevitable massive death toll. Springer manages to save one human trapped in a building, but is very aware that many more must be hiding in each building into which he is thrown. This gives a tension to every page, both in terms of the risk to innocent lives and from the fact the Wreckers have to hold back in their efforts to stop Galvatron.

This last aspect is an especially nice touch; Galvatron is insanely powerful but shouldn't be so invincible that the combined forces of the Wreckers couldn't stop him. The constraint on them devoting all their efforts to the fight is a nice, plausible way of letting Galvatron escape whilst at the same time letting Springer believe they would have won under fairer circumstances. This will be especially important come Time Wars where Springer's entire, disastrous, strategy will be based on the assumption Galvatron alone is someone his people can beat. 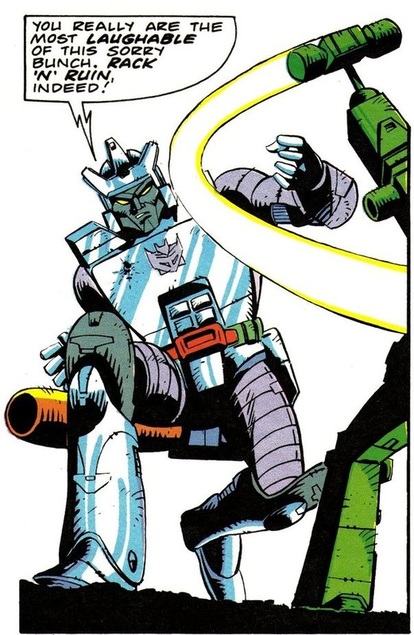 After two years, someone finally asks what the fuck Rack'N'Ruin is.
Speaking of strategy, the impossibility of beating Galvatron in such an environment means Springer has to do some smart thinking on his (jumping) feet. He's helped here by a rather clunky piece of writing as Galvatron feels the need to loudly explain why Cyclonus and Scourge are after him, but this allows the Autobot to improvise a plan whereby he simply pretends to steal the time trigger device, causing Cyclonus and Scourge to chase him as he does his Gummy Bear impression out into the countryside.

This then gives Galvatron the chance, possibly one of the last chances for the original Galvatron as he’s about to start down a slippery slope to—as psychologists call it—losing his shit, to show his own smarts as he cheerfully explains to the other Wreckers that once Cyclonus and Scourge catch Springer he won’t last five minutes alone, so do they try and take him down or go and save their leader?

Of course the Wreckers chose the latter, adding to the bad day of Galvatron’s ex-lieutenants as first they realise they’ve been tricked by Springer and then are forced to run away very fast. They’ll flee to Shockwave, and we’ll see how well that goes later in the year. This issue ends with Springer vowing that next time Galvatron’s head is theirs. Unlike Magnus’ similar boast at the end of Salvage! we will get follow up on this, even if things don’t go exactly as planned.

This is a rather brilliant issue, managing to be fast paced and action packed whilst at the same time full of lots of neat little character moments, with everyone bar Cyclonus and Scourge getting to have a good showing. There is nothing more wonderful in all of comicdom than Galvatron pointing out how ludicrous Rack’N’Ruin is. Coupled with some fantastic Bryan Hitch art this has been one of the most solid two parters in the entire run. 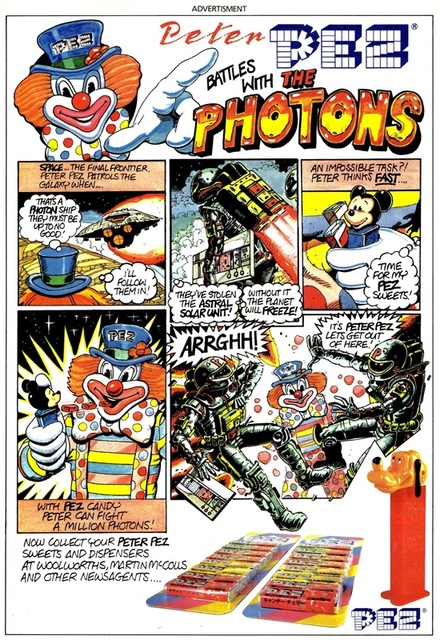 Actually, maybe "Clown Policeman IN SPACE" is a bit odder than Energy Giving Beefballs.
There’s a tacit acknowledgement of the British/American divide in Transformation as we’re told the comic likes to round off “Our batches of stories in spectacular fashion”, reminding us that the last ten weeks have all flowed into one another as a multi-part epic and effectively saying that the next issue isn’t on the same sort of level.

On Grimgrams Grimlock is clearly not terribly happy with all the new toy sublines cluttering the book as he bemoans to Leon Altham of Bury about not understating what kids see in Headmasters and Pretenders (and to be fair, most kids did agree with him, the line is well into its decline now) and wondering what happened to “Normal” Transformers. This is ironic for the leader of the first subgroup introduced in the book and—by amazing coincidence—Simon Furman will express almost identical sentiments early on in the black and white era.

Part of Grimlock’s dislike for the new toys may be down to the questions they bring, he has to explain to both Max Lloyd of Rugby and the aforementioned Leon that no, Groundbreaker and the other unreleased Pretenders aren’t characters created for the comic but toys only Americans are good enough to have the chance to buy. I suspect there were a lot of similar queries.

Action Force sees Serpentor survive an assassination attempt from Zartan and friends whilst the Pit is shut down by the government because of the failed attack on Springfield (if I remember correctly, “A.F.” are always being shut down and having to go rogue, Hama was far more fond of recurring plot devices than Furman ever has been). This final part of Snap Decisions is more notable however for the changes to the lettering to stick the words “Action Force” in and spell “Armour” correctly is done in the most appalling way possible. It literally looks like a three fingered sloth has done them with a crayon.

Combat Colin has put some clothes on (and collected Semi-Automatic Steve. Battle cry: Okey-Dokey!), but Mr. Magno simply uses his magnet to steal their belts, giving the ladies in the audience a truly sexy sight of them in their y-fronts (Colin) and boxers (Steve).

Sadly there’s no Energy Giving Beefballs this week, the closest we get to a surreal advert is one where Peter Pez—a space clown policeman—uses the power of Pez to take down some space crooks. That’s basically normal after last week.

Next week, it’s back to Uncle Bob after what feels like a far longer absence than it has actually been. I wonder how Grimlock, lover of the new subgroups, will react to Spike Witwicky?

I’m  not going to gratuitously keep promoting my book, but just for fun I’ve added a readers pictures gallery to the book shop page, if you have a copy why not join in? 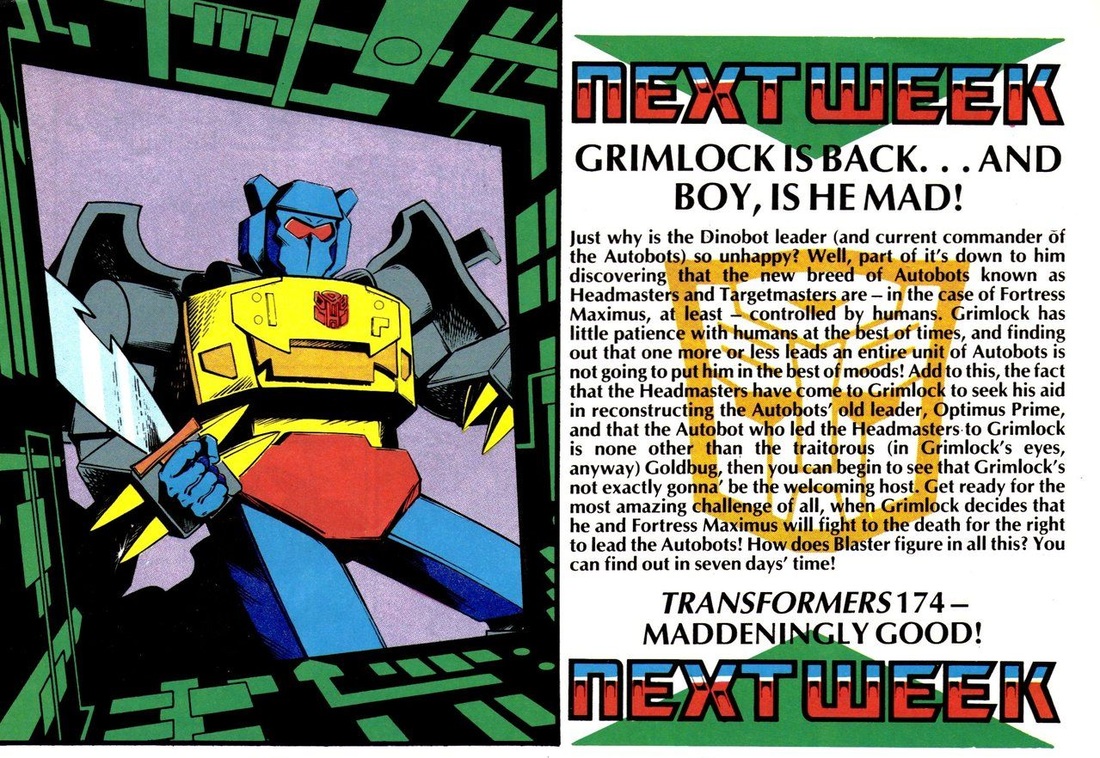