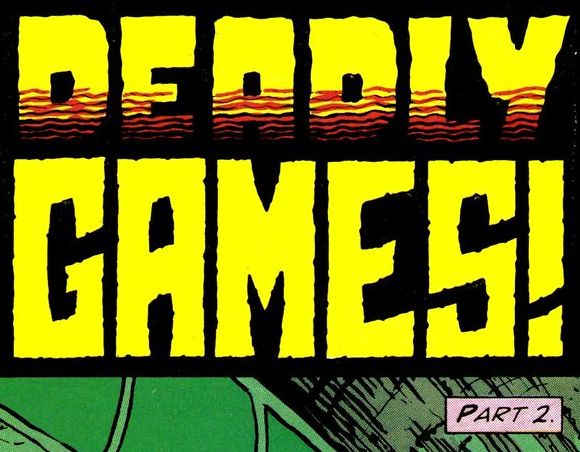 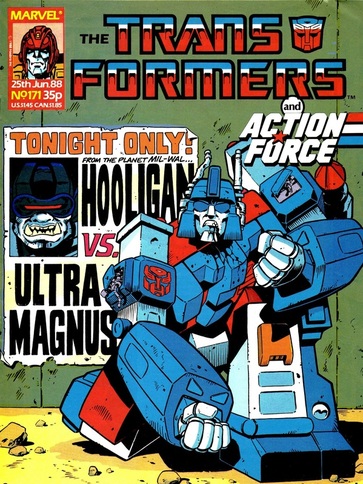 How much for that foot?

The second most famous thing about this story after being the last appearance of 20th century Magnus is the cover. With a fight poster proclaiming Hooligan to be from "Planet Mil-wal", this dig at contemporary football hooliganism apparently upset Millwall football club who sent in an angry letter (it'll be interesting to see if a letter on a very hot topic of the time gets printed or if this is an after the fact remembrance by Furman). This is surprising; after all, who thought Millwall fans could read?

The slightly on the nose satire of the cover is actually a good indication of how the second part of this story is going to have a more firm sense of direction than the first. Comedic commentary on the behaviour of sports fans is hardly a new idea, but for a story that has floundered badly for a purpose it's a more than welcome change.

So the real meat of the issue isn't the Zabra/Magnus confrontation, or even the Magnus/Hooligan fight. It's the behaviour of the spectators. Both locals and aliens (this may actually be the first story with Transformer sized organics in it, if you assumed all those we saw alongside Death's Head's first appearance were mechanoids as well) have come to revel in the bloodlust, even collecting body parts as souvenirs. It’s basically an exaggerated version of any sporting event. It sets a tone that's very much in the mood of 2000AD--not to mention the very much on Furman's mind  Dragon's Claws--and more is done to set the tone in one page than the first part managed in six.

It's a heady day for the games.
Backstage at the amphitheatre Magnus is being forced to go out and fight Hooligan or a Sparkler Mini-Bot will be shot. Though there's an interesting idea in a planet covered in war already being the perfect cover for these blood games, the most memorable moment--arguably of the issue--is a panel of Magnus having his knuckles rapped so hard they briefly become molten metal. Yikes.

Otherwise though the backstage scenes go as you'd expect: The Sparkler Mini-Bots quickly trick and overpower the dumb guard, before being left with the decision to race off in their vehicular modes and replace Magnus on the mission with the Wreckers as he has ordered, or go and help him. Hmm. I wonder what they'll do?

In the arena we get a much more interesting Hooligan fight than last week as Magnus desperately tries to persuade the robot (there's nothing to say in the comic itself he's not just a Decepticon with an eccentric design) that they're being used and should team up. Wonderfully once Magnus realises Hooligan is a dumb violent...well hooligan he just unleashes a full on ass kicking before refusing to give the crowd what they want by performing the killing blow. He does however manage to deliver an equally full on right hook to Zabra (the Decepticon guards are all killed by the Sparkler Mini-Bots in just the nick of time. What a twist!) before delivering an impassioned speech to the crowd about how killing is not a sport and that he only kills when it is unavoidable.

Or, you know, if he's in the mood to kill some zombies.

Still, this is actually quite a nice close for present day Magnus and whilst it's not the exit he should have had, it almost lets him leave the series with some semblance of dignity after a few weeks of very odd behaviour on his part. 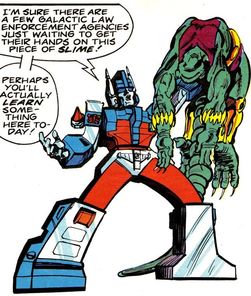 The last moment for Ultra...CHRIST WHAT'S WRONG WITH HIS LEG?!?!
The "Almost" there is because the final panel, likely inspired by the ending of the Doctor Who story Vengeance on Varos, is a gag about how none of the aliens present have learnt the moral of the week and that they'll be off to the next murderpit instead. It's a novel--for this comic--and mildly funny subversion of the usual form, but it makes '88 Ultra Magnus' very last role in the series to be the punchline to a shaggy dog story. This is a shame.

The Firecons actually get a better exit, cheerfully declaring the games have gone sour before sneaking off to better opportunities. This will also be the last time Furman writes the Sparkler Mini-Bots, they've burnt brightly but briefly as favourites but obviously their toys are no longer that new. Luckily Budiansky will give me one more chance to run that vehicular mode gag into the ground later in the year.

Though this is a much more fun and focused issue than the first half, it's not quite enough to save it and the end result is a story pretty much worthy of the shoulder shrug Furman gave it in the Classics UK interview. Despite the fact that Dan Reed is clearly having a ball with more consistent art than on the opening, this ultimately feels like a rejected Dragon's Claws story. 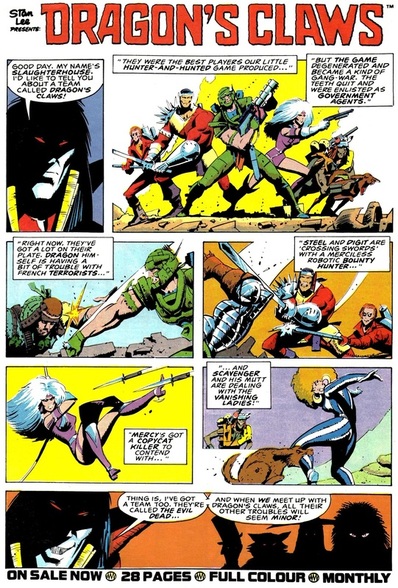 Oh, that's what the comic's called!
Speaking of which, all of Transformation is given over to promoting...err...Dragon's Teeth. Really, still? Considering this is in the build up to the release of the second issue, that shows the name change really, really, really was late in the day. Still, as well as the Birmingham visit mentioned last week, Furman and Senior will also be at the Nostalgia and Comics in Nottingham on the same day. Marvel UK are really going all out on this, which makes the name thing even more unfortunate.

With promotion for the Collected Comics of Robot Buster! relegated to the sidebar, that leaves no space whatsoever to even mention the actual contents of the comic, a rare event for the UK stories and again creates the impression no one was happy with this one.

The first ever example of Dragon's Claws being called by their correct name actually comes with the printing of the one page promotional comic I mentioned in their Addendum. It is indeed just a recap (or more accurately trailer as it's mostly moments from issues as yet unpublished) but it lets you have some nice Geoff Senior action if nothing else.

But let’s face it for every kid reading, Dragon’s Noun can go hang. There’s only one thing that will be on their minds: The advert for The Return of Optimus Prime on video. The ULTIMATE ROBOT indeed.

Fun fact: As a kid who had no idea what Pretender inner robots looked like, I assumed the video cover was specially commissioned (even if it did use characters not in the episodes), therefore I thought what is actually a stylised take on Skullgrin exiting his shell whilst screaming in triumph was actually Skullgrin infecting a clearly terrified robot with the hate plague. 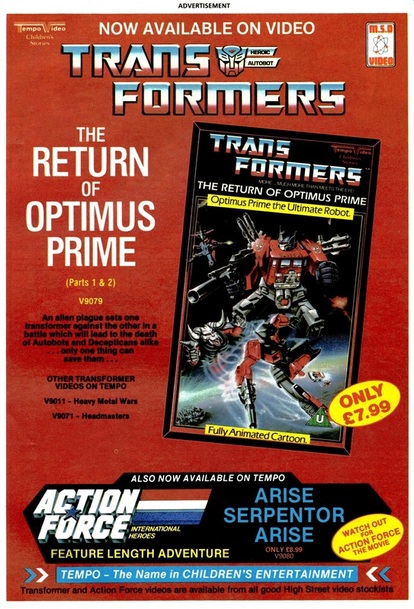 BEST VIDEO COVER EVER.
On the letters page, Paul Kinnear from Wirral asks for a serious answer to the question of why so many Transformers toys go unreleased in the UK. Grimlock actually gives him a--basically honest one even if the likely extra factor of falling sales doesn't get a mention--explaining the UK simply isn't large enough to sustain the same sort of toy market America and mainland Europe can manage. Nowadays Hasbro seem to have forgotten this and keep trying to impose the American wave system on us before being surprised when it means ranges peter out after just the first wave. Every. Single. Time.

Part 2 of Snap Decisions sees Storm Shadow infiltrate the Pit for two reasons. One is to ask Snake Eyes for a chat, but the one that takes up the bulk of the issue is to let Larry Hama show his hatred of Quick Kick for not being a ninja by having Storm Shadow easily beat the tar out of the man who dares to do kung fu.

Combat Colin begins a new multi-part adventure as his bath is stolen through the wall with him in it. We not only learn Colin bathes with his hat on, but that Semi-Automatic Steve (who gets a “Co-starring” credit in the title for the first time) is forced to hose himself down out in the garden. I'll let you decide which of those two facts is more disturbing.

Next week, back on Friday, would the Sparkler Mini-Bots have made a difference to the fight with Galvatron?

Before that though, it's Auto Assembly weekend! My pre-AA video—cunningly recorded before all the really interesting announcements—can be seen HERE.  If you're going and spot me, do come up and say hi. I can tell you many interesting stories about the creation of this site.

There are no interesting stories about the creation of this site.

Also, Transformation: The Book is now on most of the Amazon site and Barnes and Noble! The links have been added to the BOOK SHOP page.

And finally... 9 people from the Guardian website have visited this site in August. A quick Google doesn’t suggest why, but welcome you lovable lefties you.

However, Daily Mail readers shouldn’t feel left out, I will whore myself to anyone if they’ll buy a book. 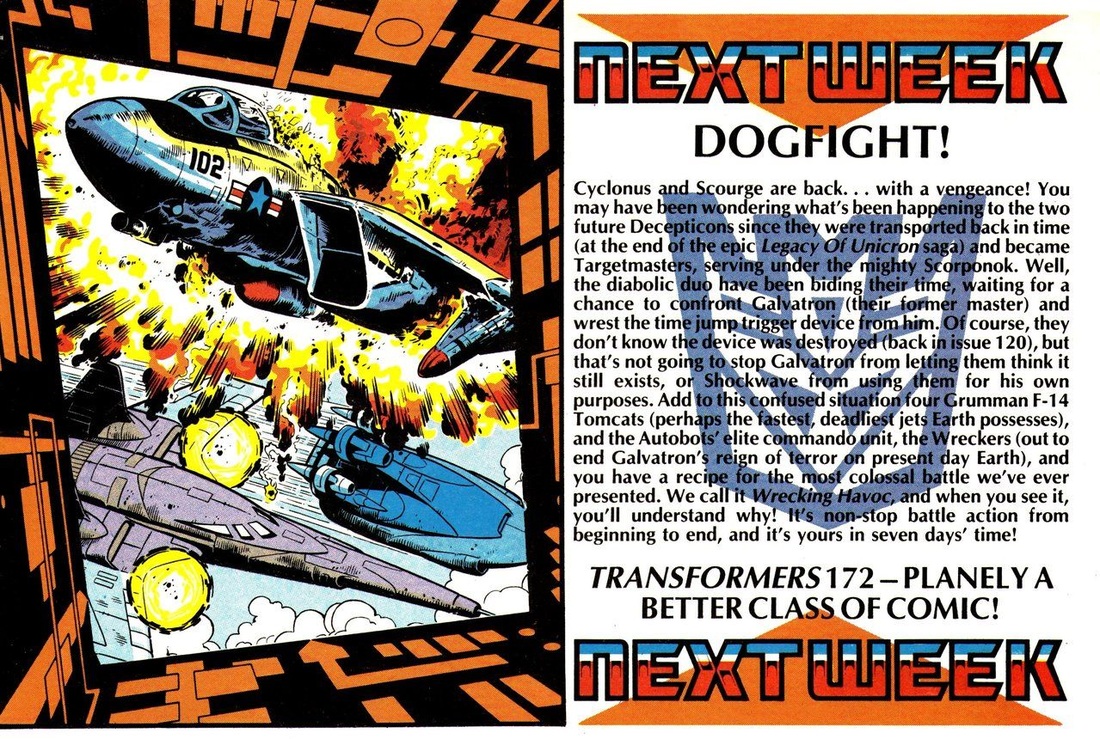