And When We Are Gone, It Will Still Burn On and On and On. 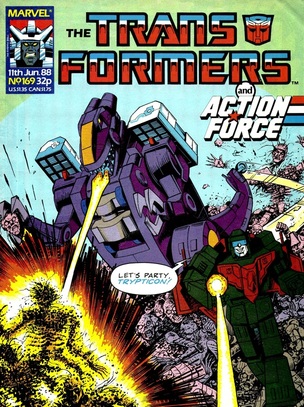 Oh that Xaaron is a tease. The cliff-hanger last issue might not quite have been the threat of Emirate transforming, no doubt for many readers it was as vexing a mystery for the following week as the threat of Trypticon. Here that is played upon as the issue opens with two pages entirely given over to Xaaron gearing up to transform as he tries to dodge Flame's energy blasts. To heap tension upon the building anticipation there's much talk of the pain and danger Xaaron is about to put himself through, topped by a panel of pure strain rippling through his entire body as he prepares to change shape.

Is it then ultimately a cop out that the nuclear reactor going critical means he doesn't actually transform? It's rather a groan inducing way to both resolve the build up and open the issue and I distinctly remember doing a metaphorical face palm even when I read it as a kid. On the other hand though, it's hard to see how any vehicular mode for Xaaron could have been remotely satisfying considering Xaaron's character model blatantly doesn't turn into anything. It's arguably, using the modern parlance, trolling the readership but if nothing else seeing Xaaron genuinely out of his depth for the first time made it a worthwhile troll.

The warning from Flame's computer that the reactor will explode in 2.5 Breems (and it's odd to have Cybertron time be used but to have the computer screen in English) effectively stalls the fight and sees Flame return to robot mode, however the following pleading from Xaaron and ranting from Flame is somewhat less satisfying than their face-off last issue. This is partly because it largely cover the same "Your reactor is dangerous!" "No it's not!" ground again, but mainly because Flame is now so far gone that he's no longer listening and thus failing to engage with Xaaron on a dramatic level. Each character is giving a monologue in isolation that the other isn't listening to; they might as well each be alone in separate rooms. 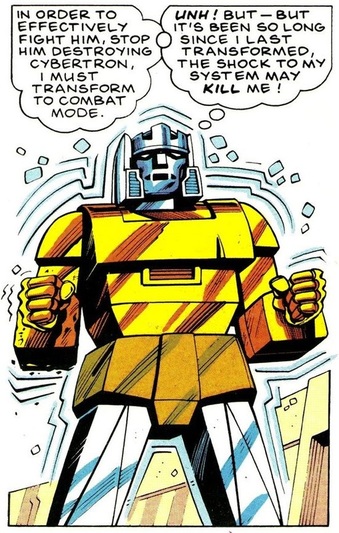 BUT WHAT DOES HE TURN INTO?!
Outside the room the Wreckers are failing to get through the door, leading to Magnus wondering what's keeping Broadside and Springer. The double take they do upon seeing Trypticon and presuming they're all doomed is fantastic, only being topped by the triple take that ensues from Springer and Flywheels stepping out from behind the monster and revealing this is the Decepticon's reinforcements. It’s almost a shame Trypticon in on their side as it would have been interesting to see the three second fight where the Sparkler Mini-Bots tried to take him out with the flames from their infamous vehicular modes.

It's not only fun--and the panel of Trypticon head-butting the door down is a punch the air moment--but also nicely validates Magnus' decision in an understated way and allows the scene to end on a slightly spooky note as Impactor's shambling form follows them in.

As a sign of how much he’s now living in his own little world, Flame completely fails to hear the giant dinosaur stomping into the room, and is took unawares by Ultra Magnus. Interestingly in relation to the TFWiki theory I mentioned last week, the one panel in this issue where Flame’s Autobrand is definitely missing (there are panels where Smith clearly hasn’t placed it but Flame’s arm is obscuring most of the area) is when an act of violence is being committed against him as Magnus grabs him by the neck. It is a lovely little moment though as Magnus casually throws him aside with a quip, showing how pathetic the tiny little man really is.

It’s here the Autobots probably regret the deaths of Tech 1 and Tech 2 (despite his seeming survival three weeks ago he’s not with the prisoners so either died off-page or ran away) as they’re forced to rely on Topspin to try and work out how Flame’s reactor worked. Furman is building up to a Wrath of Khan moment, so it turns out the one control panel that can isolate the reactor from the blast is within the reactor itself. That’s a health and safety violation (at least in Khan it’s a faulty ash tray within the reactor that needs wrestling with rather than there being a switch in there), but Furman at least lampshades this by having Magnus snort “Great design!”

Xaaron then decides he is Spock and will go into the reactor himself whilst the others escape. Nicely there’s little time for sentiment, luckily as I suspect every reader knew how this would end (a panel of Impactor looming in a door behind Xaaron is a nice parallel to our first glimpse of the zombie in Legion of the Lost!), as Flame manages to summon more zombies into the room. This leads to our cover moment of Trypticon cheerfully stomping on the creatures and we get a fantastic panel of Magnus turning a wave goodbye to Xaaron into a bitchslap to a zombie. 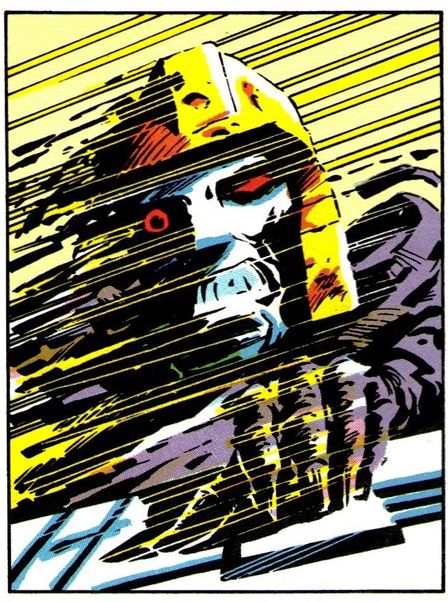 "I have been, and always shall be fucking awesome with my harpoon hand"
Oddly no one thought to deal with Flame as they left, meaning the mad Autobot makes one last pounce at his former friend... oh my will Xaaron now finally transform?!

No, instead we get another great panel, and one that seems to deliberately mirror the death of a facsimile construct in the same way back in issue 82, of Flame getting a harpoon through the head that impressively manages to be the most violent moment in the issue. Yes, Impactor is going to sacrifice himself for Xaaron once more, taking his place and again there’s a pleasing lack of sentiment. Impactor is happy to end his misery and even manages a joke with “Death comes easily to me!”

Sadly as Impactor isn’t a scientist and is missing half his brain he actually has no idea how to fix the reactor and instead the entire thing goes nuclear and destroys the entire planet, making this the last issue.

No, amazingly he can do it (luckily it only seems to involve pressing one button), and the art of him struggling to the panel and being melted by the heat is a memorably gruesome way for him to make his second, final, exit from the series.

On the surface everyone is surprised to see Xaaron just before a more mild explosion rocks what is left of the city (with property values down the Autobase will be moving back to its old digs in Iacon), with Xaaron then taking the time to give a final proper eulogy to the Autobot who died twice. Sadly no one has the time to give a eulogy for Trypticon who was equally key to saving the day and doesn’t seem to have escaped with the others (the exit Xaaron comes out of would definitely be too small for him, if he had to go a longer way round he was presumably caught up in the blast). Alas poor Trypticon, you only appeared twice but were memorable on each occasion.

This isn’t quite as strong an issue as the last few instalments, with the payoff to Xaaron’s transformation being unsatisfying and a few unlikely contrivances to move the plot along. Trypticon’s brief dialogue isn’t as erudite as it was under Uncle Bob either, making for a slightly less fun character.

However, overall this has been a rollicking story that moved along at a fast exciting pace with lots of memorable moments and some great art throughout. Considering the problems within both Space Pirates! and Time Wars it’s the last great colour UK epic.

Best Autobot Rodimus Prime? I demand a recount!
Transformation makes a great fuss of the return of Trypticon, even if it is forced to admit that the cover rather gives away the resolution to last week’s cliff-hanger. Still, it is a great cover from Jeff Anderson; I especially love how Trypticon is holding a zombie head in one claw and decapitating another with his tail. Transformation also reveals the winners of the Ready Brek competition from issue 160, which is appropriate as Impactor is left with a Ready Brek glow at the end of the issue.

Grimgrams reveals that not all readers love Ready Brek, as Jamie White from Glasgow is annoyed he had to destroy that issues letter’s page to cut out the coupon. Grimlock assures him that in future all such coupons will be on the back of a poster of Optimus Prime.

Andrew Grant from Croydon has also compiled the 1987 readers’ poll. It’s all fairly predictable stuff (though notably Death’s Head wins best supporting character. This might be a sign of his popularity or the fact that readers would have struggled to name a non-Autobot or Decepticon supporting character that wasn’t awful. If this hadn’t been put together by a fan off his own back I’d cynically think Marvel threw that category in so their new character would win it), I certainly don’t think anyone would have expected anything other than Headmasters to be voted best backup by kids who like Transformers for example. It’s here that poor old Bob Budiansky begins his formal reign as everyone’s second favourite Transformers writer as well.

Action Force sees the end of Thunder Machine, and gives us the first really painful example of Larry Hama’s xenophobia to be presented in this comic. As Sergeant Slaughter tries to find the vanished Thunder Machine he stops a local who won’t answer until he’s assured that the utterly crap looking toy he’s riding in wasn’t made by dirty Russians or Germans. No Slaughter tells us, it’s all made by Americans or a “Friendly free-world nation!”, which considering some of the people America was friendly with at the time might not be a great boast, and either way it’s amazingly hypocritical for a comic promoting toys made by child slaves in China.

The person he asks does turn out to be Zander is disguise so you could argue this is a piss-take, but considering how often Hama has characters rant throughout the series about Americans who dare buy products made by countries they were at war with forty years ago (or in the worst example, Roadblock threatening in all seriousness to shot an unarmed civilian with his massive Blaine-From-Predator-gun for daring to think of burning an American flag) it’s more likely pure racism and means this otherwise harmless story ends on a rather nasty note.

Combat Colin sees Lew Stringer throw a nod at his original name for the character as Colin and Steve bemoan they’re not as fit as their hero, Dimbo actor Sylvester Stupone. What follows is a rigorous exercise routine that leaves them with abs of steel, before they celebrate by pigging out with a massive fatty feast.

Which by amazing coincidence is how I will be spending the day.

Next week, the first of many call-backs to State Games.

[Don’t forget: BUY THE BOOK. Yes, you thought I’d do the entire piece without a plug.] 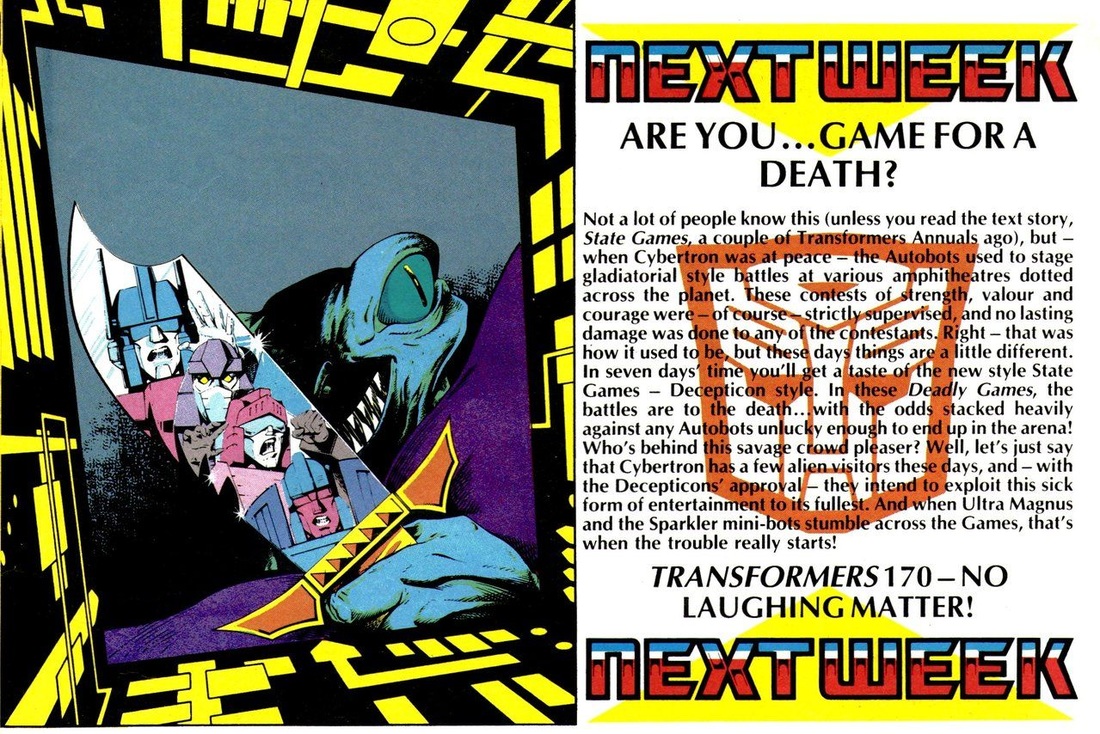