No Money Back, No Guarantee. 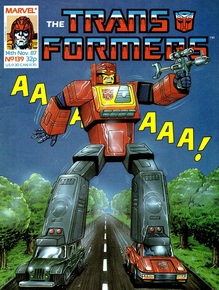 The uncharacteristic scream of "AAAAAA!" from Blaster on the cover this week can almost be seen as a comment from Furman as editor on having to return to American material after a luxuriously extended run of British stories, especially as the visual of the Autobot roller-skating on Throttlebots suggests we're going to be back in Budiansky's full on comedy mode.

Used Autobots actually opens fairly promisingly as the rogue Autobots are spotted by and attacked by Vortex, complete with changed dialogue making reference to last week. It's a solid action scene with the skating from Blaster being played surprisingly straight bar one typical Uncle Bob moment of the comedy bystander ("H-hey! You're in the wrong lane!"). It's only the visuals that let it down as Don Perlin is clearly using the toys as a scale reference, resulting in Blaster looking ludicrously large.

The pace is kept up after Vortex is sent packing by Blaster's trusty electro-scrambler, as the Autobots try and get fuel from a Blackrock garage. Whilst I'd remembered that Buster Witwicky and the Carwash of Doom! was Blackrock's last appearance in a Budiansky story, it had completely slipped my mind that we get an explanation for the dissolution of the Blackrock/Autobot protection racket. 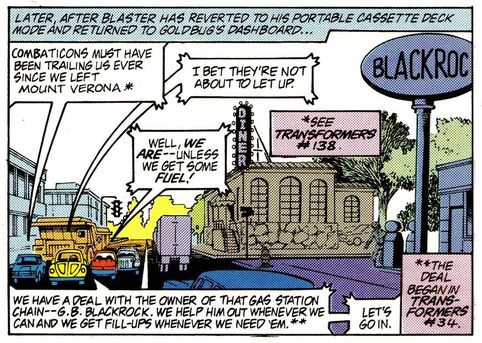 The altered panel.
It turns out RAAT are now wise to the deal (being very slow on the uptake) and are camped out at every petrol station with a two stage tank and aircraft vehicle thing that looks like a knockoff Action Force toy. It's amazing they found this a productive use of time rather than staking out the volcano where two Transformer bodies have been dug up, but it does mean we get a second fun fight scene as Blaster takes them out.

However, there are still problems with this opening as Blaster is not only back to being a complete and utter dick but the Throttlebots are being needlessly bitchy to each other as well, making you wonder both how they ever worked as a team and why they're hanging about with the rebels when the local Autobots have no beef with them. It's also an issue that Blaster remains the only one of them who is even slightly competent, having to solve every difficulty himself whilst the others whine.

The downward turn comes when we visit the Ark for a page for basically the same Budiansky Grimlock routine of him being a crown wearing cock to all and sundry. At least in the UK we have the advantage of a longer gap since we've seen this (and even for Americans he hadn't been in the previous three issues), but it's still wearing a bit thin, even if it is nice to see that the always underused Wheeljack has basically become Grimlock's ever frustrated right hand man.

This is also a place where the UK team could perhaps have also altered the dialogue, as Grimlock acts as if he's been told of Goldbug and Blaster's disappearance for the first time even though his desire to get them was a major plot motivator in Ancient Relics! I suspect Furman thought he could get away with leaving it as was as most of Grimlock's lines are nonsensical anyway.

Though it has to be said, Grimlock's leadership has resulted in Wheeljack developing a new way of making energon cubes from the heat produced by the volcano (further removing the need for Blackrock) and has gotten the Ark ready to fly again. That's a four million year old spaceship that was only ever intended to make one voyage, now set up for at least another four years use that will see it survive slapping the devil in the face. That's a top notch repair job and suggests Grimlock has to be tough as he because his troops are so lazy. 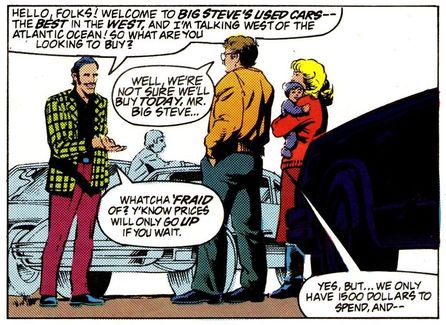 "Marlene!"
The final four pages are where things really fall down. With no fuel and Rollbar with a big hole in his arse, the Autobots decide to hide out in Big Steve's Used Car lot. Now, if you've ever read, say, anything with a used car salesman in it you might be thinking that you know exactly what would be coming next.

And you would be right.

There isn't a single cliché about one of the least loved professions in the world (when bankers feel put upon they read Matilda to cheer themselves up) that is avoided here, from Steve fleecing the gullible new buyer through to the odometer of an old banger being put back so it has less miles on the clock. It's tired, not especially funny and leads to a weak cliffhanger where Steve, having decided to just sell the mystery new cars, has a loud voice speak behind him.

It's also silly that the police make such a poor effort to search the lot on behalf of RAAT, just giving Steve a list of the vehicles they're looking for before he shoos them off.

After a promising opening this issue rather falls apart once the comedy kicks in. The only fun to be had from Steve comes from imagining how the British creative team would have handled a moustache wearing dodgy car salesman, he could have been a full on Boycie homage. 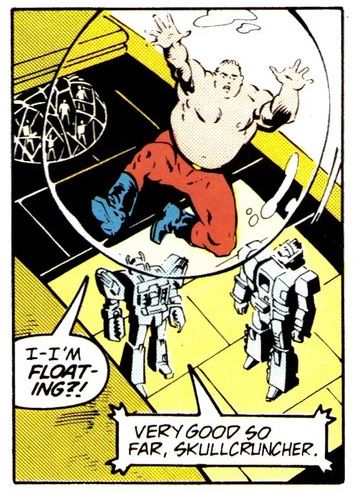 Forever blowing bubbles.
The second part of Love and Steel! sees Scorponok unveil his new secret weapon... a bubble making machine. Which he seriously claims with a straight face will let him send anyone captured in a bubble floating up into space, despite the fact the test on Monzo doesn't go so well.

It's no wonder with plans like that we'll see Scorponok come up with Pretenders next year. Thinking bubbles are a good idea is likely what starts him down the road to deciding teaming up with Zarak as a Headmaster might be a good idea. The main highlights are Scorponok's pure frustrating at his troops for the arse kicking they got last week and Zarak's sincerity in wanting to do the best for his people whatever the cost. The second half of the series is also effectively foreshadowed as Scorponok explains the power the Headmaster process will give Zarak could make him forget his lofty ideals, and even his daughter.

At the Autobot's base, they're visited by members of the council as per the agreement made last week. Bizarrely Galen, who seems to be going a bit power mad himself, proudly tells them his people are studying the Autobots discarded guns (all looking like Targetmasters now) to find out how much punch they pack. How does he not realise how a group of pacifists will take this news?

There's also a weak cliffhanger here as Llyria arrives (now wearing a fetching purple leotard and transparent plastic flasher mac) and Galen runs up to her in excitement. Will the Nebulon make up with his girlfriend? Come back next week to find out! 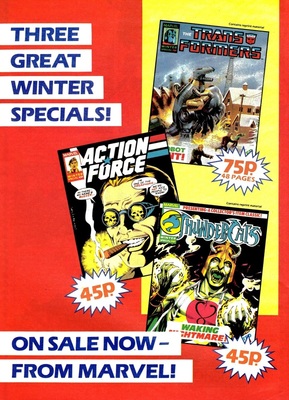 Advert for that winter's specials.
Transformation sees the comic team up with a new and by 2015 long forgotten puzzle game called Dragon Lock, you only have to answer three questions about the comic to be in with a chance of winning one.

The letters page has Grimlock explain to Ernie Nickells of London that the new characters introduced in the comic will probably be covered by AtoZ after it's gone through the alphabet once with the old characters. Impressively this will actually happen, and sooner than Grimlock's pessimistic prediction of nine years ("You will all still be reading the comic in 1996, won't you?" Oh if only you knew Simon, if only you knew).

Speaking of AtoZ, this week it covers Dragstrip and Fireflight, whilst King Nonose continues to have no luck in Robo-Capers as the new planet he's on turns out to be run by a big bastard of a robot named King Kog.

What's really interesting though is the image in the Next Week box. Recently this has tended to be a cropped version of the following week's cover, but here it's a Dan Reed drawing of Goldbug from when he was watching "Tee Vee" two weeks ago slapped on a new background with a Big Steve sign on it, with it being very obvious the final result is the work of two different artists. Presumably the cover wasn't ready when they went to press, but it perhaps says a lot of the UK team's perception of the American art that someone went to this effort rather than them just using an interior panel from the second half of the story.

Next week, what doesn't like sugar despite being horse powered? 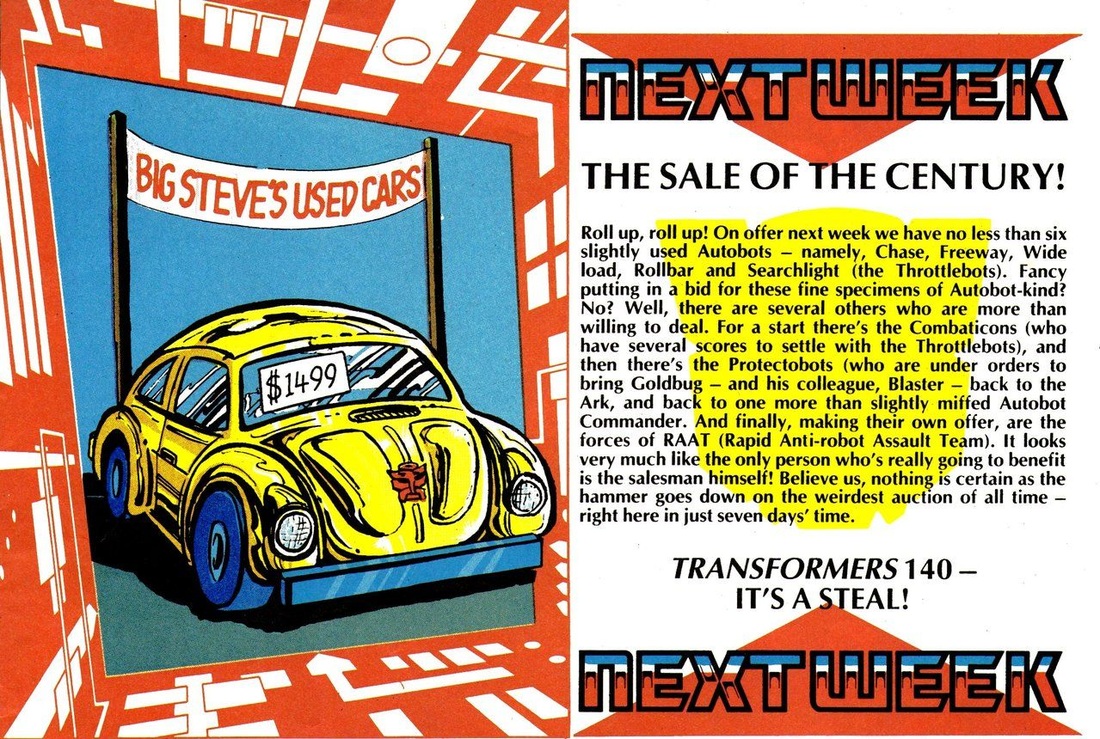