It's almost a pity--after such a monumental effort to stay alive--to have to kill it!

Happy New Year! It's odd to think we're now a full decade on from when Transformers: The Movie is actually (as opposed to what Marvel UK claim) set. I hope you like jokes pointing out how the 2015 portrayed in Back to the Future Part 2 doesn't resemble the real 2015, I suspect there'll be rather a lot of them. 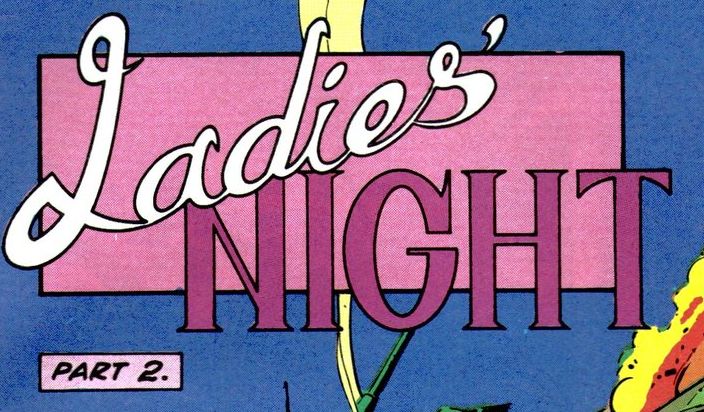 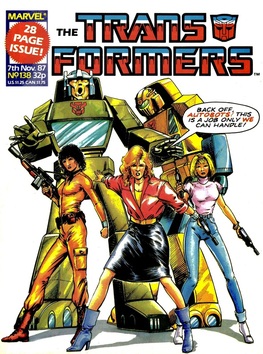 Well that's a cover that really shows up how much of a different era the 1980's was doesn't it? As with that claim of Furman's that this is an "Offbeat" story, Barry Kitson (making a return to the comic for the first time in ages) seems to be working on the assumption that a strong leading role for women is so unusual and crazy in and of itself that it can be made a major selling point of the comic. Just get a load of that expression on Rollbar's face; he just can't believe sisters are doing it for themselves. I like to imagine he’s doing a really good impression of Spock in The Cage and shouting “THE WOMEN!”

Mind, let's be fair on the 1980's here and point out that, generally speaking, Transformers is much worse for its treatment of its female characters (or female avatar characters depending on where you stand on the issue of Transformer gender) than nearly all of its major contemporary boys toys based franchises. This is a cover that wouldn't have been possible on Transformers Marvel UK stable mates Action Force and Thundercats, they already have strong females amongst the leads (albeit just the one in the case of Thundercats, she still pisses all over Arcee though), going "Look, girls!" would never work as a selling point for them.

Luckily, behind the cover things are far more nuanced. It would have been far too easy for Furman to over compensate and have the women quickly defeat the giant killer robots in a hugely patronising "No, really, you are just as good as the boys" way, but thankfully this is avoided.

Instead, things are handled much more sensibly, with the humans taking advantage of the Combaticons having their guards down on such a simple mission and using their common sense. 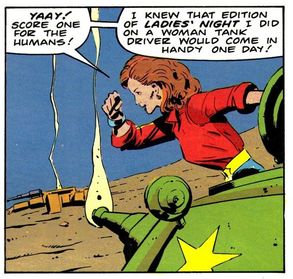 More useful than the episode on a woman refuse collector.
So the abandoned army equipment (and whilst- amusingly- it's established the soldiers have run away it's never clarified what happened to Joy's camera crew. Perhaps they heard what happened to their predecessors?) results in them turning a jeep into a bomb on wheels that knocks over Swindle before a tank finishing the job.

Whilst Joy just happening to know how to drive a tank is slightly contrived (as is her still wanting to hang around after her prior experiences), it's generally a well executed sequence that feels plausible. Nicely their attempt to escalate the idea against Onslaught does fail, and results in what would have been their certain deaths if not for the arrival of the Throttlebots. It's all very well done and is probably the best humans Vs. Transformers sequence we've yet had in the comic, even if it does have some thematic issues we’ll come too shortly.

It has to be said though, that Susan's motivation is hard to fathom; she wants to preserve a great archaeological find but there isn't actually one here, just two alien robots. There's also some amusement to be had from the fact that her goals are actually at odds with those of Cindy. She wants to keep Magnus in lava so as to study him for...err... archaeology, whilst Cindy wants to save him. It's lucky this doesn't seem to have occurred to the screaming idiot or there'd probably be another crying fit.

On the robots side of things, the portrayal of the Throttlebots is interesting as Furman basically fully ignores the Blaster/Goldbug relationship in the American stories and instead has Goldbug as the confident self assured leader with the cassette, in his TV persona, as his sidekick. It makes for a nice change, and the panel of the Throttlebots lined up against Onslaught, and him actually being scared of them (or acting as if he was anyway, he actually wants to get out of the range of the explosives) is comfortably the most dangerous they will ever seem

Also, I believe the moment where Blaster prevents the explosion by jamming Soundwave's activation signal (using music, another sign of it being TV Blaster) is the closest we'll come to the obligatory battle of the tape decks in Marvel. 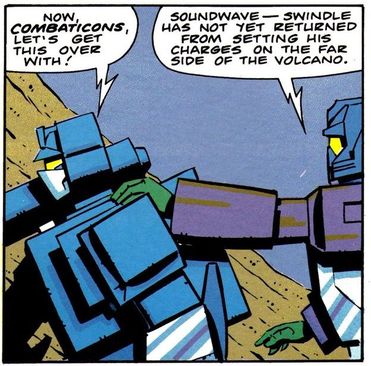 See, he does care!
Whilst there isn't a huge amount of character development for the Decepticons, there's still a nice sense of the Combaticons being a close knit team. The quiet, understated way Onslaught reminds Soundwave that Swindle hasn't returned from setting his charges yet has just the right sense of threat to it to suggest he really does give a toss about his troops, which is always a welcome change for the 'cons.

We also get a nice bit of set up for the next American story as Onslaught warns the Throttlebots that are now on the Combaticons' naughty list. At this stage it's been months since the British and American adventures have really connected (around issue 100) so it's almost shocking to have this reminder they're actually both part of the same Universe rather than happening in parallel.

It's only really at the end of the issue that things fall apart as the fact this is last second filler becomes apparent when everyone suddenly forgets to save Ultra Magnus (despite that being Cindy's whole reason to live) and decide to just leave him and Galvatron there. Rather than, say, chiselling out the Autobot and then blowing up Galvatron. The story ending with the Decepticon starting to escape makes everything that happens subsequently the fault of the Throttlebots.

It also has to be said that, whilst the fight scenes are nicely realistic, the fact the girls do wind up out of their depth and need rescuing by the boys does feel as if it undermines the intended message. It doesn't help that Joy decides to be rude to the beings that stopped her being turned into people pate by accusing them of sexism (and of course, she's made to look foolishly stupid on that score as Goldbug wasn't going to insult her gender, but her whole species. Women hey?).

Flaws aside though, this has been a pretty enjoyable two parter enlivened in the second half by some great Geoff Senior art (he makes Soundwave transforming look cool!) that adds a lot of energy to proceedings. It's also worth reiterating a point I made a few weeks ago, the reprint of Man of Iron in the American series (which actually happened after the next story but it's fair to say the make weight is here) was decided upon so late in the day the previous issue didn't know about it. The last four issues must have been thrown together fairly quickly, so the fact they stand up as well as they do is impressive in and of itself.

But why did Joy feel the need to go up a volcano in thigh length high heeled boots and a tight leather skirt anyway? 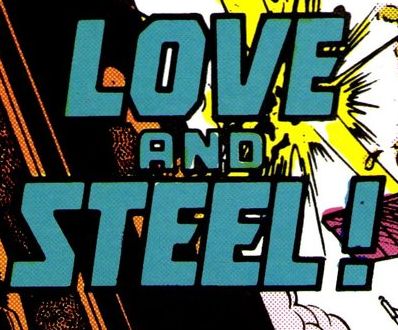 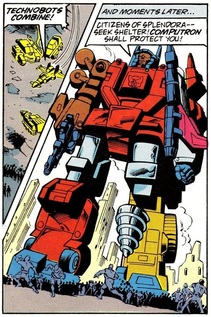 Unimportant characters.
The opening of the third chapter of Headmasters, Love and Steel!, is almost entirely given over to a fight between the Terrorcons and Technobots in the Nebulon city of Splendora (does Wizadora come from there?). Unfortunately this is nothing but straight up toy advertising and these characters will make no future contribution to the series, making almost this entire instalment easily skippable bar the very end where the ruler of the city makes a point of a team of officials accompanying the Headmasters on their next mission to supervise how good they actually are.

The underwhelming cliff-hanger actually comes just as the plot proper is about to kick off as Scorponok; living it large over his prisoner Zarak; is about to be introduced to Mindwipe's new invention.

Transformation is excited this week about the opening of a new Nostalgia and Comics store in Sheffield, which will have a raft of Marvel UK stars doing a signing at the opening on November 14th. I wonder if this shop in the Redgate store is still there like the Birmingham one is? 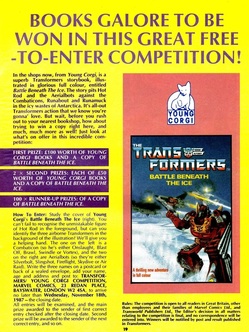 I owned this!
On the letters page Grimlock confirms to the marvellously named A. Bow of Carluke that Goldbug is indeed an honorary Throttlebot. Meanwhile, Robo-Capers sees King Nonose land safely on a new planet and declare he never wants to see another robot again. Guess what the only things living on the planet are?

The comic is very excited about having four extra pages again, but the only really interesting things it's used for is an AtoZ on Dirge and Divebomb. Otherwise we get a slightly random reuse of the old "New Leaders" advert (it feels as is Hasbro had heard Magnus and Galvatron were in this issue and asked for it to be rerun as a tie-in without realising the extent of their role) and a competition for that great book I covered last Christmas, Battle Beneath the Ice.

There’s also a seminal moment for anyone who ever rented a Transformers VHS as a advert for various Tempo videos (including Robotix, Big Foot and the Muscle Machines and-more importantly for readers wanting to know how the hell it ended- Inhumanoids) promotes what I believe is the first UK release of The Girl Who Loved Powerglide. It shall not be the last.

Next week, the return of Uncle Bob and bastard Blaster. 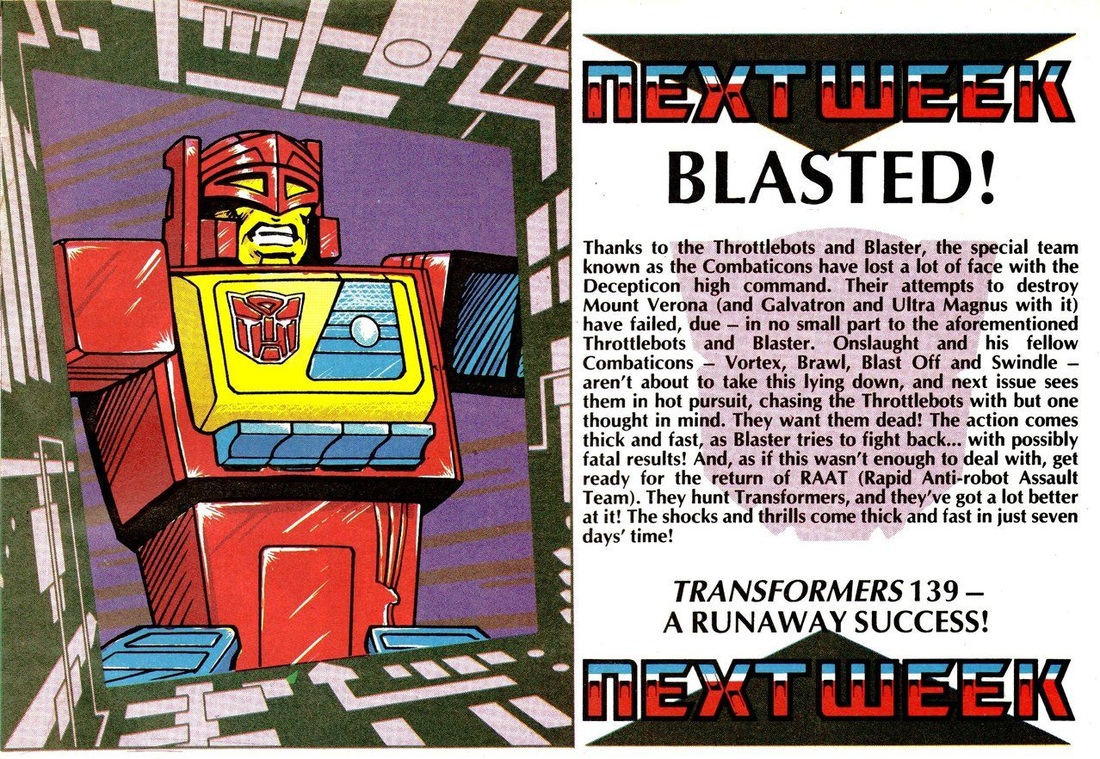