"Nice simple rescue mission. Straight in, straight out-- they won't even know we've been there!" Ha! 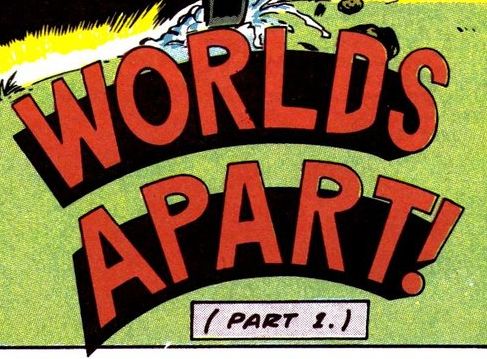 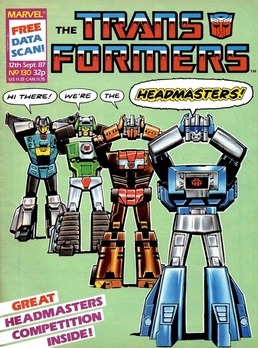 Even more so than Ancient Relics, this is a story that should by all rights be a disaster. Like Second Generation!, it's a Hasbro mandated advert for toys and characters Furman admits he wasn't hugely invested in (it seems he actually liked the Targetmaster idea but couldn't get his head around... Well the Headmasters), drawn by an artist on his way out the door.

The fourth Classics UK book also makes it clear that, like the earlier Hasbro pushed Event, the creative team weren't too happy with the final results, to the point Editor James Roberts is clearly putting a bit of effort into assuring new readers they won't feel as if they've wasted at least part of the RRP. Even Geoff Senior doesn't like his cover to this issue.

From Furman's point of view, this is a necessary evil. By doing a two parter that focused on characters Hasbro UK were keen to promote who didn't get much attention in the Headmasters miniseries (mainly Highbrow it would seem) he was able to avoid running that as the main strip and thus loosing eight weeks of British material. And that would have been a real possibility considering the US comic's use of Man of Iron is going to leave the UK a month short of its usual amount of budget saving reprints.

Instead the miniseries- which Furman admits to not being terribly keen on anyway- is relegated to backup, the money is found to produce the extra British material for 1987 with no cheating (likely thanks to some extra investment from Hasbro) and the comic even gets two weeks of TV advertising as a result. So this story the author didn't want to do became a case of making it through with gritted teeth and taking one for the team.

It's also, understandably, not very well regarded by fans either. That's not to say it's hated, if anything it's rather ignored for an issue promoted as a Major Thing and doesn't generate very much discussion at all. It's the backup that tends to be better remembered and debated as its greater length leaves more room for standout moments, good, bad and just plain bonkers. 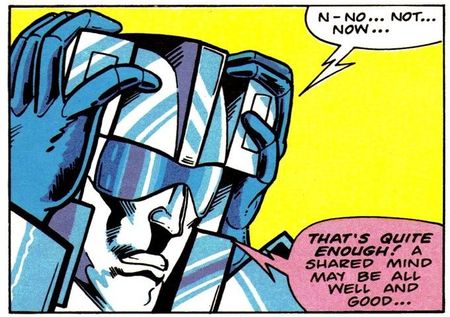 "Does that Brainstorm look shifty to you?"
Unsurprisingly, I find this apathy on the part of both readers and writer to be somewhat unfair, and do think this story learns from the lessons of Second Generation! in several important ways that makes for a far more satisfying, if by no means classic, reading experience.

The big difference between this and the Special Teams introduction is there's no attempt to make it fit "now", it's not a dream sequence or other imaginary story contorting to introduce characters who won't be created yet. Furman simply pumps for setting it vaguely in the near future and doesn't worry about the details so he can get on with the story, an approach that will become more common during the black and white era as the exact placement of British events in relation to the American will become more and more abstract.

In fairness to Furman, we know that Budiansky seriously pitched the idea of a Headmasters ongoing (as reprinted by Titan) that would have been dependant on sales, so therefore at the point Furman was first approached by Hasbro UK to come up with a special introduction for these characters whilst he was working on Wanted... it could still have been a serious possibility. Certainly this works best when viewed as a missing issue from a comic about the adventures of the Headmasters on Nebulos rather than when squeezed between pages of an otherwise self contained adventure.

Either way, this story can hit the ground running with little fuss and bother. The Autobot Targetmasters (oddly missing the repurposed film Autobots, I'd almost think Furman was trying not to confuse readers right off the bat if not for Cyclonus and Scourge showing up on the last page) have been captured by the Decepticons so they can learn their secrets. To rescue them the Headmasters fight their way to the Decepticon base, but the whole thing is a trap set by Scorponok as it's really the Headmaster process that he wants to crack...

It's basic stuff, but it's also fast and breezy with some nice action beats and deft fast characterisation for the Autobot Headmasters (though the Decepticons are mere crazy thugs at this stage), and it also sees Furman play with the whole binary bonded concept in a way Budiansky won't until he starts to look at Spike post-Underbase. 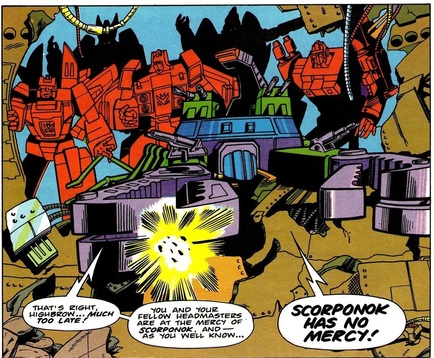 Dudes, forgetting your guns is like Scorponok leaving his head at home.
This indeed is the heart of the story: Can drastically different personalities work together as one? Chromedome and Highbrow are concerned their progress towards The Fortress of Despair is too easy and suspect a trap, but Stylor and Gort insist they push one, resulting in Highbrow declaring he and his head are (all together now) "Worlds Apart". Perhaps Furman is letting his disdain for the concept show through here- and he does hit on the problem that Bob seems to have deliberately paired up completely incompatible characters- but it lets everyone establish themselves through something more dramatic than the usual "Say the name and basic personality of the person standing to your right" method. It is true next week's resolution to this conflict of personalities is fairly obvious, but it still works.

But that's this story all over, it's straightforward and has a job to do, but does it in a way that reads better than its reputation would suggest.

Will Simpson's art is interesting in that he'd been effectively replaced by Dan Reed in the artist roster at this point; presumably this last hurrah was down to him still being part of the team when Hasbro first asked for this special story. Generally it's solid stuff, but the unusually flat colouring really doesn't bring out the best in the art.

As a random aside before we go onto the second story of the issue, if not for that last second Cyclonus and Scourge cameo every single character in this instalment would be making their first appearance. For some reason they're both doing identical "cupping the balls of an invisible giant" poses and none of the Decepticon Targetmasters have their guns. 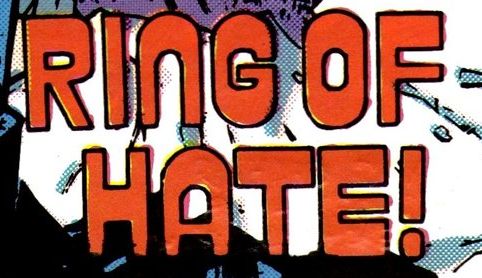 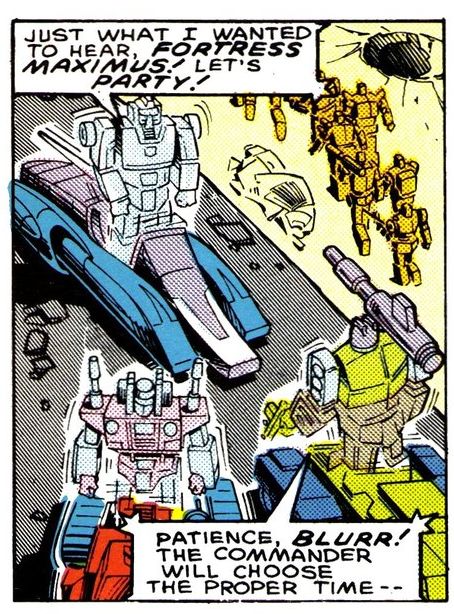 Blurr... what happened to your face?
The four issue  Headmasters miniseries that will be the backup strip for the next 16 weeks is generally seen as being better (which basically boils down to shorthand for "more serious" in the eyes of a certain type of Evil Brainwashing Disco Carwash hating fan) than the work Budiansky was doing on the monthly book. My memory of it was that the character jamming made Rebirth feel restrained in places whilst there were some insanely bonkers moments on Nebulos that didn't really work.

These first six pages of Ring of Hate! tend to back up the more general fan view than my own memories. As with the Smelting Pool storyline (which gets a nod in dialogue), being freed of his beloved Earth setting actually seems to bring out the best in Budiansky as we see a group of Autobots led by Fortress Maximus rescue a group of captured Autobots being led by Scorponok (whose exact position in the Decepticon hierarchy is somewhat unclear at this point, but he'll wind up the third Decepticon leader the book has in service at the same time) to be turned into slag like poor old Straxus' victims.

It's a nice gritty opening that lets Maximus establish himself as a proper no nonsense square jawed hero whilst Scorponok gets to show what a nasty piece of work he is as he gloats over his prisoners.

It's the scene back at Maximus' base in the Manganese Mountains that really sees him set out the stall of what his character is going to be. Whilst Kup and Hot Rod are gloating about what a great time they had killing Decepticons (hold that thought for the future), Maximus now considers both sides are as bad as each other and they need to leave Cybertron to find a better way of life. Perhaps on the distant planet Nebulos...

Though it's hamstrung by the short page count meaning things barely get started before the NEXT panel comes into play (and the difficulties of the American pacing not really suiting being split into more than halves are only going to become more apparent in the years to come) this is still a strong opening that suggests Bob is going to be on solid form despite the constraints of having to introduce just about every 1987 character in 88 pages.

The real problem is the art. Not its quality as such, Frank Springer does good work despite it being smothered under Yomtov's colours, but it's the victim of the worst supervision by the editor of the entire run of the comic.

Yes, there are a lot of new characters in play with multiple modes and partners, but it really feels as if Springer dropped the characters sheets on the floor and got into a muddle when he was trying to put them back into some sort of order. Blurr's vehicle mode transforming into Crosshairs robot mode is the biggest standout here, but as we go along look out for Headmaster heads and Targetmaster guns appearing as their bigger associates, characters appearing in the wrong places and a ridiculous numbed of generics.

All topped off with the characters that are drawn right having a 50% chance of being coloured wrong. It’s really something Editor Don Daley should have had a better handle on keeping on track.

In short, it's a mess, and as such I won't be wasting much time across the series pointing out every example or wondering if that really is Sixshot making a one panel cameo as life is too short. Though there is one very notable exception that we will come to in time. 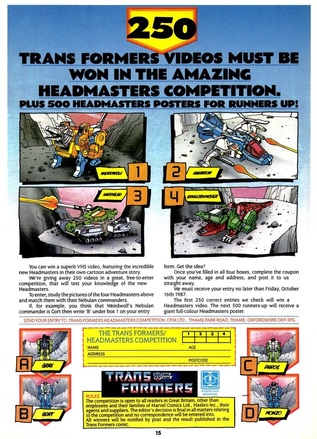 To give the arrival of the new toys as big a push as possible we get something of a unique free gift: a "Data Scan" that lets you fiddle bits of card to reveal the secrets of the various Headmasters. I don't possess this (meaning, ironically, there is no scan of it included here) but it sounds like the sort of thing that would be hugely appealing to kids.

The other big thing this week is the competition for Headmasters videos, which can be won by paring the right Headmaster with the right Nebulon. It's still not clear what form this tape will be taking (the closing date of October 16th being close to a month before the story finishes its American broadcast); unless the UK really is going to be unusually quick on the uptake here some sort of special Hasbro made preview VHS would be my best bet.

The readers seem to be in an Ultra Magnus sort of mood this week as three of the four letters are about the Autobot and his potential role in the Annual. You might even suspect that Grimlock picked a disproportionate number of Ultra Magnus focused letters so as to give hardback some extra promotion, but surely he's above anything so blatant?

Next week it's the last entry before I turn the grand old age off 33. Will the comic give me an early present of a really good issue? 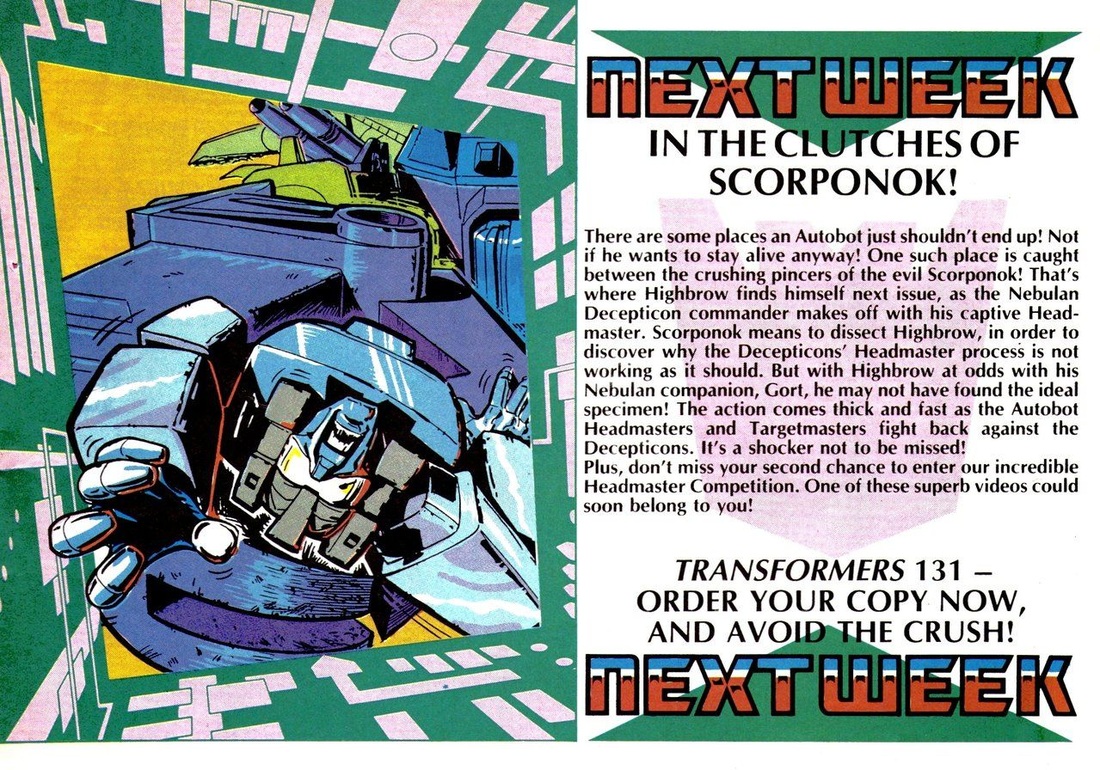