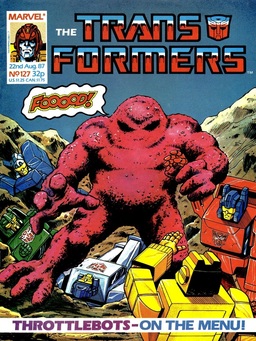 I don’t need to be entertained—just avenged!

This is possibly the strangest issue of the comic we’ve covered in a good long while, probably since the computer game shenanigans that killed off Optimus Prime back at the start of 1987. But whilst that story wore its oddness brazenly on its sleeve, the completely bonkers stuff here sneaks up on you at the end and bashes you over the head when you’re not looking as Budiansky provides what may well be his most left field dénouement yet.

For the first half the story pretty much proceeds exactly as you’d expect, and if you can call a comic about tiny robots that eat bigger robots “Straightforward”, this would be it. The Throttlebots are shown how water kills Scraplets and pretty much instantly become friends with Goldbug and Charlie (somewhere off panel they presumably go so far as to give at least one of them Throttlebot membership), before they formulate a plan to bring lots of water to the desert via G.B. Blackrock and the way his having a prominent role once more was neatly set up two weeks ago.

There’s some very nice stuff in here, including individual Throttlebots getting bits of characterisation as Wideload moans about what the Scraplets have done to his bodywork and Rollbar gets to act all leaderly in slapping him down. It’s also good that the water doesn’t instantly fix Goldbug up either; he has to be towed back to the crater and remains in a battered state throughout. 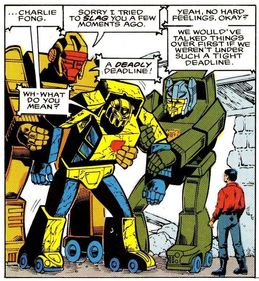 "You can be our leader to make up for it"
The really interesting thing though is the Blackrock angle. He’s called in for help by Goldbug and provides two tanker trucks full of water, but it’s the idea of him being added to the regular cast that really appeals. With hindsight, we know Grimlock is going to become more belligerent and less interested in human affairs, meaning the long standing deal between the regular Autobots and Blackrock over the protection of his property in exchange for fuel is going to very shortly fall apart, assuming it hasn’t already.

So you’d think a group of renegade Autobots who are still going to need fuel would be a Godsend for him. It’s very easy to see the comic going down the route of the Throttlebots (and any future defectors) agreeing to join Team Blackrock and taking charge of not only the defence of his installations but also the general protection of humanity from Decepticons that Grimlock has basically forsaken. So you’d have two plots running in parallel, the Ark based Transformers pissing about in space whilst Blaster’s team handled the more convention plots (which would probably still involve Combaticons in car lots and... dear God- teddy bears) before both sides are brought together for a final conflict on the Moon.

This is such an obvious way of giving the renegades a firmer sense of purpose than just driving about that it’s actually amazing Uncle Bob didn’t go down that road. Instead, the Throttlebots and Blaster will do not very much of anything on their continental hike except moan about Grimlock, whilst poor old Blackrock has only been reintroduced as a preamble to an even stranger story, and only then so as to set the stage for the return of Buster before his brother arrives. After that, we have to wait for Furman to work on the American series before G.B. will get anything like another anti-Decpticon plan going. 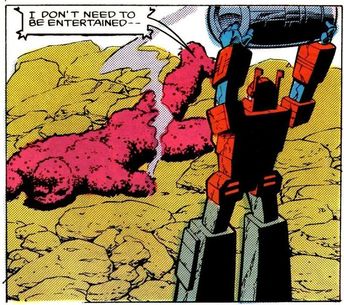 "Hence me looking forward to Space Hikers!"
The really odd stuff starts once they get back to the crater though. Blaster not being pleased to see Goldbug hasn’t abandoned him but has instead brought a cure is par for the course, though his grim proclamation that no Decepticons will be saved on his watch and therefore the metal-eating acid the Throttlebots have should be unleashed on them all continues to make him look a complete dick. Yes, Blaster is a guy who will bitch and moan and throw violent threats about even as people are being nice to him.

Understandably, Goldbug decides Blaster dying isn’t that bad a thing and orders the acid unleashed, but then the Scraplets merge into a giant monster and attack them.

The Scraplets merge into a giant monster and attack them.

I can’t think of how Bob could have come up with a less predictable ending to his story short of Blaster being kind. It’s certainly not set up beforehand and the only conclusion I can reach (and it’s one the Transformation page seems to agree with as it makes the comparison directly) is Uncle Bob was bloody sick of combining Transformers and wanted to do a complete and utter piss take of them. Which is fine, but it’s also random and not hugely funny or satirical. Not to mention that for some unexplained reason the water doesn’t work on the monster.

Still, this is lucky for Blaster as Goldbug decides they need the Decepticons firepower to stop Scrapzilla, so he bathes the crater with a hose. Let’s just think on that for a second: Goldbug doesn’t disobey Blaster’s direct order because of their deep friendship, or his respect for life, not even because he’s suddenly realised they’re rebels and technically Blaster isn’t in charge.

No, he disobeys Blaster because he needs the Bad Guys; if not for this strange turn of events Blaster would be blasted.

Annoyingly, the avoidance of the “Instant cure” with Goldbug is completely ignored here as the triple changers are immediately fit enough to fight a giant monster, and are all ready to torture it before Blaster just throws the remaining water tanker at it (so.... water does effect it after all? Or just being crushed? Who knows), before he and Goldbug become friends again, but not without an actual proper apology for being a dick.

Just to show up how completely useless the two of them are, they also fail to notice Blackrock being possessed by a mind control bug thing (even though with Bombshell about- though he must be on holiday this week- that’s exactly the sort of thing Blaster should have learnt to watch out for on Cybertron) and the rather larger sight of the Decepticons flying off with Ratbat’s mystery cargo. Well done boys, so far your solo efforts are making Grimlock look a shoo in for the “Worthy Successor to Optimus Prime” award.

The second half of this story isn’t quite as fun as the first thanks to the completely random ending and rather chunky dialogue from Blackrock as he explains he’s a big shot in the energy business for no reason other than Astrotrain is in earshot and that’s exactly what Ratbat wants. Still, the Throttlebots are fun and there’s a breezy energy here that more than compensates for Blaster speaking again. It’s just a shame the Blackrock angle wasn’t followed up on. 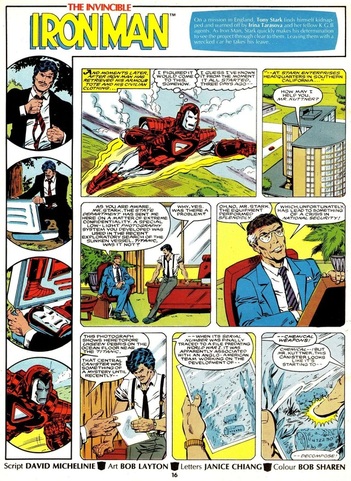 Iron Man recap boarder.
As we rapidly approach issue 130, the sidebar on Transformation is getting more and more excited about the “Cover to cover Transformers action”. It claims this development is entirely down to readers demanding the backup also be Transformers, and is in no way shape or form dictated by Hasbro and having a spare four issue mini-series to hand.

On Grimgrams, we get a clear sign that the Decepticon logo on Rodimus back in issue 119 may well be the most celebrated goof of the comic’s run to date as we get another two letters on it (out of how many they received I wonder?), from Paul Rytter of Blaydon and Robert Burns (not that one) from Manchester. Grimlock confirms my theory that the logo likely wasn’t Dan Reed’s work by revealing it was slapped on by a very junior stubbie who didn’t know better.

Vikash Shah from Kenton also writes in to point out the folly in trying to make an Annual teasing cliff-hanger out of the threat to Goldbug from Galvatron when the very next issue showed the Autobot alive and well. Despite Grimlock’s suggesting the real tension comes from how he escaped rather than if, it’s hard to disagree with this point.

In the backup strip, Iron Man turns out to be in London because photographs of the Titanic (almost topical as the wreck had only been found two years previously) have found- not a priceless necklace- but a canister of super secret dangerous chemical weapons that somehow no one has improved on in 70 years. Stark’s visit to the UK is to interview a Titanic survivor that was connected to the weapons project to find out how bad it is (answer: Very), but the KGB have bugged him and are now going to be after it as well as he uses his new special underwater Iron Man costume to go find it.

The portrayal of London is somewhat better this week, though the house the ageing scientist lives in looks pretty much exactly like the sort of shack you’d find in rural America rather than anywhere in the UK. Still, despite the slightly random way the Titanic is included the plot is still building up nicely and we should be heading towards a fun underwater fight.

Robo-Capers returns to the adventures of the aliens from Planet Zip for the first time since their planet was blown up in issue 100, they’ve relocated to the moon and I’ve now realised I must have seen this issue at some point when I was a very small child as the alien they find there (a big ball with a giant foot) looks exactly like something I used to draw in my own crap little comedy strips. And I thought I was so original as well.

Next week, with another Witwicky coming out of the woodwork soon it’s time to touch base with Buster (who is still trying to touch more than Jessie’s base), in the second Bob story in a row based around water. But on Wednesday there’s even more water as Megatron continues to battle Action Force by the Thames.

But before both of those things, it’s London Film and Comic Con this weekend, and it gives me the chance to rub shoulders with the one and only Bob Budiansky! And also Lalla Ward. Huzzah!