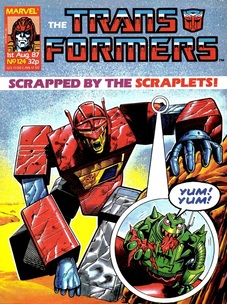 Where've you been Goldbug? Polishing your mirrors?


Now here's a bizarre fact, I mentioned three weeks ago that Don Perlin was drawing Goldbug as Bumblebee with a different head, but suddenly on the first page of this issue the little yellow Autobot gets his proper body for the first time, despite this originally being the second half of an American issue.

Presumably this just marks the point in the day Perlin finally got the right character model and he just couldn't be bothered to go back and correct the first 11 pages, but it is odd how neatly this works in terms of the British presentation of the story.

Poor old Goldbug won't be keeping his new look pristine for long though as he faces the menace of the Scraplets. As hinted at last week, these are basically sinister tribbles, small cute things that multiply like mad and eat like there's no tomorrow, with their diet being robots in this case. They're comfortably on the top of the second tier of ideas Budiansky introduced to the franchise, having a surprisingly enduring appeal, with various comic writers throwing in name checks for them before their rather sweet television début in an episode of Prime. 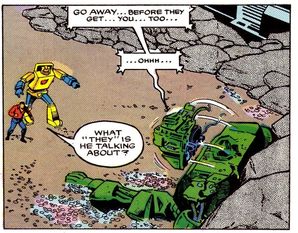 The way to get ahead.
The logic behind them is somewhat skiffy, perhaps unsurprisingly for a writer who almost certainly came up with the idea of "Naturally occurring gears and levers", so a lot of your enjoyment of this issue will depend on whether you buy the idea of a species that floats through space in a big cloud "Evolving" the ability to disguise itself as nuts and screws (strangely this veers onto the territory of a Douglas Adams joke from Life the Universe and Everything, presumably a coincidence as that sort of literary reference isn't typical of Uncle Bob). However, if you're prepared to roll with it there's some fantastic surreal imagery here of the little mites changing and jumping on much bigger robots to munch on them.

The potential threat of the Scraplets is very much kept alive as well, when in the crater Goldbug and Charlie encounter the still just about hanging together pilot and- after an exposition sequence that seeds the idea of there being a mythical substance that is supposed to be a cure- we get the pure Hammer Horror moment of his head just popping off at their feet.

Whilst they're having the back-story explained to them, Blaster is fighting the Triple Changers in what is by far the weakest segment of the story. This is thanks to the combination of them well and truly having been grabbed by the Scraplets and the power of his electro-scrambler, meaning they're not a huge threat and it's only when Blaster himself falls into the crater and becomes infected that it looks as if he might not finish them off solo. 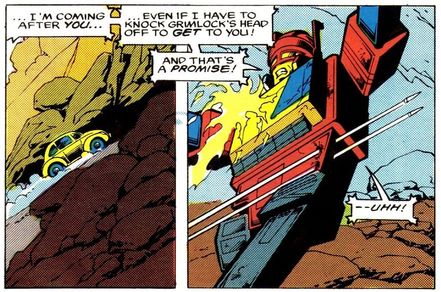 And your little dog too.
This brings us into the big moral dilemma at the heart of the story; Blaster orders Goldbug to come help him fight the Decepticons, but Charlie points out that all this will do is infect Goldbug as well. He has captured a crushed Scraplet so if they flee now they might find the cure before it's too late.

So that is Goldbug's choice, help his friend despite the risk to himself, or abandon Blaster to an uncertain future with the hope he might be able to save him at a later date. In theory this is good solid drama and the scene of Goldbug fleeing whilst Blaster curses him should be fantastic.

However, it falls down badly in execution. Firstly, Blaster is being an immense dick even before Goldbug won't respond to his radio message, mocking his supposed friend for not joining the fight earlier. Things get worse as he thinks Goldbug is running out on him, with his calling the yellow fellow a coward and screaming that he's going to "Get" him. Yes, the lead "Good" character of the book actively threatens to kill his sidekick. It's rather unpalatable and totally at odds with the light comedy surrounding it.

Secondly, no good reason is offered for Goldbug not just answering Blaster's call straight away and explaining things briefly to him (by the time Charlie suggests this it's already too late and they're being ranted at), after all this is exactly the same sort of situation that Blaster waxed lyrical on last week, he'd likely be at least a little understanding.

Unless Goldbug knows deep down in his fuel pump that Blaster is just a horrible person and that running away as soon as possible is the best idea of all.

Fleeing doesn't work though, Goldbug picks up a Scraplet on the way out, and is quickly falling apart on the road with Charlie able to offer him little comfort (and why is the narration so keen to emphasise the human is thirsty? Hmmm) in a nice dramatic cliff-hanger that neatly sets up the second half of this duology. Though that's not what we'll be getting next week...

The second half of this story isn't nearly as effective as the first thanks to an unexciting fight scene and the complete absence of Ratbat, not to mention the poor handling of Blaster. However, the Scraplets are well done for what they are, there's still some nice comedy (notably the racist soldier finding out he was sold a lemon) and the ending is appropriately tense. 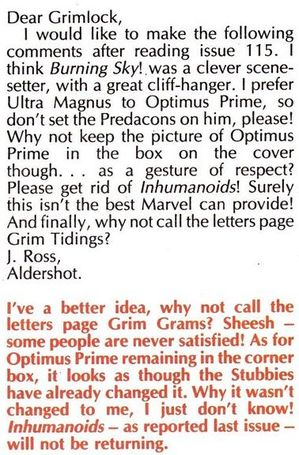 This will never happen.
Perhaps strangely, Transformation doesn't mention next week's big crossover once, with the UK team apparently finding the return of Captain Rik as part of another Ricicles competition more exciting than the prospect of a guest appearance from Action Force, with the promotional duties being left to the Next Week page.

Over on Grimgrams the Dinobot feels more like his old self, and mocks the suggestion of J[onathan?] Ross from Aldershot that the page should be called Grim Tidings. As well he should, that, and any variations on it, is a terrible idea and one I'm glad we won't be seeing in any way shape or form with future letters page hosts.

Grimlock also confirms that there are no plans to feature the Duocons (give it time!) and the obvious fact the announced début of the Throttlebots has been put back a week. He also seems fairly apathetic on the subject of Inhumanoids.

The Iron Man of 2020 and Spider-Man of 1987-Assumimg-You're-Reading-the-British-Edit continue their fight, and there are some interesting curveballs thrown into this fairly stock idea for a first meeting between heroes. The best is that Iron Man is hamstrung by all his weapons only being designed to be lethal meaning there's little he can do to hold back despite not wanting to kill Spider-Man (interestingly he doesn't seem to know who the web ﻿crawler﻿ is, thinking he must be some sort of law enforcement agent).

Spider-Man is also very well handled, becoming more and more pissed off at (what he assumes to be his) Iron Man's attempts to do terrible things to a small child- not helped by Stark saying he only needs "tangible remains"- resulting in a fantastic faux cliff-hanger of him going full on berserk in beating the snot out of future boy.

To round things off we get an AtoZ on Buzzsaw and Cliffjumper and a fun Robo Capers about an overly literal robot servant which I'm specifically mentioning to let you know Lew Stringer is now doing the three panel comedy strip in Doctor Who Magazine. As this is published by the Panini phoenix that rose from the ashes of Marvel UK it's very much as if he's come home. 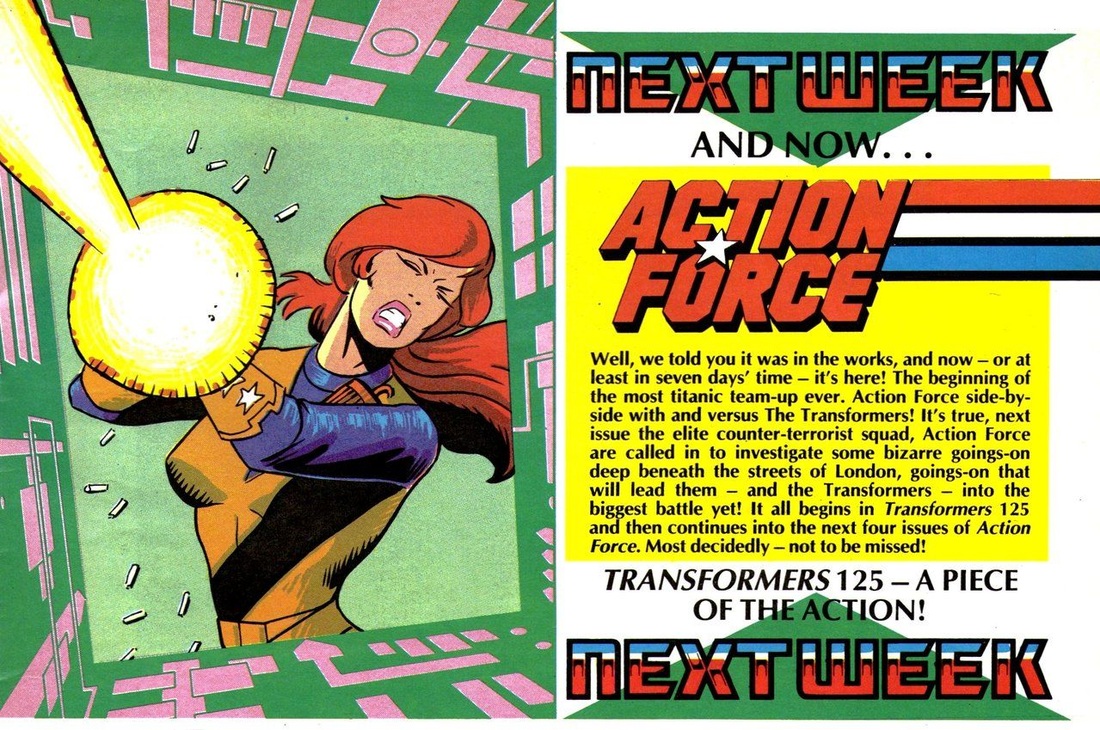