Leader of the Pack. 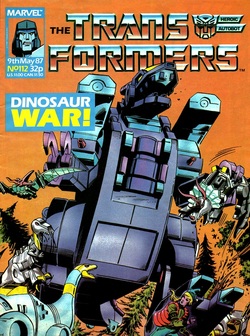 
"Someone has undertaken hostile action against us, Autobots!"
"Yeah, and I don't think he likes us much either!”


I don't usually start off by talking about covers, but this week we reach a fairly important moment in the development of the comic as this Herb Trimpe effort will be the last time (with one exception during the Underbase saga) one of the American covers is used until Wildman and Senior become entrenched on the parent series in the early three hundreds.

There are two straightforward reasons for this, the first and most basic being that it throws another 12 pieces of work a year at the local artists, and as a former struggling freelancer himself Furman can appreciate the need to help them out by creating more bill paying opportunities.

The second, and more practical, reason is that most of the American covers between now and then simply aren't up to much, with this (though still cropped and re-coloured) easily being the last especially good one for a very long while. Not every British created cover is going to be a stone cold classic, but on the whole, both covers for every Budiansky written story from now on will easily trump the one they were originally published under.

Of course, the main reason I'm starting with covers is to put off talking about the actual comic, as, after a solid if unspectacular first part, things really fall apart in the second half.

The idea is simple enough, Trypticon's attack on the Ark and threatening of Rachel inspire Grimlock to reassess his attitude towards both humans and Autobots and thus make the decision he's not good enough to be leader. But this admission coupled with his bravery in taking on Trypticon results in the rest of the Autobots deciding he's exactly the right person for the job. That's not Earth shattering stuff, especially with the hindsight of knowing where this is going, but could have made for a harmless enough issue. 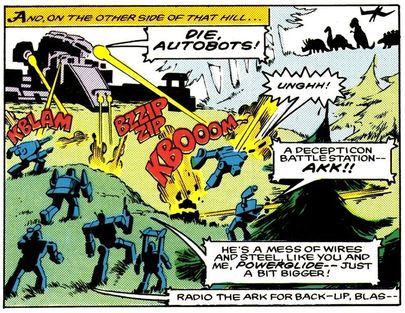 Cybertron's finest.
Where it falls down is the execution, Trypticon's attack on the Ark is extremely poorly realised, with the Autobots standing about crying like giant robot girls as the Decepticon uses missiles that makes them more dizzy than Vic Reeves. It's an embarrassing showing that involves none of the usual strategy or tactics that make the best Transformers fights more than just characters posing at one another, something not helped by the action sequences being somewhat beyond Don Perlin's normally reliable talents, I think this is the first really large scale fight he's had to deal with on the book and he falters badly.

The Dinobots vs. Trypticon side of things is handled better- helped by the other Dinos being wonderfully snarky and Rachel being one of the stronger human characters we've had recently. However, it's Ratbat who steals the whole issue without even getting his face on panel as he decides Trypticon has exceeded his fuel allocation for this mission and recalls him. It's a nice gag and means Trypticon can exit stage left with his threat undiminished. 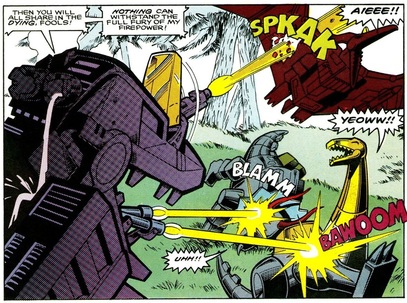 He's giving them a good licking.
But this just brings up the flaw in the Autobots making Grimlock leader for having saved them, he didn’t, by their own logic they should really make Ratbat their new boss as their salvation from their own ineptitude is entirely down to him. For all their praise Grimlock doesn't really show great leadership during the fight either, he charges after Trypticon by himself and the Dinobots chase after him for the hell of it, he doesn't coordinate them in battle at all; it's just a giant lizard slap fest.

There's also the problem of knowing that Grimlock's contrition isn't going to last and he'll almost immediately return to being a massive tool (though the UK will at least have more of a gap allowing him to forget his lesson here). Unlike the more mature humour behind the idea of Ratbat being in charge dim Grimlock is a one note joke that might have been amusing if it ended here, but which will become very tiresome long before the return of Optimus Prime.

With the main plot being so weak the most memorable non-Ratbat part of the story is Trypticon- whose toy comes with the little car Transformer Full Tilt (who can even be seen stuck on his chest in this issue) - being given a completely different little car Transformer sidekick called Wipe Out who has been created for the comic by taking Tailgate and painting him black. It's an odd decision, but Wipe Out is at least a fun little sycophantic git who captures and torments Rachel for his boss’s sadistic whim.

Overall, this is a very poor issue and a worrying sign of things to come with the Grimlock plot, the whole thing is best summed up by the ending where Rachel stares off into the middle distance and gives a vague nonsense speech to her colleagues that's on the same level as that which closed out Shooting Star!, making her Joey Slick with tits.

One final thing to note about the comic itself, is that, at 8 issues, this ends the longest run of uninterrupted Budiansky stories we'll be getting in 1987, based on this form that's probably a good thing.

Null and Zoid.
This week's Transformation sidebar is unusual in that it's not promoting a current comic but apologising for the absence of one as we’re given an- albeit vague- explanation of why the promised monthly Zoids hasn't appeared,  reading between the lines it seems to be a licensing issue. They still try and suggest it could eventually happen, but the tone isn't very optimistic. It might also be worth noting at this stage that Zoids was exactly the sort of stepping stone to bigger things for Grant Morrison that Furman would have hoped Transformers would be for him.

On the letters page Grimlock prints the first letters from readers about Prime's death, ostensibly to deal with questions over how Prime can die here but be alive in 2006 (to which Grimlock can only be vague at this stage) but it's telling that the generally negative attitude to the story is not only printed but is left completely unchallenged.

There's also a letter from Cameron Egerton of Callander which, amongst other things, asks about the cartoon follow up to the film mentioned in prior issues. Oddly Grimlock claims the series is still in production and as such they don't even know when it'll be broadcast in America yet, let alone in the UK. This is despite the fact Five Faces of Darkness actually started broadcast in September of 1986, and indeed the entire third season had gone out by the end of February. This is a rare (at this time) example of an answer being completely pulled from Furman's bum.

The highlight of Inhumanoids this week is when the characters make a Transformers joke ("The rocks are moving! Transforming!" "More than meets the eye!"), but is otherwise more dull than a comic where the heroes are attacked by rock men right out of Galaxy Quest ever should be.

I've not really talked about Robo-Capers recently, it's basically continued to be a solid source of decent silly sight gags but there's not been a huge amount to say about it. This week though, the latest instalment of Forgotten Robots of History has some fun with the 1950's SF B movie boom, and also gently pokes the book it's in with a collection of pulp magazine covers that includes one titled "Any excuse to put robots on the cover comics", implying the whole thing is a cynical cash in.

Next week, it's a seminal moment in the life of young James Roberts. But between now and then is the UK release of Age of Extinction, will I survive the latest three hours of bombs and boobage or will next week's entry be nothing but me whimpering? 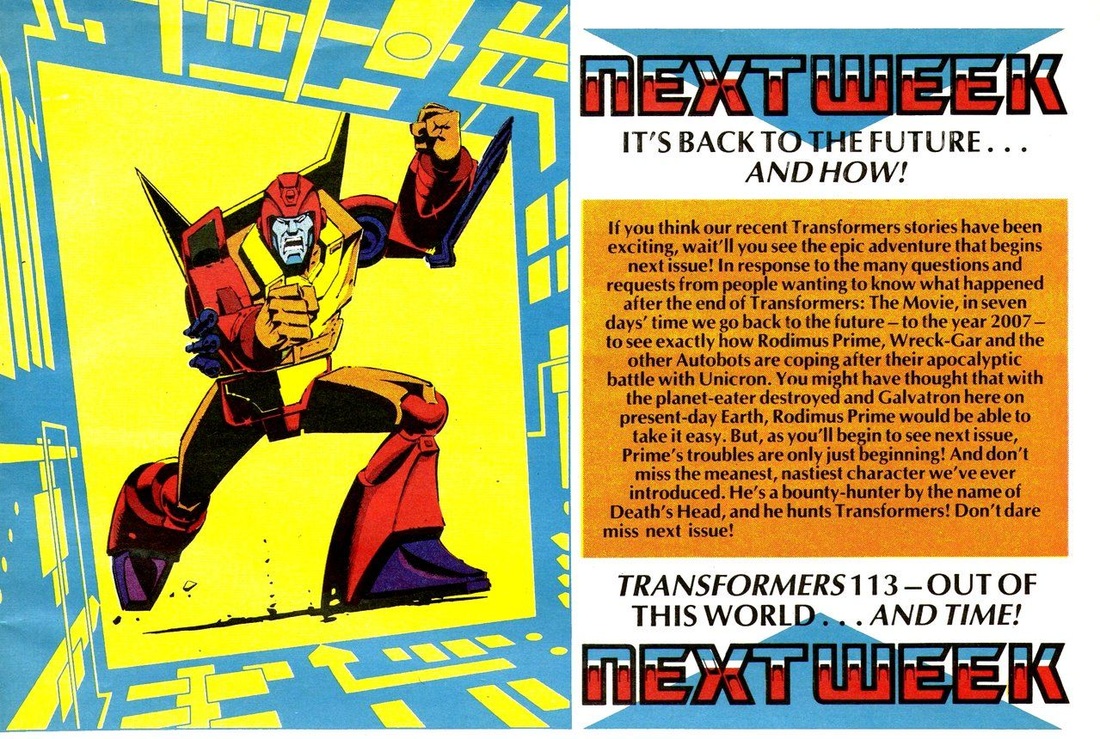 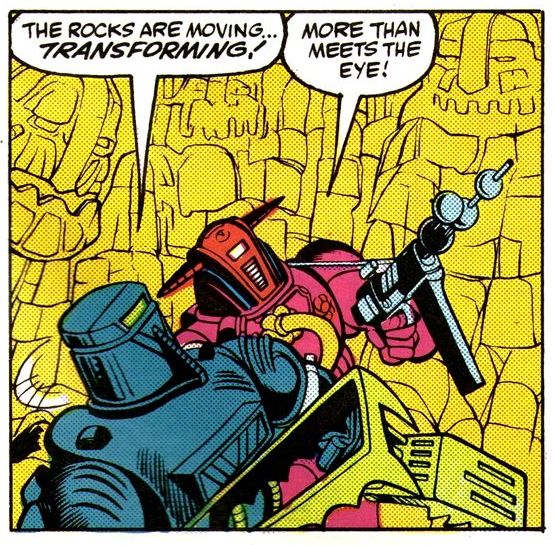