And it seems to me, you lived Your Life Like a Candle in the Wind. 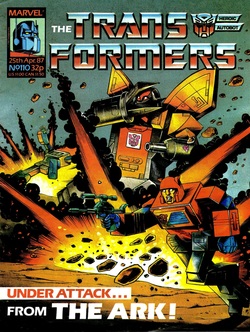 
They wouldn’t go to all this trouble just to catch a car thief!


So, let’s talk about the good stuff first. Optimus Prime’s funeral is indeed a thing of beauty; he gets a memorable eulogy and the imagery of his body being shot off into space is extremely striking. As, perhaps surprisingly, pretty much the only funeral the character has ever received (his faux one earlier in the year being the only other than springs to mind) it more than does the job.

The only real odd moment is that it’s Perceptor, a character who only showed up at the Ark five minutes before Prime died (and there’s been no hint the two knew each other back on Cybertron) who gives the speech, especially when out of the 1984 characters Wheeljack is present. Though I suppose it’s possible that everyone else shot their bolt when they buried Prime (in later years the Autobots will wish they’d gone for that simple option on this occasion) and have nothing left to say, otherwise though this is a very nicely done scene. 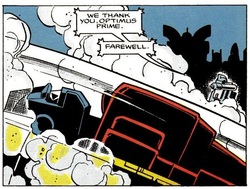 The good bit.
Unfortunately though that takes up less than a page of the issue. Whilst the balance between the good and the bad was about 50/50 last week, here just about everything is given over to the bloody Mechanic.

After Ratchet suffers the indignity of being frozen by his own gun, he heads back to the Ark with the Mechanic and Juan sneakily following, as the wannabe super villain is determined to move beyond simple car theft. For some reason the Ark’s new security system switches off completely when Ratchet enters the ship (Omega Supreme seems to have designed it on the assumption the Decepticons will play fair and only attack when everyone is fully outside) allowing the humans to enter the hallowed halls as well.

Stories where the heroes’ base turns against them are a fairly common trope in fiction; in this comic alone this story takes place roughly halfway between Raiders of the Last Ark! and The House That Wheeljack Built! that both play with the same idea (there’s also that episode of Beast Wars). In theory it can provide a nice tense bottle show, a particularly fine example is the Star Trek: Deep Space Nice episode Civil Defence, but frankly of the Transformers examples House is basically the only one that doesn’t suck my hairy balls.

So, and I can’t quite believe I’m writing this... the fat stupid human gets the drop on Ratchet (shooting him in the knee with his own gun) before throwing the massive On/Off switch for the Ark’s defences back to on so it starts attacking the returning mourners. It’s an embarrassing read, with the Autobots outside being pretty much totally inept at taking the fight to the ship. The idea they don’t want to damage the Ark because it could take them home one day may be set up for its eventual return to space worthiness, but it basically comes out of nowhere here just to give a flimsy excuse for them just sitting there and taking a pounding. This sort of story works where the good guys have to be ingenious in overcoming their own defences, there is absolutely none of that here and it makes for a somewhat dull read. 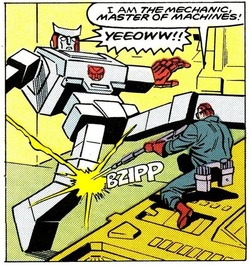 How is this not a meme?
Things get even sillier when it turns out the on/off switch isn’t just a lever but actually some sort of mass displacement... thingy that lets the Mechanic pick up giant pieces of machinery as if they were as light as a feather. It’s completely baffling as to why this would need to be used to turn on the defences; surely a simple button would have done the job? Or does Omega Supreme have weak wrists?

The defeat of the Mechanic does at least have a bit of ingenuity to it, Ratchet briefly revives Prowl and has him drive at the be-goggled fool, using his innate fear of the police to send him packing (ha, suddenly going to the effort of grabbing those police lights doesn’t seem so stupid after all does it?). Though a giant robot needing a cunning plan to make a fat human run away means this is probably the most embarrassing day of Ratchet’s life.

The issue does end with Ratchet reenergised over his work, but as the next time he’ll get to be the main lead in a story in Furman’s first arc on the American book he’ll be right back to the frustrated and depressed state he was at the start of last issue. Meaning that all you actually need to read of this two parter is the funeral stuff, everything else is completely pointless, and indeed more than a little painful. It’s baffling that Bob will decide the lose end of the Mechanic having his hands on Ratchet’s tools will need a quicker follow up than he gave to the fate of the Cybertron Seven.

Otherwise, the only really interesting thing here is Perceptor seems to be leading the Autobots. That’s a state of affair we’ll all wind up wishing had remained the case. Even the cover isn’t up to much this week, Omega Supreme is trying out a nice lilac Autobrand and Blaster is pulling a face that suggests he’s straining too hard on the toilet.

Three weeks before it gets good again.
For the second week in a row, the sidebar on the Transformation is given over to increasingly desperate attempts to assure readers the comic will be getting good again in a fortnight and they just need to hold out a little longer. The closing “Stick with Transformers. The future is here- and it looks bright!” feels like it’s almost begging you to stay the course.

This sidebar is also the first mention of Death’s Head in the comic. It’s a sign of things to come that even at this early stage he’s being promoted as a major part of the comic, it’s likely the quickly knocked out Bryan Hitch one page comic ensuring Marvel owned the copyright on his was being done at about the same time as this. But more on that when we get there.

On the letters page, Grimlock reveals the comic has been getting a lot of mail lately from people worried they’re too old to be reading the comic, a sign of the maturing of the original readership. He assures Victor MacMahon from Dublin (13) and Paul Seales from Benfleet (15) that you are never too old. Though obviously reading this when you’re 32 would be an insane thing to do.

Inhumanoids has a fantastically trippy sequence this week when Liquidator has the back-story of the monsters explained to him by some talking trees. It’s mildly amusing to find that the D’Compose creature’s “One” weakness is sunlight, which I would say makes him a less than fearsome foe.

Next week the yo-yo quality continues as the Dinobots return and for the first time in an absolute age in an American comic. Are Grimlock’s chances of becoming the new Autobot leader better or worse than those of England winning the world cup (still technically possible as I write this)?


Tally of damage to human life and property since Optimus Prime committed suicide because he couldn’t handle the idea of having hurt innocents even in a computer game:

No human suffering this week (bar the Mechanic's panic attack), though several Autobots do get bashed about. 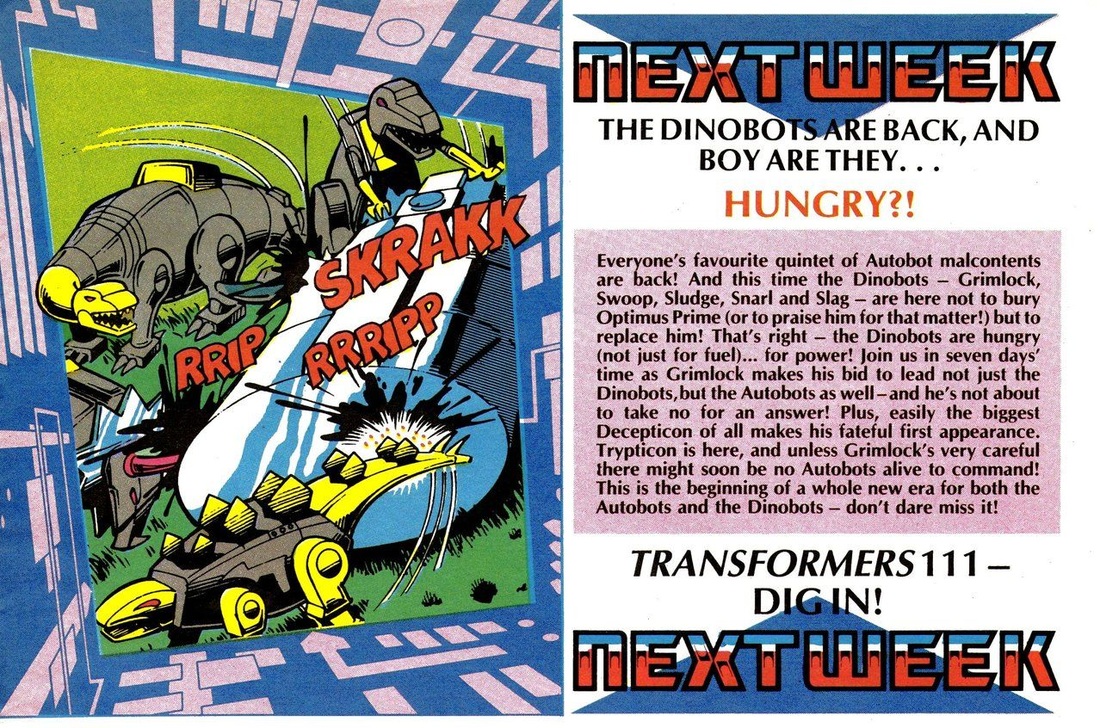