Welcome to the Jungle. 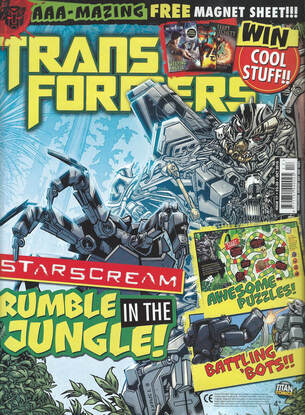 
I am being systematic! I am working diligently! I am the very model of a loyal Cybertronian. And still... nothing.


Our little Robin Etherington trilogy of filler concludes with an issue that is somewhat surprising considering the last few months. It’s the first comic since the opening issue of volume 2 (depending on how you count the drones there) to only feature characters from the popular Transformers movies. Not a single bit of promotion for non-film toys is to be found within.

One wonders, with the move to bi-monthly just around the corner, this was a specific request to give the flagging book a push by focusing entirely on the guys kids have heard of. Or it might be that there simply aren’t any notable toy only characters left to push and Etherington himself decided to stick to the robots people actually care about.

Either way, The Kingdom of Starscream gives us a clue as to both which character to expect and what sort of story. Though in practice, beyond South American natives worshipping aliens it’s not that specific a spoof of the Indiana Jones film we all pretend never happened. 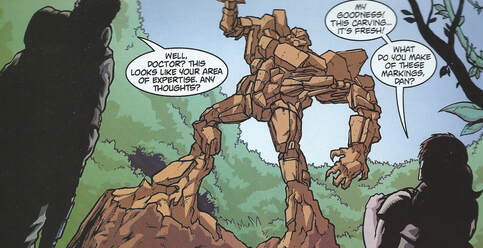 Third party toys have come a long way.
In terms of films, Starscream started off as a hyper-competent thug with just a little bit of snark, but who became more and more Chris Lattad till he was a full on comedy coward by the time of Dark of the Moon.

This inconsistent characterisation means it doesn’t seem that strange here that we open in Peru (no Paddington crossover sadly) on a clearly barking mad Starscream digging a hole in the ground and ranting and railing about how he can’t find any energon in the dirt. Before some local natives come out of the jungle and surprise him.

12 weeks later and we cut to Ironhide (yay!), Ratchet (yay!) and Lennox escorting a conservation expedition led by a Dr Redway (surely not so named because she has red hair?) to investigate why so much of the Peruvian rainforest has burnt down in recent weeks. For fairly tenuous reasons, despite Lennox throwing the phrase “More than meets the eye” about.

Luckily for the NEST budget, it turns out the mission does definitely fall within their remit, as they find a statue of Starscream in the jungle. Which Ironhide immediately wants to burn to the ground because he’s Ironhide and we love him. 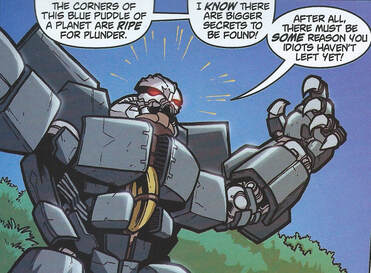 Carry on Screaming.
There is an attempt to make a serious (and more topical than ever in 2019 with recent deliberately started fires in the Amazon) point about indigenous tribes without contact with the outside world. But the real point is they follow a trail of similar statues to an old Inca temple, which Lennox recognises as such, letting Redway reveal they’re a bit of a Martin Scorsese as they expected him to know more about comics than culture.

Luckily, before she can reveal her thoughts on Ant-Man Vs. Hitchcock, Starscream attacks, taking a chunk out of Ratchet. But luckily for us, the medic is of course really hard to kill and he just brushes it off.

The absolute highlight here is the epic rant Starscream gives about how there has to be energon on Earth (because why else would the Autobots stay? Which gets Ratchet pointing out that’s not their thing) and he’s totally going to grab all of it and hey, he’s worshipped as a God by beings he may or may not recruit but will probably crush...

Sneaky putting flame over the standing Skywarp to try and make it less obvious.
It’s hugely entertaining and ends, when he realises he’s outgunned, by him blowing up a huge amount of jungle and flying off. The Autobots manage to contain the fire, and we end on an odd note of pathos as we’re asked to consider the loss of innocence of the tribesmen.

It’s not the most in-depth of issues, especially compared to last month, but the Starscream rants just about tip this into being a winner, despite it not really matching any of his contradictory characterisations. Davis-Hunt has some fun on art, but amazingly we get the Skywarp transforming art we’ve already seen twice (minus the first of the three poses) used for Starscream. I suspect there may be a new drinking game here. 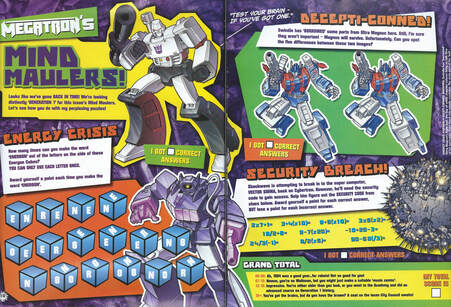 They're getting good use of that book of G1 character models.
Megatron’s Mind Maulers is Generation One themed, but this basically boils down to the exact same quizzes as usual, but with art of G1 characters alongside it. So how many words can you make of the letters on the side of a bunch of energon cubes; spot five differences in two pictures of Ultra Magnus and crack some maths questions to get access to Vector Sigma.

Starscream Talks is a full page interview with the Decepticon that reveals he’s basically your dad as he hates Justin Bieber. The interviewer makes the mistake of embarrassing him with a joke about Soundwave having just walked in as Starscream slags his fellow Decepticon off, resulting in the interview ending in a nasty human death. Appropriately enough this is opposite the colouring version of the Starscream themed cover.

Competitions this month include I Shall Wear Midnight by Terry Pratchett; Armouron: Elite Warriors books and what looks like the same Doctor Who activity books as last issue.

Bumblebee’s Guide to the Solar System hits Jupiter, with the token mention of what the comic is supposed to be about being that the gravity would crush even Megatron.

Lost in the Jungle! is a snakes and ladders style game where you have to help Starscream steal Inca cultural heritage. Pleasingly, and surprisingly considering the lack of thought put into the character profiles on the front of the issue, the cut out tokens are nearly all of Transformers actually in the comic, with only Bumblebee added to make up the numbers. 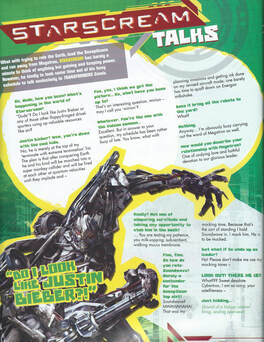 You do look quite like him...
Law and Disorder (also with a new look) shows both Barricade and Ironhide have been given some dirty money by a certain computer game company as they again open by singing the praises of War For Cybertron. More interestingly, they confirm to Harry Blackburn (12, York) that Shockwave will be in the third film, showing how that is coming along nicely.

There’s a slight slip up as art of G1 Devastator is credited to Lewis Evans (6 Telford) and G1 Megatron to Mark Hogger (12, Essex). But the signature on the former reveals that’s the one by Hogger, whose first name is actually Match.

Adam Cattell (12) asking about the Constructicons gives Ironhide the flimsiest excuse he needs to go take in some weapons practice and teach Skids and Mudflap the meaning of “Superior firepower”. Yes, he’s going to kill the Twins. Which if nothing else explains why they’re not in Dark of the Moon.

Next week, Furman is back and it’s the last monthly issue. 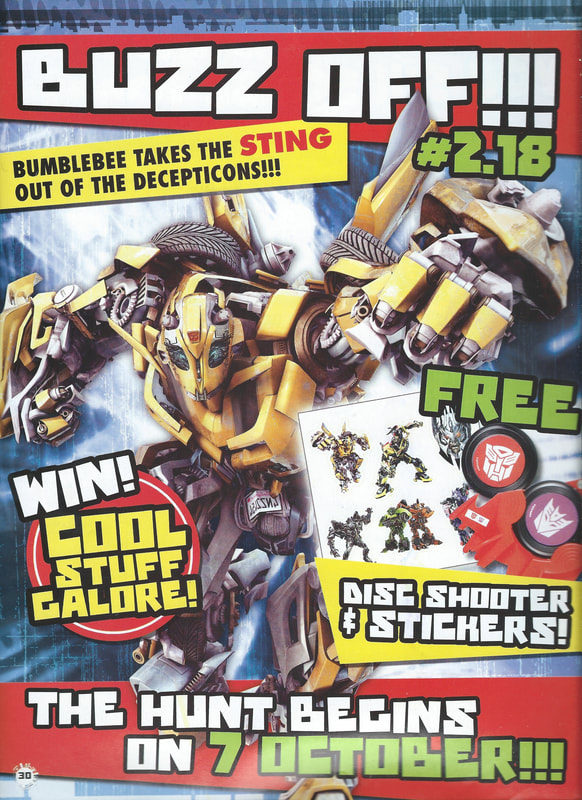