I'm the Invisible Man, Incredible How You Can, See Right Through Me. 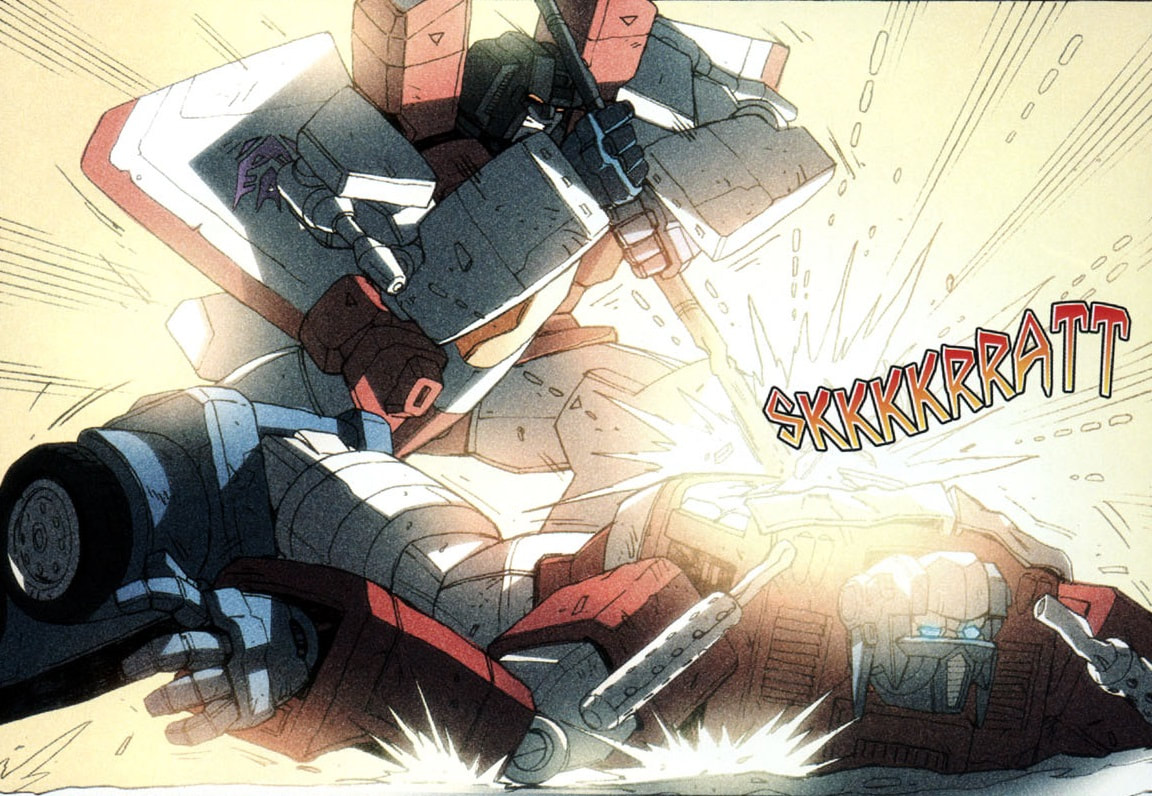 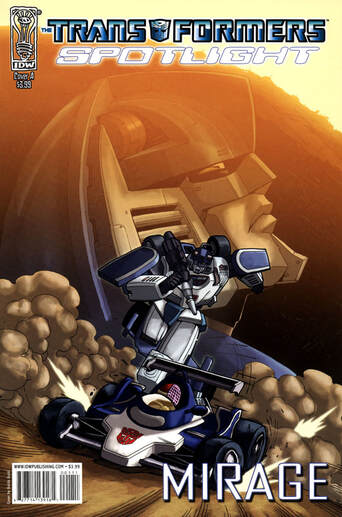 
I serve only one will in the Universe, Megatron. My own.

​
After the controversial and complicated issues of the last few weeks, it’s actually nice to hit a story there really isn’t very much to say about, either in and of itself or in a wider context, coming as it does in a fallow period of only two main continuity issues in three months.

Not that anyone could be sure that Spotlight: Mirage was a main continuity book at the time, it being set in a generic Generation One world with not a single tie to anything around it bar the character designs except possibly that, with All Hail Megatron coming, there may have been a desire to sow some seeds of doubt about Mirage. But it will in fact not be for many years till John “Continuity” Barber firmly places it.

But not where I would have shoved it.

Now, I have of course previously bemoaned that the Spotlights have not been more standalone, and it is a great irony that the moment we get a complete can be read in isolation story is exactly the wrong moment to have done one as Furman starts desperately to wrap up so many storylines. What is to come might have gone a lot smoother if this spot had been used for the Doubledealer story. Or hey, maybe Ironhide! 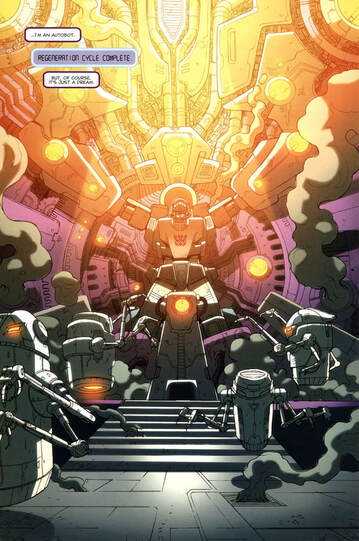 Zathras!
Instead, new writer George Strayton (though he has a reasonably impressive CV writing for shows like Xena and apparently he was in charge of “Transmedia” for the first two Transformers films) gives us something that just about predates by a whole month the idea of Shattered Glass: WHAT IF THERE’S A UNIVERSE WHERE THE AUTOBOTS WERE EVIL?!

Or rather one Autobot in this case, Mirage. Which is where the problem starts really, the reason so much media picks up on the false accusations against Mirage in the cartoon episode Traitor is that it gives you an Autobot with some ambiguity to him. Stripping that ambiguity away from him just makes him far less interesting.

And Mirror Mirror stuff only works one of two ways:

A serious exploration of the characters and their world by showing the contrast between them and their evil counterparts (as the original Star Trek episode).

Or it’s a TV show where you get to see the very likely fairly bored by now in their regular roles actors have a ball hamming it up in stick on beards and ass hugging trousers.

You can have both together of course, though notably Mirror Mirror actively refuses to let William Shatner do the Shat for more than one scene, but a comic can’t do the second and this story only really has one moment of the first. 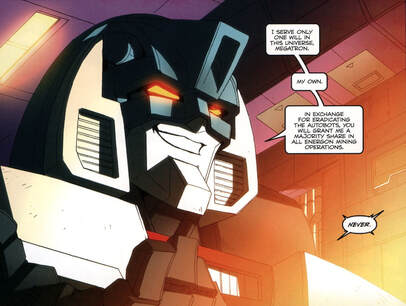 "Hey Megatron, I want paying in Bofa"
Indeed, the only moment that isn’t completely straightforward here is the framing device, opening as it does on a confusing battle between Autobots and Decepticons around something that will turn out to be called Zodiac energy, that Mirage comes into contact with. We’re not told till later that this is a cross universe energy that can hit you with your mirror image, making sense of the next scene as Mirage wakes up, pondering about his nightmare where...

HE WAS AN AUTOBOT.

What is hilarious here is that DECEPTICON Mirage sleeps in what looks exactly like the Great Machine from Babylon 5. This technically doesn’t contradict anything we’ve seen yet but having an entire wall to recharge in feels rather a waste of space, especially compared to the simple recharge slabs we’ll see later. Unless it’s a rich guy thing.

It turns out Mirage is not just EVIL here, but he’s the best of the best because once he’s on the Decepticon side, the Autobots are down to their last few men and Mirage is the only one who can find and defeat them. But he’s so cool he doesn’t just take orders, he gives Megatron sass, treats him like a bitch and demands paying in Energon company shares.

It veers so far into Mary Sue territory you wind up feeling George Strayton draws Mirage’s name in a heart on his desk. 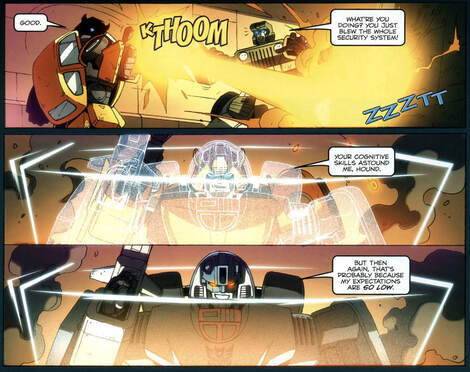 Someone hates Hound.
​It’s also unintentionally amusing that this is also an alternate Megatron, in main IDW he’ll turn out to be a socialist, here he’s a company director capitalist.

When we see the handful of surviving Autobots, you’re left with the feeling that they might not prove to be that much of a challenge as they’re so desperate that Hound is now the science guy, explaining the Zodiac (named for the McGuffin in Transformers Zone) McGuffin to Prime as Jetfire is dying on the floor, despite Ratchet’s best efforts.

Honestly can’t tell how much of the out of character writing is to genuinely suggest these are alternate versions and how much is just bad writing. 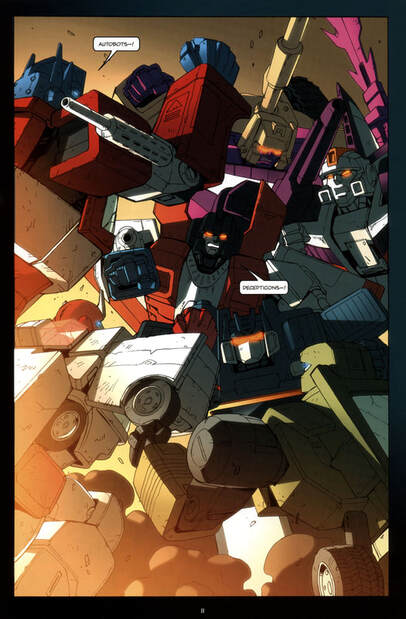 Behind the scenes at IDW at this time.
​At this moment Bumblebee returns from patrol and shoots the security system. When Hound notices this, Bumblebee mocks his intelligence and turns into Mirage, letting the Decepticons in!

So yes, Mirage’s big contribution that only he could do was open a door.

Even though Starscream is the field commander (Megatron stayed home for plot reasons), Mirage is so amazing he takes charge, giving the Autobots one chance to surrender. Which they don’t take, so an oddly visually confusing fight (I suspect some panels are the wrong way round it feels like the ones of Mirage flinging Ratchet aside should be concurrent rather than broken up by some Prime action) ensues that the Autobots actually wind up doing better in, with Hound even pulling of Soundwave’s head.

But all for nowt, as the Amazing and Sexy Mirage has a gun to Jetfire’s head, and so, with the promise on one will be hurt, Optimus surrenders.

But when Mirage gets on the space phone, Megatron actually has the more sensible idea of killing everyone instead. And if Mirage doesn’t do it, he won’t be paid.

It does seem unfair to give Mirage this extra condition when he’s done his open the door job and Starscream is the goon commander. But then, he is so dreamy.

So, this is where we get the one real attempt at a character beat, Optimus pointing out that, as a mirror image to regular Mirage, EVIL Mirage has always had doubts and uncertainties and can still change to be a better man. It’s clearly aiming for the same sort of tone as Kirk’s “One man with a vision” speech to Mirror Spock at the end of Mirror Mirror. Which is stirring, inspiring and gives the message that we are not slaves to our baser natures as Spock gives one of the most bad ass responses in TV history (“Captain Kirk, I shall consider it”). 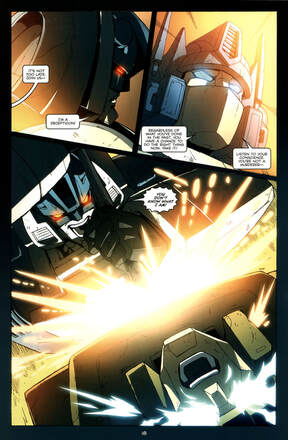 He's really being hounded.
​Here, Mirage just stabs Hound to death with a trident (mirroring how Starscream was stabbing Optimus in the regular Universe at the start of the issue, the only real clue that we’re seeing alternate versions of the same battle. So maybe Hound got better later as well), so Prime chucks him at the Zodiac and then we’re back in reality, with Autobot Mirage waking up after recovering from his wounds in that other battle, wondering why he dreams of being a Decepticon.

Though hilariously, this comic has so little going on in it, the reveal that normal everyday Mirage is an Autobot is milked for two pages, the second being a full spread of him just driving along in F1 mode on Earth (use that to work out the placement folks).

This is not a bad comic as such, despite managing to make a meal of some of the storytelling in a very simple plot. It’s nice to see Mirage’s toy spec hologram powers get used for the first time since the early days of Marvel instead of his cartoon invisibility and though I don’t think it’s intended, how much of a hard-on the comic has for EVIL Mirage is quite funny.

The art is also strong, though perhaps not Guido’s best and it does start a long run of him only being given terrible comics to draw. 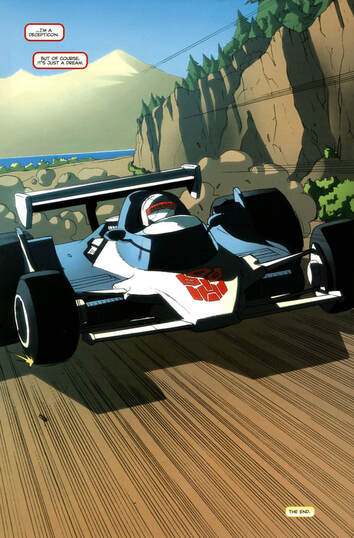 What a twist.
But it’s also a nothing comic. Not because it’s standalone, not because it’s simple. Nothing wrong with either of those things, but it is deeply uninteresting, going from A to B in (usually) the dullest way possible. Plus, everyone just sounds odd.

The best thing I can say is that there is nothing to say. After the last couple of weeks, a comic to breeze through is a wonderful thing and saves my fingers from a lot of typing.

Next week on the other hand, brings us back to the main plot and a Furman favourite character. 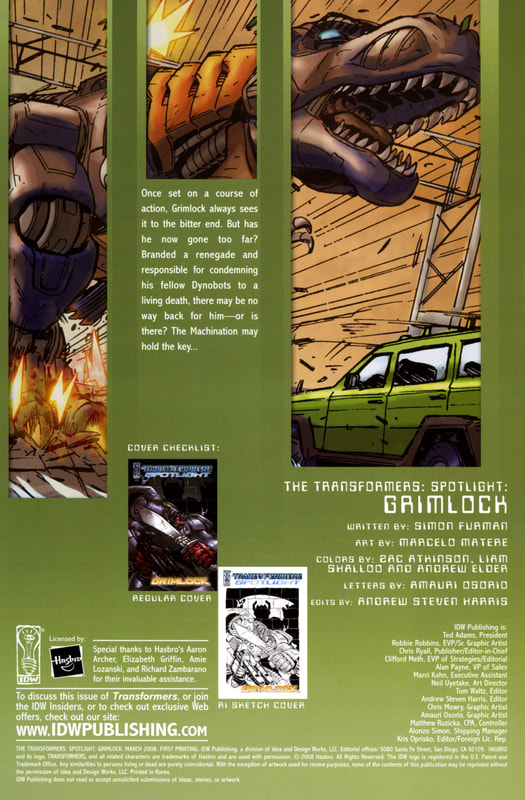