There's no Time for Sin and Vice, Living in an Amish Paradise. 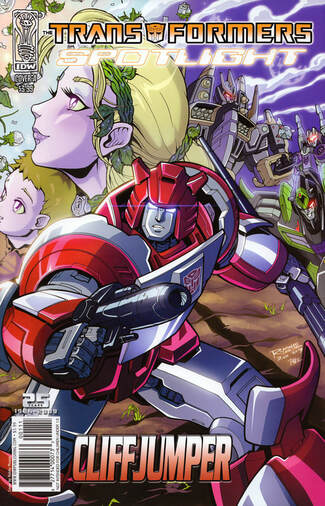 You give them to girls, silly.


I wound up not making much of it (largely because Secrets and Lies was too bad a comic to make covering it an appropriate celebration), but this week saw the tenth anniversary of Transformation. So, just a quick thank you to everyone who’s read over the years, whether you’ve been there from the start or jumped on more recently.

And what better way to celebrate 10 years of doing this nonsense every week (give or take), than with... let’s just let me have a look at my notes here... a comic no one really remembers? Indeed, of the five Spotlights that get thrown in with All Hail Megatron, it’s easily the one that gets the least attention. It doesn’t have the historical backstory of Blurr, the fan writers turned pro of Jazz, the toy promotion of Drift, nor the gimmick of Metroplex. And unlike all of those stories, the titular character will not go on to have a big important role in the rest of the run, indeed, this is the only comic where Cliffjumper gets more than an minor supporting role in all of the first IDW continuity.

But, obscurity doesn’t automatically mean a bad comic, and going in, it was actually possible to be optimistic about a Shane McCarthy written comic as Cliffjumper has had a couple of nice moments in All Hail Megatron as a weird little fucker, including the payoff to the best gag in the series. So a fun little comic about an OCD psychopath feels well within his capabilities to pull off. 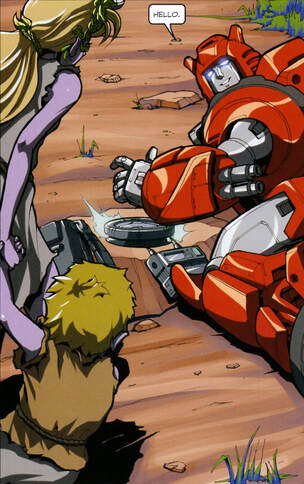 He was a punk, she did ballet.
But McCarthy obviously immediately wants us to know this is Serious Business as we start on a flash-forward, of Cliffjumper sitting in a dark room, promising an off-page voice that, even though there are reinforcements coming, they’re going to be OK, as the weakening other person worries they can’t hear anything.

Looks like we’re in for a laugh a minute.

Over the page and into the past, the contrast is made as strong as possible with a bright sunny landscape and a bright-eyed Cliffjumper trying to fix a transmitter, as what can only be called an anime girl and a small anime boy come up and say hello. And from this first moment, you can immediately tell that this is going to be a modern day update on those episodes of the cartoon where an Autobot got a fleshy girlfriend. Yes, a quarter century after Powerglide and Seaspray, it’s Cliffjumper’s time for the ladies.

And I don’t mean anime as an insult, Robby Musso is clearly trying something different, to the point I’d not have automatically recognised it as his art, in what may be the first complete breakaway from the style Dreamwave established as he tires to make something “Softer” to match the more romantic side of the story.

And perhaps this should be the first warning sign, “Cliffjumper gets an anime girlfriend” is exactly the sort of story fans, especially newer fans, would eat up from other authors if done a few years later. Making that no one really remembers this all the more suggestive. 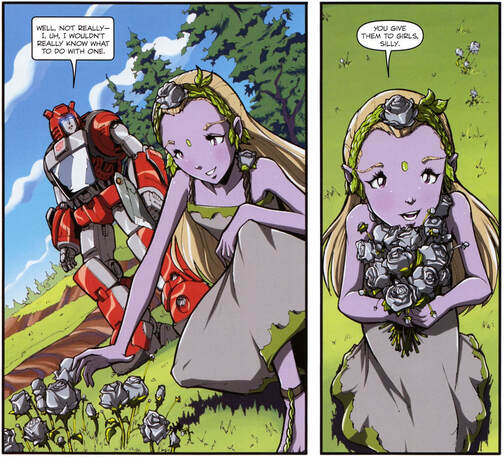 Remember, the only girl who he knows is Arcee. Who'd prefer swords.
The woman, who turns out to be called Kita, is fascinated by a metal man, having to check the real “Autobot” is not inside the suit (though I think Cliffjumper would like to be inside somewhere), and being amazed that someone “Not of here” can speak their language. Which starts Cliffjumper trying to explain the concept of a Universal Translator, before deciding to simply call it magic.

Which, in a sign of great minds thinking alike, giving up on describing advanced tec and just saying it's magic is a joke James Roberts would repeat a few years later.

This friendly banter has them shaking hands, gets Cliffjumper introduced to her little brother Coll (short for Collin) and invited down to the farm (previously run by their now dead of sickness parents) to stay, even after he explains his ship “Crashed” and that this area of space isn’t safe for him.

In the farm, and in the first of a couple of attempts to forefront his alien nature, he plugs into an energon converter whilst explaining he doesn’t eat like them (just a few issues before eating and especially drinking gets introduced formally) and that he’s not scared of the People in the Sky who are after him, there are just more of them. Which worries Kita as hurting another being is the greatest evil in their low tec society, but Cliffjumper promises he’s a good guy and offers to help out around the farm whilst he’s waiting till it’s safe to send a distress call.

Which makes it feel very obvious where this story is going. But then, last time there was a Transformers comic like this, the farmers turned out to be hideous tentacle faced energy suckers, so it could go either way.

"He's just a normal man" "What do you mean, a normal man?" "An innocent man"
The next day out on the farm, Cliffjumper accidentally burns Kita when she touches his hot in the sun metal arm, revealing he doesn’t feel things like that like she does. She’s not annoyed though, instead gathering some flowers and, when he asks what you do with them, she goes even more big eyed and says you give them to girls.

Which, again, in a comic done at another time, would have people losing their minds and become a huge big much repeated meme.

But before he can show her more of his hot metal, a pointy evil looking ship arrives and lands at the farm, where the generic and nameless Decepticons aboard trying to ask Coll where “They” are at gunpoint, meaning they also capture Kita when she runs out the foliage she and Cliffjumper are using as cover. 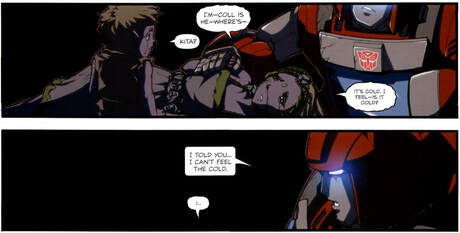 "I don't actually own a fridge"
And this is unfortunately where the portrayal of Cliffjumper goes odd, as rather than a little guy, he’s now suddenly the most dangerous Autobot of them all, taking out several of the searching cons with a javelin stick that pops out of his back, to the point their leader thinks there must be at least five fighters out there.

Him using a pointy weapon adds to the feeling that McCarthy came up with two pitches for a Spotlight: Drift, and he simply turned the one that didn’t sell into this. It would work just as well, if not better, if it was the story of a just left the Decepticons Drift running into all this and be far more plausible than Cliffjumper, best remembered for failing to hit Megatron when shooting at him with a clear line of fire and a massive gun in the cartoon, being this much of a killing machine.

After Kita insists that Cliffjumper is just a soft boi, the ‘Con leader repeats McCarthy’s standard thing about the Autobots being as bad as them, that makes this feel oddly placed coming after we’ve had Optimus Prime reject their previous acceptable loses policy and frankly I’m bored of his One Big Idea at this point.

The Decepticon also turns out to be wrong after Cliffjumper surrenders (they’re after him for killing five of their colleagues), but to no avail as he drops Kita to the floor, before throwing a grenade Cliffjumper has to shield her from, before using the distraction of another ship arriving to drag her and Coll to the barn, where we re-join the opening of the issue as she dies feeling cold, as Cliffjumper reminds her he doesn’t feel heat, before crying. 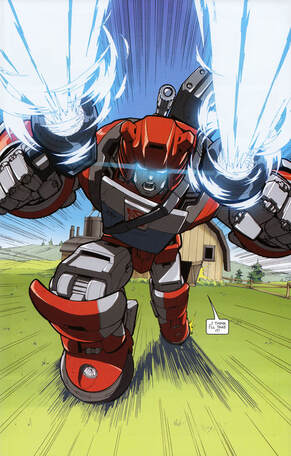 "So anyway, I started blasting"
Though the cartoons have done them, we haven’t really had a proper attempt at a romance in a Transformers comic before (I guess Skids and Charlene would come closest), and it’s unfortunate that the first one ends in a fridging. Especially as it’s an ineffectual fridging, Cliffjumper’s angst and despair over this will never be mentioned again and never influence any of his behaviour.

Outside, the leader of the reinforcements is dismissive of being called in for just one Autobot, until he hears the description “Red” and is immediately terrified. Yes, Cliffjumper is famously the most deadly Autobot.

Unless he thought it was Ironhide.

Still, it turns out to be fear that’s well placed, as Cliffjumper comes out and kills everyone, before dumping Coll on a neighbour and going to re-join his own people. Where I presume a long time passed before All Hail Megatron so he can get over this and become happy light watching guy.

There is one fantastic and very funny visual gag though, of Cliffjumper using the head of one of the Decepticons to hammer Kita’s headstone into the ground.

At this point, we’re only a couple of years away from IDW embracing Transformers love stories with great success, indeed they’ll arguably play a big part in bringing in new readers. And they’ll often be messy, tragic and take a long road to work out. So in many ways, this should be a forgotten gem, something to point at readers who came in later as an issue to try if they cried over Cygate. 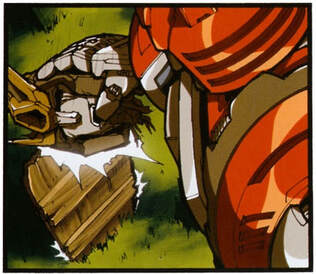 A society that never invented the hammer.
But, though the flower scene is cute, it just doesn’t work because so little time is spent developing it. The extent of her interest in him is she likes big hot red metal and he’s apparently just enjoying having the chance to put his feet up. A couple of pages giving over to making more of them, which is after all what is supposed to make the ending sad, and less on Cliffjumper being Rambo, could have made a huge difference.

It’s also completely predictable from start to finish, repeats ideas McCarthy has already wrung dry and doesn’t really feel like it’s a comic about the same guy from All Hail Megatron. A few nice lines and Musso clearly enjoying leaning into the anime side to try something different stops it being terrible, but it’s as shallow as the grave Cliffjumper digs at the end.

But next week, there’s definitely going to be more to talk about as we finally stumble over the line and into the finale for All Hail Megatron. 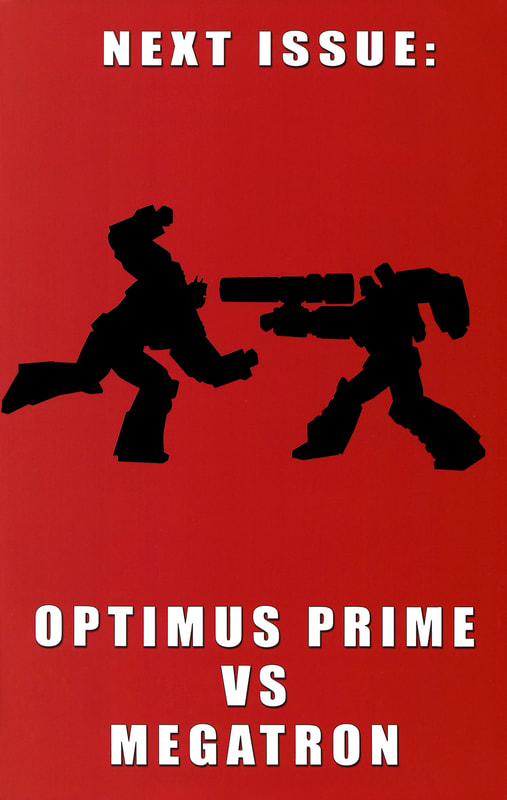