At the End of a Storm, There's a Golden Sky. 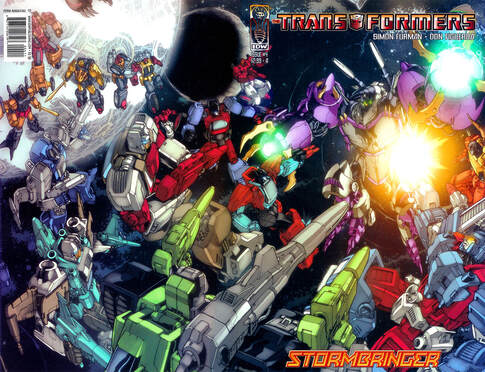 Bottom line though, if it comes to a choice between blitzing Cybertron and disobeying a direct order from Megatron... the planet is toast.

One quick piece of housekeeping to start with. We’ve now hit the first instance of something that will become far more common as we go along and the line increases: Comics published on the same day. Which order I’ll cover two (or occasionally more) issues released at the same time is largely going to be arbitrary. In this case, finishing Stormbringer before hitting the next Spotlight seemed the sensible move.

I’ve enjoyed Stormbringer far more as I’ve gone along with it for this project than I was expecting, but must admit to trepidation in approaching the finale as my overriding memory was the climax was a terrible copout.

Something not helped by the fact the opening is a full page spread with yet more endless meaningless narration from Prime over it as Thunderwing arrives (“Fate—crushing, inexorable—cannot, will not, be held at bay indefinitely!”). 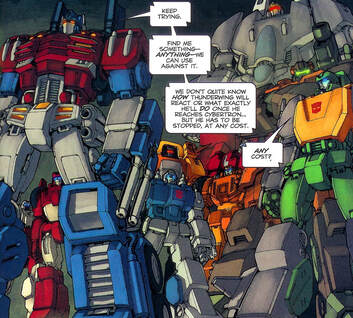 Scoop: Thinking of a plan.
In Bludgeon’s base, there’s some conversation about how destroying the control axis was pointless as it turns out Thunderwing has a homing instinct and automatic destructive reactions.

Now really, the obvious way to end the series would have been not to destroy the controlling machine, but have the others fight Thunderwing whilst Jetfire works out how to operate it and shut down the Pretender safely. A climax that would have neatly used the elements already set up by the plot.

Instead, Jetfire is going to have to go through Bludgeon’s files and work out what the hell Ultra-Energon is, whilst the Wreckers make a last stand. With Optimus prepared to sacrifice the planet if needed.

Something Razorclaw and his crew on the Decepticon ship Thanatos are also considering from orbit. But it turns out Razorclaw is something of a sentimentalist, and decides to wait till the last second in order to see what the Autobots manage to do. Though there’s no way any of them is going to more than bend Megatron’s orders, push comes to shove, the planet goes. 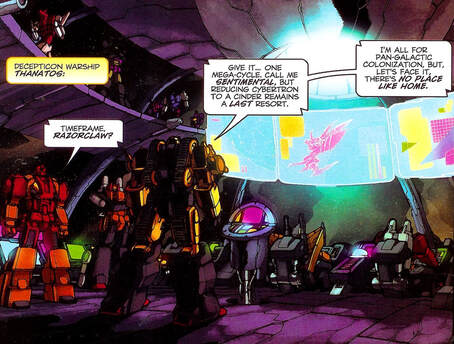 Dramatic standing in shadows.
What the Autobots are doing is watching, as Thunderwing just stands there. Turns out there’s something of his original personality left, and his mind is filled with the mockery and ridicule he faced. And especially Megatron telling him he’s a misguided idiot and that the Pretender project is shut down.

Meaning Thunderwing is the first, but by no means last, super Decepticon to have Megatron living in his head rent free.

That thought of Megatron is enough to kick things off, as Thunderwing goes on the full attack. Beginning a fight scene that basically lasts the rest of the issue. Starting with Scoop’s Wreckers (and some of Prime’s crew) trying their best. Including Topspin showing off an unlikely knowledge of 1920s Earth mountaineers by quoting “Because it was there” as his reason for going one on one with Thunderwing.

It’s a small moment, but Roadbuster’s small insincere “Yeah, right. Hoo-Haa” battle cry fits in nicely with what we’ll find he was going through at this time in later stories. 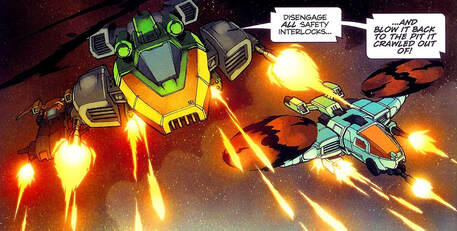 Goes as well as you'd expect.
Despite them not doing well, this last stand of the Wreckers impresses the watching Decepticons enough for Razorclaw to decide to really bend their orders and decide to help, but still under the condition that once the ship’s weapons are ready, they’re pulling out and nuking the place from orbit.

It’s the only way to be sure.

At the same time, Jetfire is doing his best to make defeating a creature that took two full armies to stop last time with less than half an issue left look reasonable.

It seems Ultra Energon is unstable to the point it only really works for short sharp bursts, so all you’ve got to do is wear him down with a full attack.

Now, in terms of the story, this really doesn’t make any sense. Thunderwing has already flown all the way to another planet and devastated it and then flown back again. If U-E is only good for a brief power-up, how is it not already worn out?

In the grander scheme of things, this makes the Ore, the entire reason for making Earth a major location in the war, fairly useless. I can appreciate not wanting to make it all-powerful, but for such a lynchpin of the new setup to be so fatally undermined so quickly was definitely a serious mistake.

Shockwave is an idiot.
In the battle, the Wreckers are nearly defeated, when the Decepticons join the battle. Which is a nice moment (and, again in retrospect, Spinister being a member of this crack commando squad is hilarious), but there’s only really time to get a page out of it.

This is largely because, now his canon fodder troops are on their last legs, Optimus has decided to join the battle. Whilst the leader holding back makes sense, that’s somewhat out of character for Optimus as we’ll come to know him. He’s also had Dogfight get the Centurion robots up and running for extra firepower, and in practical terms they contribute just as much as the named Decepticons do.

As the countdown to the Decepticons bombing the planet runs down, the amazing plan of Optimus Prime comes into play. With a shout of “Thus ends NOW!” he bravely steps forward and...

Shoots Thunderwing in the face. 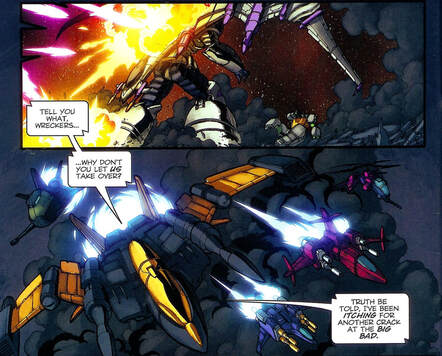 Which is a ridiculous amount of time to devote to just one action and is probably the biggest example yet of something today’s comics couldn’t do with their shorter page count.

The entire time, Prime is giving a speech in the same ponderous nonsense narration we’ve already been subjected to far too much of. All stuff about laying his demons to rest that should in theory mean we never get a conflicted introspective Prime again, but that will not be the case.

I’m not even sure who he thinks he’s talking to, would Thunderwing be able to hear him over the sound of being shot in the face, even if he was cognizant?

Still, being shot in the face by one guy does what the combined Wrecker/Predacons/Drone/Flying to Nebulos and blowing it up couldn’t, and Thunderwing is stopped with just one second on the clock till the bombing (with all the Bond references Furman is about to throw at us, it’s amazing it doesn’t go full Goldfinger and stop at 007). 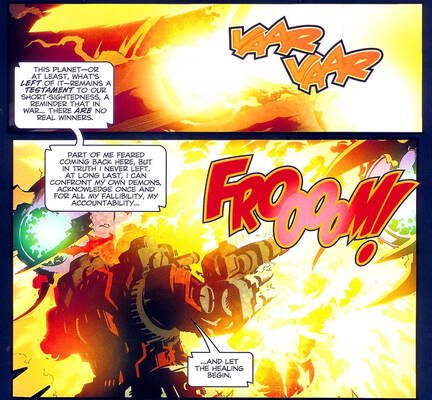 Three full pages of this.
The Decepticons’ role is then further minimalized by a time-jump till after they’ve left (imagine if one of those three pages had been given to some acknowledgementbetween the two sides at their success), leaving the Autobots just standing around looking awkward. Though Jetfire does at least promise to look into wtf Bludgeon was up to.

Which he has managed before Prime has even gotten back to base as the scientist puts a call in to the Ark, revealing much has been deleted and doesn’t make sense, but there’s a lot about something call “Regenesis” and a planet called Earth. Meaning a change in course...

And that’s the story of how Optimus Prime came to walk through a door in Infiltration.

That was indeed much better than I remembered, even it was only a basic big fight scene it’s still a well done one.

Right up until that ending. Climaxes have always been Furman’s weakness, and the combination of the length of time given over to shooting a guy in the face with how seriously it gets treated makes the whole thing risible. 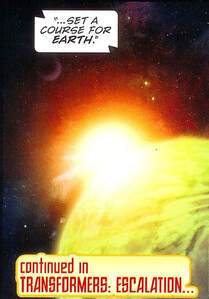 Where we came in.
As a whole, treating something that’s quite silly in far too serious a manner is the best way to describe this comic that is at heart about a giant monster stomping about. I still came down on the side of enjoying it overall, but definitely more for the art than much of the writing. If the original plan before IDW reacted to the Infiltration complaints was for this to be a subplot or maybe even a Spotlight, it’s hard not to feel it wouldn’t have done better in that more compressed form.

Compression is what we’re getting next week though, in more ways that one. As an artist I don’t think anyone ever expected to see again returns and Nightbeat has some small problems to deal with. 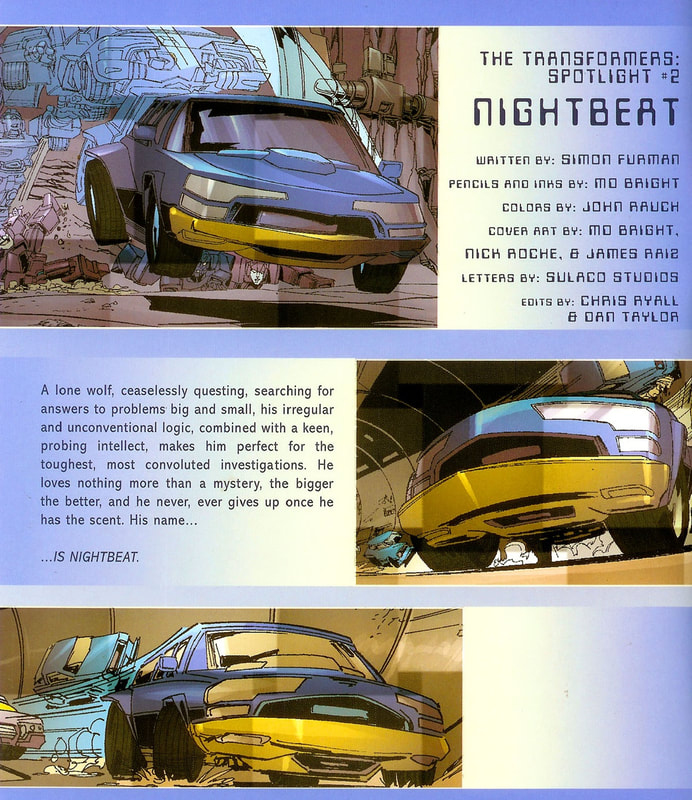