We're on the Highway to Hell. 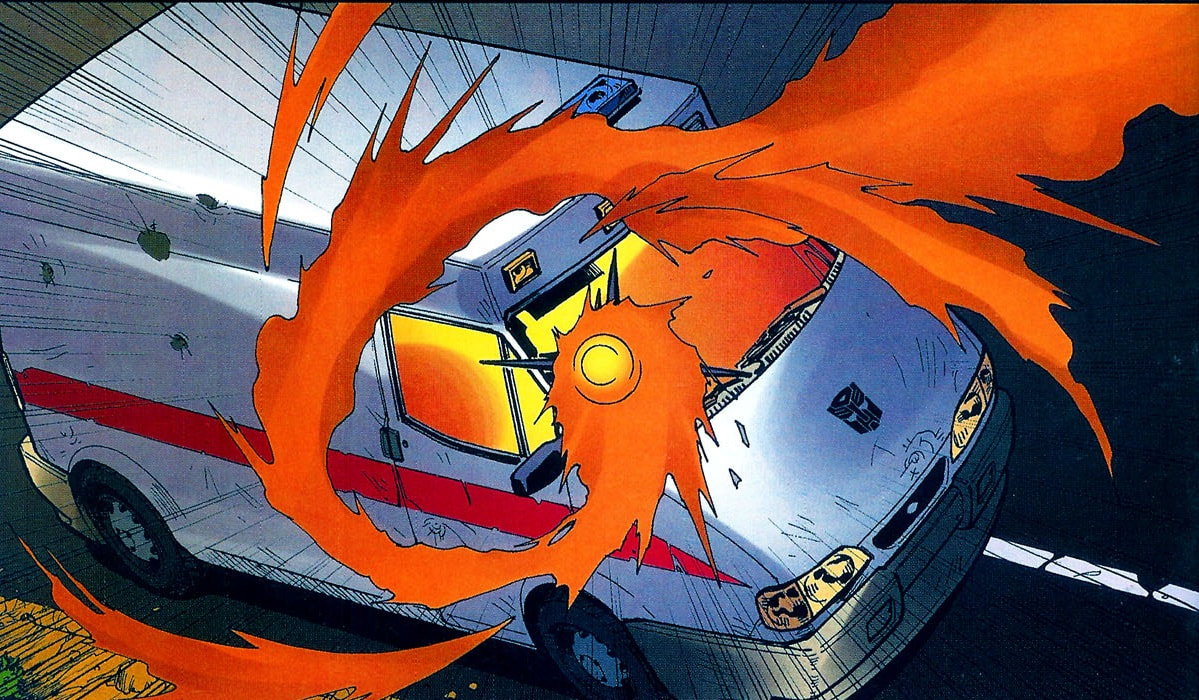 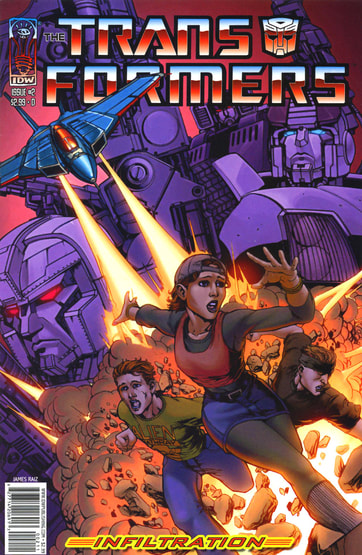 Thus far, there’s been a great deal to talk about each issue. So, it’s actually something of a relief for the second regular issue to shift things up a gear and give us an almost entirely action based 22-page car chase. Giving E.J. Su a real chance to flex his muscles.

Not that I’m automatically an action over character fan, but writing the day after an attempted coup (that may still come to succeed) in America in 2021, I’m definitely more inclined towards something that doesn’t require you to think as much.

But before we can really get to the chase, we need to get out of the cliff-hanger. Which is done by Ratchet’s holo-avatar seeming to hand over the PDA the Decepticons want so badly... only for it to be a trick, as he shorts out the avatar to put a massive amount of electricity into Runabout (the first Transformer to actually get named, more on that shortly). Which allows him to transform, fire some shots off, before resuming his ambulance mode and ordering the humans in.

It’s a neat sequence for a couple of reasons. First for showing the variety of uses the holo-avatar can be put to, making it a shame that the concept would be ignored by several following authors until James Roberts brought them back. 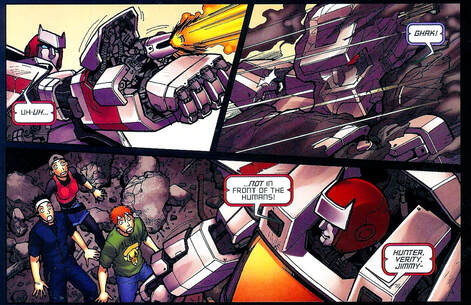 Never shoot your load into a guy's face in front of the humans.
The second is that it’s a smart way to introduce the concept of transforming to the humans (and, in theory, the reader if they don’t know it already), in a moment of drama and violence so it has maximum impact.

Oh, and for reference, the first indication of the definite date this is set comes from a banner outside Jimmy’s garage offering “2005 pre-owned vehicles”, suggesting early 2006 is indeed the setting.

And then it’s the chase and it’s glorious. Racing through highways with a massive amount of destruction (making it clear at this point that the sanctity of life is not a priority for these Autobots. Again, reminiscent of The Ultimates where the Hulk eats people cheerfully), with some fantastic art as the Battlechargers deploy their battering rams and Ratchet his speed engines.

Often in the Marvel days, you would get a sense of Furman developing a real faith in an artist, to the point of being prepared to give them a free hand when it came to an action scene. There’s very much the same feeling here, Furman knows what E.J. can do, and probably didn’t give more than a lose idea of what needed to happen here before letting him fully indulge himself.

This means the heavy amount of exposition Ratchet has to dish out on his discovery the Decepticons had targeted a human (as he now knows for what’s on the computer) and about how they’ve now broken their own rules about operating entirely under stealth and secrecy and that this means bad trouble for everyone. 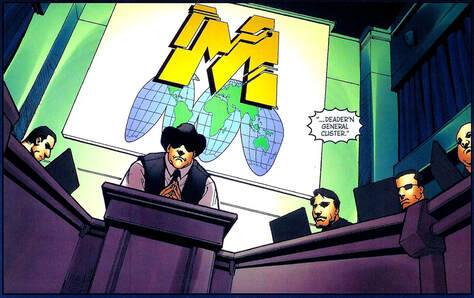 How SPECTRE of them.
But there are still some things to talk about beyond “Cool chase”. The first is a cutaway to the police finding the body of the man Verity stole the PDA from, and declaring it “Deader’n General Custer”, as some mysterious men sat in front of a giant M logo listen in to the radio chatter.

I’d not remembered the Machination (no point being coy about the name) being introduced this early in the run, but they will come to fill an important part of the backstory.

The second is a simple but telling one, a moment where Runabout and Runamuck awkwardly work each other’s names into dialogue, just like in the Marvel days. This panel has done the rounds on Twitter lately, held up as an example of Furman being out of touch as a writer to still be doing that in 2006.

It’s even odder in context though, because, as mentioned, Runabout was already named on-panel so his name being forced in isn’t needed. It’s also odd considering the next issue will introduce the Autobots with captions, something that will eventually become standard under writer John Barber (of course, there’s also the growing character page at the start of the issue, but that wouldn’t be in the trade).

We then get a second, very brief cutaway to the Decepticon base, with a still very in shadow Starscream in conversation with Blitzwing about the purity of an “Ore”, meaning they’re now ready to deal with any response to breaking the stealth protocol Ratchet mentioned, and destiny is in Starscream’s hands. 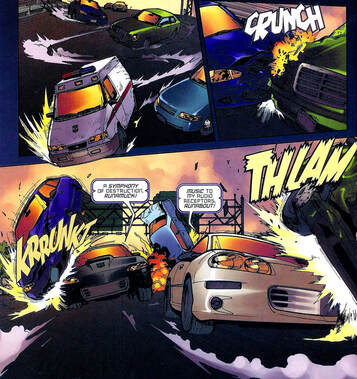 Excellent action. Dubious dialogue.
We’ll see how that works out for him.

The biggest pause in the issue though comes as Verity has finally had enough after they’ve lost the pursing cars and demands the ambulance stop, desperately clawing at the door to get out. Again, despite my disdain for her at the time, she’s the only one of the three humans who remotely acts like a real person.

Jimmy holds Hunter back and insists he should be the one to talk to her, giving us a sequence where he most definitely dopes not talk like a real human.

Starting by thanking her for giving him something that’s blown his skirt up, we get one of the most ridiculous speeches even given in a Transformers comic, with this 17-year-old (well, he was 17 last issue, here he talks about his 18 years on this Earth) using words like “Malfeasance” and “Ennui” and insisting the two of them belong on the edge. 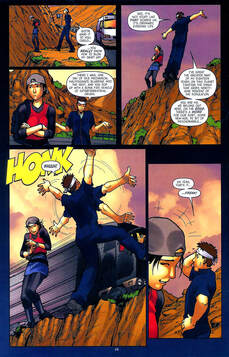 The entire page (click for enlargement) to emphasise just how awful this exchange is.
He’s a second-hand car salesman.

Tellingly though, he uses the phrase “PC” in a mocking sense (“Some new-age PC bit of psychobabble...oh yeah, that’s it... Freak!”). It’s easy to forget now, but to do that in 2006 is the same as a right-wing twat talking about “Woke” in such a derogatory way all its original meaning is lost.

Suggesting Jimmy, and possibly his author if I could be convinced Furman had enough of a grasp on how his attempts to write teenagers was coming across (though earlier Hunter had continued the trend of talking over and ignoring Verity), is a pretty unpleasant person.

This does let Hunter have a nice moment with Ratchet where the Autobot gets to share his name for the first time, though he’s still coy about what their side is actually called.

But then the hunt is back on as Thundercracker catches up to them. Luckily, help is at hand as Prowl, Ironhide and Sunstreaker (though only Prowl is named here) arrive and use their inbuilt vehicle mode weapons to scare off the jet. 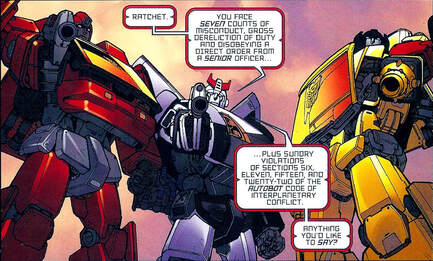 Lads.
I’d actually forgotten how heavily this early era played up the Transformers have all sorts of Bond car gadgets built into their alt-modes. Considering the films will really make a thing of it, it’s a surprise it will wind up being quietly dropped.

You would expect the cliff-hanger to be when the Autobots transform and pull their guns on Ratchet, with Prowl listing all the charges against him (ranging from seven counts of misconduct to multiple violations of the Autobot code. I’m mildly amused the first mention of that isn’t from Ultra Magnus).

But there’s an extra page where Ratchet terrifies them with two words: Siege Mode. Before we cut to an unintentionally hilarious panel of the Decepticon base. A big grey fortress with a massive Decepticon logo on the side. Yeah, those guys were definitely into stealth. I can’t remember if there’s ever an explanation for no one ever having spotted it. 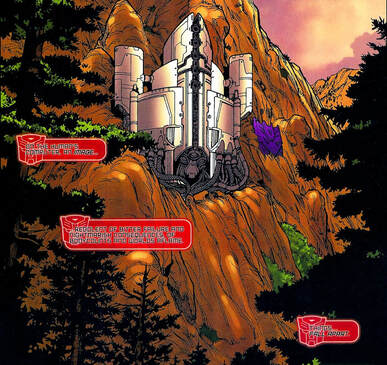 Where can those famous masters of stealth be hiding?
That Ratchet has pretentious "Things fall apart" dialogue over it doesn't help.

The bleak real-world circumstances under which I reread this for the blog may have helped, but (terrible Jimmy speech and a couple of Furman showing his age as writer moments aside), that really worked for me and is the first issue I feel can be called a solid success. There’s little depth or subtly to it, but as an exercise to show off the skills of E.J. Su it’s an incredibly fast and fun chase scene that still looks gorgeous.

And I’m still surprised at how quickly I’ve come around to being on team Verity after so many years of not being a fan.

Next week, hopefully in less volatile times, we hit the halfway point of this opening miniseries and meet the other Autobots.