And I’ll be Standing for Election all Across the Known Universe. 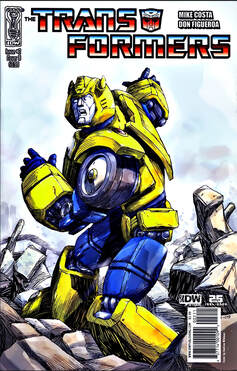 A better question is why would you want to stay?

*The Wiki and trades treat the overall arc for issues 2-6 as “Things Fall Apart”, parts 1-5. But this overall title doesn’t seem to have been used on the issues themselves (though this may vary depending on how you’re reading, if it was somewhere on the original issue, let me know).

The first thing to note here, is that the title of this issue is, like each of the five parts of this opening storyline (issue 1 being counted as a separate prologue), taken from a Brian Aldiss short story. I’ve not read it, and my extensive research (Google) didn’t find a synopsis, the results being swamped by the story collection that uses the same title. But Costa is going to have a habit of slapping literary titles on his own stories as a sign of sophistication and deeper themes, but they’ll usually be of novels and stories that have nothing in common with the comic but the most basic surface reading.

Much more on that as we go along. 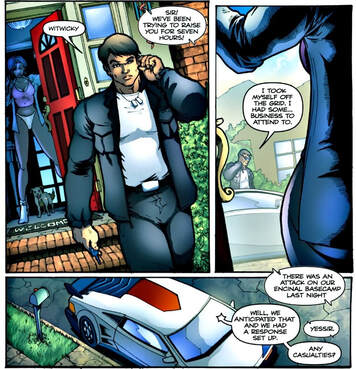 The implication the dog watched them at it is what makes it.
But yes, as teased last issue, this is the point I gave up at the time. And why? Because of the opening. Where it turns out Spike missed both the attack that rescued Prowl and Prime’s surrender (something not clear in the last issue), because he took Breakdown as his personal car and went “Off the grid,” or rather, to go fuck.

So, we start with a smug Spike leaving a house, taking a call that makes it very clear he’s been banging for seven hours straight, as a woman in her underwear watches with an annoyed face, with one angle careful to make sure we get a good close up of her ass.

Now, this is arguably hypocritical as I am a fan of the films (though equally, Mikaela is also a really good character as well as having a bum), but this is uncomfortably seedy and grotty. You can argue that future events make it clear we’re not meant to like Spike, but I don’t buy for a second that was the intent here and later twists were slightly desperate course correction in reaction to feedback, “Ha-ha, no, I intended for him to be awful. I am a great writer.” That women in not very much are a standard of Costa’s later writer, it’s easier to see this as intended to be titillating rather than disquieting.

The Unnamed Woman (I wonder at what point Costa will give us a named woman) also shows Don’s limits at drawing humans, with a body that’s 78% legs and has her wearing high heels socks. 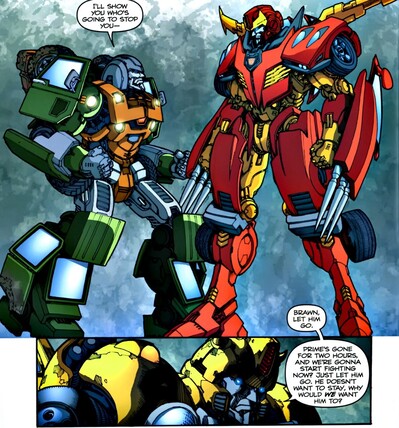 What Don is good at.
It also creates an odd moment when we cut to the Skywatch base to see why they’ve been trying so hard to contact him, revealing Optimus is still stood in his arms in the air surrender pose, and apparently has been for the hours it takes Spike to work his oil rig.

At the Autobot base, just how badly thought through Optimus just quitting was is shown by how the troops are just left confused by the whole thing, falling into different camps as they decide it’s time for a leadership contest. Because if the Autobots are famous for anything, it’s picking their leaders by election.

The camps are basically two. One represented by Bumblebee, where they’ll stay on Earth to…

Actually, at no point does anyone put forward a convincing argument as to why they should stay except to see what Prime might be up to.

Hot Rod on the other hand, argues the humans don’t want them there, Megatron is dead (an odd retcon when they knew he was alive as Starscream took him at the end of All Hail Megatron) and therefore there’s no real threat to the planet anymore, so let’s just go. Explore the Universe, find a new home. Do whatever, no one is beholden to the rules of war anymore, they can go live their lives.

Which is considerably more convincing argument than anything Bumblebee can offer. 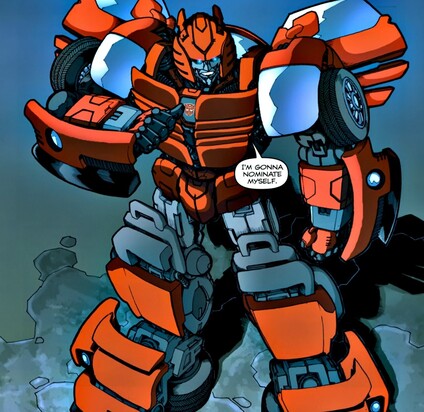 He was robbed.
These arguments will later form the basis of the split that will create the two books written by James Roberts and John Barber, but even though they clearly used this as a springboard, they actually work to make the Bumblebee position make sense. Here, Hot Rod is so obviously right, even with Brawn threatening him, that a sizeable chunk of the Autobots walk out with him.

Including Prowl, meaning he gets to be out of character two issues in a row.

Back at Skywatch, Spike has finally turned up for work, and is on a conference call with “Dad,” who is very aware Spike was not on the base during the biggest night of their operational history. But because he’s the son of the boss, he’s going to get away with it.

Meanwhile, Ratchet is trying to work out who has gone with Hot Rod (including “Silverstreak,” the first of two instances, along with “Tankor” of characters being renamed in relation to trademarks in this issue) and put together an election package. Giving us one of two great Cliffjumper moments this issue, as he gleefully declares he intends to run, in a lovely half-page panel where he just looks so pleased with himself.

Mood level: 2022.
Less pleased with himself is Hot Rod, who is out in the desert, trying to persuade Omega Supreme (who I was wrong about, he’s not the Autobot base, indeed, no one has visited him in three weeks. Bastards) to take them all off into new adventures in the beauty of space, whilst Omega flatly refuses as where the Prime goes, he goes. And as Prime isn’t going anywhere, he stays.

Amidst this, there is a panel of “Omega-vison,” where we see Hot Rod through the big boy’s eyes that have Terminator style annotations, including “Mood level: Frustrated.” Which is a mild gag, but one James Roberts clearly liked as he’ll take it and run with it when he does “Magnus-vison” later on.

Hmm, there’s sure a lot of ideas in this that later writers will do more with. 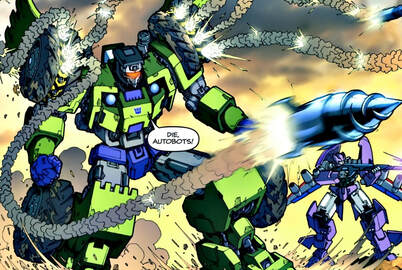 Scrapper won't make friends that way.
Watching all this is Swindle and a team of Decepticons who have been staking out Supreme for the aforementioned three weeks, largely so as to plot a revenge attack. Something Scrapper is especially keen on.

Swindle had largely been a minor character up to this point, with his most notable roles being in the original cartoon two decades earlier. His renaissance here is almost certainly down to the popularity of the Animated version, who had debuted the year before. Not the last time in this issue a character gets a suddenly bumped up role down to a more popular version from another continuity having taken off. But here at least, Costa will make a good go it, and Swindle is largely seen as one of his two best characters.

The other, Thundercrakcer, is also with the group, something that makes no sense in terms of either how we last saw him, or (if |I remember correctly) how he’ll re-enter the story in a speaking role, making me wonder if this background appearance is a colouring error.

Overhearing that Prime has surrendered and it looking as if the not held in high esteem Hot Rod is in charge, Swindle decides it’s time to attack, and an actually nicely drawn fight ensues.

It’s as Hot Rod starts throttling Swindle that the Decepticon decides to try a different tact, saying the whole thing is a misunderstanding, his people only attacked because they thought they Autobots were plotting to attack them. And what a shame we were privy to the conversation between him and Scrapper about revenge earlier, ensuring there’s no possible ambiguity at all over if he’s being genuine or not. He does at least make Hot Rod pause by asking why are they even bothering to fight at all at this point? 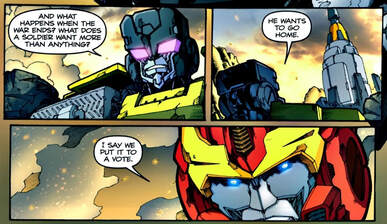 Everyone trusts Swindle.
Over at Skywatch, Spike, still annoying at his dad’s implying he knows his son fucks, decides to order the inhibitor removed from Prime, so that can have a face-to-face chat.

Though not one we’ll see this issue, making this rather a padding page.

Back at Omega Supreme, the fighting has stopped, but Hot Rod and Swindle are having a tough time convincing everyone the war is over, so why not just get along? Even incredibly nice guy Prowl is struggling to decide if saving a Decepticon is on the same wavelength as being friends with them. But Hot Rod suggests a vote to decide if they form one big happy family. 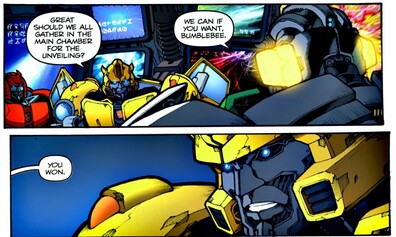 Let's see how going for the most boring guy goes.
Speaking of which, as Ratchet finds out Hot Rod and company have switched off their transponders (no wonder this war has lasted four million years if every soldier is broadcasting a locator signal at all times), Wheeljack comes in with the election result, and the winner is:

Which pisses off Cliffjumper, is a great and genuinely very funny payoff.

Bumblebee has been such a minor character up to this point, him suddenly being popular enough to win an election is a stretch and of course, entirely down to his popularity in the films and IDW wanting to cash in on that without sullying their hands with actual film content.

Though the in-fiction explanation is people like Bumblebee, and after all the recent upheaval, they want something safe, dull, and dependable. The Keir Starmer strategy.

All of which is interrupted by the arrival of a Cybertronian ship, carrying Duly Appointed Enforcer of the Tyrest Accord Ultra Magnus, asking who is in charge. Leading Bumblebee to declare “I am.”

What an odd issue. The opening is terrible, and I can totally understand why I gave up. 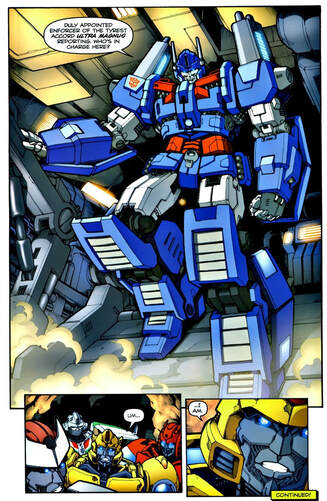 "And my first order is, get me some lip balm"
But the rest is full of good ideas. And we know they’re good ideas because subsequent writers would basically rerun a lot of them with a “Let’s do it properly” attitude. Everything here is surface level—most notably that we know straight up Swindle is full of crap—and feels like an unfinished first draft. With only a few nice moments, like Cliffjumper’s joy at going for leader and his annoyance at losing, standing out as anything other than mediocre.

The art remains variable, with the humans being terrible (General Witwicky is not recognisable as the same man) and the faces being uncomfortable. But the fight sequence and Brawn and Hot Rod facing off are great. Plus, it's easy to forget his Hot Rod redesign, all pointy and sharp, forms the basis of his more iconic look that will carry through the rest of IDW.

Still, there’s a foundation here, one that might be turned around into something better. The question is, will Costa manage it before other hands take over?

Next week though, it’s time for the kids to have some fun as we close out 2009, with issue 1 of the Bumblebee miniseries.