The Boys are Back in Town. 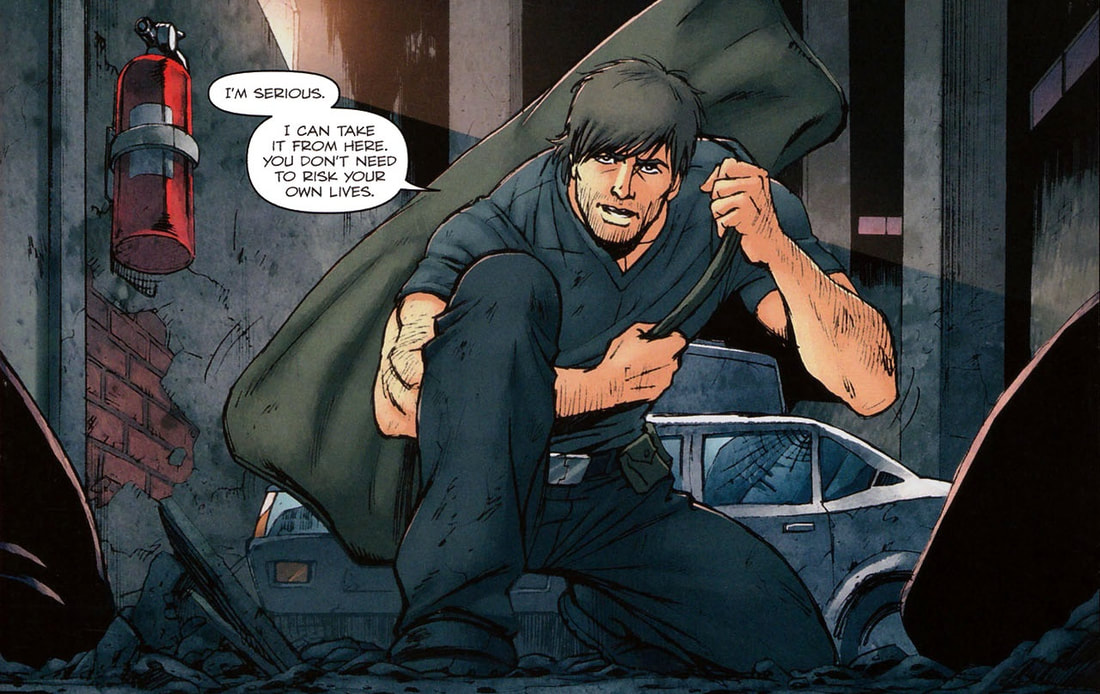 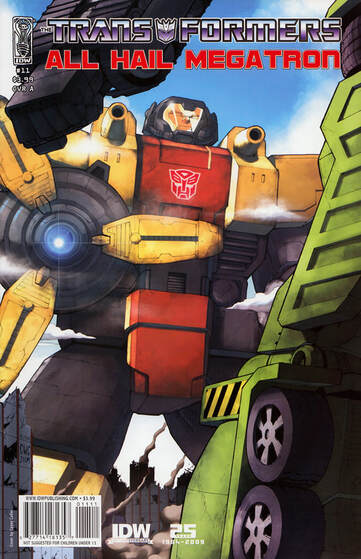 They can be anything, and we can’t tell!


After completely skipping them last issue, Shane McCarthy suddenly remembers the human characters, as we open on Spike and his super weapon, telling Sarah (looking at him like a lost puppy), Bridge and popular character Charles that they don’t have to come with him, but as Charlie boy (in what surely must be his last moment in the series) points out, if the city gets nuked, they’re all going anyway. So they go running into a double page spread of Devastator fighting EU jets, and out of the issue.

Which is an odd moment to make a double-spread of, but this issue has two, plus one full page splash and lots of very sparse big panel pages. Stretching this final battle out to two full issues was always going to be tricky, and McCarthy seems to have gone for the easiest option of dragging things out.

Megatron meanwhile, is explaining that all of this was part of his cunning plan, to have the humans come attack them as destroying the idea of the Decepticons after he’s won, to allow them to rise up as the more peaceful movement he’d originally intended when they were just doing WWC style wrestling.

Which is nonsense, And the first sign of something that will later become one of the big weaknesses in the writing of John Barber, wanting to write a grand chess-master villain but not having the skill to pull it off. So instead, and we’ll see a lot of this in the years to come, the baddy just insists that everything that happens, however unlikely, however much the events are obviously counterintuitive to their plans, was always part of the plan. 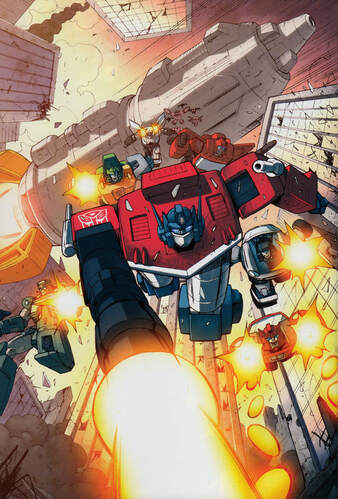 Doing a sneak attack in their giant spaceship.
Here at least though, there’s an immediate subversion that we won’t get often in the future, as Megatron is completely surprised by Optimus Prime and the Autobots falling out of the sky.

Most of the rest of the issue is a big fight, where clearly the standout moment is meant to be Omega Supreme smashing Devastator into the Statue of Liberty. Though, as with Prime’s order they try and protect the city, it makes you wonder how it has survived this long, and indeed why the entire vast area of New York they’re fighting in looks normal, with no sign of the conversions Megatron has supposedly been doing to make it mini-Cybertron.

So, for all that it is well drawn, the actual highlights are two little moments. One where Astrotrain is smug that the Autobots seem to be running, before Cliffjumper gleefully shouts at him that he’s an idiot, they’re really making room for Omega to land. The other is even simpler, just Megatron casually swatting Roadbuster away with a blast from his fusion canon. Which in the script was supposed to unambiguously kill the former Wrecker, but his stay of execution (for now anyway, Roadbuster would probably have rather died here), means this is actually a rather bloodless and consequence free fight.

So the main areas of interest come from two conversations Megatron has. The first with Starscream, who he promises will be Decepticon leader one day, and he’ll do it by beating him, that was always the plan. Which rallies Starscream around enough to have him shouting “All hail Megatron!” with sincerity. 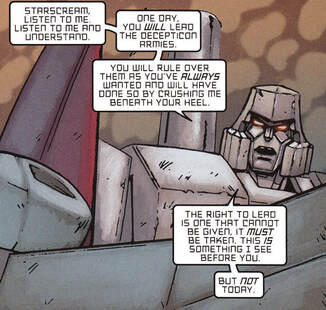 Clickbait: And you won't believe how it happens!
Beyond the retrospective humour gained from knowing Megatron will be right, but in an unexpected way, the real cheek here is how it just repeats the falling out and reunification against an unexpected attack plot from Devastation, just a year before, beat for beat. To the point Furman should have gotten a “Story by” credit.

But Furman is not the only other writer being riffed on here as Megatron and Prime come face to face, and Prime tries to say “Freedom is the right of all sentient beings”, only for Megatron to tell him to shut up. And a comic with this much recycling, including taking its name from and repeatedly using a line from the 2007 film, is in no position to mock the overuse of certain phrases in the franchise.

As Optimus Prime tries to say Earth is under his protection, Megatron mocks him, asking when the Autobots started to care, and why Optimus would come back to a planet he abandoned once and this is all just about the Matrix.

Which could be a fair point, but as Optimus abandoned Earth at the end of Devastation, that means All Hail Megatron is forgetting that Optimus returned to Earth to defend it before they were beaten by the Decepticons and exiled to Cybertron, as depicted in All Hail Megatron. 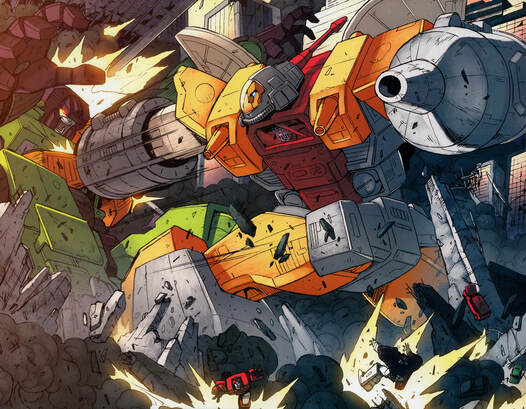 *Tall woman holding a short woman up against the wall meme*
He also smugly reveals the nuclear bomb is coming, something that, yes, has always been part of his plan and boy aren’t humans really a bit shit? Which is just a rehash of their conversation before the nuke arrives in San Francisco in the first Dreamwave miniseries (not the last time I’ll be making that comparison), so I guess they really couldn’t have fitted all the appropriate “Story by” credits on the front page.

Amongst all this, we have a few scenes of Colonel Witwicky watching things from outside the city, as he tries to evacuate before the nuke arrives (that Megatron wants to use one bomb that the US army are confident they can outrun the blast radius of to destroy humanity is another odd point), whilst working out there are now good and bad robot groups (though he’s hesitant to be confident the new robots fighting the old robots are going to be any more pro-human), before it turns out one of his own trucks, as seen in the background of a few panels in previous issues, was really a robot all along as it transforms and starts attacking!

Which is our most overt advert for a toy in IDW yet (even more so than Drift as he doesn’t have a toy yet), going beyond just having an established character be in the current design, as this entire scene was at the request of Hasbro, to try and get people to get the Universe Dropshot toy. His role being to sit around doing nothing for issues before one page of action is about as successful as most of the later forced toy promotion will be.

For some reason, this causes Witwicky to have a meltdown as he finally gets the concept of “Robots in disguise”, screaming in panic that the robots that can become vehicles could be anyway. 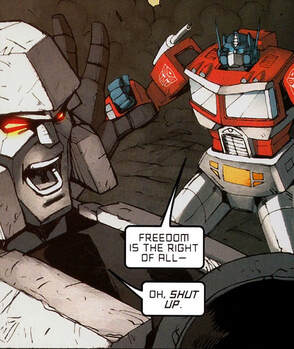 Me, six issues ago.
What a concept.

That turns out to be true as the EU bomber (which has an outdated design, either because an old flyer is being used to get around Soundwave’s jamming of modern tec or, though it’s not apparent yet, because this is also Universe toy promotion, take your pick), is both unmanned and has a big Decepticon logo flashing on its flight console.

Which means that, yes, rather than a “The EU is going to nuke New York” cliff-hanger, we have a “The Decepticons are going to nuke New York” cliff-hanger. Really shaking things up as we head into the final issue. I’m actually starting to wonder if McCarthy is trying to write a comic where the entire message is intended to be pro-nuclear disarmament.

This may well be the shortest one of these I’ve written yet. It’s not a terrible issue, certainly not by the standards of this series, but it’s a one issue fight dragged out to twice its length (in a series already dragged out to twice its length), surrounded by a couple of lazy rehashes of recent, including one very recent, comics doing similar things better. Which might be the only time someone says that in reference to the first Dreamwave miniseries. 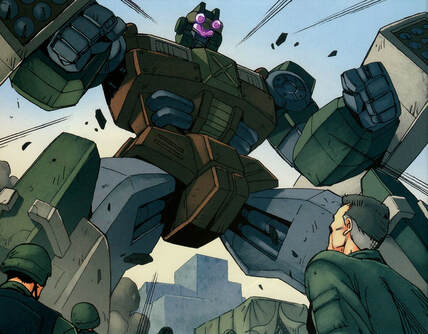 New bot just dropped.
But other than that, for all Guido is going all out (though second colourist Felix Serrano’s work is notably not up to the standard of Josh Burcham), this is a nothing issue, the battle is unengaging and without clear direction, but all without becoming offensively bad. Which at least would be memorable, I suspect many people would struggle to remember which moments are from this issue rather than the ones either side.

If this comic was a GIF, it would be Alan Partridge shrugging. Which really does not bode well for the finale.

But, if Cliffjumper managed to get one of the good parts of the issue, maybe an entire Spotlight of him will do better? Find out next week! 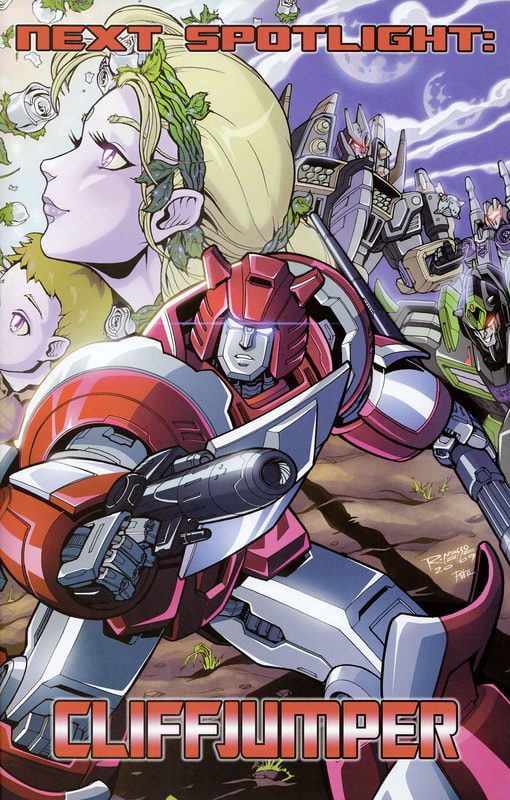