Didn't They hear, We Won the War, What do They Keep on Fighting for? 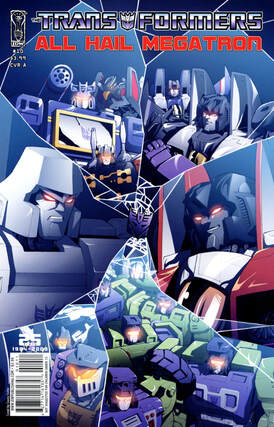 Let me put it this way, I’d rather face this than one of Kup’s drills.


If there’s a Revisitation drinking game, the word that will turn you into an alcoholic at the moment is “Frustrating”. I like to imagine my dedicated readers (both of them), desperately eyeing their empties going into this piece on the tenth part of this series, wondering if this will be the one that tips them over the edge into sleeping rough behind the bandstand in the park.

Though if you’re a reader of mine, you may be doing that already.

Someone not feeling any frustration is Megatron, who is extremely delighted about the Space Bridge Bombshell has built him in New York (where Guido Guidi is on art), to the point he’s even happy to talk about old continuity, cheerfully explaining all this was tec given to them by Sixshot (presumably via Jhiaxus), and what a wonderful opportunity for a one-off attack on the Autobots the hybrid Hunter made, one that Scorponok was a fool not to have realised.

And if Hunter’s happy ending in Maximum Dinobots was a dig at this series, I suppose it’s only fair McCarthy gets right of reply by mocking how dumb Furman’s villain was.

It’s also amusing in retrospect that Bombshell just builds a working Space Bridge, when later years will treat it as borderline magic technology that only Titans have access to unless you’re prepared to go for extreme reconstructive surgery linking you to other dimensions. 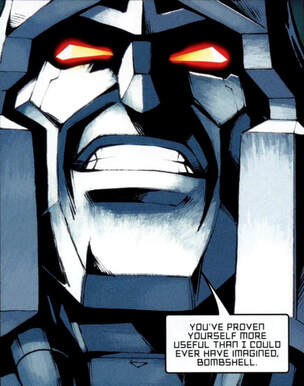 All hail Jimmy Hill.
So it’s understandable that Megatron is impressed by Bombshell, but not to the point he can’t see right through him, and as Starscream’s little group of malcontents come out (which definitely includes the Insecticons, but it’s not really clear if the likes of Blitzwing are doing a mutiny or just watching), which makes the leader repeat his remark that opened the issue: “And so it begins”, like he’s Kosh from Babylon 5.

Of course, Kosh said that at the end of season 1 of a 5 season story-arc, the point you should not have you characters declare “And so it begins” is the tenth out of twelve issues of a maxi-series.

On Cybertron, with art by Emiliano Santalucia, the Autobots are also preparing for a fight as the Swarm approach. Because it turns out Sunstreaker died for nothing as they forgot to blow up one of the bridges. Poor old Sunstreaker, he can’t even be a successful suicide bomber. Though it does give us a nice moment of Roadbuster being handed one of the Trion’s hull-mounted and clearly too big and dangerous to be used handheld and being very, very excited about it, to the point of wanting to give the gun a name. Which, for Time Wars rememberers, is a nice bit of misdirection as he’ll actually survive this.

More peculiar, is that off-page Prime has privately told Ironhide something incredible and secretive about the Matrix, something that shocks Red and makes him tell Optimus how much he respects him (which Prime points out, is a big difference from their first meeting where Ironhide’s reaction was loathing, setting up a story we’ll be seeing soon). Whatever this terrible secret is, it will never be mentioned or hinted at again, so that it comes alongside an clear bit of set-up for the immediate aftermath really shows how all over the place the editorial control was on this series now. 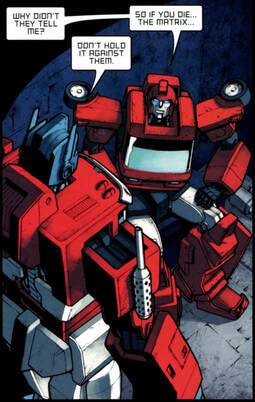 A secret he took with him to the grave.
But, we’re back to a nice moment as, as they prepare for battle, Tracks (clearly given his first line in the main series as a follow-up to his Spotlight) asks Prime if he’s scared, to which Optimus quips it’s better than a Kup drill.

On Earth, Megatron is frying tonight from a Shrapnel attack, and, assuming loyalties from which characters are standing behind which Decepticon, he has Soundwave on his team and Starscream has the inexplicably immediately fine and healthy after such a thing having been made of his death Rumble. I knew he was coming back, but not so soon, and after Soundwave had such a big cry over what happened, it’s hilarious that he and his cassette now seem to be against each other.

We’re mainly here for the speeches though, as Starscream bemoans he used to idolise Megatron, but now can’t stand how he’s done nothing since winning and has wasted all their potential.

Megatron on the other hand, responds that all this has been a test to see who cracks under the inactivity and to find out who really is loyal. And now he knows, with Starscream only having a few guys. But, he’s forgotten to count to the Constructicons, who are present, and Scrapper wants to tell everyone his favourite line from Michael Bay’s Transformers (2007), “All hail Megatron”. 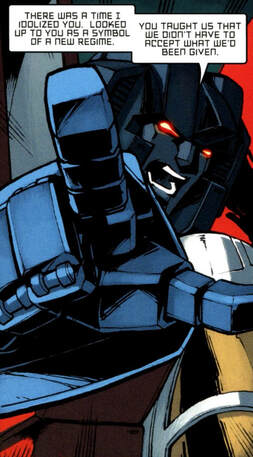 Nothing worse than a bitter breakup.
Starscream having lost all faith is actually a decent idea, but one we’ve seen already and recently as this is nothing but a rehash of his similar pissed at being relegated to nothing attempted coup in Devastation. What next, an unexpected attack by an outside force bringing the Decepticons back together again?

Speaking of rehashes of old comics, as the Swarm attack, Mirage saves Ironhide, which makes Red fight side by side with the guy he tried to kill. Which is very similar to a moment in the second Dreamwave miniseries, showing that poor old Mirage is always being unfairly judged and having to rebuild bonds in battle.

But, the Autobots are so outnumbered that defeat seems imminent...

Which is when Omega Supreme falls out of the sky in an amazing double page spread.

Turns out, Hot Rod’s distress signal did reach some real help, and when Prowl points out they were told all the Autobot outposts were destroyed and everyone killed, Omega explains his survival with “I am Omega Supreme”.

Whilst it’s a shame that this is the first we’ve heard the Autobots weren’t just beaten but all supposedly killed (something I’m not even sure Prowl could have been told considering they’ve been trapped on Cybertron since just at the attack started), especially as it will turn out that by some happy miracle no Autobot you ever heard of died, this is still a fantastic sequence. 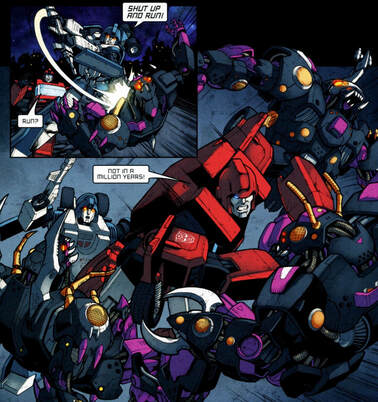 Friends again.
Not only is the art great, but so is Hot Rod’s glee at having gotten it right, and Omega basically boasting he has the fattest dick. If the intent with All Hail Megatron was to do a big Hollywood blockbuster style comic, this is the first time in ten issues it completely successfully pulls that off. It’s cheesy, it’s cliché, but it’s also ridiculously fun to see Omega Supreme curb-stomp an army of monsters as he saves the day.

And in what may be the only time a positive comparison between the two series goes the other way, unlike the Dinobots in the just finished Furman book, someone coming in to save the day was set up once, and done once. Not repeatedly.

And against all the odds, it actually feel euphoric as Prime orders Omega to transform and get them out of there (an unexpected Transformers: The Movie quote for him), it’s time to go to Earth.

On Earth, whatever else you think about him, you have to give Megatron a big hand.

Devastator’s hand that is, as the combiner tries to swat him. Megatron puts up a good fight though (oddly, none of his team join in), screaming that Devastator will need to show him a lot more if they want to take his position of power. 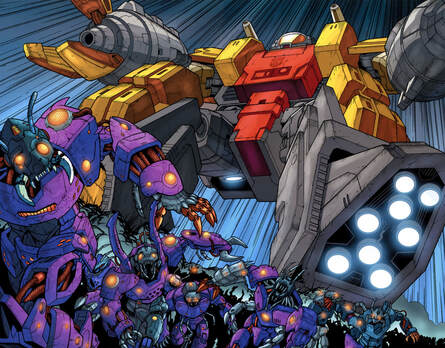 Swarm this.
Which is the moment a squadron of EU fighter jets show up.

Honestly, Starscream has no luck with the timing of his insurrections.

Which makes for the third issue in the series to end on a “The EU are going to nuke New York!” cliff-hanger. Who wrote this, Nigel Farage?

Well, you can save yourself from going behind the bandstand, frustrating is not really the word for this issue, well, except in the wider context of this series, where it should never have taken ten issues to get here. It’s also a very light issue, that only really has two scenes it cuts between and does not go near the Spike and Those Other Guys plot.

The Megatron side though, as much as it is a rerun of things we’ve seen recently, is perfectly adequate, with some solid motivation for Starscream. 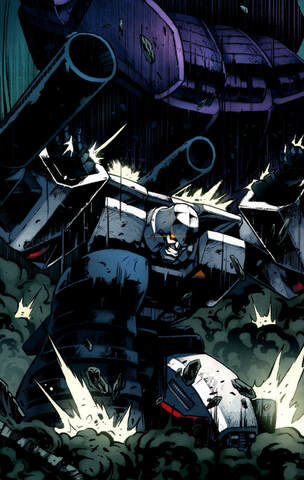 Guido carrying this series.
It’s the Autobot side of the issue that shines though, with some nice little character moments and, more importantly, Han Somega coming in and saving the day is just done brilliantly and is exactly what this series should have been from the start. Cheesy, but good cheesy.

Cheesy fun isn’t enough to counterbalance all the deadweight so far, but hopefully at least it might mark a turning point for the climactic issues, as I don’t really remember that much about them. My overall positive reaction might be a man dying of thirst at sea desperately gulping down salt water, but at this point, you take what you can get.

Next week though, will the trend for cheese continue into the penultimate issue? 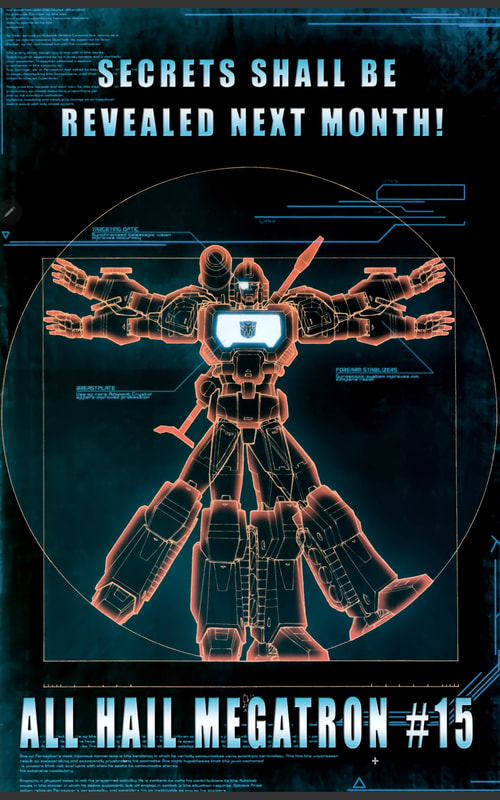