Memories Are Made of These. 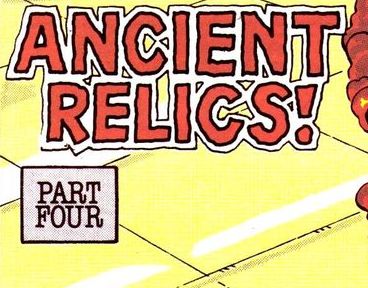 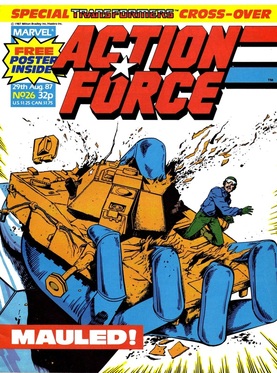 A joke—that’s all I am. A hopeless, helpless joke!


As I write this, I am still recovering from an extraordinary weekend, where I had the great pleasure of talking and chatting with not only Bob Budiansky in his first UK appearance, but also Furman, Lee Sullivan, Nick Roche, Stephen Baskerville, Guidio Guidi, Jose Delbo and many more, including several of you reading this now. I’ll be putting a YouTube video discussing my full thoughts on the event, but safe to say it was mind blowing. Why not look at my pictures HERE?

What is also mind blowing is that Part 4 of Ancient Relics!, an issue in the middle of a crossover Furman likely wasn’t hugely invested in and with only five pages to work with, still sees the author coming up with new and interesting ways of structuring his story. This playful, experimental side of Furman is something we’re more than used to seeing on the regular comic by this point, but more often than not the more Hasbro mandated issues tend not to excite him enough for them to benefit from it. Neither Second Generation! nor the forthcoming Worlds Apart! are as well thought out as this simple little toy promo winds up being.

The structural innovation here comes from each page being told from a specific character’s point of view as they remember something traumatic (with one exception) from their past that influences their decisions in the current situation. 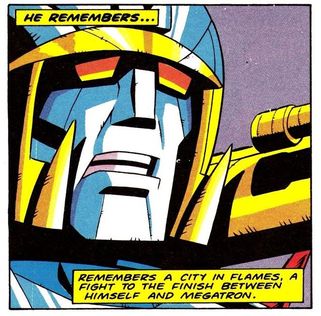 "Who am I again?"
So Flint thinks on sending the Maulers in and the deaths of those soldiers being his fault; Centurion remembers his prior fight with Megatron back in issue 76 and realises he really is a useless old relic; Grimlock reflects on the utter contempt with which he regarded humans and how meeting Action Force has changed that and made him even more determined to stop Megatron on their behalf and Wild Bill recalls the time in Vietnam where he had to leave one man behind to die and how he’d hoped never to have to do that again. But now Flint is ordering the gas tanks the fight has moved next to be bombed in a raid that will kill Grimlock as well as Megatron...

The one exception to this angst filled introspection is Megatron, who opens the issue remembering how much he loves ripping the shit out of things and as such he’s really enjoying treating the Maulers as chew toys. In Megatron’s world, every day of violence is a good day.

This is just lovely, with every page being perfectly crafted to form a little character piece whilst at the same time pushing the plot forward as their musings affect their actions, either here as in the case of Flint and Grimlock as they decide the time has come to finish this, or next week in the final part as with Wild Bill and Centurion. It’s a master class of economy of storytelling and plays the five page format to perfection. 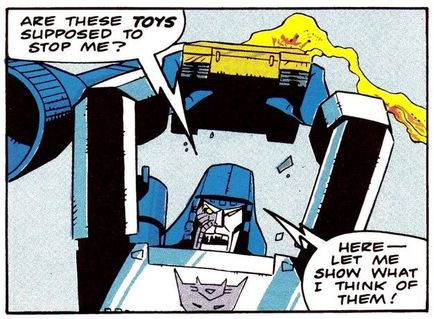 Ohhhhh, meta.
Even the flaws this week are relatively minor, and are basically centred on Centurion and the added confusion over this mark II model as he remembers things from the character’s first appearance whilst still not giving even the slightest hint that Professor Morris is in there. Bizarre.

One moment that does seem like a cock up but actually isn’t, is the idea of Wild Bill having flown in Vietnam (or “South East Asia” as it’s carefully called here), an unusual war for someone from Hull to have fought in. However, it turns out that in a previous issue a fact file on Bill actually specifically stated he’d been part of a pilot exchange program that had seen him take part in that war, presumably with a big butch Jesse Ventura lookalike prowling the mean streets of Hull with that big gun that spins round and round for a month in return.

This is, presumably, the result of whoever adapted the original G.I. Joe profiles of the characters to their new backgrounds realising that no one would remotely take the idea of Wild Bill being from Hull seriously due to him looking like the very cliché of a Vietnam pilot and as such this needed some smoothing over. It likely also reduced the need to remove references to Bill’s war experiences that might crop up in the American stories.

Inconsequential niggles aside, the scripting and Geoff Senior’s ever awesome art make this an incredibly strong instalment, and whilst reading it you can easily forget this is a book with less than six months to live as it feels more like a title on top of the world and ready to take down all comers. 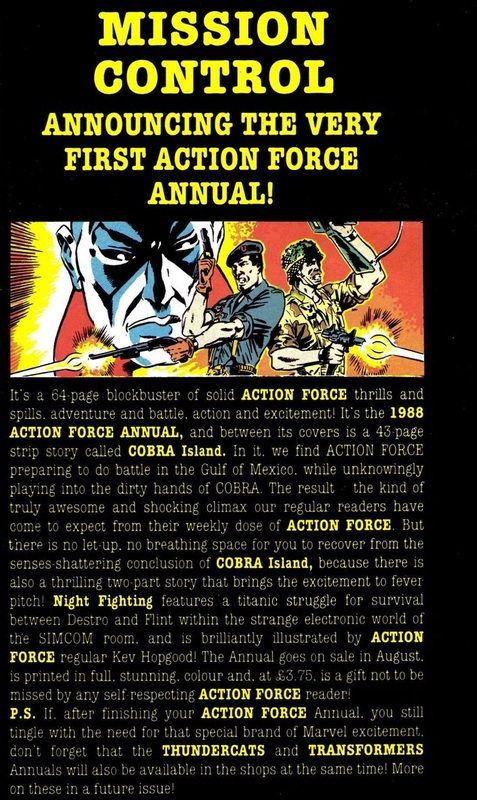 Note it's careful not to say Night Fighting isn't a comic story.
The rest of the comic is less assured. The big surprise of Mission Control is that it announces the very first Action Force Annual and that it will be out in August. In an issue published with just one week of August left to go. Considering the long lead in time and promotion Transformers has given to its 1987 Annual (though to add to the confusion over naming, the Action Force book is called the 1988 Annual here. Based on Tim Roll-Pickering’s research Transformers won’t adopt the “One year in advance” naming convention for its Annuals until 1989. Or 1990. Ohhhh... I’ve gone cross-eyed) this seems somewhat slapdash.

It’s also worth noting that unlike Transformers at this stage, the Action Force Annual is going to include reprints right from the off as American material covering the creation of Cobra Island from issues 40 and 41 is meshed together to create the book’s comic story, with the only original material being a text piece, ironically a sign of how the last couple of Transformers Annuals will work.

This is also a sign of the somewhat haphazard chronology of Action Force as the material in the Annual is from several months ahead of what’s being published in the comic, featuring as it does the father of Ripcord’s girlfriend, who barely gets introduced in this very issue. Quick readers can see things go wrong for the couple before they’ve even properly seen each other’s face. One just has to hope that things will wind up a bit more in synch by Christmas when most kids will be getting the book as a present.

As mentioned, the reprint of the second third of Celebration! introduces Bongo the Bear, a balloon seller who has their vehicle borrowed by Action Force as they chase after Fake Fred and his family and who will show Ripcord something he’s not expecting to see under their costume next week. Meanwhile Destro also sees something he’s not expecting whilst Scouting for Boys as it turns out the member of the Cobra Youth Brigade Bludd has put into place to assassinate Cobra Commander is someone he recognises called Billy...

This continues to be quite a fun story that shows off what Hama can do with a more low key adventure very well, mainly being helped by some nice gags (Mrs. Fred having a handbag full of grenades) and the gleeful silliness of the world’s greatest soldiers driving about with someone in a comedy bear costume.

The Master of Kung Fu backup sees... well I’ve still no idea to be honest. The villains have tricked everyone into thinking their making heroin when they’re really producing missiles. Or something. It’s a very involved saga by this point.

Mail Call! sees some more letters addressed to Joe’s (almost certainly from Transformers readers who just expect that sort of thing as normal) and also pimps out the Annual. However, the most telling thing that shows why this letters page isn’t as much fun as Grimgrams is the response to Andrew Bushen from Cambridge to his question about how tall Quick Kick is, being “A lot shorter if he ever crosses my path”. Note this isn’t a letter written to a character so the response isn’t an attempt to capture the voice of Cobra Commander or even Flint, it’s the editor not having a clue about the answer and deciding to be a dick about Quick Kick rather than, say, just making up a height for him as would likely happen with Grimlock.

To round things off we get a profile of Scarlett; a Mauler Poster; the rerun of the Captain Ric competition and a rather wonderful Codename: Combat Colin done entirely in rhyme that will put a big silly grin on the face of every reader. It’s also the first example (that we’ve come across anyway) of a Colin story ending on a cliff-hanger, something that will become more and more the norm.

Next Wednesday the crossover ends with a bang, but before that on Friday we have the second and final in our series of “Transformers stories with titles that riff on Indiana Jones films” as Buster Witwicky faces the Car Wash Of Doom. 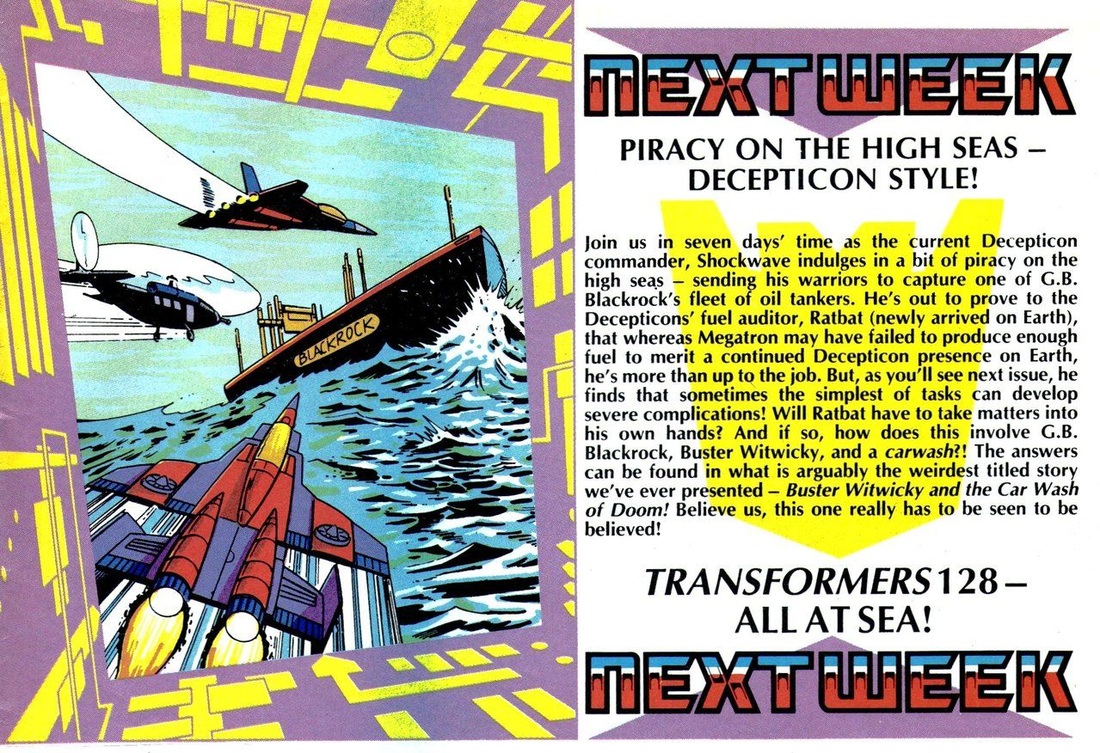 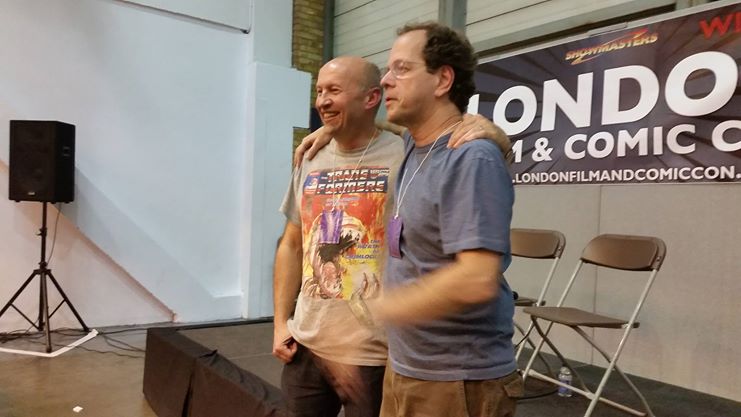